Constitution and By-Laws of the Cadets of Temperance 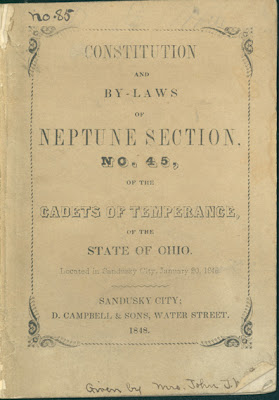 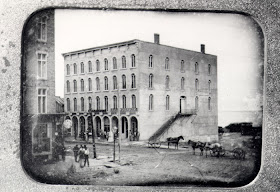 Article II of the Constitution of the Cadets of Temperance read:

No member shall make, buy, sell, or use any spirituous or malt liquors, wine or cider, except they be administered to him for medicinal purposes, by his parents, guardian, or physician; nor shall he use tobacco in any form.

The Rules of Order were quite strict: 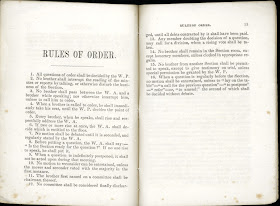 The leader of the Neptune Section of the Cadets of Temperance was to be a member of the Sons of Temperance, and he was known as the Worthy Patron. The Cadets were to be young men between the ages of ten and seventeen years of age. However, boys of other ages and young ladies were allowed to be elected to honorary membership. In an 1867 letter, Mark Twain wrote that he once joined the Cadets of Temperance, but left after only three months of membership. (He liked the scarves they wore, but not their strict morality!)

In 1849 a meeting was held at the Congregational Church for the purpose of organizing a Temperance League for the ladies of Sandusky. There were nineteen women who were active members, and five women who were supporting members. Later their group became a chapter of the W.C.T.U., the Women’s Christian Temperance Union. To learn more about the history of temperance activities in Sandusky, see chapter 26 of A Standard History of Erie County, by Hewson L. Peeke.
Sandusky Library Archives Research Center at 11:58 AM
Share