The Sandusky Library Archives Research Center has a collection of about 10,000 photographic images documenting many facets of the history of Sandusky, Erie County, the Lake Erie islands, and the Firelands region. Nearly all of these pictures have been donated to the library over the last 100+ years by local residents, former residents, and the historically-minded. However, some of these images have lost their 'stories' -- the names of the people in them have been long forgotten, the event depicted has been lost from memory, or we aren't sure anymore where or why the picture was taken. Nevertheless, these images are still important to us in helping to describe the early days of the community and culture. 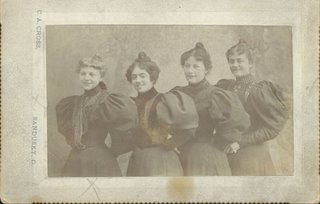 The names of the women pictured above are unknown to us. What we do know about this image is that it was taken by the C.A. Cross studio in Sandusky. Charles Cross operated a photography business on Columbus Avenue in Sandusky from about 1880 until the late 1890s. We don't know the ladies' names, but they still can tell us things about life in the late nineteenth century. Does this photo tell you anything?

The Archives Research Center has a number of cartes-de-visite, which were used as photographic calling cards in the early days of print photography. (The peak years of the carte-de-visite were roughly from around 1860 to the 1880s.) Here is a sample of cartes-de-visite from the library's collections. Again, the names of the people and the story of their lives is unknown, but their images still can tell us something. 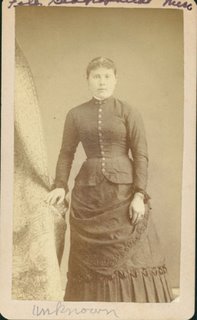 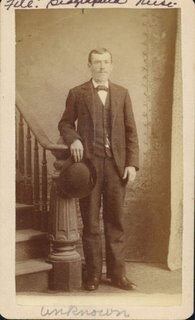 Both of these images were taken at the Wetherell Studio in Sandusky, probably in the mid-1880s.

(We will have more about the early history of photography -- and mystery photos -- in later entries.) 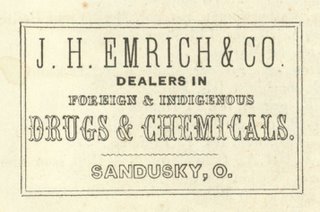 Our featured site in history is the Emrich Brothers Apothecaries, later known as the Emrich Drug Store. It was located at 118 Columbus Ave., on the west side, between Market and Water Streets, and operated from the 1850s until the first decade of the twentieth century. Born in Bavaria, James Emrich opened his store in Sandusky probably around 1853; his brother Phillip came to Sandusky and joined him in the business in 1863. However, Phillip died in 1876, of "hemorrhage of the lungs," at the age of only 38.
Here is a portrait of James Emrich, taken probably when he was in his sixties or early seventies (in the 1890s): 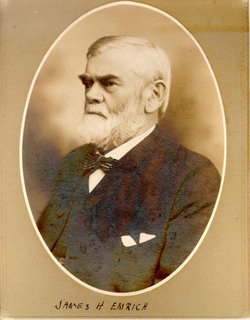 James Emrich ran his pharmacy for over fifty years, closing down the store only a few weeks before his death at age 80 in 1909. The Sandusky Library Archives Research Center possesses documents from the business, including ledgers from the 1860s and 1870s, and a folio book containing handwritten formulas for medicines and other products. Here is a sample of a page from one of the ledgers (notice the orders for whiskey for medicinal purposes): 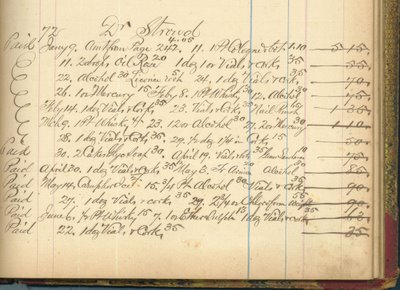 You can find other life stories in the historical collections at the library.
Posted by Sandusky Library Archives Research Center at 3:26 PM No comments:

Did you know that there was a ship of the United States Navy named after the city of Sandusky? Actually, there were two ships called the USS Sandusky. The first was an ironclad steamer, built in Pittsburgh during the Civil War and launched in 1865. The first USS Sandusky did not serve for very long -- it was sold for scrap in 1873. (It is not known whether any images of this ship exist.)

The second USS Sandusky (PF-54), a Tacoma-class frigate, came into existence during World War II. Commissioned at New Orleans in 1944, the Sandusky served in the Pacific on convoy duty and submarine patrols through March 1945. In July 1945, the Sandusky was decommissioned and loaned to the Soviet Union under the lend-lease program for four years. From 1953 until 1970 (when it was scrapped), the ship known originally as the USS Sandusky served the government of Japan, now an ally of the United States.

Email ThisBlogThis!Share to TwitterShare to FacebookShare to Pinterest
Labels: US Navy, USS Sandusky

No TV, No Internet, No Video Games 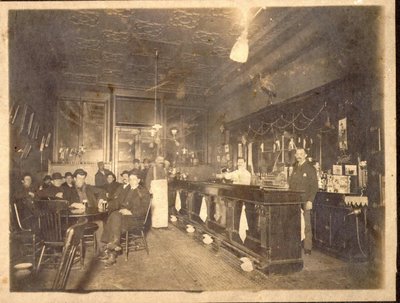 Have you ever heard kids (or yourself) wonder what people did before there were movies, television, computers, or even radio? Going to the neighborhood saloon for a beer was one of the more common social activities in the nineteenth century. Here is a view of some men having a drink at an unidentified saloon on Water Street in 1889. It's impossible to guess which saloon this is, because in 1889 there were forty-one saloons -- on Water Street alone!!! That's right -- the neighborhood saloon was in every neighborhood back then. Sometimes there were more than one on a block. (For example, in 1889, Adolph Ernst had a saloon at 202 Tiffin Ave., and George Ferback operated one at 210 Tiffin Ave.) The 1889 Sandusky city directory lists 181 saloons in the city.
The saloon was a place where men met to socialize with their friends and enjoy a beer, and maybe even get something to eat, just like they or their fathers or grandfathers did in the "old country" (most likely Germany).

This image probably represents a typical scene in a neighborhood saloon of the era: men who may have just finished work for the day, gathered together to talk about their day and the world they lived in. Note the spittoons and hand towels at intervals along the bar, and the hearty, dark beer that was common then. (None of that wimpy pale beer, like we drink today!)

While most saloons were small neighborhood operations, some were a bit more elaborate. Louis Zistel was proprietor of the Atlantic Garden Saloon (sometimes identified as the Atlantic Pleasure Garden) on Meigs Street (near where the city building is today). You can see a bowling alley in the foreground of this picture of Zistel's saloon. 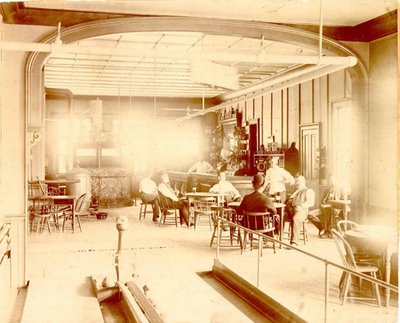 Zistel also operated a boat yard and (briefly) an aquarium, where visitors could view aquatic life through glass in a tank twelve feet deep and one hundred feet in circumfrence.
Posted by Sandusky Library Archives Research Center at 3:00 PM No comments: 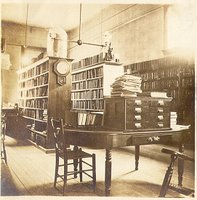 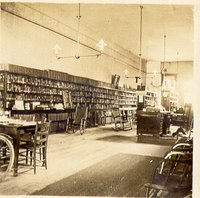 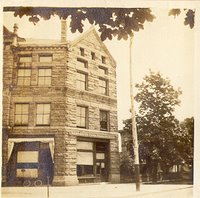 from 1896 until 1901, when what is now the Carnegie wing of the present library was opened. Today's Sandusky Library has served the community at its present location for over 100 years, with expanded facilities for the 21st century.
Posted by Sandusky Library Archives Research Center at 12:07 PM 2 comments: