When Sandusky’s City Building was on Market Street 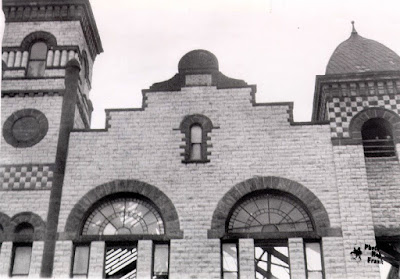 The building which began as Sandusky's Central Police and Fire Station building in 1890 served as 's from 1915 until 1958. Local photographer Robert E. Frank took several pictures of the former before it was razed in 1958. In the picture below, several businesses along are visible, including Gray Drugs, Weber's Men's Wear, and Herman's Jewelers. 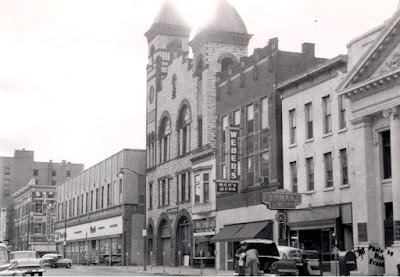 In a closer view, you can see the words "" above the large doors on the street level. The lower level of the building originally housed horse-drawn vehicles for the city’s police and fire departments. 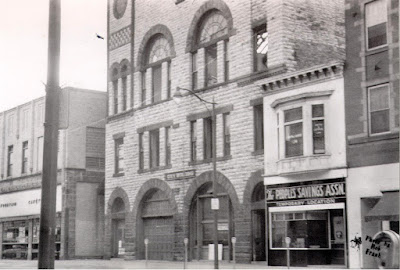 You can see the old city building in this picture postcard, which was taken from looking east. 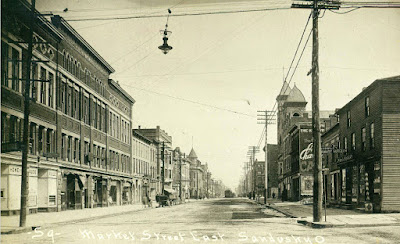 An image of 's former city building graces the cover of the Old House Guild's Downtown Architectural Walking Tour of Sandusky.
Posted by Sandusky Library Archives Research Center at 9:14 AM No comments:

First Anniversary of the Buckeye Business and Telegraph College 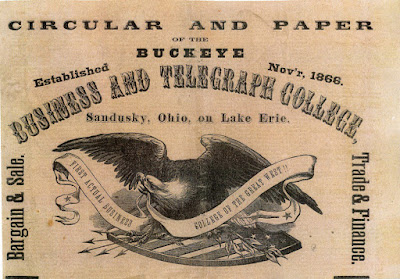 A lengthy article in the November 27, 1867 issue of the Sandusky Register reported on the first anniversary celebration of the Buckeye Business and Telegraph College. The school was founded in Sandusky by Professor E. A. Hall, and began as the Buckeye and Great Western Business College. Eventually the name was changed to Sandusky Business College. In the 1860s the school was located at Union Hall, on Columbus Avenue, between Water and Market Streets. The first anniversary celebration was held at Donahoe’s Block, with the Great Western Band providing musical entertainment. A.C. Van Tine, proprietor of the college, called the audience to attention.  M.F. Cowdery, the superintendent of Sandusky City Schools, gave an address. 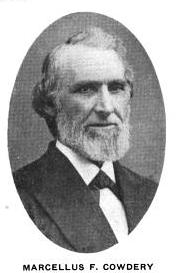 The Register article summarized his remarks: “He said that next to religion, morality and intelligence must be ranked the claims of trade and commerce of the world. He referred to the effects of commerce in settling new countries, opening seaports and stimulating enterprise. He alluded to the fact that our American Independence was achieved in a war begun on account of commercial oppression, and closed by discussing the importance and value of a strict and unyielding integrity in all the walks of a business life. He paid a very handsome tribute to the energy and enterprise of the proprietors of the Buckeye College, and foresaw for it a career of great usefulness to the young of our city.”

During the evening’s program business students presented Professor Jarrett with a Webster’s Unabridged Dictionary. Lieutenant Governor John Lee spoke to the audience, advising them: “You do well to patronize and encourage an enterprise so fraught with good to the youth of your city.” Mr. John Delamater presented a gold-headed cane to Professor S.P. Hare. Rev. W.D. Godman of Cleveland told the audience that education was important not only for business, but for any vocation to which one is called. Judge Taylor pointed out that the prospects for the winter term were promising, as a large number of students had already enrolled. The evening concluded with the presentation of the engraving “Irving and His Friends” to Mr. A.C. Van Tine.

The college had a variety of locations and proprietors throughout its existence. The last proprietor of the Sandusky Business College, then located in the former residence of Rush Sloane on Adams Street, was William O. Loudenslagel. The college closed in 1949, due to declining enrollment.

J.J. Dauch, co-founder of the Hinde and Dauch paper company, graduated from Sandusky Business College, and at one time owned the college. Hinde and Dauch was known for hiring graduates of the local school. For over eighty years, The Sandusky Business College and its predecessors played an important role in training young people for their careers in banking, finance, and many manufacturers in Sandusky.
Posted by Sandusky Library Archives Research Center at 10:00 AM No comments:

Menu from the Townsend House from 1850 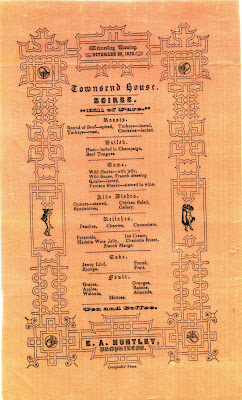 Pictured above is the “bill of fare” from the Townsend House for the evening of November 20, 1850. At this time, E.A. Huntley was the proprietor of the hotel, which was located at the northwest corner of Market and Decatur Streets. Roasts at this meal included spiced round of beef, boned turkey, roast turkey and larded chicken. Four different types of cake were offered for dessert, along with a variety of fruit. The menu was printed on cloth by Campbell’s Press. 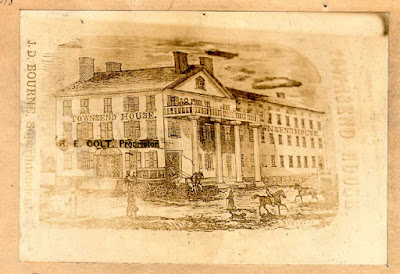 From the 1930s through the 1950s, the hotel was known as the Chittenden House. The hotel building was razed in 1961 by the Sandusky Foundry.
Posted by Sandusky Library Archives Research Center at 10:00 AM No comments: 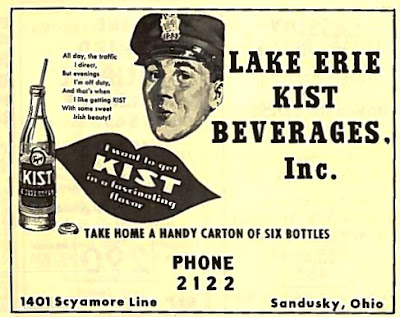 From about 1947 to 1958, Lake Erie Kist Beverages was in business in Sandusky, Ohio. Most of the time that the franchise was in town, it was located at 1401 Sycamore Line, where the Sandusky Paint Company is now located. In November of 1947, Kist Beverages was among the many sponsors of the Amvets Hour on Sandusky’s new radio station, WLEC.  Auditions for the program, which featured amateur performers, were held on November 15, 1947 at the auditorium of Sandusky High School, now known as Adams Junior High. 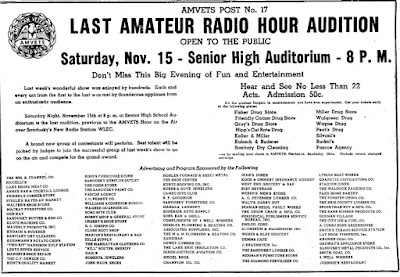 An article in the November 9, 1956 issue of the Sandusky Register Star News stated that Kist beverages came in twenty different flavors, including orange, root beer,  cream soda, strawberry and grape. John Routh, Jr. was the president of the company, which was franchised nationally. In 1956, over two thousand bottles were processed at the Sandusky bottling facility, and were transported to 492 customers in an eleven-county region in Ohio. Lake Erie Kist Beverages sponsored an athletic scholarhip, a marbles champion, and a bowling team. A sign on the company read “Get Kist for a nickel.”  This slogan was also printed on a bottle opener that was given away by Kist, now in the collections of the Follett House Museum.

A Kist beverage bottle is among the several vintage soda bottles in the Industry Room at the Follett House Museum. 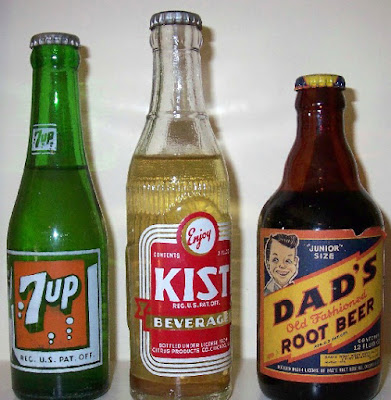 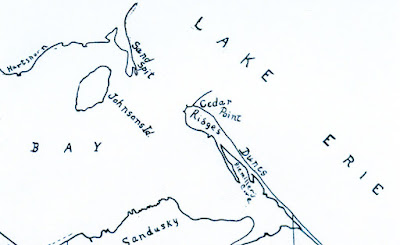 Now a part of Cedar Point and the Causeway, Biemiller’s Cove used to be a popular fishing spot for area residents. Charles E. Frohman wrote in Sandusky's Yesterdays that small cottages were built along the cove, and were accessible by sailboat or rowboat in the late 1800s. In 1882 the steamer R.B. Hayes transported people from Biemiller’s Cove to Cedar Point. Pictured below are two rowboats in the cove. 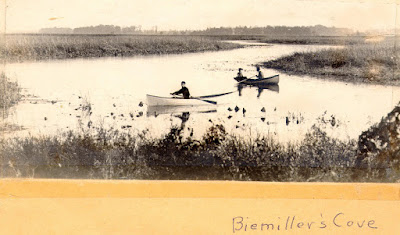 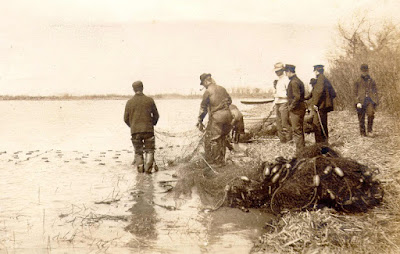 To read more about Biemiller’s Cove, see Sandusky's Yesterdays by Charles E. Frohman, or E.L. Moseley’s article on Sandusky Bay and Cedar Point. Inquire at the Reference Services Desk at the Sandusky Library to see these items.
Posted by Sandusky Library Archives Research Center at 9:00 AM No comments: 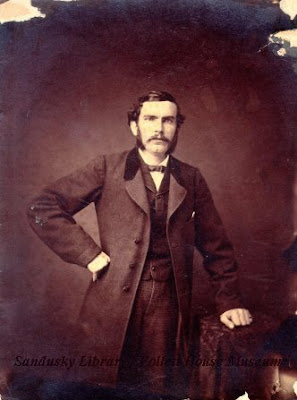 David H. James was the son of Thomas and Frances James, early settlers of Bloomingville in Oxford Township of Erie County, Ohio. In the Fall of 1861, after civil war had broken out in the nation, he enlisted in Company G of the Ohio 72nd Volunteer Infantry, reaching the rank of First Sergeant in his unit. He was discharged from the Army in August of 1862 on a Surgeon's Certificate of Disability. A Civil War pension card indicates that by May 28, 1863, he was considered an invalid. 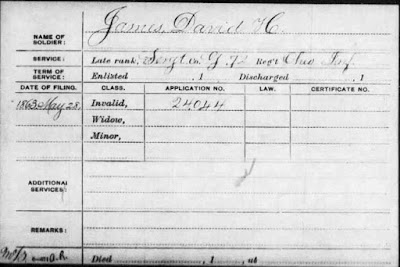 After he had recovered, Sergeant James enlisted in Company G of the 145th Ohio Infantry on May 12, 1864, and was named a Captain. He mustered out of the 145th on August 24, 1864. Sadly, he died in early September of 1864, when he was not yet thirty years of age. Capt. James was buried in the Bloomingville Cemetery.
Posted by Sandusky Library Archives Research Center at 8:00 AM No comments:

The football team at Sandusky High School is having a successful season this year -- just a few days from a second-round playoff game, at the time this was published. This has been one of many good years for SHS football over the past 120 or so years. 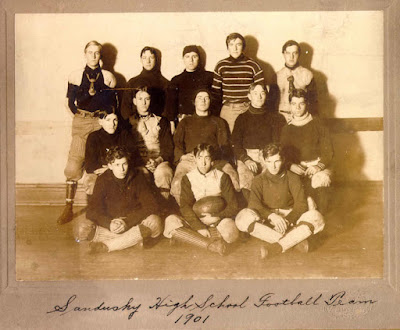 Sandusky students played their first football games in the 1890s, but it appears that these teams were at more of a club-level rather than varsity, playing whatever nearby teams were available; records of those games are not readily available. What we might call varsity football began in 1901, when the team pictured above defeated Norwalk and Cleveland West High Schools, while losing to Toledo Scott in a three-game season. Judging from the picture, they may have been a somewhat disorganized bunch, with no standard uniforms. 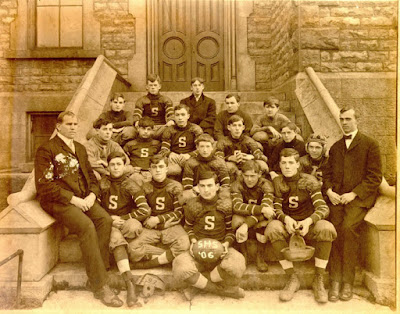 Sandusky's first undefeated football season was in 1906, when the team won five games without allowing a single point! 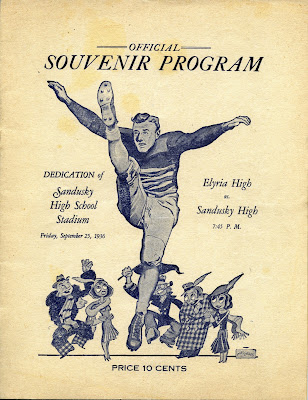 The 1930s was a great time for Sandusky football, with winning records every year, including five undefeated seasons. The remodeled and expanded stadium (Strobel Field) was dedicated in 1936. 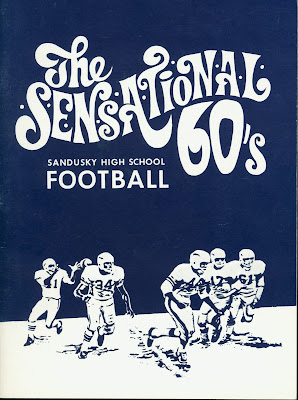 Many still remember the "Sensational 60's," when Sandusky football seemed nearly unbeatable, and produced future stars in both the playing and coaching ranks, as well as politics and other professions. 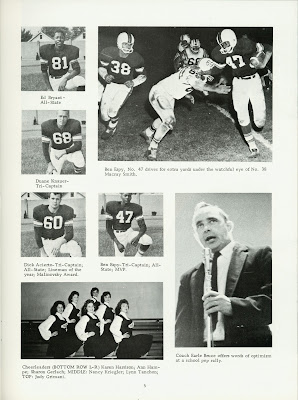 Do you recognize number 75 in the picture below? He is Sandusky's Pro Football Hall of Famer Orlando Pace, with his 1991 Junior Varsity squad. 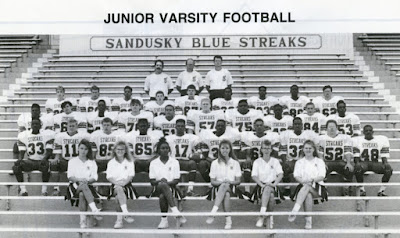 The Liberty Party in Erie County 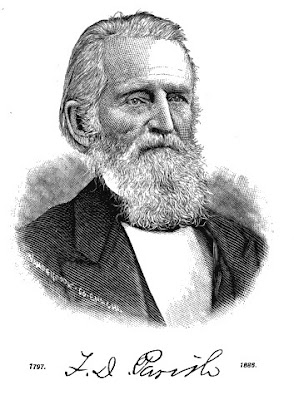 According to the Firelands Pioneer, attorney F.D. Parish was the unsuccessful candidate for the Liberty Party in the 1844 Election. He had hoped to be elected to the 28th U.S. Congress. Hewson L. Peeke wrote in his book Standard History of Erie County, I (Lewis Pub. Co., 1916) that Parish helped to organize the Liberty Party in Erie County. This announcement appeared in the Sandusky Clarion on September 26, 1845. “Liberty men” were instructed to assemble at Berlin Center on October 10, 1845, for the purpose of renewing and increasing the efforts to redeem the country from “the disgrace of the system of American slavery, and to extend the blessings of liberty to all the people of the land.” 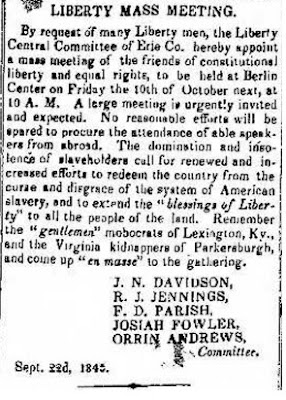 The names of the members of the Liberty Party in Erie County were listed in the May 28, 1849 issue of the Sandusky Clarion. They were:

Several of the individuals whose names were listed as members of the Liberty Party in Erie County were also active participants in the Underground Railroad, the loosely knit network of people who assisted fugitive slaves to reach freedom in Canada
Posted by Sandusky Library Archives Research Center at 9:30 AM No comments: