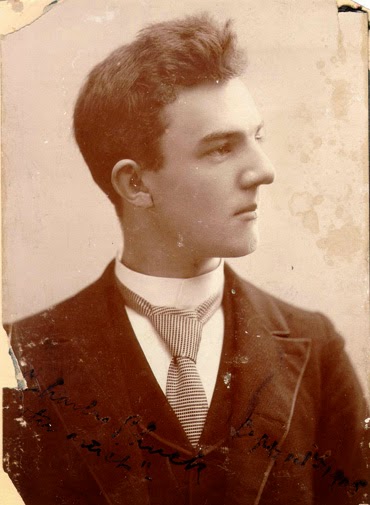 Charles Francis Schuck was born in Cumberland, Maryland in 1868, to Mr. and Mrs. George E. Schuck. When he was seventeen, he moved with his family to Sandusky, Ohio. An article in the April 8, 1916 issue of the Sandusky Star Journal stated that Charles was born with a gift for painting. Charles was mentored in his artistic studies by Mrs. John Hudson, who taught many young artists in Sandusky in her later years. Several of the paintings by Charles Schuck featured scenes from the Lake Erie Islands area.  This Schuck painting of a young woman in a rowboat is on the wall of the Industry Room of the Follett House Museum. 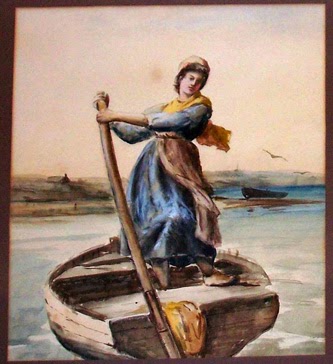 Mr. Schuck’s painting Shoreline is included in the Sandusky Library’s Art Walk, a self-guided tour of the library’s art collection. 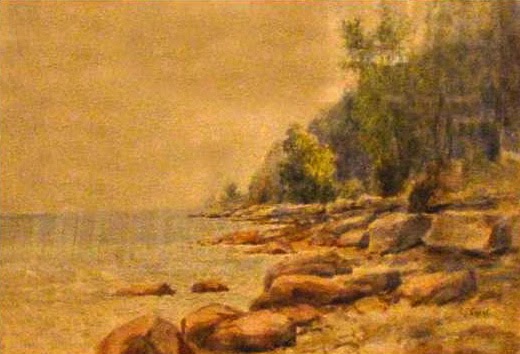 This lovely water color scene of a wooded path in fall, entitled Autumn Road, is found in the Sandusky Library Archives Research Center. 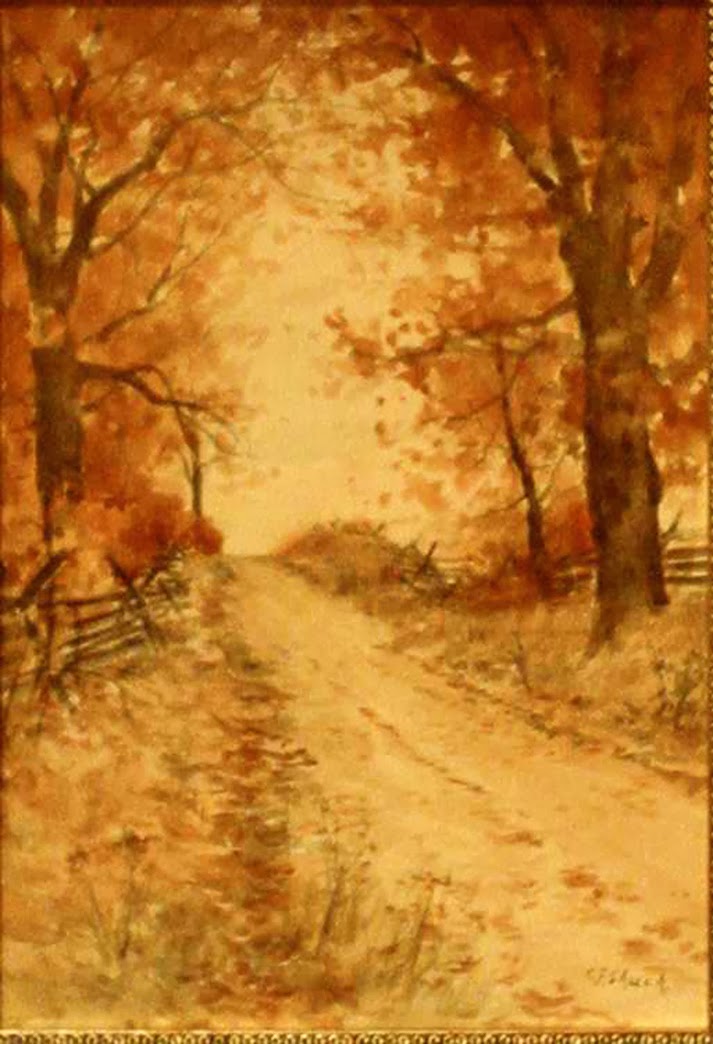 Tragically, when he was only 28 years of age, Charles Schuck died during a yacht race on July 4, 1896. A storm suddenly hit the lake, and Charles was knocked overboard from the yacht Shamrock and drowned. He left behind a wife and young child, and his promising career as an artist was cut short. To see several paintings by Charles Schuck, visit the Sandusky Library and the Follett House Museum. Inquire at the Reference Services desk if you would like to view the self-guided Art Walk of the Sandusky Library’s art collection.
Posted by Sandusky Library Archives Research Center at 9:00 AM No comments: 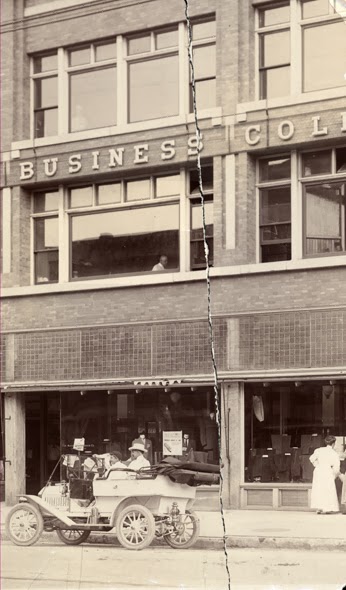 photographer E.H. Schlessman took this photograph of a portion of the in 1910. Though the picture is torn, it is interesting to see a slice of life from an earlier time in our community. From about 1910 to 1915, the Mayer Lebensburger Company, which sold men’s clothing, and the Sandusky Business College both were in operation in the on . The Mayer Lebensburger store occupied the street level of . The held classes on the third floor of the , which only had three stories at that time. The automobile in from the Mayer Lebensburger store had a convertible top, and the tail light and headlights were lanterns, possibly fueled with kerosene. 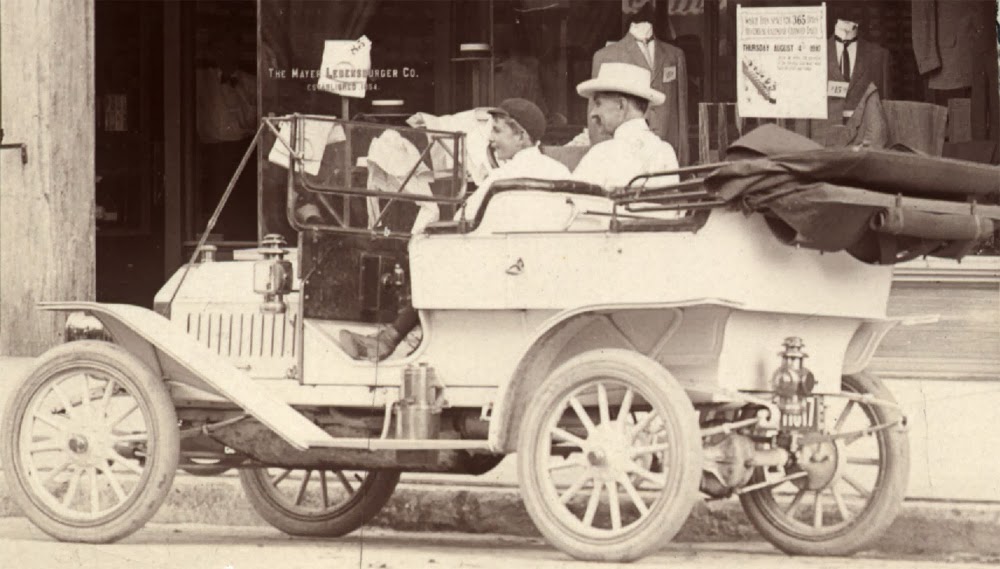 The poster in the store window was advertising an event to take place on Thursday, August 10. The lady pictured below is looking at another poster in the men’s clothing store, where several pairs of trousers are displayed. 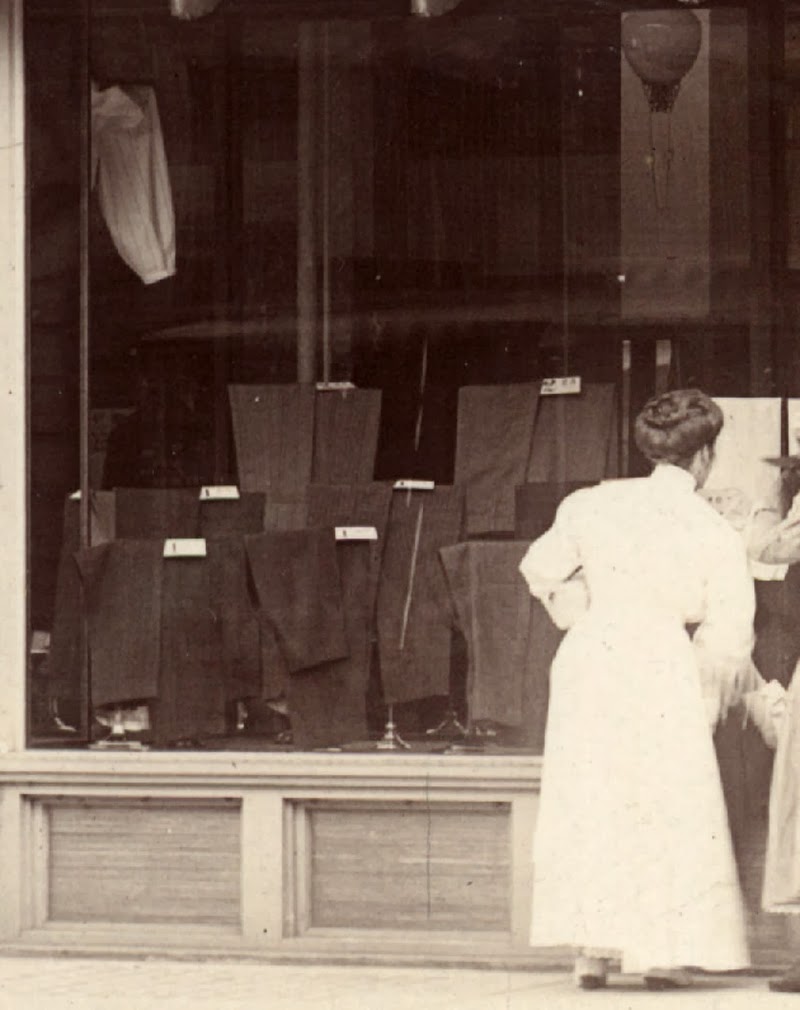 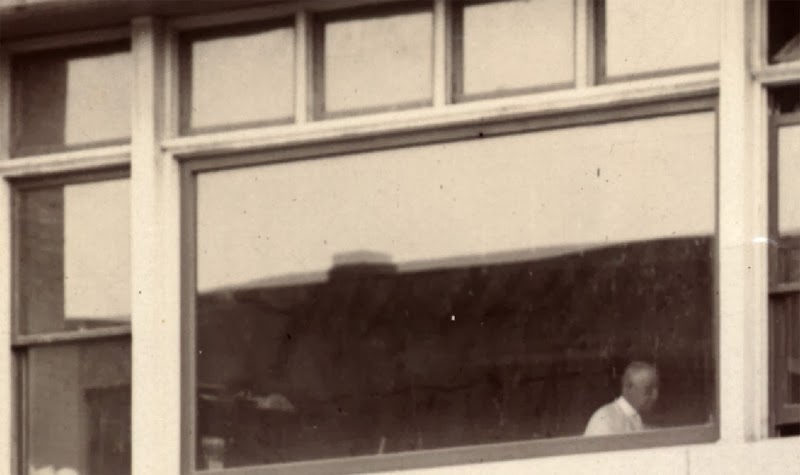 By 1916, the Mayer Lebensburger Company went out of business, and the eventually moved to . Of course, the later had a total of eight stories, and many other businesses were in operation there. The Citizens Banking Company was in business at the for several decades. Because of the generosity of many donors, the has a rich collection of historic photographs, scrapbooks, books, and other primary resources which help us learn about the past residents of and .
Posted by Sandusky Library Archives Research Center at 11:10 AM 2 comments:

"It's Kleenex Time in America" -- Including Sandusky 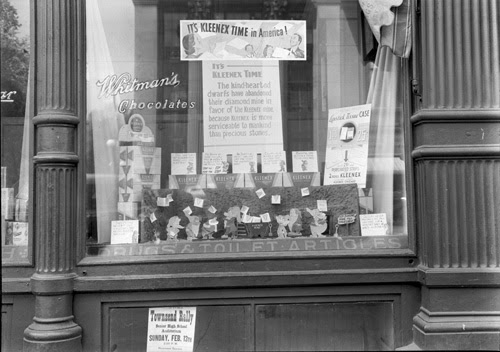 In 1938 the window of the Bechberger and Kubach drugstore in the Sloane House in downtown featured a display entitled “It’s Kleenex Time in .” The display showed the Seven Dwarfs explaining why they liked Kleenex. Snow White and the Seven Dwarfs, an animated movie produced by Walt Disney in 1937, was still very popular in the at that time. In the display Doc said “Don’t  put a cold in your purse – use Kleenex.” Happy was happy about the price of Kleenex, which in 1938 was 13 cents for a package of 200, or 28 cents for a package of 500. Dopey said “I’m dopey because I was the last one to get the Kleenex habit.” The sign by Grumpy read, “Grumpy is so pleased with Kleenex  that he intends to smile soon.” 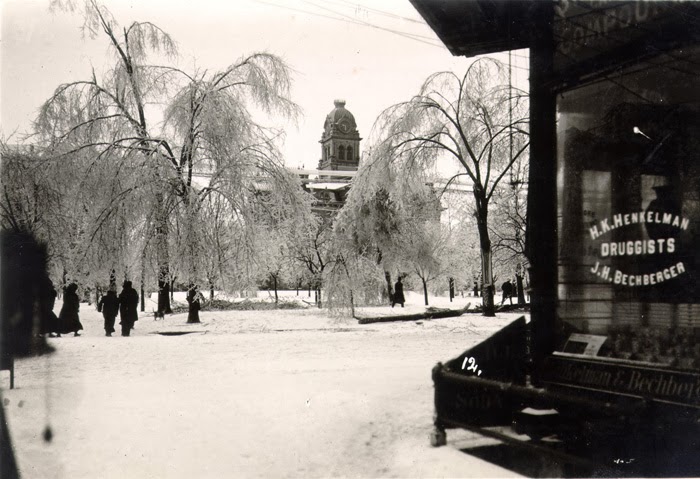 Posted by Sandusky Library Archives Research Center at 10:45 AM No comments: 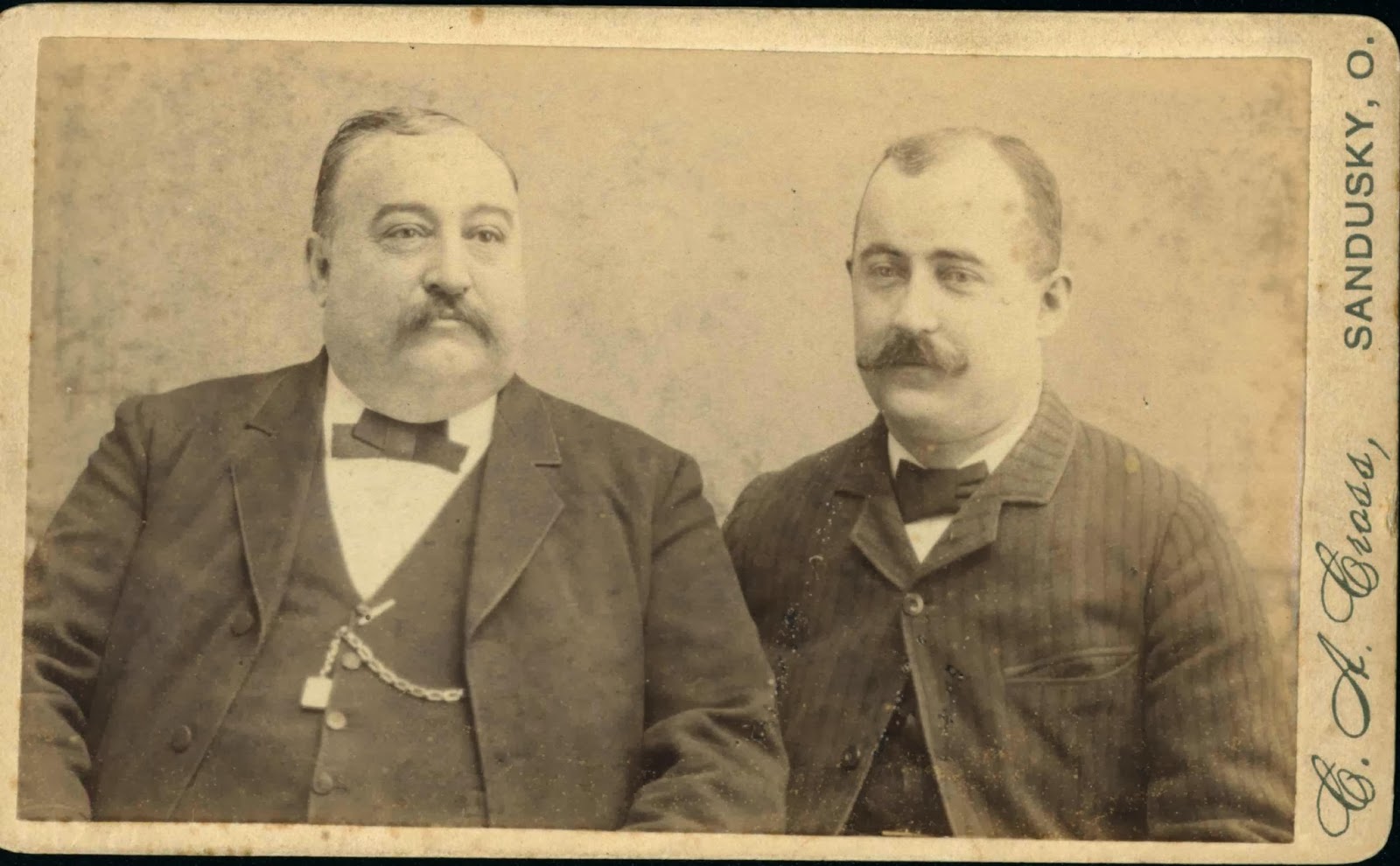 The 1882 Sandusky City Directory lists Henry Eichler and Charles A. Lehrer as manufacturers and dealers of German roots and herb bitters. (Unfortunately, we do not know which man is Mr. Eichler and which is Mr. Lehrer.) Their business, Henry Eichler and Co.,  was located at in . photographer C.A. Cross created this advertising card, now housed in the . 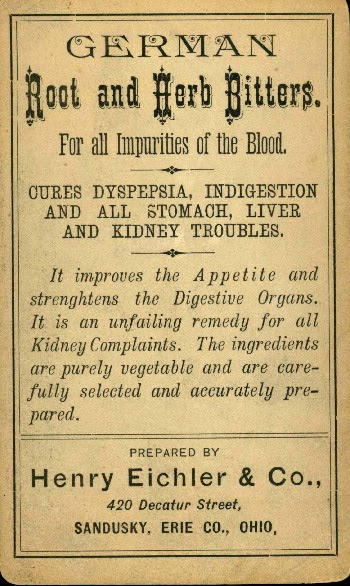 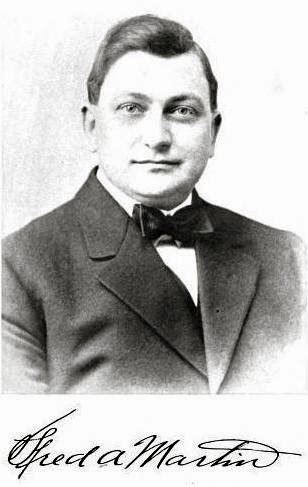 Fred A. Martin was born in on January 27, 1882 to Mr. and Mrs. Julius Martin. The Martin family came to the when Fred was a youngster. After residing for a time in , the family moved to in 1901. As a young man, Fred worked as a glass worker, along with his father. In 1905 he married Alpha Steen, and they had two sons, Fred A. Martin, Jr. and Harry Martin. In 1910 Mr. Martin began a confectionery and ice cream business on the west side of . By 1915 Martin’s Confectionery had moved to the Cooke Block at the northeast corner of and . You can see the name Martin’s under the small clock on the right side of this 1931 photograph of downtown . 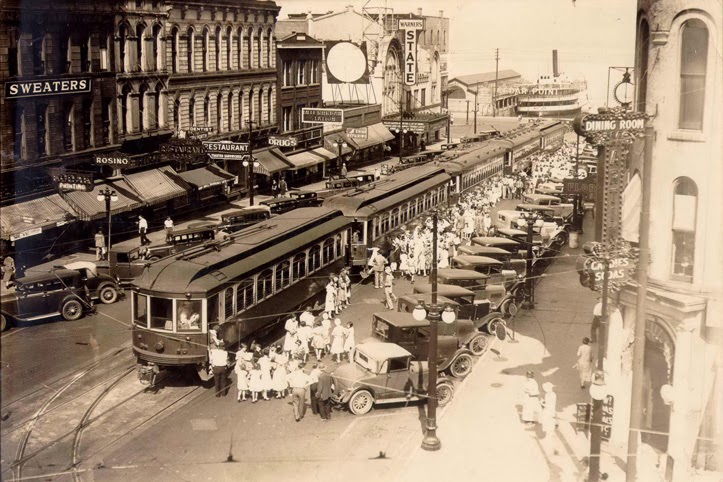 In the 1916 Sandusky City Directory, Martin’s Confectionery was listed as a wholesale and retail ice cream manufacturer, with a full line of bakery goods and confections. Martin’s also featured a dining room. Local residents often called upon Martin’s for catering large parties and family gatherings. In 1921, Mr. Martin gave up the wholesale ice cream business, and focused on making candy. A separate manufacturing plant for Martin’s was located at during much of the 1920s and 1930s. This advertisement, which appeared in the Sandusky Star Journal on February 12, 1923, encouraged customers to purchase their Valentine’s Day treats from Martin’s. 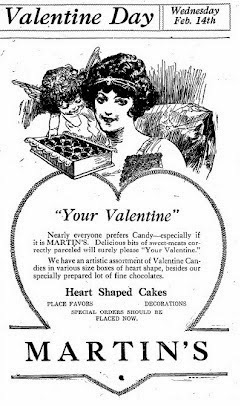 Heart shaped cakes and a variety of fine boxed chocolates were popular at Martin’s for Valentine’s Day in 1923.

On September 25, 1939, Fred A. Martin died, following a lengthy illness. A lengthy obituary for Fred A. Martin, Sr. appeared in the September 26, 1939 issue of the Sandusky Register. Fred Martin had been known as a “booster” of , and his business was well respected in the area. Following his death, Mr. Martin’s wife and sons operated Martin’s Restaurant at . 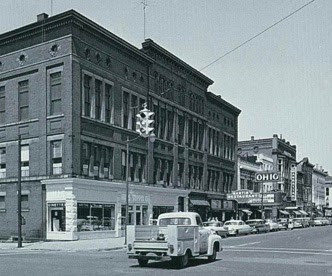 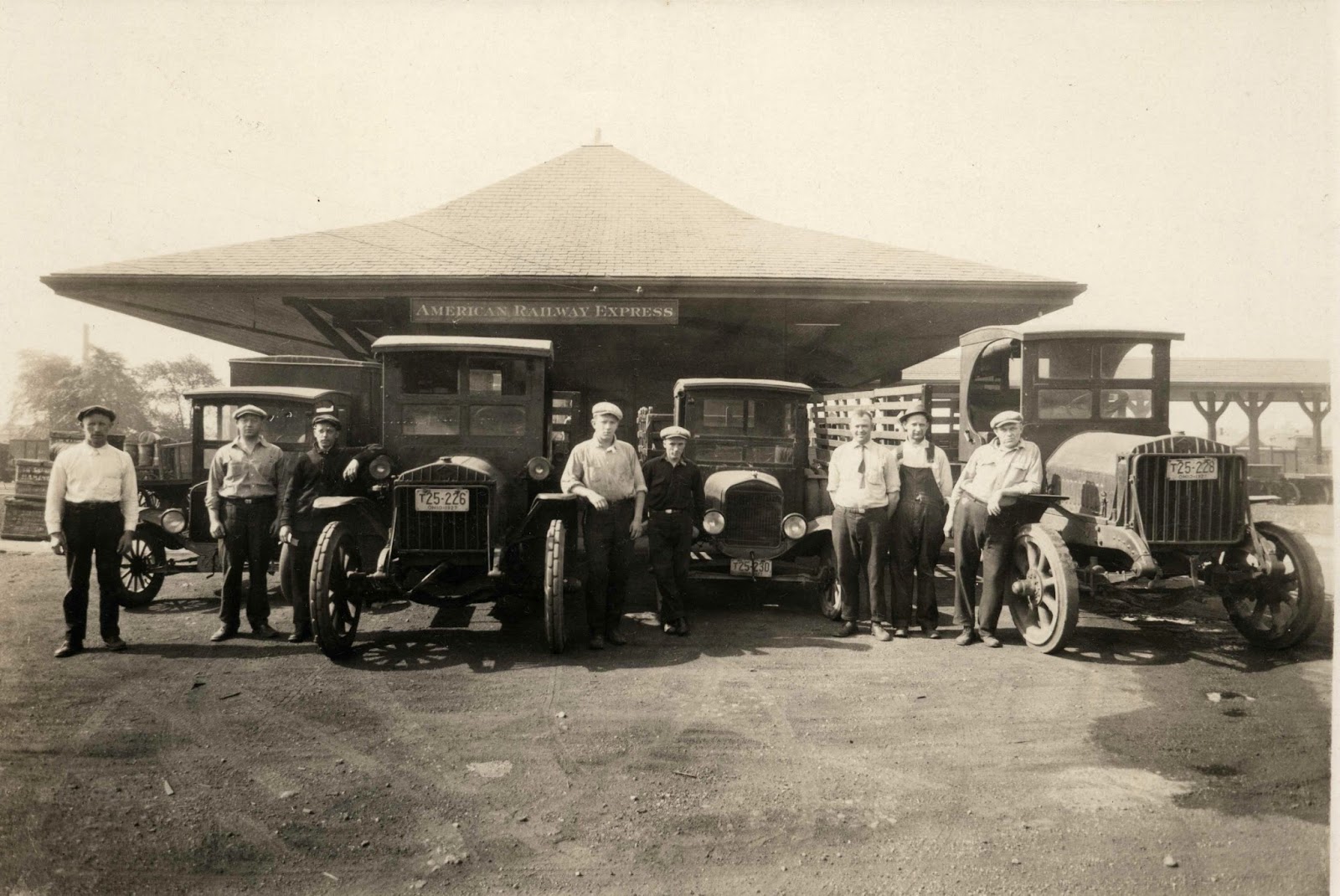 Pictured above are several employees of the American Railway Express Company in 1927 near the New York Central Railroad Depot.  At that time, there were two offices of the company in Sandusky, one on East Water Street, and one at the New York Central Railroad’s passenger depot, located on the south side of North Depot Street, between Hayes Avenue and Camp Street. The only individual who has been identified is Chester Piper, who is the fourth individual from the right. In the picture below, you can see the railroad depot in the background. 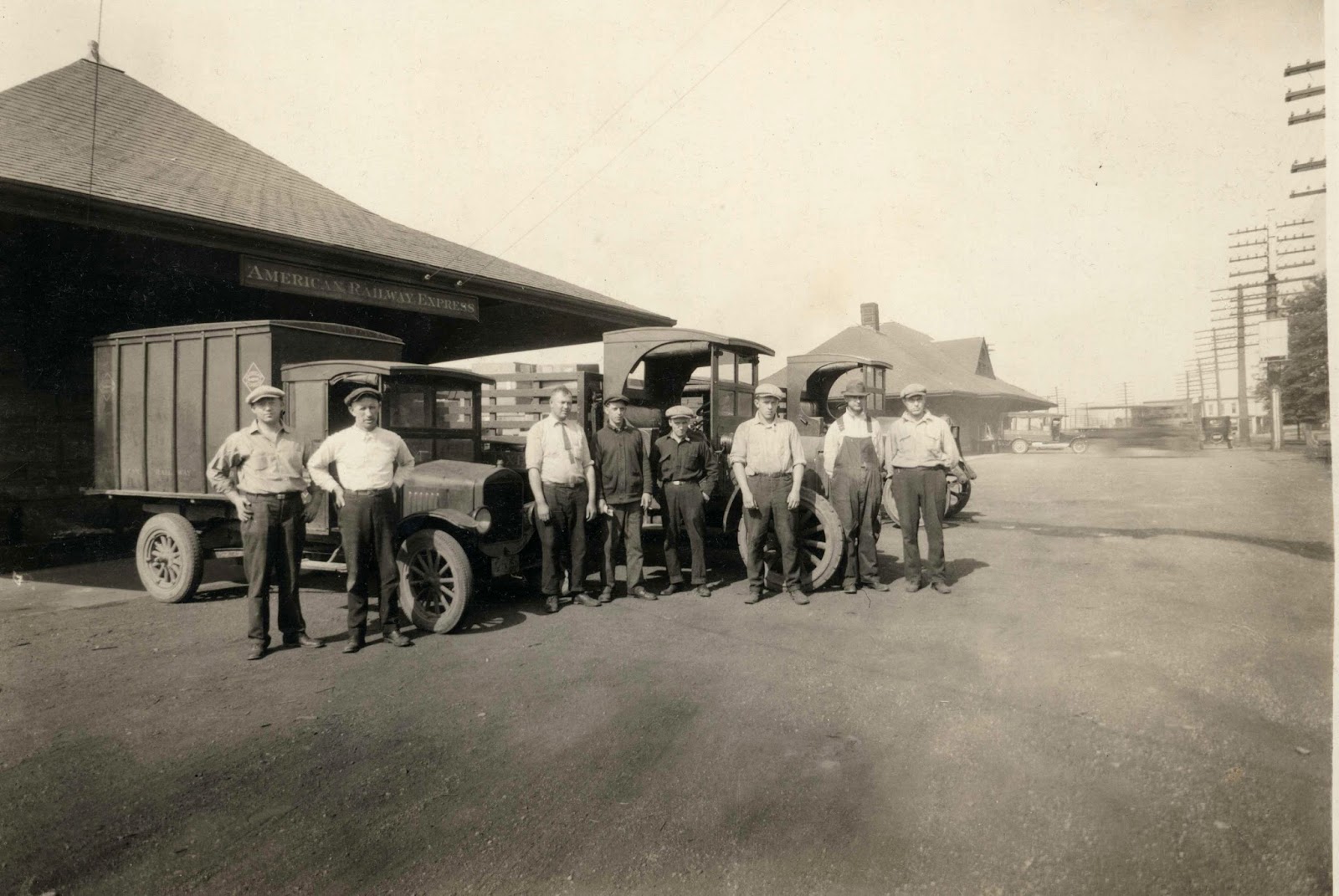 The American Railway Express Agency was created in 1917, when the U.S. government consolidated several of the country’s already existing express companies. The United States Railroads purchased the American Express Agency in 1929, and its name was changed to Railway Express Agency. Later known as REA Express, the company ceased operations in the mid-1970s.
Posted by Sandusky Library Archives Research Center at 2:02 PM No comments: 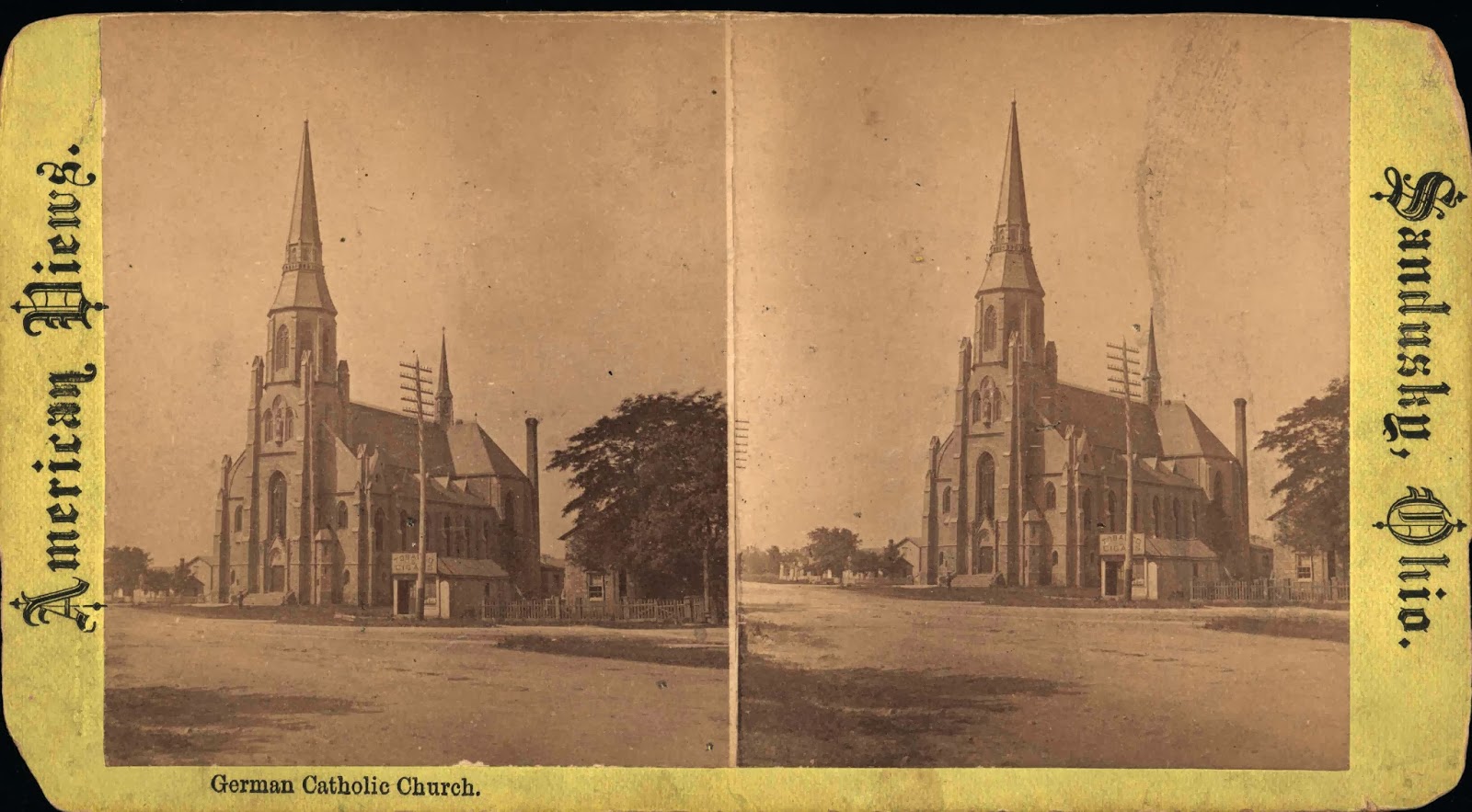 Here is a view of Sandusky’s bustling waterfront in the nineteenth century: 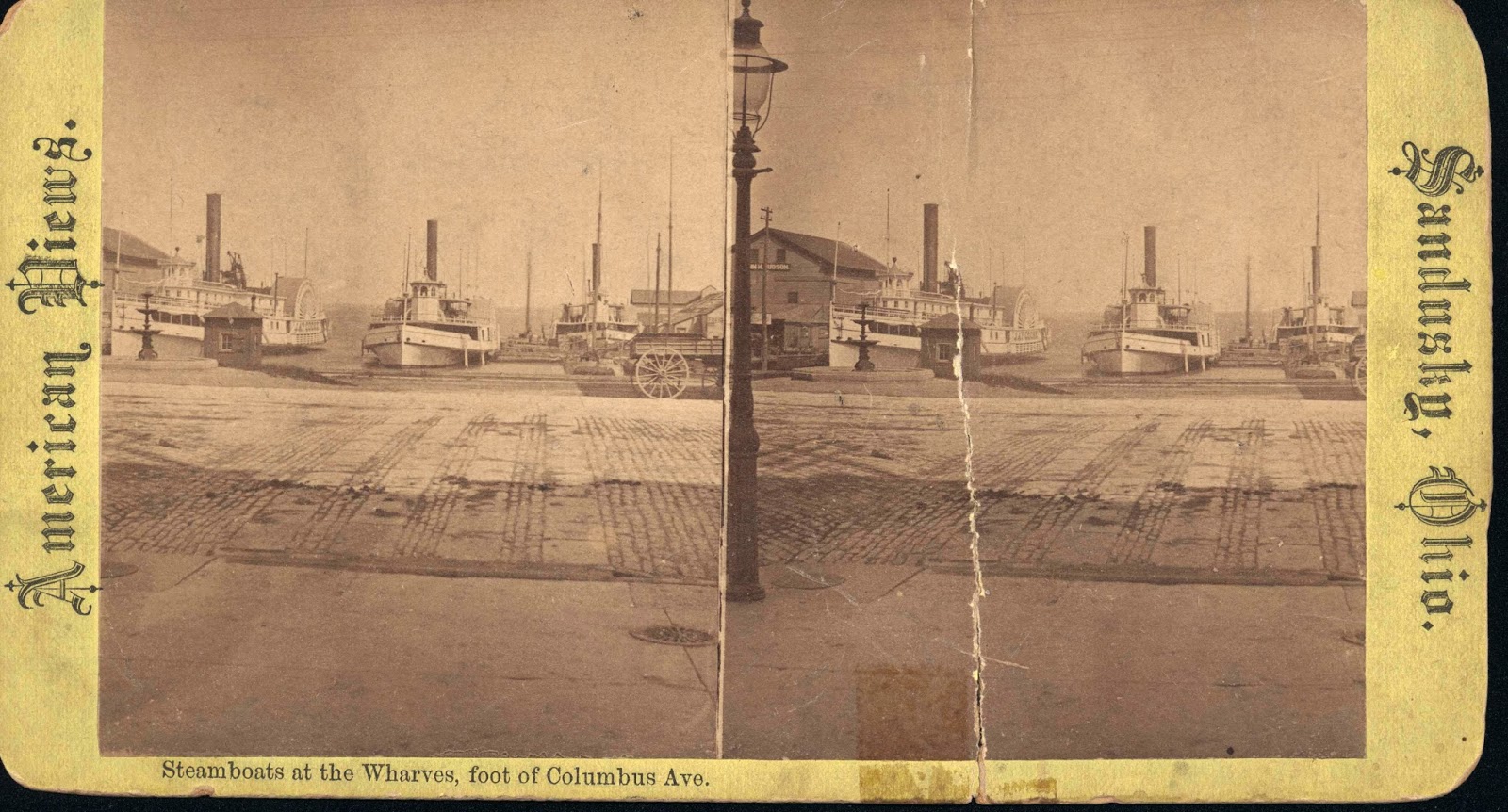 You can see the steeple of Emmanuel Church in this stereographic image of the Erie County Courthouse. 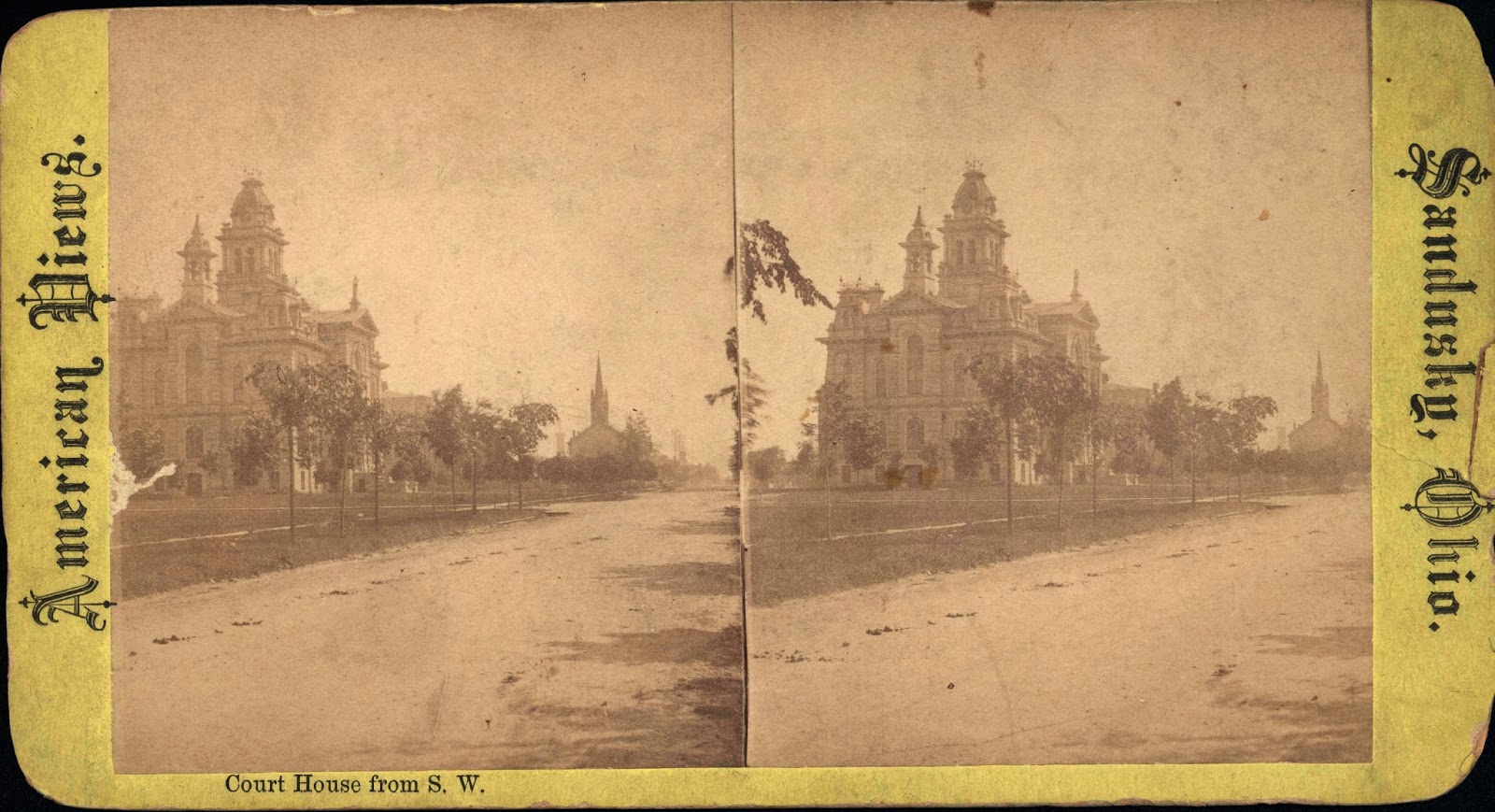 Sandusky High School was constructed in 1867, and about ninety years later became Adams Junior High School. Grace Church is at the left of the image. 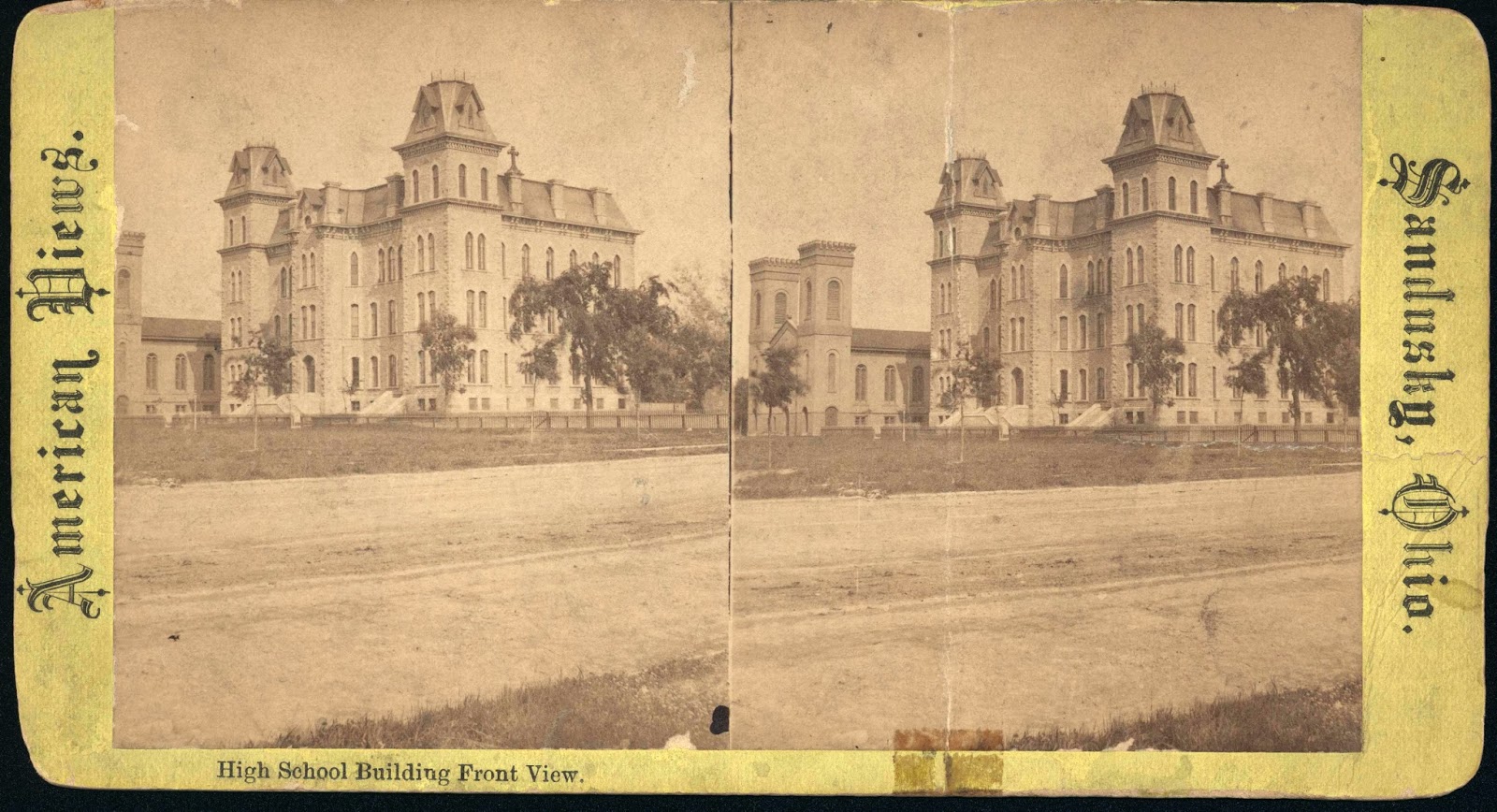 Visit the Sandusky Library Archives Research Center to learn more about the history of Sandusky and Erie County, Ohio.