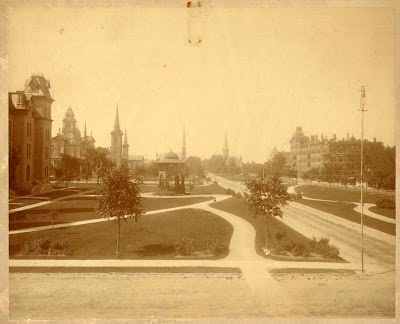 From Sandusky's founding in 1818, public parks have been an important feature in the culture of the community. Join us in the Library program room on Saturday, March 24, at 2PM, when Mike Pisarsky, Horticultural Servics Superintendent for the City of Sandusky, will speak about Washington Park, the heart of Sandusky's park system, including its history and it present status.

For more information, or to register, call the library at 419-625-3834.
Posted by Sandusky Library Archives Research Center at 4:06 PM No comments: 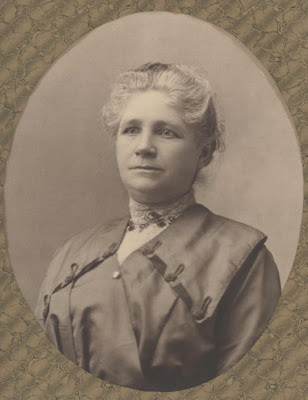 Fanny Facer Everett was a humane agent, probation officer and leading charity worker in Sandusky where she was beloved by the entire community. She was born in Sandusky and lived here most of her life.

For more than 20 years, she was connected with almost every form of benevolent and philanthropic work conducted by the general public in the city of Sandusky. For approximately 25 years, she was the leading figure in the Humane Society of the city and county. When the Erie County Humane Society was first organized in 1900, there were few members and very little financial means to help carry on the work.. For many years she acted as its first female humane agent without compensation and devoted her time, energy and strength to the work just as cheerfully, earnestly and enthusiastically as though it was her only pursuit in life. The activities of the society continued to expand and the society was finally able to render her financial assistance.

When the Federated Associated Charities was organized, Fanny Everett became its superintendent and had personal charge and direction of its expenditures.
When the juvenile court work was taken up by the probate court, Fanny was made probation officer—she was the first woman to be deputized by the sheriff of Erie County to carry a gun and make arrests.

For many years she was in charge of the distribution and adjustment of the mothers’ pensions for the county and also of the blind relief work.

It was said of her that there has perhaps never been a person in the city who was so thoroughly acquainted with the history of the people of the city who needed help, either in a financial, social or moral way. There was no one in the city to whom the weak and the erring would go so gladly, willingly and trustingly as to Mrs. Everett. Mrs. Everett’s home and her time and attention has been open both day and night to the many calls of the people of the city of Sandusky who have had trials and troubles and burdens.

Her son told a story about a memorable episode in her career: Late one night in 1902, she heard screams and cries for help coming from a house in the 200 block of Decatur Street, near where she lived. A man in a drunken rage was beating his wife and attacking his son and daughter. Fanny Everett marched straight to the house, knocked, and when the drunken man answered, she pointed her pistol at him and announced that he was under arrest. At the sight of the gun, the man raised his hands and begged “Don’t shoot, lady, don’t shoot.” Fanny replied, “You ought to be shot, but put on your shoes and you are going straight to jail.” The man obeyed and up Decatur Street they went, the man with his hands in the air. They reached the corner of Adams Street, where there was a saloon, one of the patrons, and finally a dozen or so, poured out of the bar. “Hey Joe!” they taunted, “The lady is taking you to jail, isn’t she?” When the man tried to answer, Fanny said “Keep your mouth shut and keep going.” In a few minutes they were at the door of the Erie County Jail where the man was quickly shown to a cell. At the trial the man was sentenced to ten days in jail. Fanny then took the wife and children to an attorney who advised the woman of her right to seek legal action for a separation and compulsory support payments. He urged her to seek a restraining order to protect her and the children. Many women at this time did not realize they had any legal rights against an abusive husband. Thus did Fanny Everett serve as a pioneer for social reform.
Posted by Sandusky Library Archives Research Center at 1:16 PM No comments: 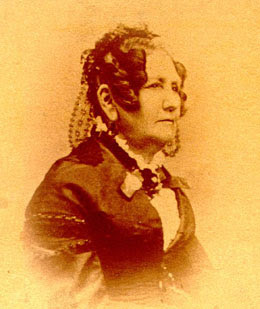 Eliza Gill Ward Follett was born in Albany, New York on September 17, 1801 to Daniel and Martha Ward. Her father died during the war of 1812, and her mother found it impossible to keep the children together, so Eliza lived with various relatives, and worked at household tasks, often feeling neglected and lonely. She married Oran Follett on November 22, 1832 in Fairport, New York. They moved to Sandusky in 1834.

Mrs. Follett was a highly respected member of the community. She was described as “active, unostentatious and faithful worker in this city, doing good, relieving the afflicted, encouraging the fearful, smoothing the pathway of those tempted to go astray, and yet never for a moment forgetting or neglecting the duties she owed her own family. From one end of our city to the other, in out of the way places, in hovel, in every abode of want, this patient, tireless and cheerful spirit was at hand helping and comforting and blessing those who but for her love would have no friends on earth…. If pecuniary assistance were not needed, some more gentle means of relief than the supplying of bodily necessities were sure to be extended by this friend of humanity. A bunch of flowers left in the sick room, a cheerful word of token, slight in itself, yet bearing golden fruit, was ready to witness of unselfish devotion to others. But it was peculiarly to the soldiers and their families during the dark days of the war that Mrs. Follett proved a friend and a comforter. From the opening day of the war to its close she gave herself up to the watchful care of the soldiers and their families. Rain and storm, cold could not keep her back from what she called her duty and loved to regard as a privilege, and today there is no man in this city whose death would be mourned as a personal loss by so many men, women, and children as will be the death of this unassuming woman, who went about doing good because she loved to do good.”

A neighbor said of her “Unless Mrs. Follett was going to church or to some social function, I never remember seeing her leave the house without carrying a bowl of soup. A plate of dainties, a basket of fruit or cooked food, or a bunch of flowers for some sick, needy or lonely person.”

She was generous to a fault. Her gifts of food, clothing and coal were so substantial and so numerous that they taxed the purse of her willing but more prudent husband. She was known to take garments off her back and leave them where she found distress.

A tender and skillful nurse, she never failed to minister at the bedsides of the sick, often spending days and nights away from home during critical illnesses. During a small-pox epidemic, she walked unscathed through the danger of contagion and fearlessly nursed cholera patients with her husband’s help, when doctors and nurses could not be procured, thus saving many lives. Her granddaughter said that she led a charmed life, that she was so selfless, so absorbed in others that no ill befell her.

She felt strongly against slavery and helped countless slaves on their journey to freedom, clothing, feeding and warming them on their way to Lake Erie and Canada. Her husband, Oran Follett also sympathized with the slaves, however he would remonstrate her with “Wife, it is against the law” and she would say “Husband, there is a higher law.”

During the war, she emptied the parlors of furniture and local women met there to pick lint and make bandages which were shipped off to hospitals at the front.

Her granddaughter wrote “I never shall forget going to market with—the walk down Columbus Avenue was like a triumphal progress. It took a long time to make the day’s purchases, because people crowded around her for a smile or word of greeting, or to answer inquiries regarding their well-being and that of their families."

Eliza Follett died April 29, 1876 in Sandusky. Her funeral at the Presbyterian Church was crowded to standing room only, and there were hundreds more people lined up outside in their carriages, having come from all over northern Ohio to pay their silent tribute. (The Follett family pew in the Presbyterian Church, decorated as a memorial to Eliza Follett.)
Posted by Sandusky Library Archives Research Center at 10:01 AM No comments: On August 26, 1920, an important ‘first’ quietly took place at the Erie County Courthouse in Sandusky. Early that morning, the ratification of the nineteenth Amendment to the Constitution of the United States was certified. That Amendment read in part “The right of citizens in the United States to vote shall not be denied or abridged by the United States or by any State on account of sex. “ On August 18, 1920, Tennessee was the thirty-sixth state to ratify the nineteenth amendment. Ohio had ratified the amendment on June 16, 1919.
On the morning of August 26, 1920, at the Erie County Courthouse, Judge Roy Williams was to conduct the trial of Pennok Jeffries vs. the Pennsylvania Railroad, for an automobile accident that occurred in 1919, when a train car struck Jeffries’ automobile.

The women were sworn in, the cases were stated, and cross examinations were made. When the statements were concluded, the judge gave the women of the jury their instructions and they retired to the jury room. They made their decision in four minutes and shortly returned to their seats in the jury box. They decided for the plaintiff, who was awarded $1500.
After the trial was over, the judge congratulated the women for their service on the jury. Each of the twelve women were paid two dollars for serving on the jury. This was the first all female jury in Erie County, and one of the earliest in the United States.

This historic event was commemorated with an Ohio historical marker erected during Ohio’s 2003 Bicentennial. The marker is located near the north entrance of the Erie County Courthouse where the photograph of the women of the jury was taken.
Posted by Sandusky Library Archives Research Center at 8:52 AM No comments: 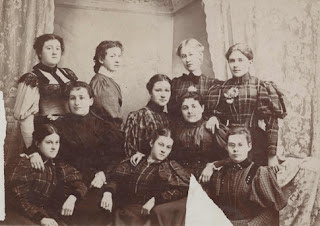 March is Women's History Month -- in honor that fact, this month's Brown Bag Lunch Series program will be about "Extraordinary Women of Sandusky." Join us on Wednesday, March 21, at noon, in the library program room, when Follett House Museum curator Maggie Marconi will talk about some notable Sandusky women -- including artists, a suffragist, a doctor, an opera singer, a probation officer, and the very first female U.S. Vice Presidential candidate. 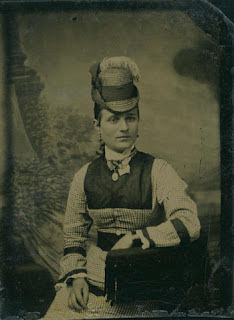 . . . And be sure to come back to this blog for stories about women of Sandusky.