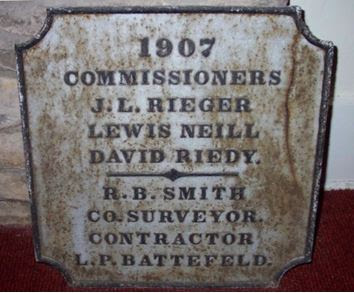 Now in the historical collections of the Follett House Museum, this iron plaque once marked the old bridge over Pipe Creek, just north of the residence at Oakland Cemetery. 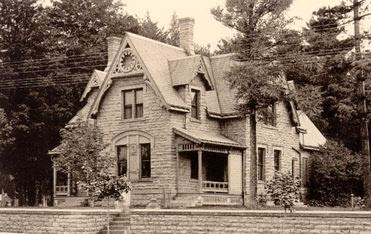 The Erie County Commissioners in 1907 were: J.L. Rieger, Lewis Neill, and David Riedy. (John L. Rieger may be best known in Sandusky for the Hotel Rieger, which he founded in 1912; the former hotel has since been repurposed as the Rieger Loft apartments.) The surveyor for the bridge was R.B. Smith Co. and the contractor was L.P. Battefeld. You can see where Oakland Cemetery borders Pipe Creek in the map below, taken from the 1896 Erie County Atlas. 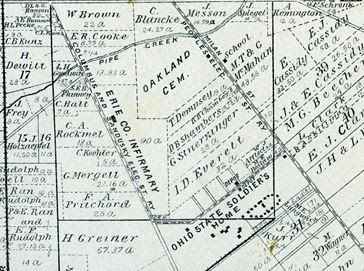 Pipe Creek runs through Erie County from Groton Township to Sandusky Bay, and is often mentioned in local county histories as being a site where pioneers first settled. It is believed that the name Pipe Creek came from the clay found in the creek bed, from which Native Americans made pipes. Today there is a Pipe Creek wildlife area at the mouth of the bay. 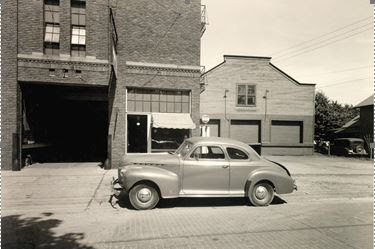 In the picture above, a vintage vehicle is parked in front of the Sprow Moving Company on Maple Avenue in the 1940s. The street is paved with bricks at this time, and a Sohio gas pump is visible behind the car. On the right side of the picture is an older model automobile beside a garage and a trellis. 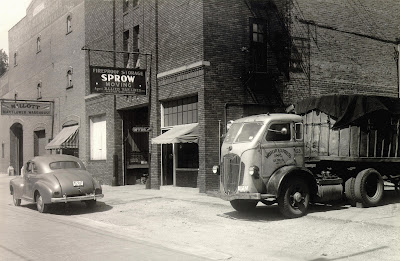 An article about Lawrence Millott, which appeared in the October 18, 2003 issue of the Toledo Blade stated that the Millott Transfer and Storage Corporation had been run by three different generations of the Millott family before the business closed in 1986.  Several other businesses have been in operation at 1000 Maple Avenue, which is now a commercial warehouse owned by a realty company. Check the historical city directories to learn about the past locations of our area’s former residents and businesses.
Posted by Sandusky Library Archives Research Center at 9:00 AM No comments: 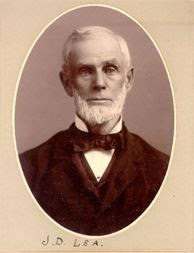 James Davis Lea was born on July 21, 1817 in Lycoming County, Pennsylvania. He moved with his family to Ohio when he was a young man. After working for a time as a school teacher and then as a carpenter, he established himself as a lumber merchant. Below is an advertisement from J.D. Lea’s business, from the 1855 Sandusky City Directory. 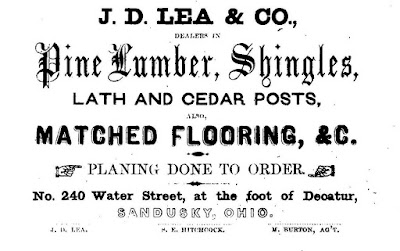 Through the years, Mr. Lea had several different partners in the lumber business, including Lewis Moss, Frank Sloane, and finally his son in law, Mr. William H. Herbert. In 1897 Mr. Lea retired from the lumber business, and in retirement devoted his time to real estate. The Lea Block, at the southwest corner of Wayne and Market Streets was named for James D. Lea. 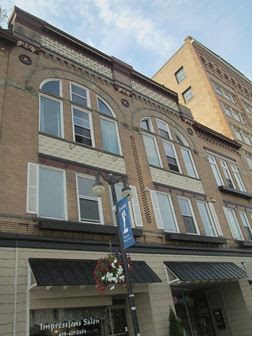 His wife was the former Caroline Mackey, and together the Leas had six children, three of whom survived to adulthood. On  January 8, 1901, James D. Lea died at his home on Wayne Street. An article in the Sandusky Star of January 8, 1901 reported that Mr. Lea had been “one of the most prominent and respected citizens of Sandusky.” He was remembered as someone who was honorable and fair, and was missed by a wide circle of friends. Mr. Lea had been a trustee of the Sandusky Water Works, and was a member of the Science Lodge, Sandusky City Council, and the Knights Templar. Funeral services were held at the family’s residence on Wayne Street, under the auspices of the Science Lodge, and burial was at Oakland Cemetery.

The Hermit of Fowler’s Cut 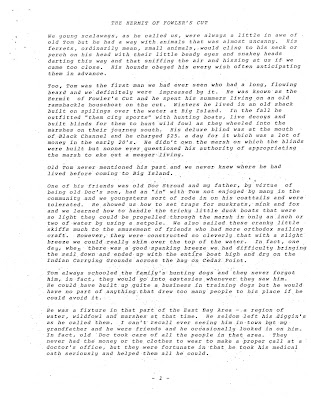 Mrs. Eleanor Stroud Evans gave a typewritten account of her memories of Tom Fowler to the . Mr. Fowler was known as “The Hermit of Fowler’s Cut.”  Well recognized for his long, flowing beard, during the summer, he lived in a houseboat in an area close to known as Fowler’s Cut. In the winter, he lived in an old shack on .

During the fall season, he rented boats to hunters and fishermen. Mrs. Evans stated that old Tom Fowler “had a way” with animals. Ferrets would cling to Tom’s neck or perch on his head; hunting dogs obeyed every command that Tom gave them.  Tom trained hunting dogs for Dr. Clarence Stroud, the grandfather of Eleanor Evans, and also for the family of Allen Stroud, Eleanor’s father. Tom showed members of the Stroud family how to set traps for muskrats and fox, as well as how to handle the duck boats that he rented. Eleanor said that Mr. Fowler could have had a business in training hunting dogs, but he did not want to do anything that would attract too many people to his place. 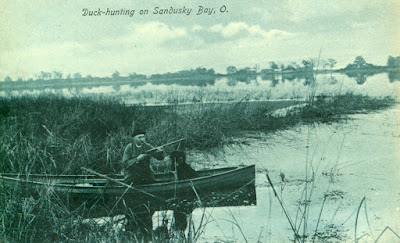 According to the 1920 U.S. Census for , Thomas Fowler was born about 1856 in . He emigrated to the around 1872, and became a naturalized citizen. An obituary, found in the 1927 Obituary Notebook at the Sandusky Library, stated that he had lived in the area for forty seven years. He died at his residence at on July 25, 1927, and was buried at . Mrs. Eleanor Evans wrote that Tom Fowler had been a fixture in the eastern portion of , and the would never be quite the same without “Old Tom.”
Posted by Sandusky Library Archives Research Center at 9:00 AM No comments:

In the fall of 1935, the Sprau Burial Vault Company was founded in Sandusky, at the corner of Camp and West Monroe Streets. Sprau burial vaults were made of reinforced cement, which rested upon a base. When the vault and casket were lowered into the ground, an airtight seal prevented water and dampness from damaging the casket. The Mound Studio took this photograph of a Sprau Burial Vault. 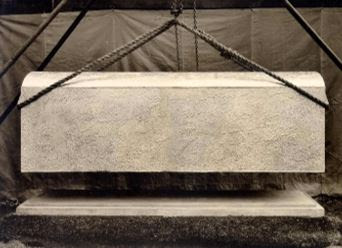 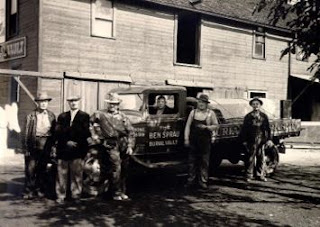 By 1939, there was no listing for the company in the Sandusky City Directory. Albert C. Sprau went on to work for the New York Central and Pennsylvania Railroads; in the early 1950s, was the bridge tender for the old Bay Bridge. He died on April 11, 1954. Ben Sprau passed away in March of 1962, after having been a marine engineer for over 25 years. Ben Sprau also had worked as an engineer for the City of Sandusky and the Plum Brook Ordnance Works.
Posted by Sandusky Library Archives Research Center at 9:00 AM No comments: 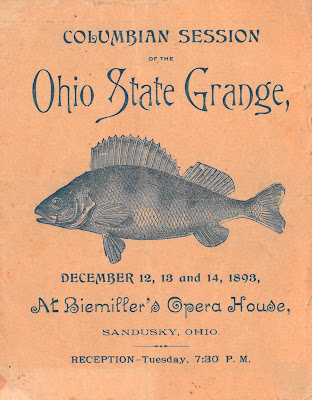 On December 12, 13, and 14, 1893, the 21st Annual Session of the Ohio State Grange, Patrons of Husbandry met in Sandusky. It was called the “Columbian Session” in reference to the World’s Columbian Exposition, which was held in Chicago in 1893 to celebrate the 400th anniversary of Christopher Columbus’s arrival in the New World. 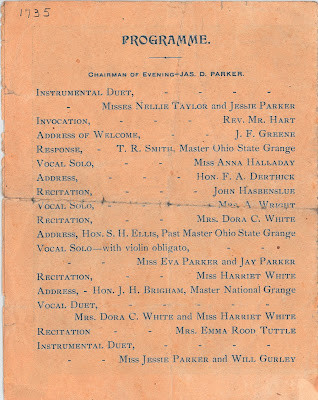 Sessions for the Grange members were held at Biemiller’s Opera House in downtown Sandusky. Chairman of the evening session on December 12 was James D. Parker. According to the December 13, 1893 issue of the Sandusky Register, the Opera House was decorated with palms and sheaves of wheat. Mr. Parker told the audience that he had drafted some of the children of Erie County Grange members to participate in the entertainment portion of the evening’s events. His son and daughter, Eva and Jay Parker performed a vocal solo. Another daughter, Jessie Parker, played instrumental duets with Nellie Taylor and Will Gurley. Several other solos and recitations were performed.  Joseph H. Brigham, Master of the National Grange, gave the main address. Other speakers of the evening were Rev. Mr. Hart, J.F. Greene, F.A. Derthick, and S.H. Ellis, Past Master Ohio State Grange. Miss Hattie White recited “The First Settler’s Story” and Mrs. Emma Rood Tuttle recited “Mother and Poet” by Elizabeth Barrett Browning. 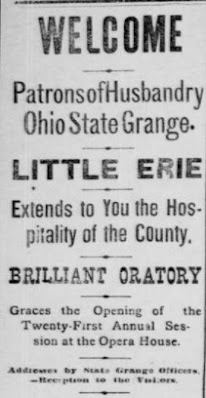 The Columbian Session of the Ohio State Grange was the topic of a lengthy front page article in the December 13, 1893 issue of the Sandusky Register.  The Register extended hospitality to all the visiting Grange members, and the headline stated that “brilliant oratory” had graced the opening session. Pictured below is the Nielsen Opera House, which had originally opened as the Biemiller Opera House in 1877. The Opera House was the site of many of the sessions held by Ohio State Grange’s annual meeting in 1893. 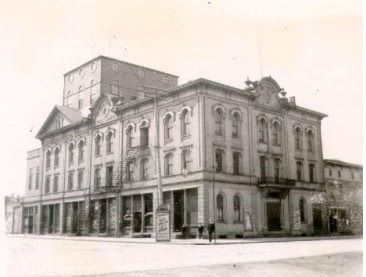 Children at Play in Sandusky 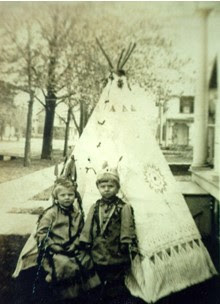 Though the children have not been identified in the picture above, notes on the original item indicate that the photograph was taken on Reese Street in 1912 by an itinerant photographer who visited Sandusky. Around the same time, several of the Smith children, along with a friend, can be seen having fun at the beach.

The little girl in the picture below is about to go for a wagon ride with her dog and a goat.