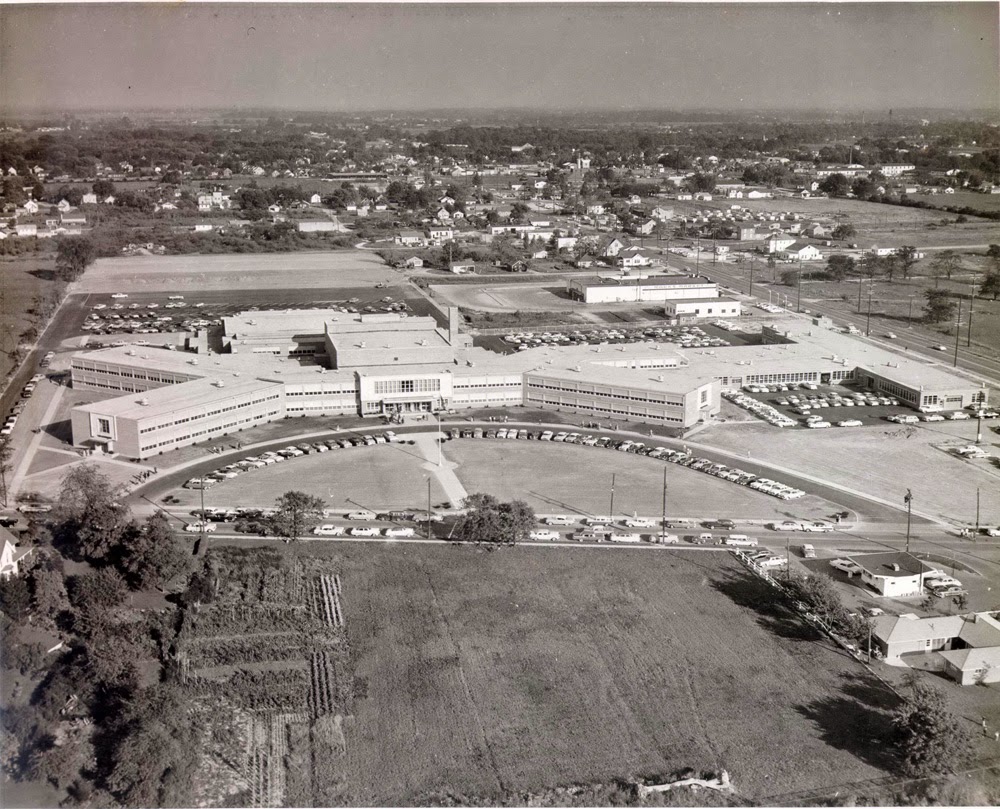 Harley Hoffman took this aerial picture of Sandusky High School from an airplane in 1957. Notes with the original picture state that the airplane was going 200 miles an hour at the time the picture was taken. The new  opened at . Prior to that time, Sandusky High Students attended school at what later became .  Large areas of farmland can be seen in this picture. Now the portion of Perkins Avenue opposite Sandusky High School is filled with restaurants and other businesses. The longer building to the east of Sandusky High School was Mark’s Market, later known as Mark’s Pick-n-Pay. The small building opposite the high school was the Stadium Dairy Bar, which was run by John J. Poggiali.

Harley W. Hoffman had a photography business in nearby Castalia in the 1950s. Mr. Hoffman took several other photographs of in 1957. A large crowd can be seen gathered in front of the school for the flag raising at the dedication of the new school building. 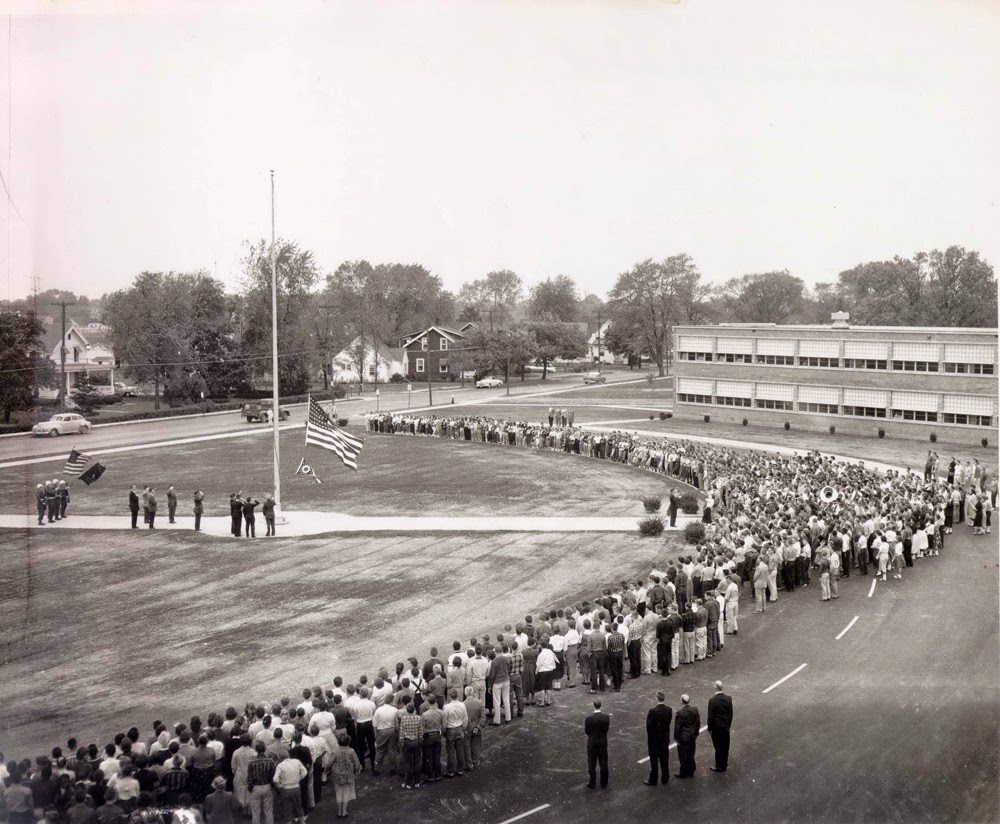 Industrial Arts students had a new large classroom, equipped with tools and workbenches: 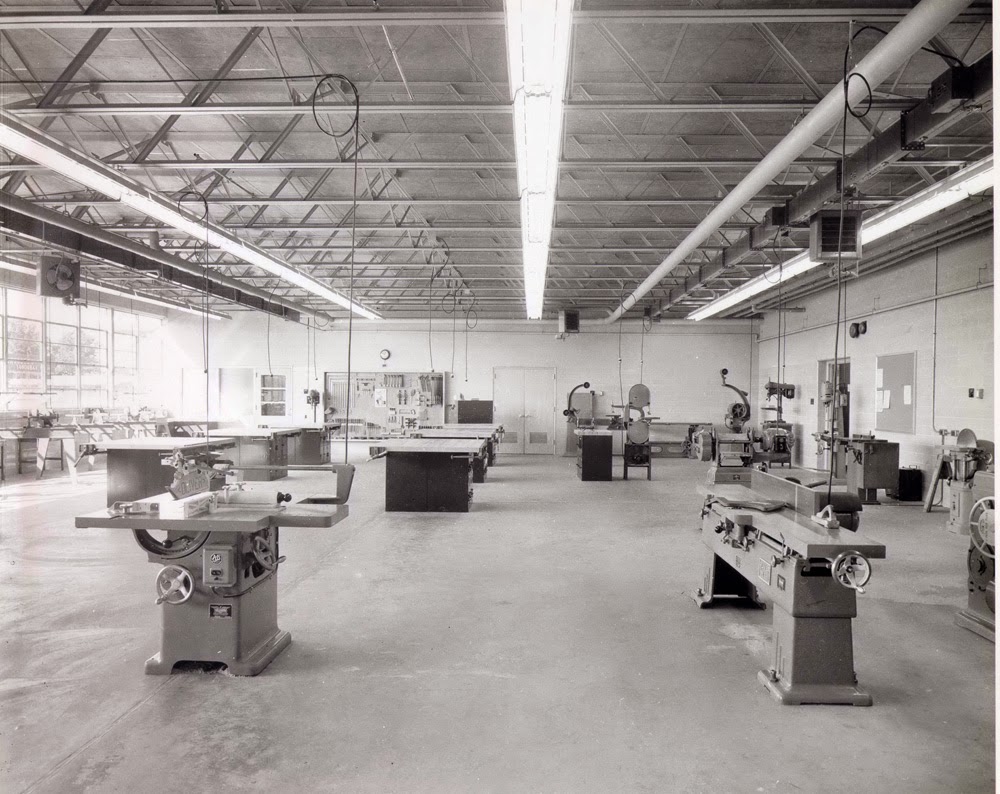 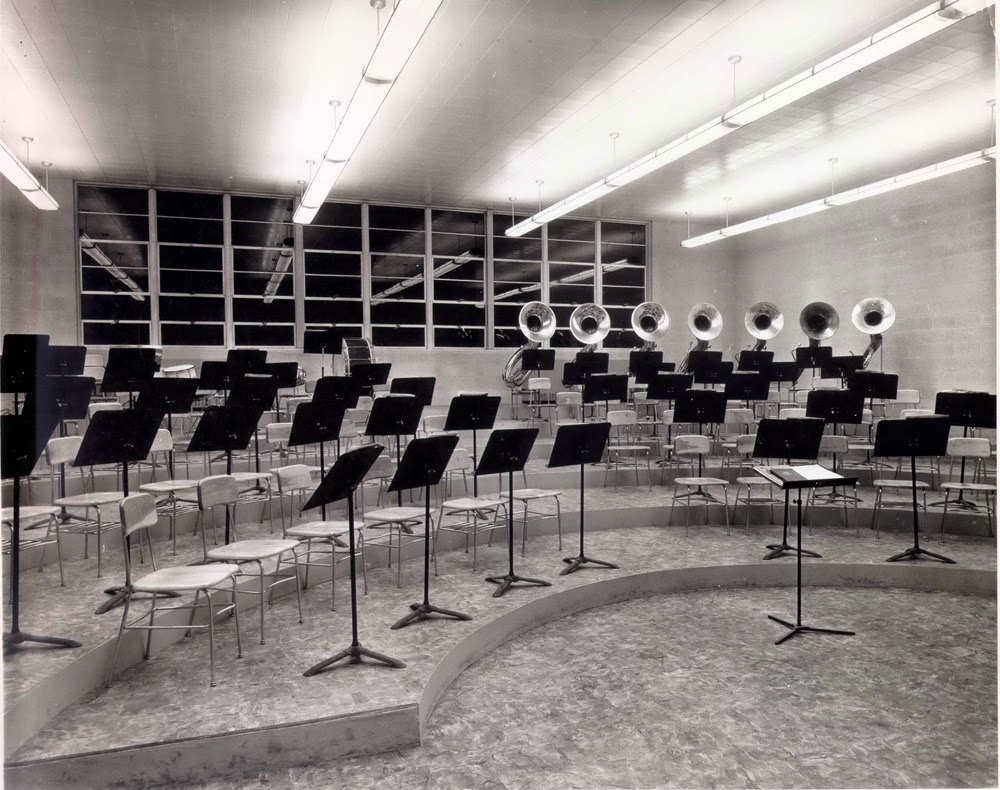 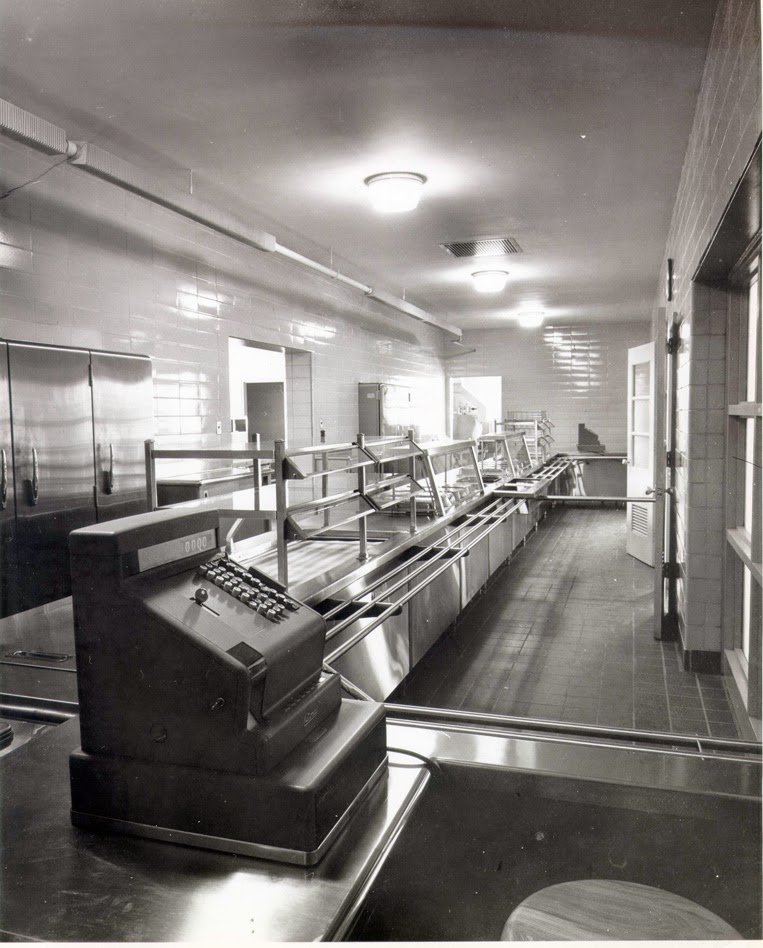 Visit the to see hundreds of historic photographs of  the people and places of our local community. We appreciate the generosity of the many donors who bequeathed  the numerous historic documents, books and photographs now housed in our collection.
Posted by Sandusky Library Archives Research Center at 4:45 PM No comments: 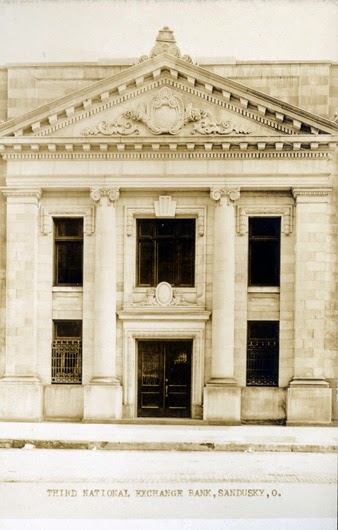 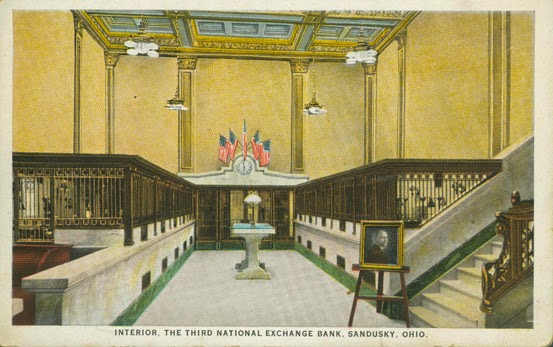 Local photographer Jay Hoehlein took this photograph at the bank in the summer of 1936: 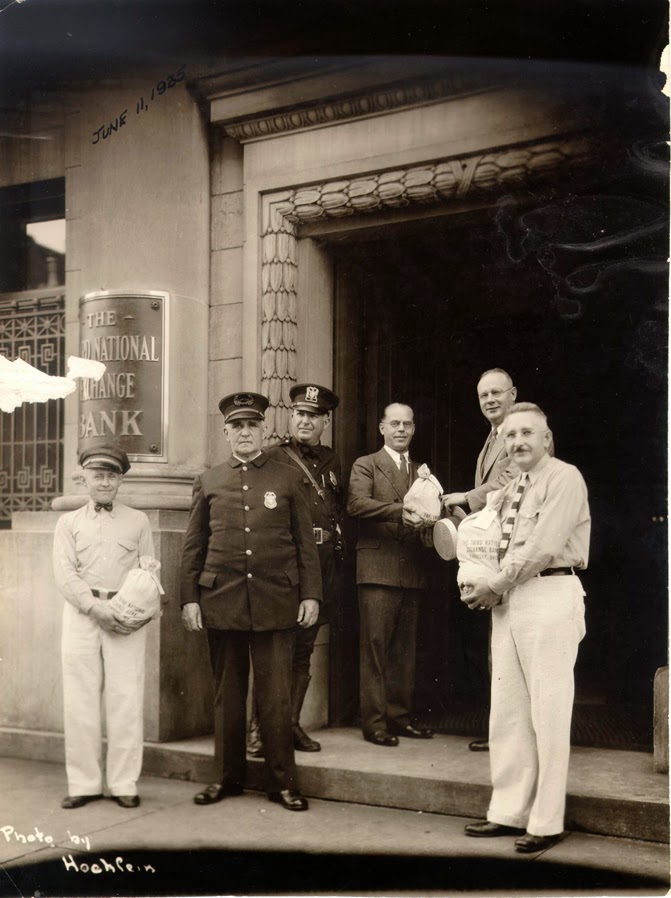 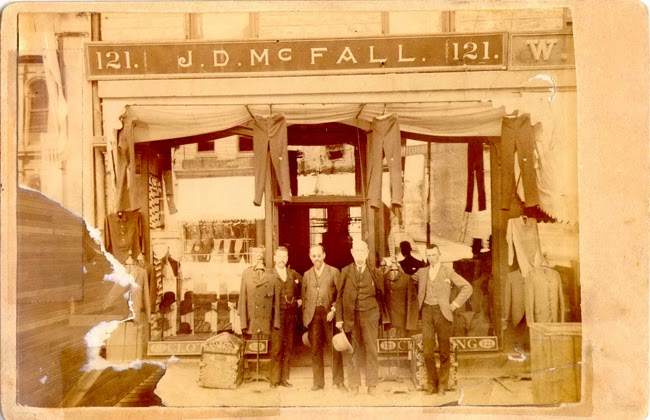 In 1890 and 1891, Jasper Dean McFall operated a store in at . He sold clothing and gents’ furnishings.  The business was begun by J.D. McFall’s father, William H. McFall, Sr. In 1882 there were two men’s clothing stores operated by the elder Mr. McFall, one at 107 Columbus Avenue, and one at 708 Water Street. 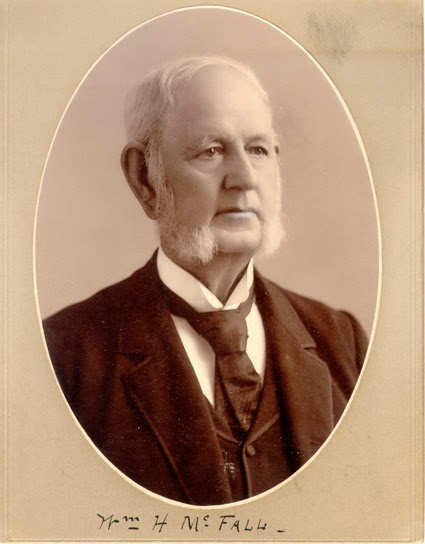 From about 1886 to 1888, the store was run by the McFall brothers, three sons of the elder Mr. McFall. J.D. McFall was the manager of the McFall Brothers store in 1888, and by 1890, he was the proprietor. This advertisement for J.D. McFall’s store appeared in the March 31, 1891 issue of the Register. The surname McFall surrounds the advertisement which highlights spring suits and overcoats.

According to an article in the February 25, 1922 issue of the Sandusky Register, in 1897, J.D. McFall moved from to , where he studied music.  He moved to and later to the state of . While in , he was the director of music at the . He served in a similar position at the , until poor health forced him to retire.  At a memorial service for President William McKinley, held at Chase’s Theater on October 6, 1901, J.D. McFall was in charge of the music for the service. 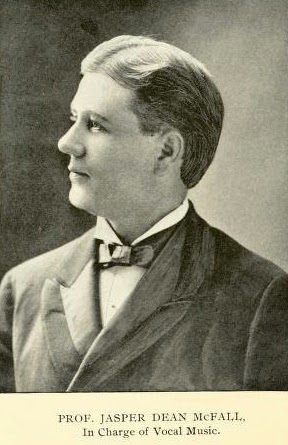 J.D. McFall died at his home near Jennings Lodge, on February 5, 1922, at the age of 52. He was fondly remembered by residents, who recalled his fine baritone voice.
Posted by Sandusky Library Archives Research Center at 9:10 AM 1 comment:

Fountain at the Foot of Columbus Avenue 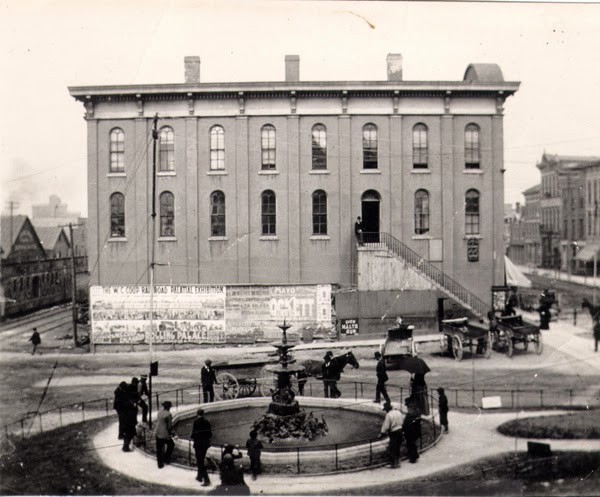 A public fountain was at the foot of Columbus Avenue in downtown Sandusky in the late nineteenth and early twentieth centuries, not far from the waterfront.  In the picture above, the Post, Lewis and Radcliffe building, which dates back to 1866, can be seen just to the east of the fountain. Ellie Damm wrote in her book Treasure by the Bay, (Bucknell University Press, 1989), that the square where the fountain was located was often filled with activity as people gathered to meet the trains and boats as they arrived in Sandusky.

The photograph below was taken sometime before 1903. The steamer "Arrow" is at dock; the "R.B. Hayes" is approaching (or leaving) the dock; another unidentified steamship is visible in the background, heading out into the bay. A fruit stand is at the lower right of the image; a newsstand/cigar shop is next to the dock; the Sandusky Fish Co. is slightly visible at the extreme left of the image. 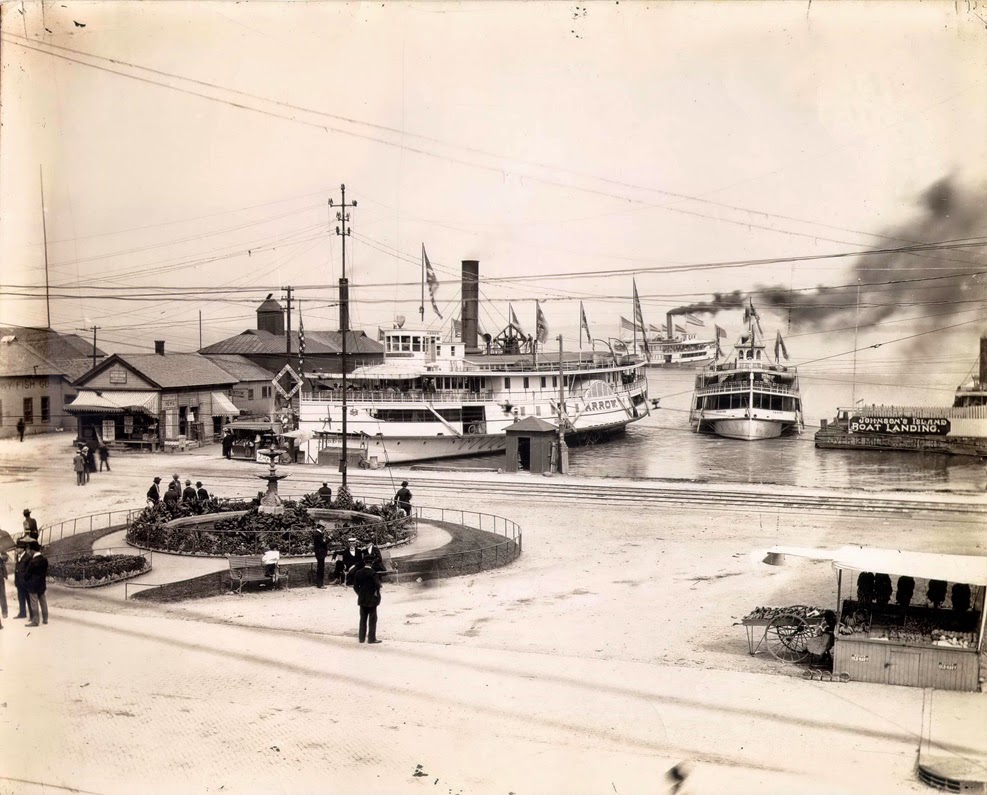 Just past the railroad tracks, to the northwest of the fountain, the building with the large balcony was the Terminal Inn. This business opened in 1903 and was destroyed by a massive fire on June 21, 1904. Today a modern fountain at the Schade-Mylander Plaza welcomes visitors to historic downtown Sandusky.
Posted by Sandusky Library Archives Research Center at 3:54 PM 1 comment:

Early in September of 1908, William Howard Taft gave a speech in Sandusky in 1908 that was generally regarded as the first speech of his active campaign for the U.S. presidency as the Republican candidate in 1908.  On September 7, after arriving in Sandusky aboard the Lake Shore Electric Railway from Fremont, Judge William Howard Taft, General J. Warren Kiefer, General Henry Corbin, along with Mrs. Taft and young Charlie Taft, were driven from the Lake Shore Electric station to the residence of Edward H. Marsh, where the visitors would spend the night.  A representative from the Sandusky Register met Judge Taft at the station, where he was greeted with the well known “Taft smile.” The party had dinner at the Marsh home at 6 p.m. photographer W.A. Bishop took this picture of William Howard Taft, General Kiefer, Edward Marsh and Edward Lea Marsh, during Taft’s visit to . 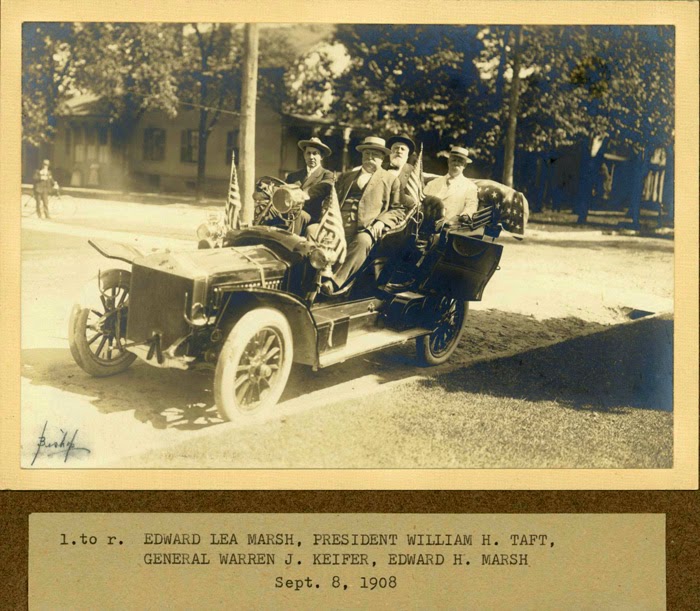 On the morning of September 8, 1908, Judge Taft, General Kiefer, and General Corbin, went to the Ohio Soldiers’ and Sailors’ Home, where they gave addresses of a non-political nature. 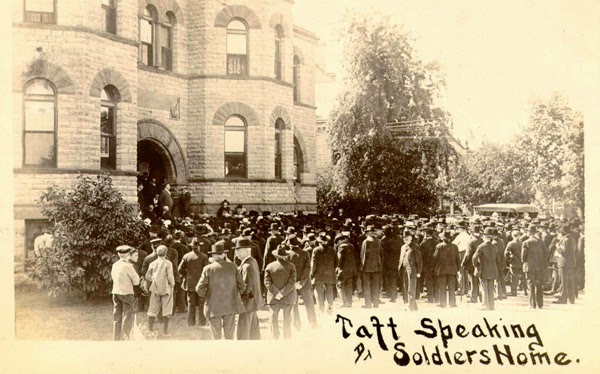 Judge and Mrs. Taft visited several of the residents of the Home who were too frail to leave their rooms to hear Taft’s speech in person. At noon, Judge Taft addressed a large audience at the Opera House in . The theater was filled, with only a few seats left vacant.  Judge Taft spoke for thirty minutes, having his speech interrupted with applause several times. According to a lengthy article in the September 9, 1908 issue of the Sandusky Register, Taft stated that if elected “he would spend his time suggesting to Congress means by which the Rooseveltian policies might be clinched” After his speech, Judge Taft shook hands with several ladies and gentlemen who gathered around him on stage at the Opera House. Judge Taft departed from the Big Four station on the 1:40 p.m. train, on his way to make more speeches in the area. Pictured below is William Howard Taft in his top hat, surrounded by several people as he got ready to leave . 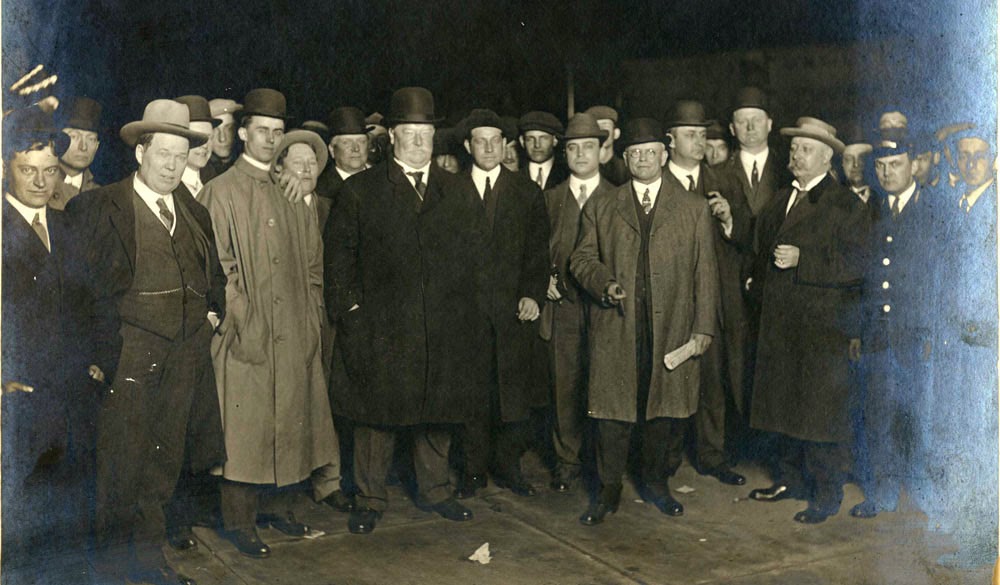 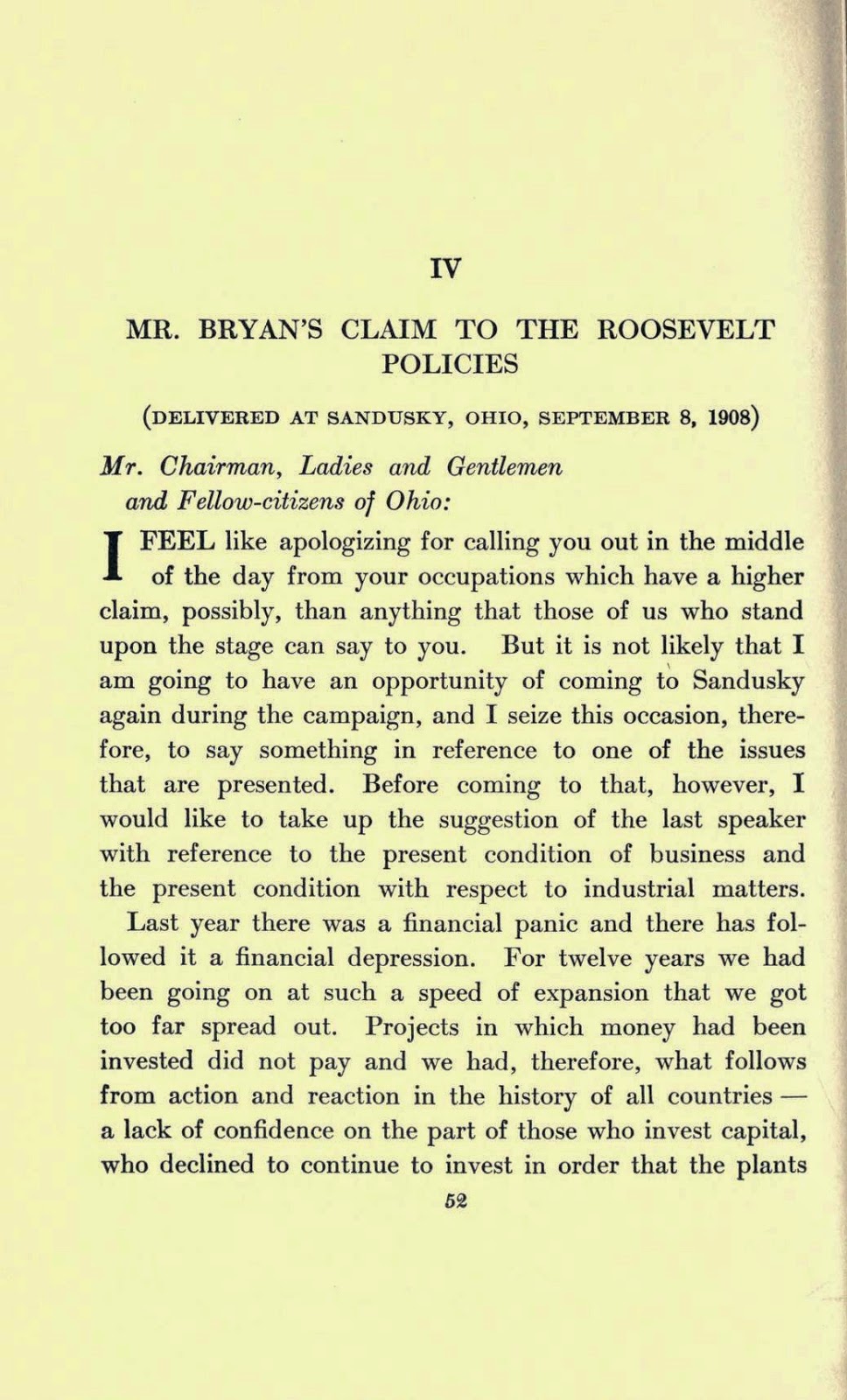 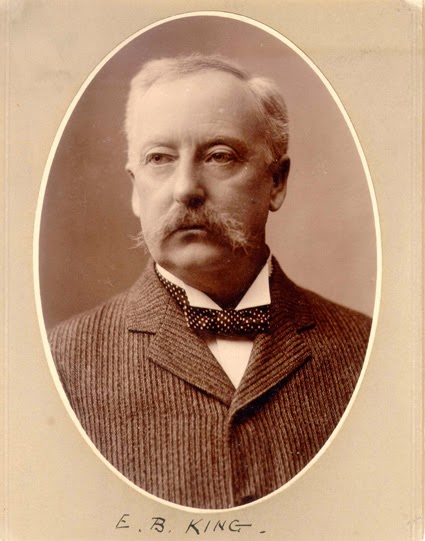 Edmund Burritt King was born on a farm in July 4, 1850 in Medina County, Ohio to Cyrus and Harriet (Bennett) King. After attending the Oberlin Academy and Baldwin-Wallace University, Edmund studied law. He was admitted to the Ohio Bar in 1873, and in 1875 he moved to Sandusky, where he practiced law for twenty years. He was associated with several attorneys at various times in Sandusky, including W.W. Bowen, S.F. Taylor, E.M. Culver, and Lynn Hull. From 1894 to 1899, Mr. King was Judge of the circuit court for the Sixth Judicial Circuit of Ohio. Judge King is pictured below with fellow circuit judges Robert S. Parker and George S. Haynes. 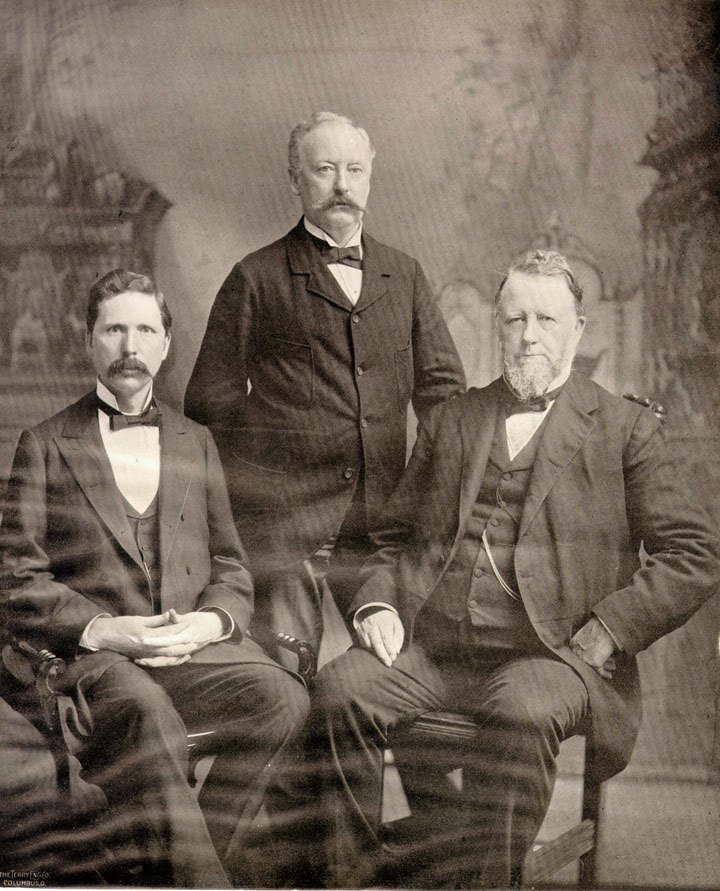 In 1899 Judge King returned to private practice with W.E. Guerin, and later, in a law partnership with Russell K. Ramsey. From 1880 to 1898, he was a member of the Ohio National Guard, attaining the rank of major. Judge King was a presidential elector in 1888 and was a delegate to the fourth constitutional convention of the state of Ohio in 1912. In 1916 Judge King served as president of the Ohio State Bar Association. An article in volume 62 of the Ohio Law Bulletin stated that at the thirty-eighth annual meeting of the Ohio State Bar Association, which met at Cedar Point, “Hon. E.B. King further distinguished himself as the presiding genius of the several sessions of the meeting, gracefully controlling and firmly pressing the business in hand to prompt conclusions.”

Late in 1933, Judge King began suffering from heart problems. He passed away from heart disease on December 30, 1934. Judge King was survived by his wife, the former Edith E. Hackett, daughter Cora King Graves, and son Clifford King. Funeral services for Judge E.B. King were held at the Masonic Temple under the auspices of the Thirty-third Degree Scottish Rite Masons, as well as at the Presbyterian Church with the Rev. A.J. Funnell officiating. Burial was at Oakland Cemetery. Shortly after Judge King’s death, Judge Roy Williams stated that “it will be a long time before Erie County again has a citizen of the outstanding principles of Judge King. His predominating character was his unselfishness. There was not a movement in the community that he was not to the fore in. Sandusky has lost one of its finest friends.” You can read Judge King’s history of the early years of the Erie County Bar Association in chapter 25 of Hewson Peeke’s book  A Standard History of Erie County, Ohio (1916).
Posted by Sandusky Library Archives Research Center at 3:01 PM No comments:

Program Announcement: A Day for Genealogists

“A Day for Genealogists” will be featured at the Sandusky Library on Saturday, September 20. From 10:30 to noon, learn how to get started in researching your family tree. From 1 to 5 p.m., the Sandusky Library will host a “Lock In” for genealogists. The library will open only to those registered for the Genealogy Lock In. Computers will be available, and you may search through the library’s holdings of local and family history books and microfilms. Call 419-625-3834 to register for all or part of the Day for Genealogist.
Posted by Sandusky Library Archives Research Center at 2:19 PM No comments: 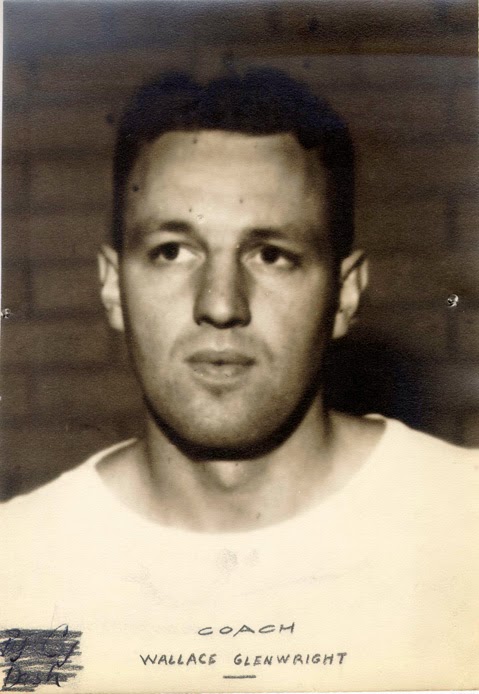 Wallace Glenwright’s long career with Sandusky City Schools covered over thirty years. He arrived in shortly after his graduation from . He served as assistant to ’s head football coach Bob Whittaker from 1930 to 1940. Later he became the head coach in football, basketball and golf, and assisted in coaching track. For two years, Mr. Glenwright was the athletic director. He became assistant principal of in 1946, and was named principal in 1948. In 1957, Mr. Glenwright served as assistant superintendent, and from 1958 to 1968, he served as superintendent of Sandusky City Schools. He is pictured below in about 1960. 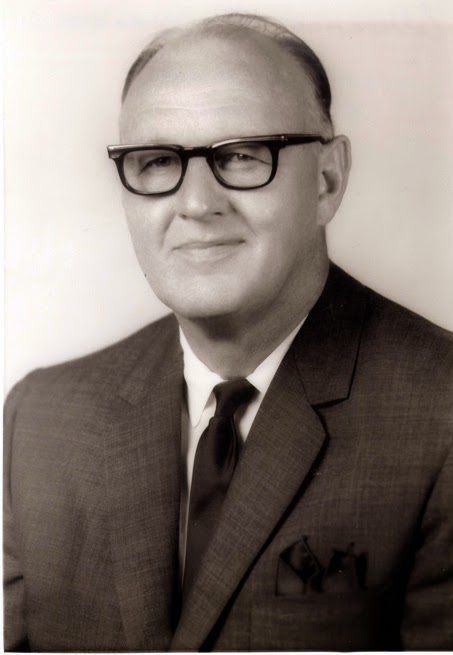 When the was opened at the high school in the late 1960s, Mr. Glenwright presided at the dedication ceremony. 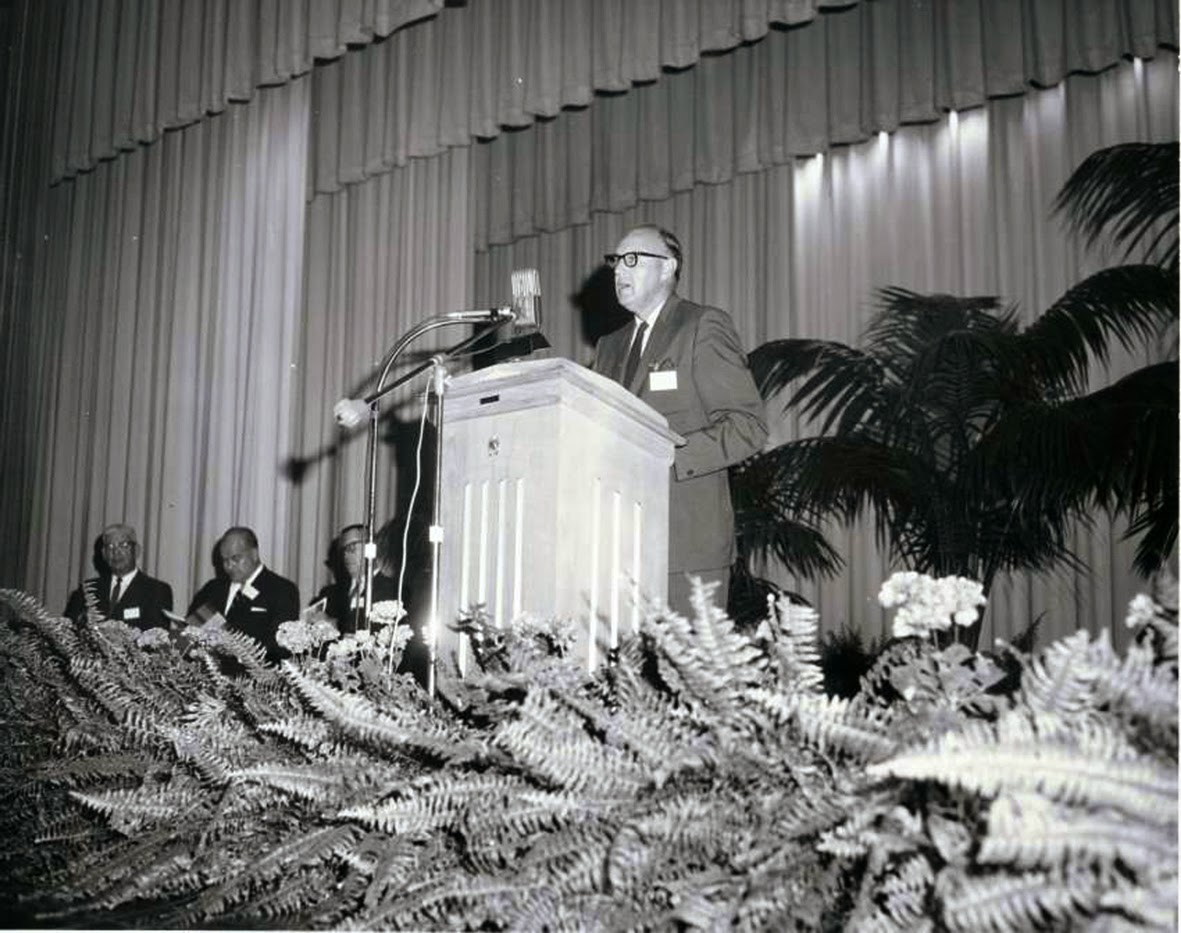 Besides his many roles as an educator, he was active in numerous civic organizations. The picture below was taken at a Lions Club meeting about 1950. Wallace Glenwright is the man on the far right. 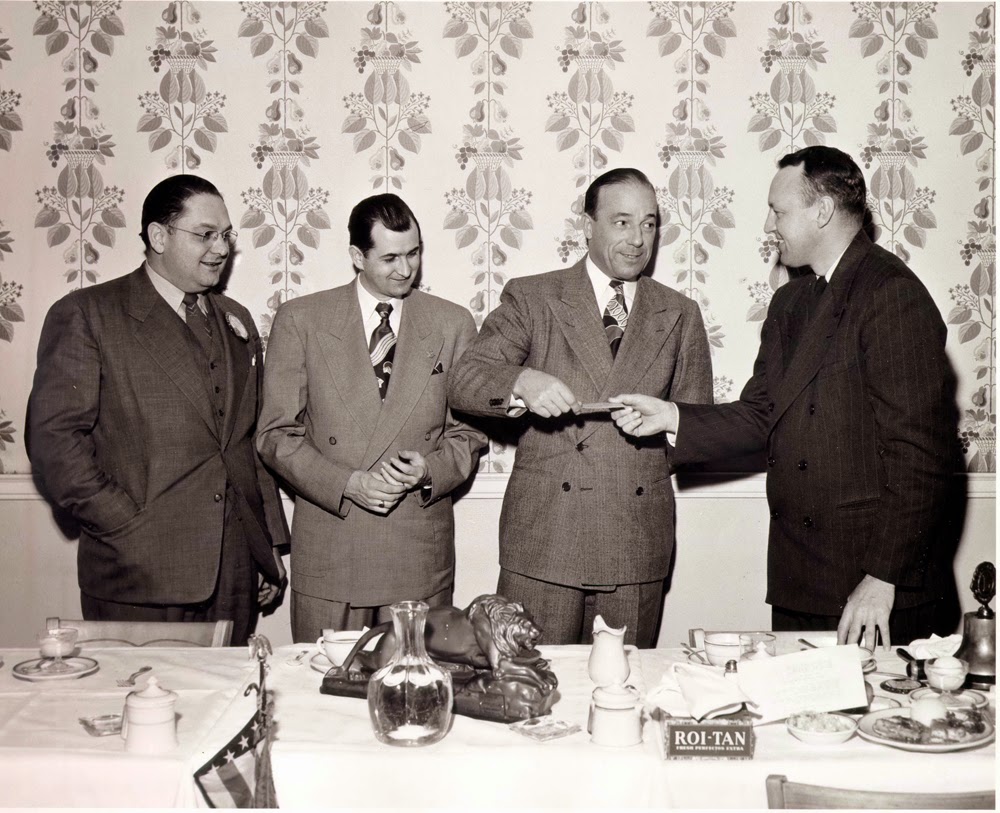 Wallace Glenwright died on September 4, 1997 at . A lengthy obituary honoring Mr. Glenwright appeared in the September 6, 1997 issue of the Sandusky Register. The article read in part, “Friends say his qualities overshadowed his honors. Honest, caring, genuine, and gracious were just a few of the words friends and family used to describe him.” To read more about Wallace Glenwright, and other local educators and coaches, visit the , to view historical school yearbooks and newspapers on microfilm.
Posted by Sandusky Library Archives Research Center at 10:21 AM No comments:

At Work in Sandusky and Erie County The warm weather in the summer months in northern allows for workers in a variety of occupations to get work done that is not easily accomplished in the cold months of the winter season. Sandusky photographer W.A. Bishop took the photograph above on July 25, 1908. Employees of the Erie County Courthouse can be seen looking out at Case equipment used to improve roads in Erie County. About 1920, Joe Staffler, Henry Scheid, and Fred Staffler were working on an outside project with a wheelbarrow and shovels. 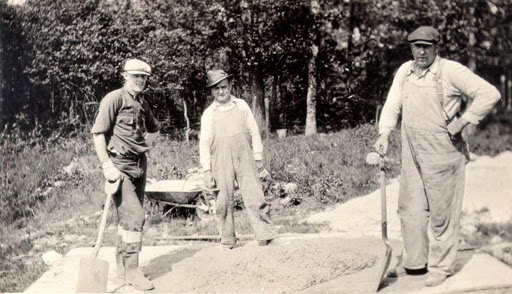 In the picture below, taken in the early part of the twentieth century, a group of six men are working on a handcart along the Lake Shore Electric Railway in . 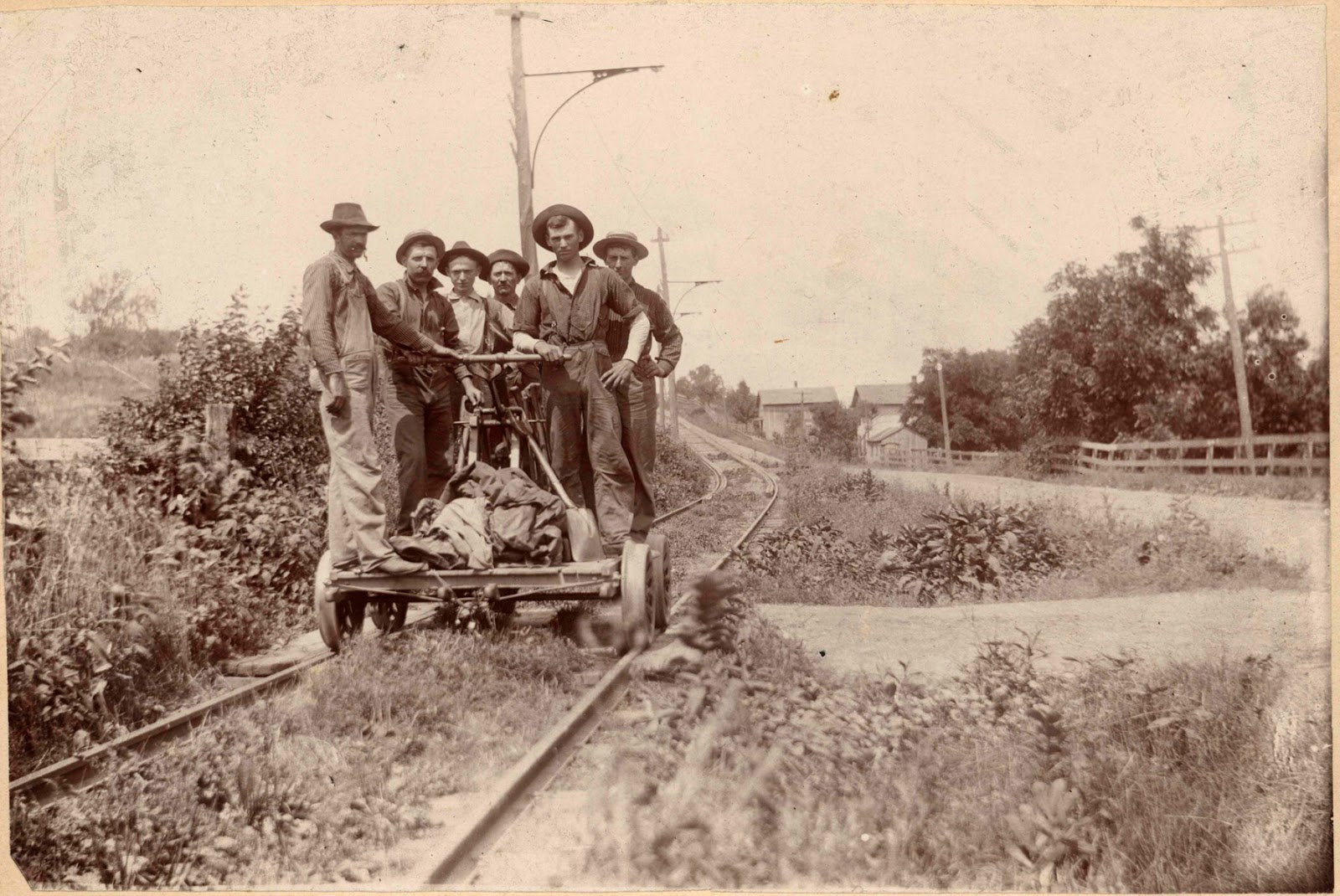 In this undated postcard, several men can be seen alongside an engine of the New York Central Railroad. 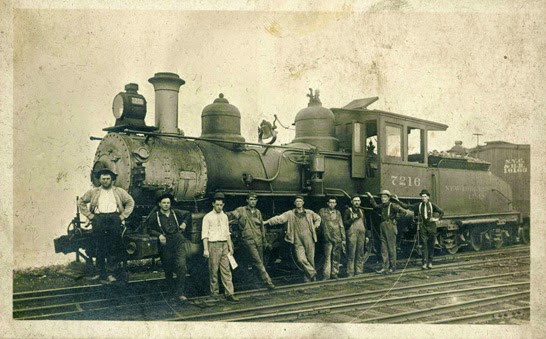 Visit the to view these and thousands of other historic photographs from and .
Posted by Sandusky Library Archives Research Center at 8:00 AM No comments: