Entertainment by the Ladies of Grace Church, 1866

On Monday evening, July 30, 1866, the ladies of Grace Church directed an entertainment at Norman Hall. Funds from the evening’s events were to be given to the church. Several tableaux vivants were exhibited, which represented various scenes and characters. Both vocal and instrumental entertainments were provided during the concert portion of the program. Refreshments of ice cream and cake were to be served after the evening’s entertainment concluded. Fifty cents was the price of admission, which would be about $7.00 in today’s economy.

Many years later, in an example of Tableau Vivant, Mrs. James Douglas posed as Whistler’s Mother at a meeting of the Art Study Club in Sandusky.

Posted by Sandusky Library Archives Research Center at 11:59 AM No comments:


According to the Sandusky Star of September 5, 1904, Harry Garling taught private swimming lessons at the Cedar Point beach every morning. Mr. Garling and his wife moved to Lakewood, Ohio where they were proprietors of a restaurant. Sadly, they both died on the same day, on October 18, 1940. Many of the young bathhouse employees were members of athletic teams of Sandusky High School. Paul Savanack became an Episcopalian minister, and Norbert Lange went on to become a chemistry professor who is well known for writing the classic text Handbook of Chemistry.

Another well known employee of Cedar Point was Knute Rockne, who perfected the forward pass on the Cedar Point beach with his college roommate Gus Dorais in the summer of 1913.
Posted by Sandusky Library Archives Research Center at 3:33 PM 1 comment:

Leo E. Wagner married Clara Cable in 1910. Their wedding portraits were a gift to the historical collections of the Archives Research Center of the Sandusky Library from the couples’ son Lawrence. Leo E. Wagner was the son of Michael Wagner, who was born in Germany, and settled in Sandusky in the 1870s. Michael Wagner was the president of Wagner Quarries, which began operating in 1893. Clara Cable was the daughter of Mr. and Mrs. Frank Cable.


For many years, Leo E. Wagner operated a florist shop at the northeast corner of Columbus Avenue and East Monroe Streets. This location was later occupied by Russell’s Flowers, and since 2009 is home to Tre Sorelle Cioccolato. By the late 1940s, Mr. and Mrs. Leo Wagner moved to La Jolla, California. Leo E. Wagner passed away on June 21, 1956, and Clara passed away in 1984.

Dedication of the Progressive Masonic Temple

On July 15, 1945 the Progressive Masonic Temple, home of Progress Lodge No. 85 F. and A.M., was dedicated. The building, located at 2012 Columbus Avenue, was purchased on May 29, 1944, and was remodeled and redecorated for lodge purposes. 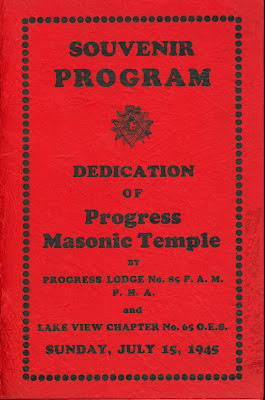 The Progress Lodge No. 85 F. and A.M. began in the 1920s in Sandusky, and was said to be Sandusky’s oldest African American fraternal organization at the time of the dedication of the lodge building. The group met in 1945 on the first and third Monday of the month. In April of 1969, Charles Alexander and Clarence A. Carman were honored with a testimonial banquet; they were the only living charter members of the Progress Lodge 85 F. and A.M. in the spring of 1969. The building located at 2012 Columbus Avenue is now home to the New St. John Masonic Lodge, No. 192. 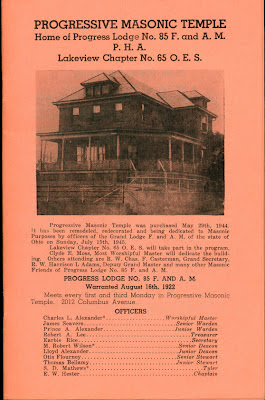 Take a look back at some of 19th century Sandusky’s eating habits, as gleaned from Eliza Follett’s Young Housekeeper’s Assistant cookbook, published in 1876. We’ll also have on hand other early Sandusky-published cookbooks to see what may have graced the tables of our great-grandparents. Registration is not required.
Posted by Sandusky Library Archives Research Center at 9:30 AM No comments: 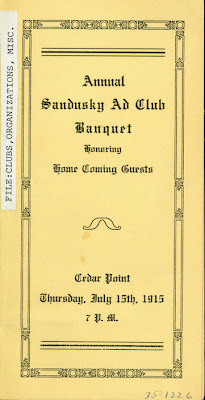 On July 15, 1915, members of the Sandusky Ad Club held their annual banquet at Cedar Point. Special guests were former Sandusky residents who were in town for the community’s homecoming festivities. An article in the Sandusky Star Journal reported that the banquet was “splendid.” Toastmaster for the evening was C.B. Dewitt, the son-in-law of General Henry Axline. Mr. DeWitt, a veteran of the Spanish American War, also went on to serve in World War One. 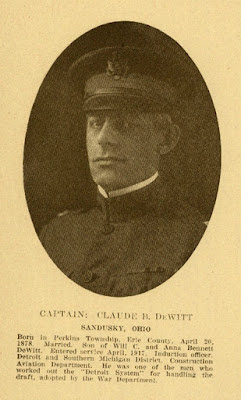 The main speaker for the banquet was Grove Patterson, the acting managing editor of the Toledo Blade. Mr. Patterson stressed the “ability to translate inspirations into action” in his speech which was entitled “The Get-Together Spirit.” 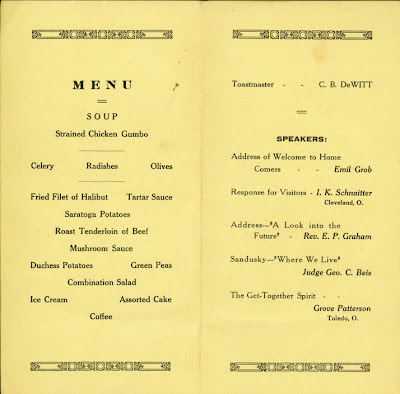 The Sandusky Ad Club was formed in 1913 to promote business in Sandusky, and to further improvements in the community. Eventually the Ad Club merged with the local Chamber of Commerce.
Posted by Sandusky Library Archives Research Center at 8:52 AM No comments: 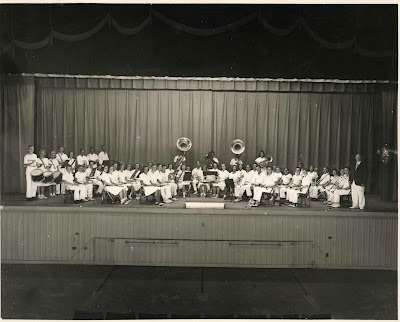 Members of the Ohio Band Camp, which met at Cedar Point, are pictured above in the early 1940s during a performance at . From 1932 to 1944, several students enrolled in the Ohio Band Camp which was held for several weeks throughout the summer. For many years the Ohio Band Camp was directed by Peter F. McCormick, an instructor at in . The student band members performed concerts at Cedar Point, Lakeside, the Ohio Soldiers’ and Sailors’ Home, and other locations around the Great Lakes region. At the summer band camp, students received instruction in band and orchestra, but also took trips to , and . A newspaper article in 1942 reported that the Ohio Band Camp performed a concert at when Eleanor Roosevelt was visiting the summer resort.
Posted by Sandusky Library Archives Research Center at 11:37 AM No comments: 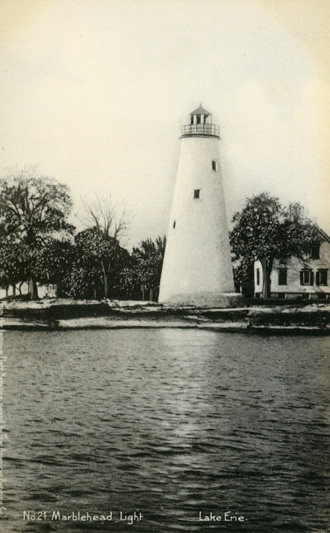 Local history author Pat O’Connell will share some of the fascinating stories and images about the history of lighthouses in Ohio that she has gathered over years of research. She is the author (with her husband Wil) of the book, Ohio Lighthouses, in the Images of America series, published in 2011 by Arcadia Publishing. Her book will be available for purchase and signing. Registration is not required.

Posted by Sandusky Library Archives Research Center at 9:20 AM No comments: 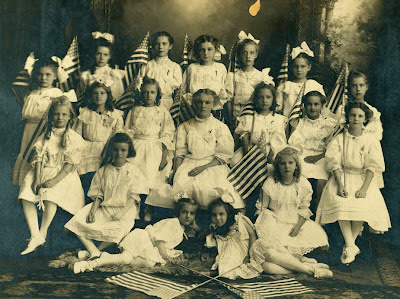 This photograph of eighteen young ladies in a patriotic scene featuring several American flags was taken shortly after the turn of the twentieth century. The only persons identified are Florence Bookerman and Ethel Mae Barber, who are in the back row. (Notes on the back of the photo do not specify the exact location of Florence and Ethel Mae.) The photograph was a gift from Jack Doller, the son of Ethel Mae Barber Doller.


Most of the girls are wearing a small diamond shaped badge that says “Who are you?” It also appears to say "Maccabee Rally" and something else that is not readable. The Knights of the Maccabees was a fraternal organization and insurance society that had a chapter in Sandusky. 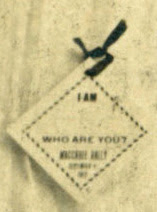 With only the slightest hint of smiles, the young ladies are wearing lovely white dresses, and some have white bows in their hair.

Ethel Mae Barber would eventually marry Howard V. Doller, from a family with ties to Put in Bay.

Ethel Mae Doller was active in the Sandusky Sailing Club, First Presbyterian Church, Business Women’s Club, and the Eastern Star. She died in March of 1966, while her husband died tragically in an accident while he was in Madison, Indiana in 1943. Florence Bookerman never married. She was the daughter of Jacob and Mary Bookerman, and worked at the American Crayon Company.

If anyone knows the names of any of the other young ladies in the picture, please leave a message in the Comments section of the blog post.
Posted by Sandusky Library Archives Research Center at 9:26 AM 1 comment: 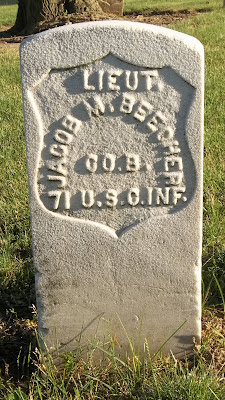 Jacob M. Beecher, the son of Lines and Jane Beecher, was the nephew of prominent Sandusky lawyer and abolitionist Lucas Beecher. During the Civil War, Jacob M. Beecher served in three separate units. He enlisted as a Private on April 25, 1861 at the age of 18, in Company E of the Seventh Ohio Infantry, serving until August 22, 1861. Later he re-enlisted in Company E, 72nd Ohio Infantry. Because of "gallant service," Jacob M. Beecher was appointed Lieutenant in the 71st U.S.C.T. In 1904, Jacob M. Beecher became widowed after the death of his wife Mary. He eventually became a resident of the Ohio Soldiers' and Sailors' Home, now known as the Ohio Veterans Home. On January 20, 1919, Jacob M. Beecher passed away. He was buried in Section F of the Ohio Soldiers' and Sailors' Home Cemetery. Mr. Beecher left behind four sons and four daughters. Two of his sons served in France during World War One.

Posted by Sandusky Library Archives Research Center at 10:21 AM No comments: