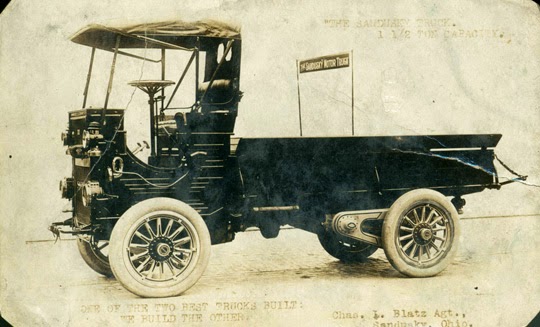 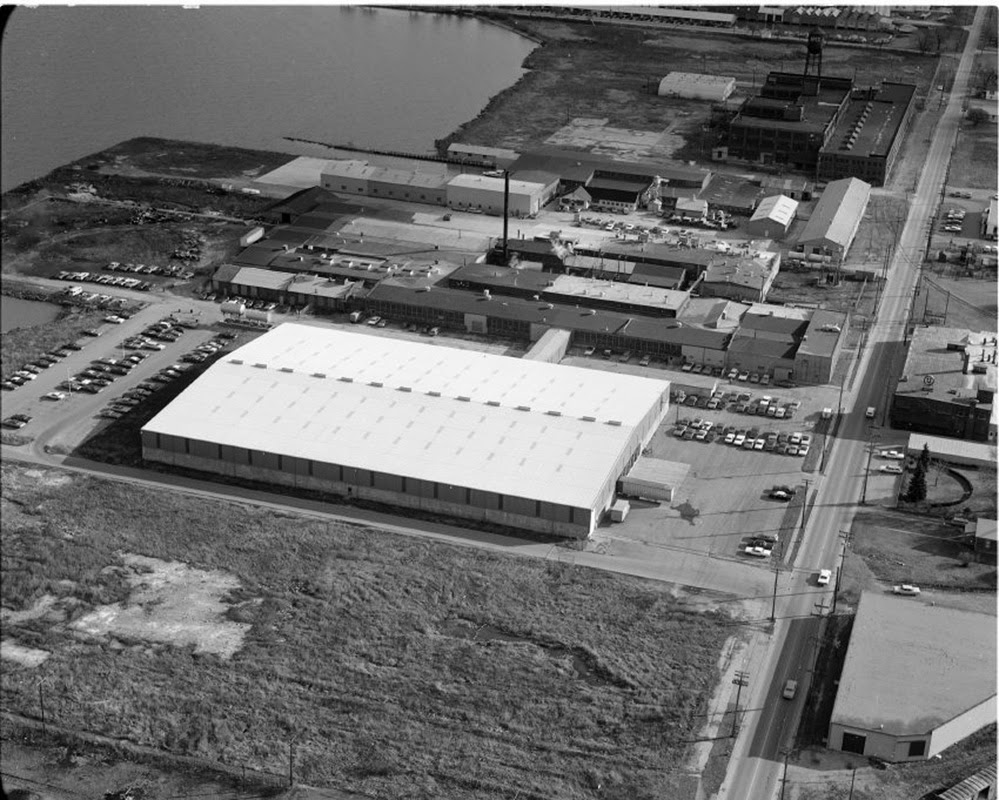 The Sandusky Auto Parts and Truck Company manufactured commercial trucks, motors, axles and transmissions. One of the features of the truck was that it had a removable power unit. A test drive of one thousand miles was successful, and the company showed great promise, but it went into receivership by 1913. The 1912 Sandusky City Directory listed these men as the officers of the Sandusky Auto Parts and Motor Truck Company: A.F. Knotts, President; J.J. Dauch, Vice President; R.D. Mitchell, Secretary; and Daniel E. Storms, Treasurer and General Manager.
Posted by Sandusky Library Archives Research Center at 12:33 PM No comments: 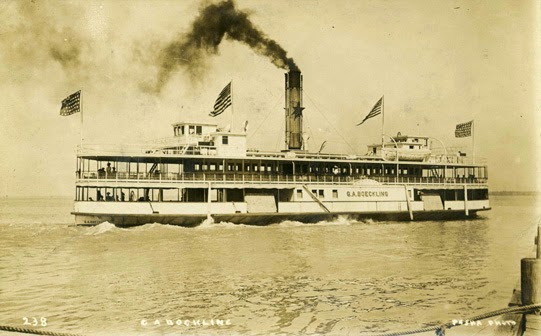 The steamer G.A. Boeckling was built by the Great Lakes Engineering Works in in 1909, named in honor of George A. Boeckling, the president of Cedar Point. 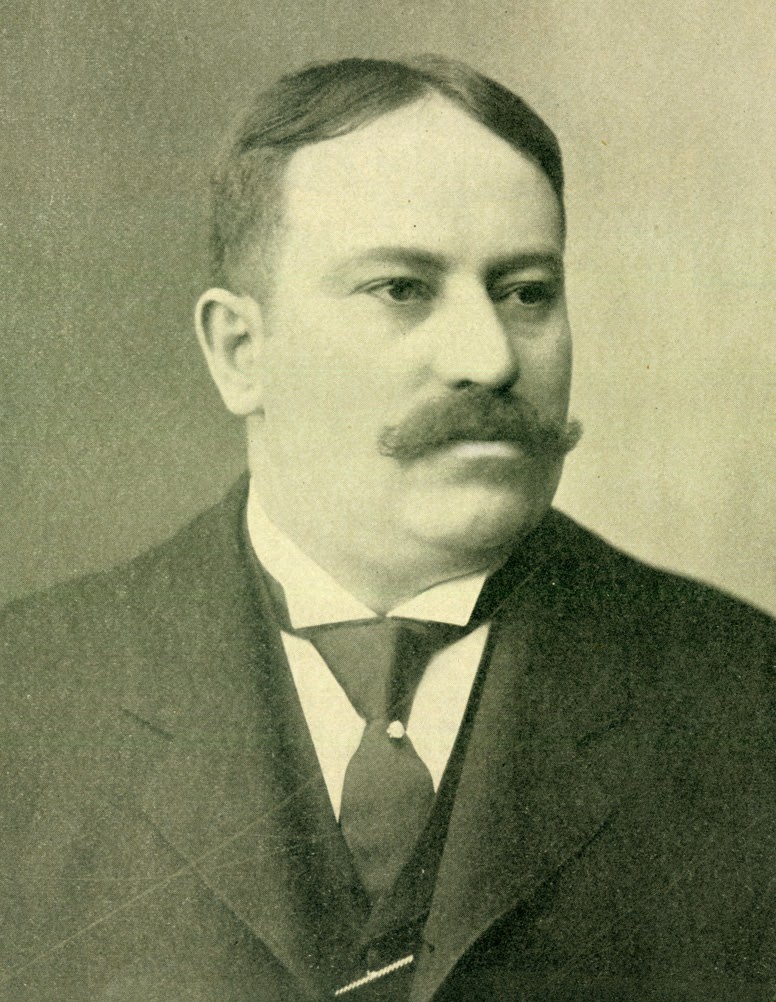 This vessel was designed to carry 2,000 passengers, and cost $120,000 to build. On June 26, 1909, the G.A. Boeckling was christened with a bottle of Hommel’s White Star Champagne. The next day the Boeckling began ferrying passengers from to Cedar Point, and continued to do so until the end of the season in 1951. The 155 foot long steamer had a pilot house at each end, which enabled it to travel in both directions without the need to turn around. A crew member is pictured outside the pilot house about 1949. 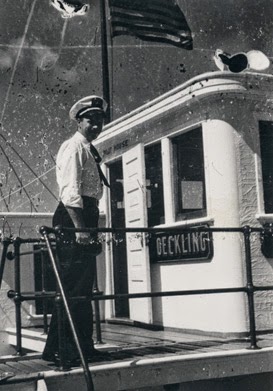 There were two passenger decks on the G.A. Boeckling. 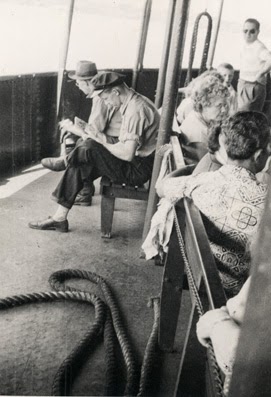 While onboard the Boeckling, a lovely view of the city of was visible as the vessel traveled to Cedar Point across . 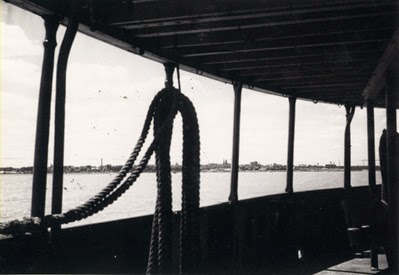 Because of rising costs for fuel and maintenance, along with changes in laws requiring an increased number of crew members, the Bay Transportation Company decided to retire the G.A. Boeckling. Her last trip to Cedar Point was on Labor Day Weekend of 1951.

For several years the Boeckling was used as a floating warehouse and machine shop in . In the early 1980s, a local group was organized in an attempt to restore the steamer. This project ceased when the Boeckling was destroyed by a fire of suspicious origin as she sat in a shipyard on June 21, 1989. The G.A. Boeckling carried thousands of passengers to Cedar Point for over forty years. Have you ever heard your parents or grandparents mention their travels aboard the Boeckling?
Posted by Sandusky Library Archives Research Center at 11:40 AM 5 comments: 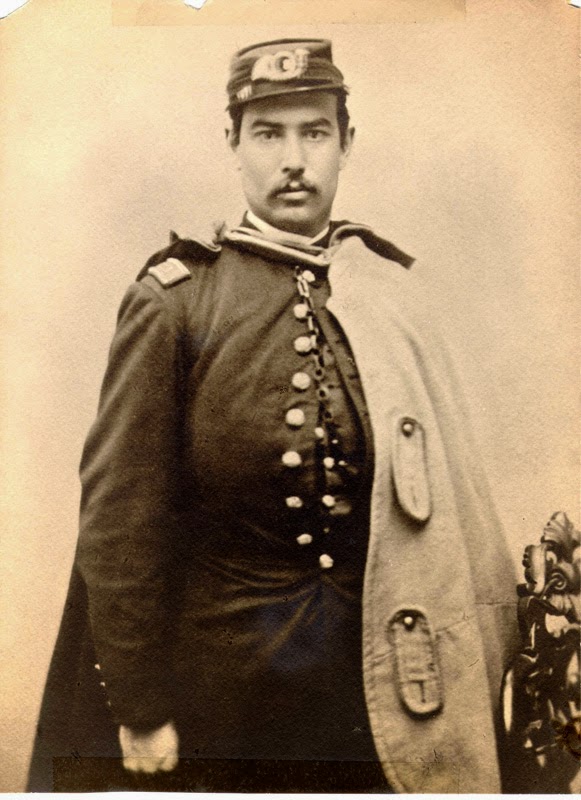 Edgar N. Wilcox was born in 1837, the youngest child of Franklin and Julia (Root) Wilcox. In 1850, census records indicate that Edgar was age 13, and residing with his parents and brother in Huron, . Edgar was an 1860 graduate of the . On June 19, 1861, Edgar N. Wilcox enlisted in the 7th Ohio Volunteer Infantry. Shortly after his enlistment, he sent this letter to his sister Lottie from in . He signed the letter “Ned.” 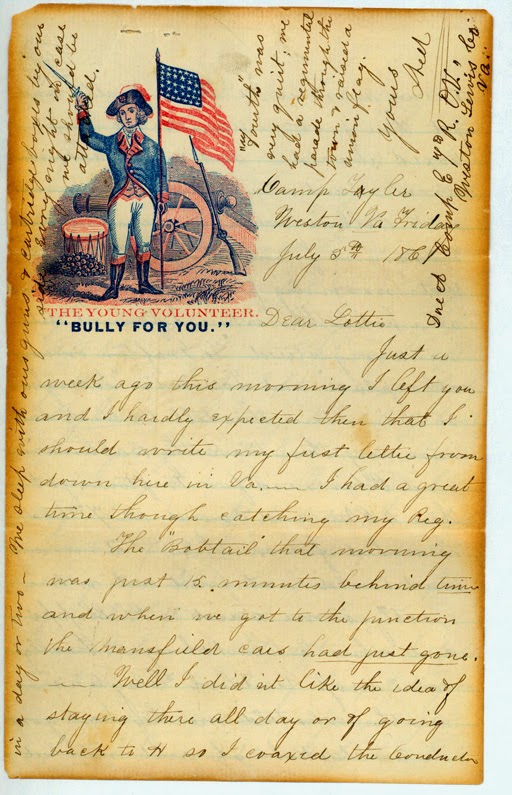 Here is a transcription of Edgar’s letter. 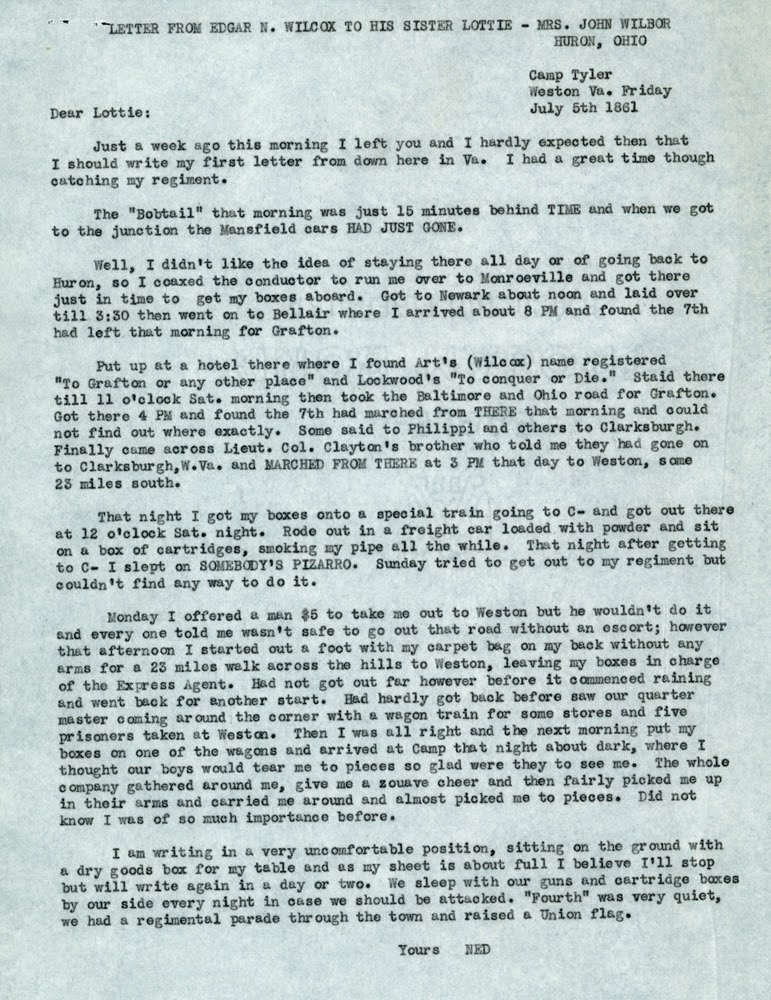 In his letter, Edgar talked about sleeping with guns and ammunition by his side, and celebrating Independence Day with a regimental parade and the raising of the Union flag.  Before he mustered out of the 7th Infantry, Edgar was promoted to Full Sergeant. Edgar reenlisted in the 18th U.S. Infantry. On September 30, 1863 he was promoted to Full 1st Lieutenant. On September 1, 1864, he was promoted to Brevet Captain. During his war time service, Edgar N. Wilcox participated in many battles, including , , , and the campaign. After the Civil War ended, Edgar remained in military service, and worked as a military recruiter at and David’s Island, New York. Edgar Wilcox mustered out of military service on June 1, 1871. In the 1880 U.S. Census, Edgar was living with his brother, Lucien Wilcox, in Huron, . On September 10, 1884, Edgar N. Wilcox was admitted to the National Home for Disabled Volunteer Soldiers in . He died on March 13, 1887, and was buried at the .

You can learn much more about the Wilcox family in the Wilbor and Wilcox Family Collections, housed at the
Posted by Sandusky Library Archives Research Center at 7:49 PM 1 comment: 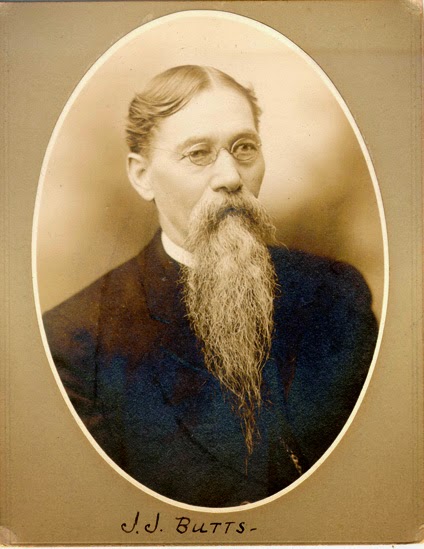 According to his death record, Joseph Jeremiah Butts was born in on October 20, 1843, to Charles Butts and Anna (Long) Butts.  Most often known by his initials, J.J., the name Joseph Jeremiah Butts has many variations, in a variety of vital and military records. records list his name as J.J. Butts. In the 1870 and 1880 U.S. Census, his name appears at Jerry Butts. In the U.S. Civil War Pension index, his name is listed as Joseph J. Butz. These inconsistencies in names and spellings can make genealogy research quite challenging. By comparing other information, such as his wife’s name and parents’ names, and double-checking addresses provided on the records, it is possible to sort out the facts, in spite of the conflicting information given in the records. In the 1860s, J.J. Butts moved from his birthplace of , to the state of . During the Civil War, J.J. Butts served in Company B of the 105th Illinois Volunteer Infantry. After the Civil War, J.J. Butts moved to , where he was a clerk in the hardware store of Barney & Ferris for several years.  By 1881, he became a partner with Thomas Whitworth in the hardware business of Butts & Whitworth. In 1892, J.J. Butts opened his own hardware store, with his son as his partner. The store J.J. Butts & Son Hardware Store was located in the Sloane Block on in downtown .  Below is a postcard of from 1913, in which the Sloane House and Sloane block can be seen on the west side of . 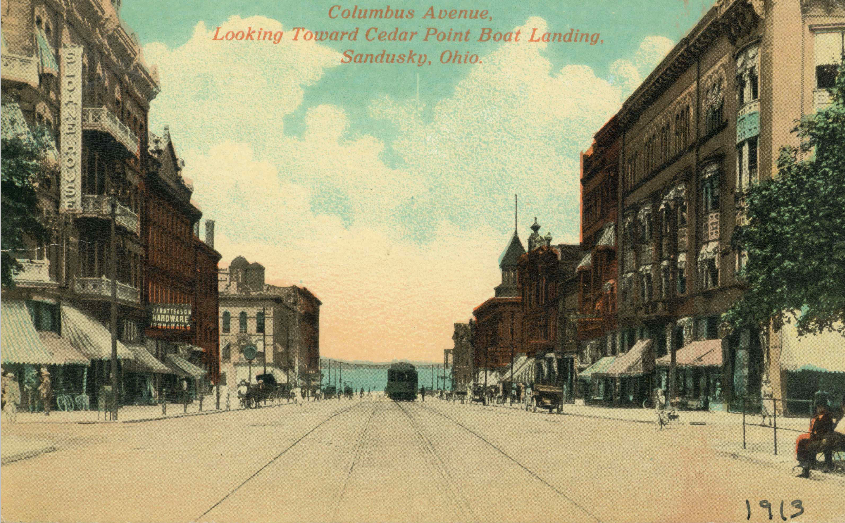 A closer view of the postcard shows the sign of the J.J. Butts and Son Hardware store, which sold iron and nails, and other hardware items. 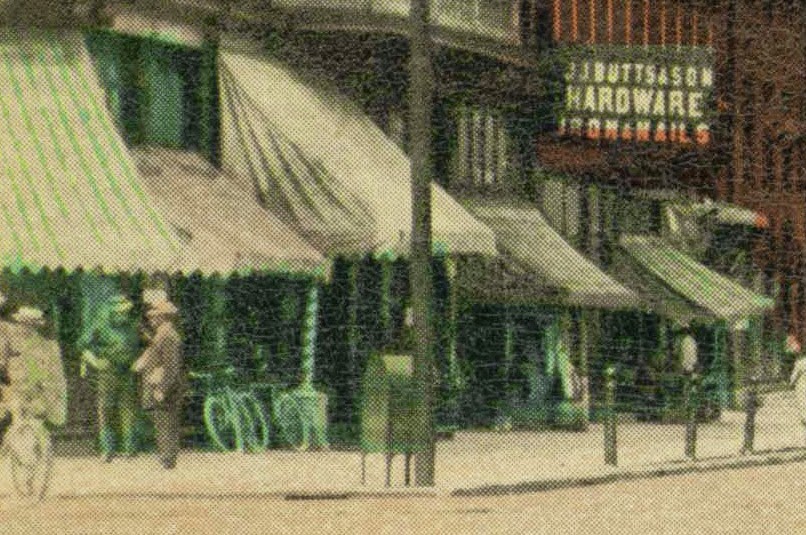 The has transcripts of Civil War letters written by J. J. Butts to his parents during his time in the Civil War. In the letters, J.J. Butts tells about marching to , skirmishes against enemy troops, foraging for food, building bridges, and writing letters by the light of the campfire. He often comments on his well being, in order to comfort his family members back home.  While we do not own the original letters, we are grateful to Butts descendant Douglas Butts, who loaned the letters to the Sandusky Library. Helen Hansen, former Follett House curator, transcribed the Civil War letters written by J.J. Butts.

On September 15, 1927, J.J. Butts died, following a lengthy illness. Funeral services were held at the , and burial was at . He was survived by his wife Mary, son Theodore, and daughters, Mrs. Chauncey F. Lake and Mrs. Edna Buck. An obituary for J.J. Butts appeared in the September 16, 1927 issue of the Sandusky Register.  Visit the if you would like to read the transcripts of the Civil War letters written by J. J. Butts.
Posted by Sandusky Library Archives Research Center at 8:57 AM No comments: 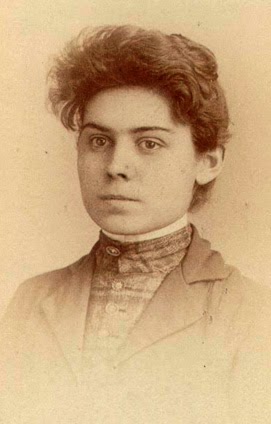 Mary Josephine Deeley was born on November 9, 1868, the oldest of six children born to Benjamin and Eliza Jane (Steen) Deeley. Benjamin Deeley was a carpenter who served in both the 123rd Infantry and 8th Infantry during the Civil War. Mary graduated from in 1888. She taught in the Sandusky City Schools for forty two years. From 1918 until her retirement in 1932, Miss Deeley served as the principal of . 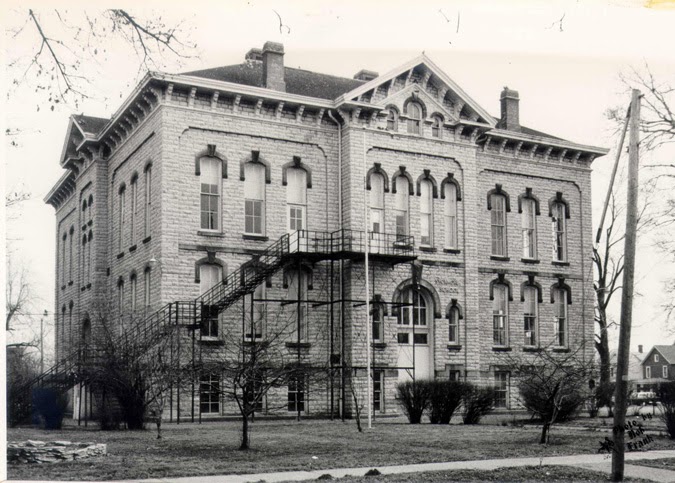 According to a 1921 Sandusky Register article, Miss Deeley organized a film festival in order to raise funds for educational equipment and supplies for . George Schade provided posters, films, a film projector as well as a film operator for the big event. From 1:00 until 9:00 p.m. on December 8, 1921, children as well as adults were treated to four consecutive films “of diversified appeal.” The films were shown in the auditorium of . Over $200 was raised, and was to be used to purchase balls, talking machine records, and other educational items. The December 9, 1921 issue of the Register reported that Miss Deeley stated: “We feel that we cannot sufficiently express our appreciation of Mr. Schade’s kindness.”  During the summer months in the 1930’s, Miss Mary Deeley and her sister Sarah allowed their nephew, future Mount Vernon, Ohio dentist, Dr. George Deeley, to live with them, while he earned money for college by working at Cedar Point.

On November 8, 1945, Mary J. Deeley passed away at Good Samaritan Hospital in . She had outlived all her siblings. She was buried in the family lot at . Mary J. Deeley was a member of the Garden Club, Fortnightly Club, and Grace Episcopal Church. 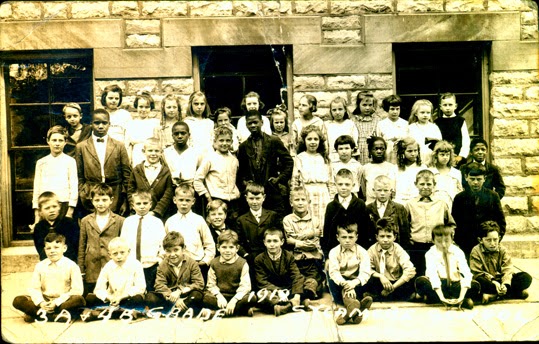 Posted by Sandusky Library Archives Research Center at 11:23 AM No comments: