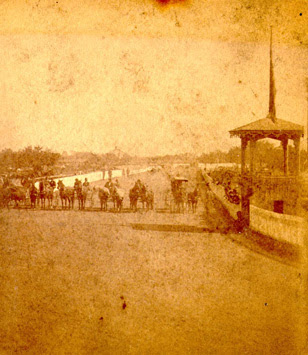 Although we have not had horse races in Sandusky for quite a while, the trotters were popular in town for many years, beginning about 150 years ago.
When the Ohio State Fair was held in Sandusky in 1858 the new fairgrounds (off Wayne Street, where Cable Park is today) included a state-of the-art race track. The Sandusky Register previewed the racecourse in its August 7, 1858 edition, declaring that it "will be one of the finest courses in the state." It was a mile-long oval, fifty feet wide, "with a 'home-stretch' of 100 rods" (2.5 furlongs, or 550 yards). Its inaugural races were held on September 2, 1858, with races all during the state fair in September. Entrants in those early races appear to have been mostly residents of nearby communities who wanted to show off the quality of their horses and their racing carts. Winners at the fair's races received purses of $50. 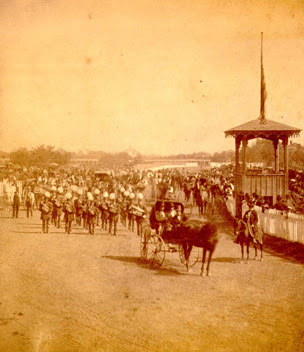 By 1874, the Sandusky Trotting Association was established to manage the races. The first meet sponsored by the Trotting Association began at 10:30 AM on Wednesday, August 1, with eight horse races, and human foot races in between. (Foot races were frequently held on the track.) The highly popular Great Western Band performed throughout the day. (You can see the band marching in an 1876 parade on the track in the image above.) Each race was run as a best-three-of-five, or two-of-three, series of heats. One of the races was a match race between Gottlieb Epple's double team and Clark Center and his horse, Silversmith Maid -- a race the Register said was run as a "side bet." After losing the first heat, Silversmith Maid won the next two races to take the prize. (Sadly, there was no indication as to how much was bet.)
Additional newspaper articles show that the races were still popular into the 1920s, with a track record $5000 purse (worth about $50,000 today) offered on July 30, 1924. 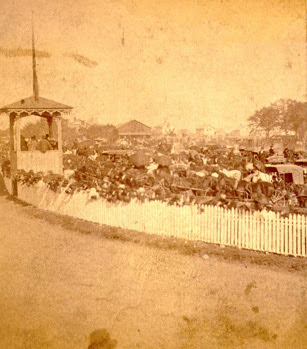 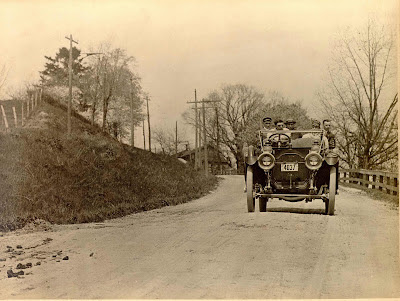 J. Leroy Weier, known as Leroy, is pictured here driving his automobile with 1911 license plates. (We don’t know the names of his passengers.) Leroy’s father, John Weier, along with Leroy’s uncle, Henry Weier, operated a scrapyard business at 1024 Hancock St., which had been started by their father. When the two Weier brothers died in the 1920’s, Leroy continued the family business until shortly before his death in 1971.

Leroy Weier was also the co-owner of the Lake Shore Tire Company. His business partner was Fred Brost. The company operated from about 1915 to 1931. It began as a tire company, but by 1927 it became a sporting goods store. 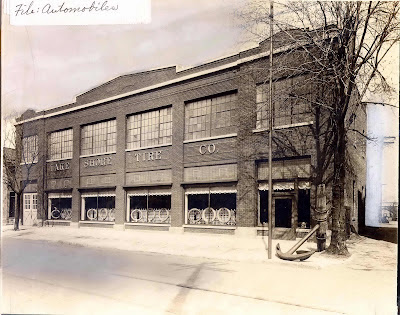 Leroy married Laura Lechler in 1921. They had no children. Around the beginning of World War II, the Weiers began buying property in Middle Harbor and West Harbor in Ottawa County. Leroy was an avid hunter and outdoorsman. An excerpt from a 1969 letter by Leroy Weier appeared in the April 22, 1974 Sandusky Register. Leroy wrote: “The marshes I have known have been the greatest source of pleasure and relaxation and hobby, that have filled my entire life; one must love the feel of cold wind in the face and hear the ripple of freezing water lapping the side of the hunting boat to absorb all the ingredients that nature puts into the thrill we call wildfowling…:”

Before their deaths, the Weiers sold their Ottawa County property to the State of Ohio, and the land now is part of East Harbor State Park. Seven local organizations benefited from the Estate of J. Leroy and Laura J. Weier. The $600,000 was distributed to three area hospitals, the Firelands Council of Boy Scouts, Firelands Council of Camp Fire Girls, and the Sandusky Y.M.C.A.

An early scene from the Weier Brothers Scrapyard is pictured below: 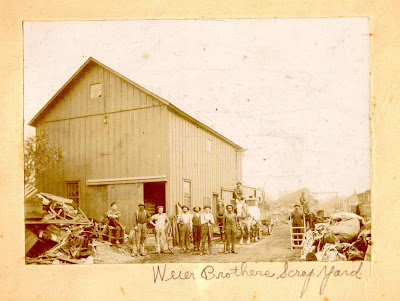 Beginning as Hoffman Coal and Milling Co., the Hoffman Coal Company served the Sandusky area for sixty-five years. In the 1890 city directory, Daniel Hoffman advertised as a dealer in coal and wood at the corner of Scott and Hancock Streets. Later he also sold feed and grain. Daniel’s sons Charles J. and William H. Hoffman took over the business when Daniel retired. Brothers Fred and Daniel Hoffman, Jr. were also associated with the family coal business through the years. Charles and William Hoffman also owned the Electric Glass Cleaner Company in Sandusky.

Below, we see Daniel Hoffman, Sr. with his five sons, at their Masonic induction ceremony. 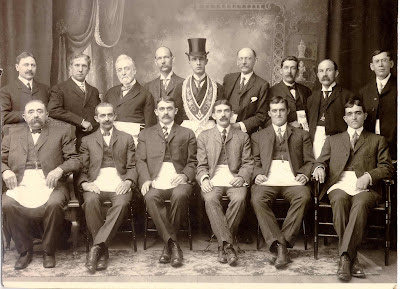 Charles J. Hoffman obtained a patent in 1901 for an elevating truck. The Sandusky Evening Star of August 31, 1903 stated that the handy combination truck is said to be a fine device, “combining all the requirements of elevator, store, mill and warehouse trucks.” This truck is featured prominently in an advertisement for his company, in the 1903 publication What (which also features stereotypes of the era). 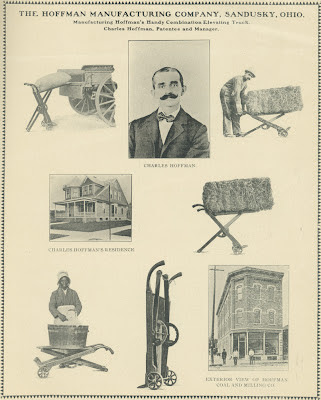 The patent for this truck can be viewed online at the United States Patent and Trademark Office.

The Hoffman family was well known in the Sandusky area. Charles J. Hoffman ran an ice cream and sandwich shop on Scott Street in the 1920’s and 1930’s. The figure “Puck” was located at this site. (You can see views of the shop with Puck on the roof, along with images of the Hoffman Coal Company, at a site operated by a private collector here.) Carlyle Hoffman grandson of Daniel Hoffman, Sr, was a lawyer with the Veterans Administration in Cleveland for many years, and granddaughter Dr. Kathryn E. Hoffman was a physician and surgeon in Cleveland. 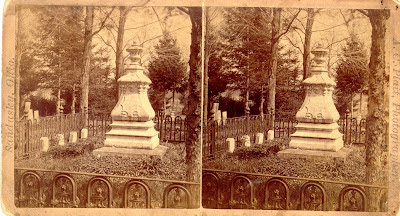 Join Sandusky Library's Museum Curator Maggie Marconi for a new cemetery walk -- Extraordinary Women of Sandusky -- on Wednesday, September 12, at 10AM, or Saturday, September 15, at 10AM or 2PM.

Men and women alike will enjoy this new cemetery walk. Learn about a variety of talented and extraordinary women who called Sandusky home -- including an artist, an opera singer, a probation officer, and the first female vice presidential candidate.
As this is an outdoor walking tour, please wear appropriate shoes and outerwear, and be prepared to walk and stand for at least an hour. Registration is required. To register, call 419-625-3834 and press 0 to speak with a switchboard operator (9-5, Monday-Friday) or press Option 6 to leave a message.
Posted by Sandusky Library Archives Research Center at 2:36 PM No comments:

The town formerly known as Prout or Prout’s Station is located in the north central portion of Oxford Township of Erie County. 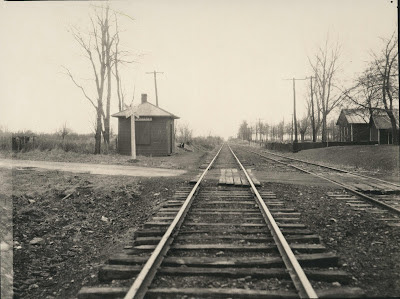 A. W. Prout settled in this location in 1833, purchasing land from George Hollister and Isaac Mills for four dollars an acre. A. W. Prout was an agent of an early railroad line that operated in Oxford Township, and also served as the Postmaster of Prout’s Station. A Post Office was first established as “Wheatsboro Post Office” in 1812, and later operated as Prout Post Office (among other names) until Nov. 14, 1905.

In 1885 a mission church from the St. Anthony’s Catholic Church in Milan was started at Prout’s Station. A school is found at Prout’s Station in the 1896 Erie County Atlas. In the 1920’s the Central Erie Supply and Elevator did a thriving business, handling an estimated six hundred thousand dollars in 1927.

James A. Ryan, in a 1928 Star Journal newspaper article called Frank J. Prout “one of Prout’s Station’s best known sons.” Frank J. Prout (shown below) was Superintendent of Sandusky City Schools from 1921 to 1939. Dr. Prout was appointed to the presidency of Bowling Green State University in 1939, and continued in that position until 1951. Prout Chapel on the BGSU campus is named for Dr. Frank Prout, while a women’s dormitory was named Alice Prout Hall, for his late wife. 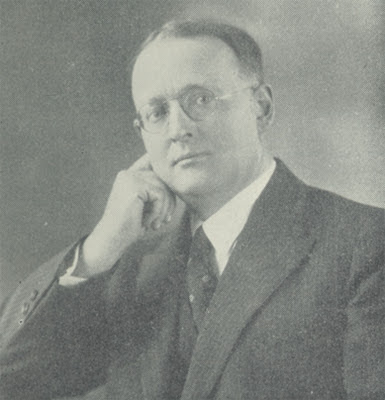 Another Prout descendant, Charles Merz, son of Sakie Prout Merz, was the editor of the New York Times from 1938 until 1961. His editorials in opposition to Senator Joseph McCarthy in the 1950's were influential on American thinking.