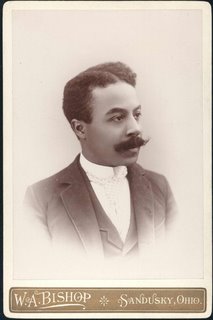 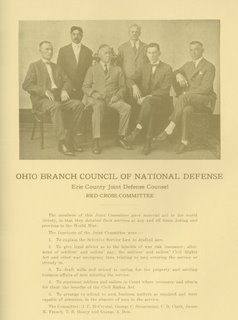 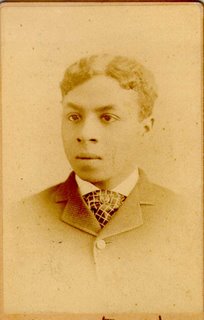 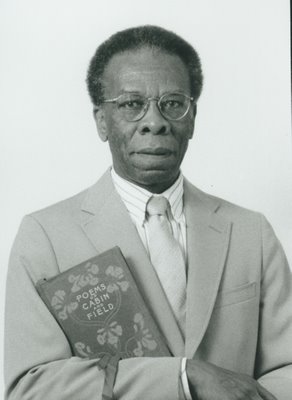 Join us in the Sandusky Library program room this Saturday, February 24, at 2PM, when Dr. Herbert Woodward Martin, Professor of English and Poet-in-Residence at the University of Dayton, will present a talk on "Oral Traditions in African-American Literature,"sponsored by a grant from the Ohio Humanities Council. From the program description on the Ohio Humanities Council website:

Dr. Martin was in Sandusky a few years ago to speak about the poet Paul Laurence Dunbar, a talk that received much praise in the community. You can be sure that this Saturday's program will be equally as interesting. For more information, contact the library at 419-625-3834.

"Since 1972, the Ohio Humanities Council, state affiliate of the National Endowment for the Humanities, has provided leadership, resources, and financial support for the humanities in Ohio."
Posted by Sandusky Library Archives Research Center at 11:27 AM No comments: 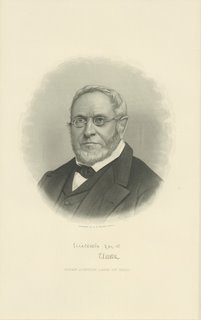 Early Ohio lawyer Ebenezer Lane was a Harvard University graduate who moved to Ohio in 1817. Born in Massachusetts in 1793, he received his degree from Harvard in 1811. After briefly practicing law in New England, he migrated westward and settled in Ohio, where he established his legal practice (around 1817). He was appointed Judge of Common Pleas of the Second Circuit in 1824, and became a Judge of the Supreme Court of Ohio in 1830. After he retired from the court, he had interests in the Junction Railroad, the Mad River and Lake Erie Railroad, and the Illinois Central Railroad.

While Judge Lane lived simply, he was an avid book collector. He read every one of the four thousand books he owned. Rev. Alfred Newton said in his memoirs of Ebenezer Lane that he could so accurately retain the knowledge of what he had read that he was a “walking library.”

Judge Lane’s granddaughter, Mrs. Charles H. Moss, served on the first Board of Trustees of the “Library Association of Sandusky” which was incorporated in 1895. 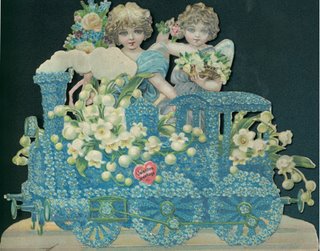 Valentine's Day has been celebrated for centuries in the West. Derived from a Pagan festival, Valentine's Day became a Christian feast day around the fifth century A.D. Today, February 14 is observed as a day for romance (and commerce, in chocolate, flowers, and greeting cards).

Of course, Valentine's Day was celebrated in Sandusky from its earliest days. Items from the collections of the Sandusky Library Archives Research Center and Follett House Museum provide evidence of Valentine's Day observances in Sandusky. The Valentine train above is one of many Victorian-era Valentines from the Follett House collections. Below is an excerpt of a letter written by "Lizzie" to her "Dear Friend Jennie," where she talks about (not) receiving Valentines, and attending a Valentine party that year: "I hope you received a number of good valentines . . . " 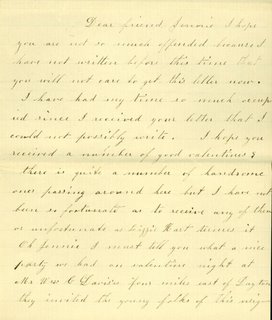 The note below is a love letter to Lucian Wilcox to his "Valentine" in 1852: "Brief was our meeting and my heart knew not / How deep the impress of thy image lay / Long silent years since then have lapsed away / And I have toild to reach a fairer lot / In the stern struggle tender hope forgot / But now the dawn of a diviner day / Has waked the patient [?] with its ray / And clothed with bloom the once abandoned spot / Love from its fetters breaking looks for thee." 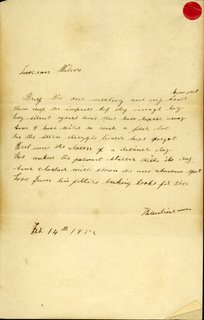 Below are two of the earliest Valentines from the Follett House collections (from the 1850s): 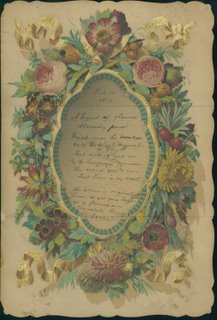 Posted by Sandusky Library Archives Research Center at 10:08 AM No comments:

Emogene Niver Marshall and Her Civil War Memorial to Her Brother 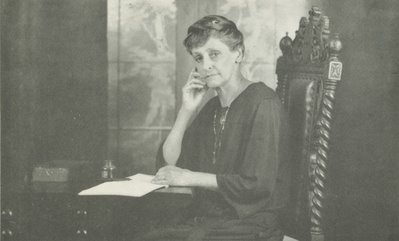 Mrs. Emogene Niver Marshall was a well known Sandusky resident who died in 1935, at about 85 years old. She gave many years of service to the Soldiers and Sailors Home (now the Ohio Veterans Home), giving entertainment to the residents and cheering the sick in the hospital. Emogene was married to Joseph T. Marshall, who served in the 101st Ohio Volunteer Infantry in the Civil War. Though Mr. Marshall had never been a resident of the home, over four hundred persons associated with the Soldiers and Sailors Home attended the funeral service Joseph T. Marshall in 1910, to show their respect and appreciation to Emogene Niver Marshall for her service at the Home.

She had an elder brother, Edwin M. Niver, about five years older. In 1861 Edwin enlisted in the 3rd Ohio Volunteer Calvalry, before he reached his seventeenth birthday, and served in battle through Tennessee and Alabama. He was captured by Confederate forces in November 1863, and sent to the Confederate prison at Andersonville, Georgia, where he died on June 19, 1864. 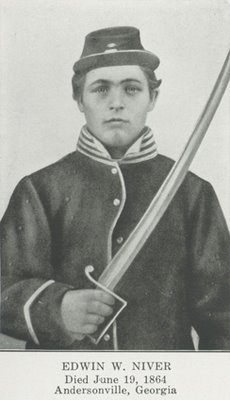 In 1932 Emogene Niver Mashall wrote a book in memory of her brother and his service in the war. In this book, REMINISCENCES OF THE CIVIL WAR AND ANDERSONVILLE PRISON, you can read the letters that Edwin M. Niver wrote home to his family. Emogene writes of the dreadful conditions of the prison, and includes a lengthy poem honoring the dead heroes buried at Andersonville. In the foreword to the book, E.H. Mack, Editor of the Sandusky Register states that Mrs. Emogene Niver Marshall was called the “Angel of the Home.” To view Mrs. Marshall’s tribute to her brother, inquire at Reference Services located on the Lower Level of Sandusky Library.
Posted by Sandusky Library Archives Research Center at 2:43 PM No comments:

Mystery Photos: Know Where This Is? 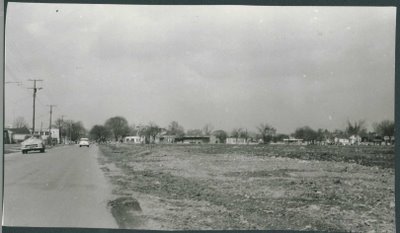 After a hiatus, the "Mystery Photos" game is back. Here are two photos showing different views of the same location. It looks a lot different today, but if you look very closely, you might be able to recognize where it is. 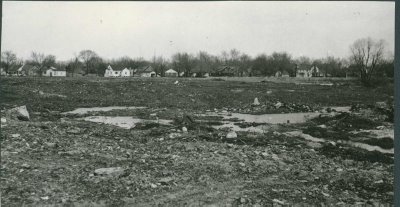 Hints: Both pictures were taken in March 1955, and the scenes in the images are within the city limits of Sandusky.

The answer is in the comments section.
Posted by Sandusky Library Archives Research Center at 10:12 AM 1 comment: