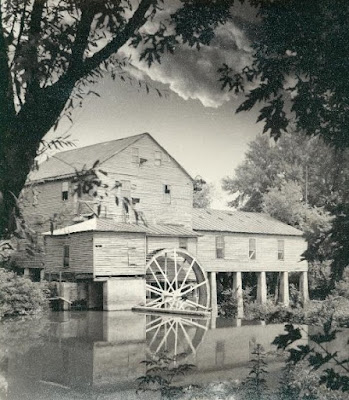 Pictured above is the Venice Mill, run by the Gallagher brothers, John R., Arthur P., and James S. Gallagher, dating back to the 1930s or 1940s. The site is now occupied by the Margaritaville restaurant.

According to an article in the July 3, 1988 issue of the Sandusky Register, the Gallagher brothers purchased the Venice Mill in 1897, which had formerly been run by several generations of the Heywood family. Russell Heywood purchased the old mill in Venice in 1831, at the southeast corner of what now is Fremont Street and Venice Road, along with the rights to Cold Creek and five hundred acres of land. A second mill was built by Mr. Heywood in 1841, but was destroyed by fire. An early canal system transported the wheat and flour from the mills to the bay, where it was shipped by boat. Later railroad cars transported the grain. Members of the Gallagher family operated the mill until the late 1940s. The family also owned a flour, feed, and coal business in Sandusky on East Water Street. This building still stands and is known as the Granary. In 1955 Harold Coker bought the old mill. He and his wife Gertrude built a restaurant and bar known as the Old Mill on the site of the Venice Mill. Three of the original walls from the mill were used in the new tavern. In the early 1980s John Kubicek and Nick Porozynski remodeled the Old Mill tavern and re-named it Margaritaville. An early history of water powered historic mills, found on the back of an old menu from Margaritaville, is now housed at the Sandusky Library Archives Research Center.

This old flour sack from the Venice Mill, when it was run by the Gallagher family, is at the Follett House Museum. 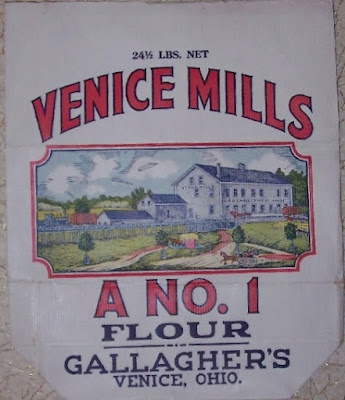 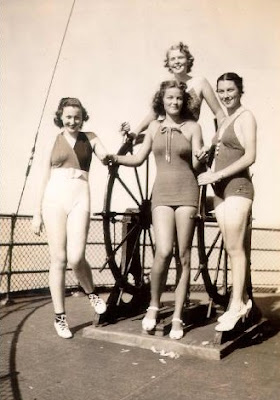 Beryl Starr, a young man, and the pilot pose on a "flying boat" airplane in in the 1920s. 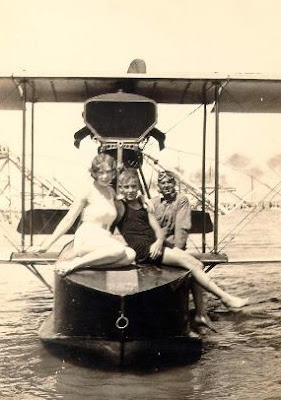 Cedar Point’s sandy beach has been attracting swimmers for more than a century. 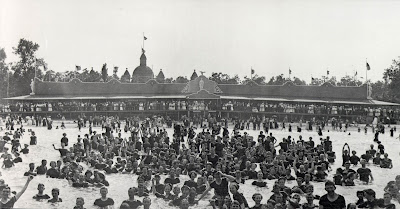 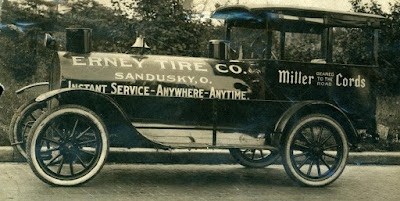 From about 1921 to 1931, the Erney Tire Company sold and serviced tires for automobile owners in the Sandusky area. Norbert G. Erney was the president and general manager.  In the early 1920s, the business was at 163-165 Jackson Street. In 1921, they sold Miller tires, especially for Ford cars. Staff from the company would deliver and install new tires to any automobile within a fifteen mile radius of the store.

In April of 1927, the company moved to a new building at 919 West Washington Street. A special newspaper supplement devoted to the Erney Tire Company appeared in the April 8, 1927 issue of the Sandusky Star Journal. 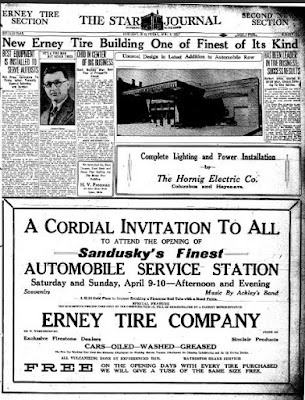 Ackley’s Band provided music for the grand opening of “Sandusky’s Finest Automobile Service Station.” Services offered there included tires, road service, vulcanizing, tubes, washing, greasing, gasoline, oils, and brake service. By 1929, the company also sold and serviced radios for automobiles. It was felt that having a radio in one’s automobile helped prevent boredom on a long road trip, and provided a diversion from the roar of the motor and the rumble of the tires. 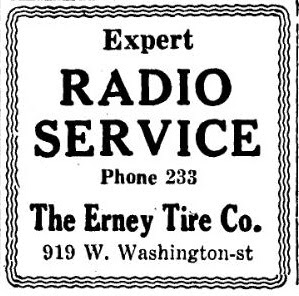 In 1931 the Erney Tire Company began selling Firestone tires and batteries. By the summer of 1931 a Firestone Service Store took over the business. Below is a portion of the large advertisement from the July 25, 1931 issue of the Sandusky Register. 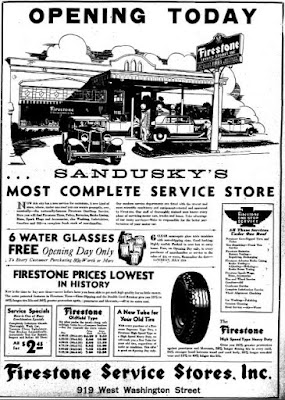 Mr. Norbert G. Erney went on to work as an accountant at Farrell Cheek for several years, but he was long remembered for his excellent leadership and service at the Erney Tire Company when the automobile era was still in its infancy.
Posted by Sandusky Library Archives Research Center at 9:00 AM 1 comment: 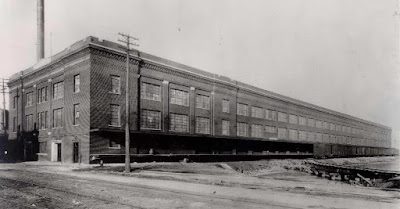 For several decades, the Hinde and Dauch Paper Company was a leading company in the production of corrugated paper products. James J. Hinde is credited with developing the corrugated process that revolutionized the shipping industry in the early 1900s. Below is an advertisement for an early bottle wrapper that allowed products in glass containers to be shipped safely. 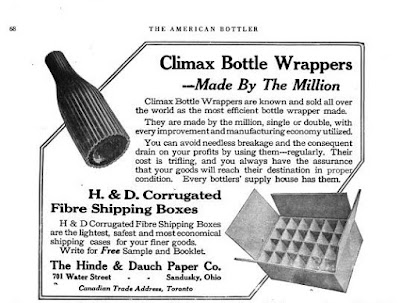 The American Crayon Company began with the development of chalk being molded into a stick. Later the company made crayons and other educational products, and provided employment for hundreds of area residents. 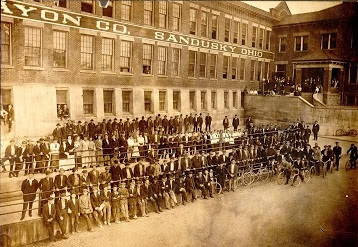 Willard A. Bishop was a photographer in Sandusky for many years. (You can see several of Mr. Bishop’s photographs at the Sandusky Library Archives Research Center.) 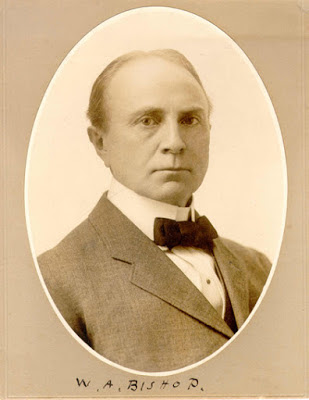 He was issued a patent for a copying camera in 1914. 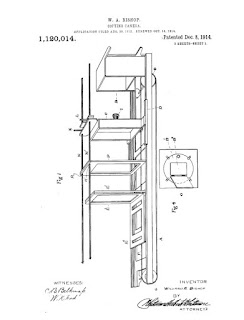 Wilbert G. Schwer was issued Patent Number 1,696,584 on December 25, 1928, while he was associated with the Sandusky Tool Company. His patent related to the improvement of planes. 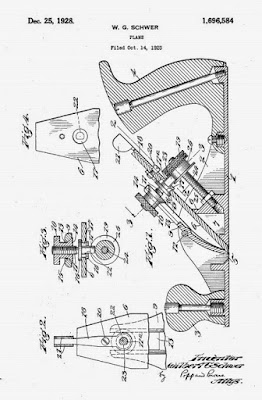 Though the company went out of business in the late 1920s, planes from this firm are still highly sought after by collectors.

Did any of your ancestors have a patent issued to them? It is easy to search Google Patents by keywords. For example, by putting in the terms "Otto Kromer" and "Sandusky," a search retrieved several patents by Mr. Kromer, a former Sandusky resident who was well known as a machinist in the late 1800s.
Posted by Sandusky Library Archives Research Center at 9:00 AM 1 comment: 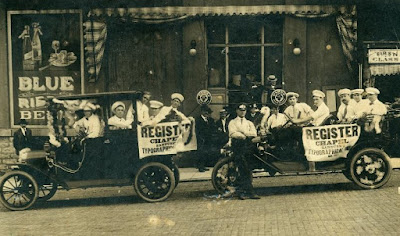 In the photograph above, members of the Sandusky Register “Chapel” of the Typographical Union fill up two vintage automobiles in downtown . The cars appear to be decorated for a parade. (Possibly the Perry's Victory Centennial Parade?) The picture was taken in front of the Pabst Cafe, between 1910 and 1913, which was located at the northeast corner of and , not far from the Sandusky Register building, which was at . (The street numbers indicate that the picture was taken before the 1915 change in the street numbering system.)  The proprietors of the Pabst Cafe and Grill Room at that time were Moe Frohman and Frank Elzenheimer. Note that the street is paved with bricks. To see this and many other historical photographs of and , visit the . 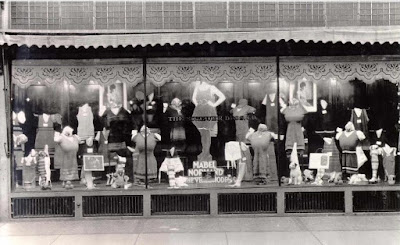 The Scheuer Brothers Company was located in the Graefe Building on East Market Street. 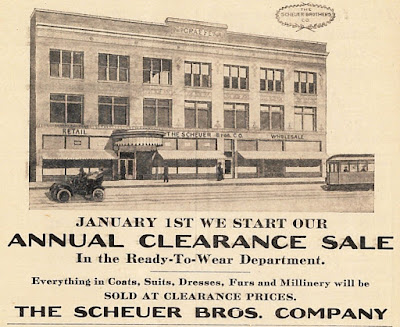 The advertisement above for the Scheuer Brothers appeared in the December 1912 issue of the Fram. In 1919, William S. Frankel acquired the interests of A. J. Scheuer, and the store became known as the Scheuer-Frankel Company. Around 1929, Frankel became the sole owner of the business, and it was known as the William S. Frankel Company. After he passed away in 1949, his son took over the business. Frankel’s was a popular department store for area residents until the mid 1960s. 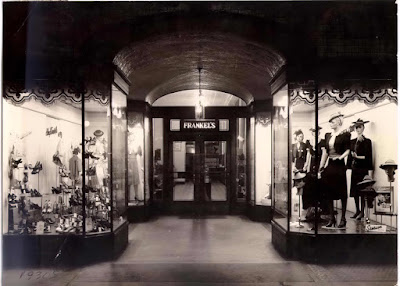 Opening of the Fraternal Order of Eagles Building in 1931 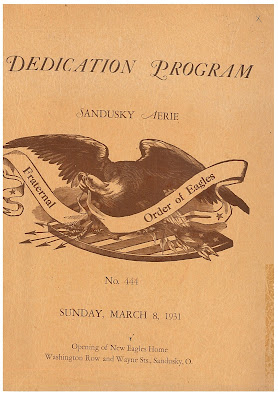 The Fraternal Order of Eagles was founded in 1898 by a group of Seattle theater owners, developing into a community service organization. The Aerie of Eagles, No. 444 was organized at a meeting at Link’s Hall on July 30. 1913. For several years, the local Eagles members met at the Odd Fellows’ Hall. On April 27, 1930, ground was broken for a new Eagles building, at the northwest corner of Washington Row and . 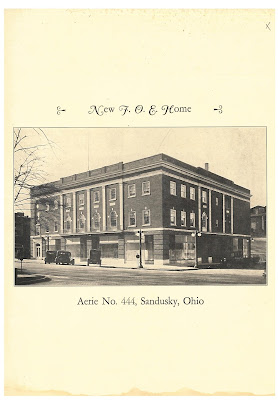 Alfred Schnurr was the general contractor for the building, and Harold C. Parker was the supervising architect. The coal–fueled heating system and modern plumbing equipment were supplied by Brohl and Appell. A leading tinner in , Jacob Wilken, did the sheet metal work for the new Eagles building, which included downspouts, a sky light, ventilators and louvers. The latest type of electric wiring was installed by Diamond S Electric, while the electrical fixtures were installed by the Ohio Public Service Company. The Herb and Myers Company furnished the lodge’s chairs, tables, and ceremonial altars. Several lodge chairs were made from tan leather. The lumber and mill work in the new Eagles home were furnished by the Sandusky Sash Door and Lumber Company. The Mack Iron and Works provided stairs, railings, grating and other iron items used in the new Eagles building.

The new Eagles home was dedicated on Sunday, March 8, 1931. A parade commenced at 1:30 p.m., with Eagles from all over the state of in participation. Conrad H. Mann, Head of Insurance Department, was the main speaker. Ritualistic ceremonies were conducted by the Degree Team of Akron Aerie, No. 555. A public meeting was held at 8 p.m., with Deputy Grand Auditor H.J. Berrodin, acting as toastmaster. Conrad Mann spoke again at the public meeting, and entertainment was provided by the Fraternal Order of Eagles Quartette from .

Pictured below are four members of the Sandusky Eagles, most likely from the 1920s. The men are: Charles Simon, Charles Sinerson, Jacob Wilken and Robert Rheinegger. 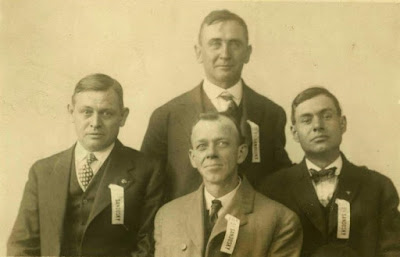 Visit the to view the dedication program from the opening of the Fraternal Order of Eagles, , Aerie NO. 444 in 1931, or to view historical newspaper articles about the event.
Posted by Sandusky Library Archives Research Center at 9:00 AM No comments:

Pictures of the Cedar Point Beach by Henry Suehrstedt 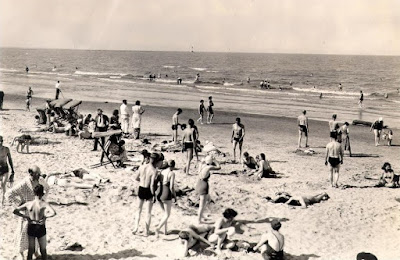 Several pictures taken at the Cedar Point Beach were donated to the Sandusky Library Archives Research Center by Henry Suehrstedt.  They were most likely taken in the 1950s.

A covered shelter provides some shade to beach goers in this view of the beach. 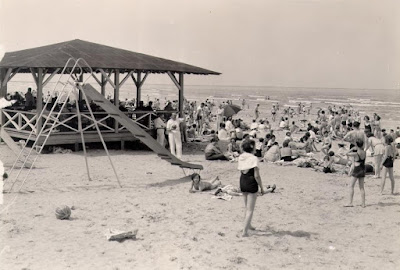 It appears that some visitors to Cedar Point preferred to sit and watch others enjoying the cool waters of Lake Erie. 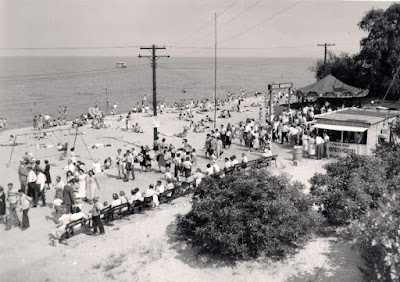 According to Mr. Suehrstedt’s obituary in the January 31, 1985 issue of the Sandusky Register, he was employed as an engineer for the Plum Brook Ordnance Works, and served as a building inspector for the City of Sandusky. Later he worked as an engineer at Cedar Point, and was responsible for designing several buildings at the amusement park, including the train station for the Cedar Point and Lake Erie Railroad.
Posted by Sandusky Library Archives Research Center at 9:00 AM No comments: 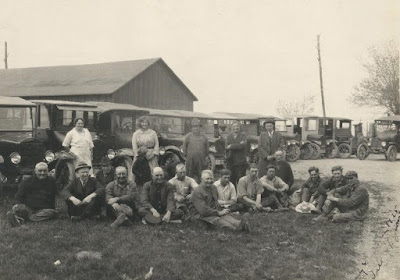 Cleveland photographer Ray Williams took this picture in 1925 at Isle St. George on North Bass Island. Notes on the original item indicate that the group is from Sandusky. The picture was bequeathed to the Sandusky Library Archives Research Center from the Alta Dildine estate. None of the individuals in the picture have been identified. The group includes seventeen men, two women, and a child. Seated on the left are older gentlemen, who probably knew all too well the meaning of hard work.

Seated at  the right side of the picture are younger men, full of vim and vigor. 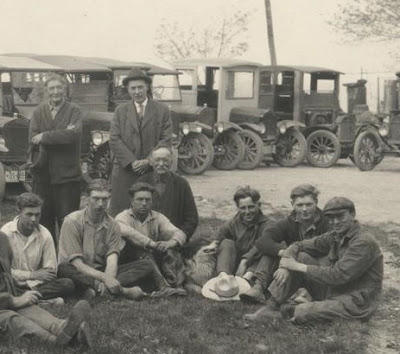 Many vintage automobiles can be seen in the photograph, but it is not known whether the autos belonged to residents of Isle St. George, or if they were ferried over from the mainland. If anyone can identify the people in this picture, please leave a message in the Comments section of this blog post. In the 1920s, the Sandusky Register featured a short column of news from Isle St. George. These columns were usually about visitors to and from the island.
Posted by Sandusky Library Archives Research Center at 9:00 AM No comments: 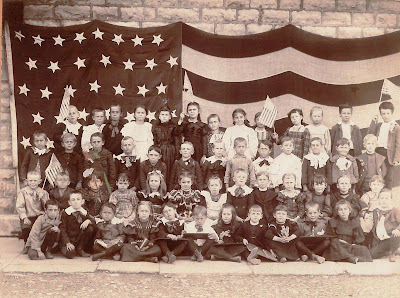 While we do not know the date or exact location of this photograph, notes on the back of the original picture indicate that it was taken by the Pascoe Galleries in Sandusky. Several youngsters are pictured in front of a large flag in front of a stone building, in the late 1800s or early 1900s. Many children are holding flags, suggesting that they may have recently been studying the history of the United States. This item is housed in the James Duff Archival Collection at the Sandusky Library Archives Research Center.

Posted by Sandusky Library Archives Research Center at 9:00 AM 3 comments: