Elmer J. Frank was born in Sandusky in 1904 to Julius and Emma Frank, both of German descent. As a youth, Elmer studied piano with Elmer F. Steuk, a well known Sandusky piano instructor. In 1931 he went to Austria to study piano under Madam Bree. He also studied composition, harmony, and instrumentation under Johanna Muller Herman, and choral and orchestra conducting under Professor Julius Katay. Mr. Frank’s musical studies took him also to Germany, France, Switzerland, Poland, Czechoslovakia, Hungary, Romania, Italy, and Tunisia. During the summer of 1939 he was on a scholarship in Poland to study folk and classical music, and while there, Poland was conquered by Nazi Germany. Luckily he made it home safely. During World War II, he served for two years in the Panama Canal Zone with the United States Army.

Back in the United States, Elmer Frank was the organist and choir director for several churches. He also taught music for several years, having studios in the Odd Fellows Hall and later in the Feick Building. He organized the Sandusky Choral Society and the Sandusky Male Chorus, and served as the director of both organizations for many years. Later he was the director of music at the International School of Art, which was at 507 Wayne Street.

Mr. Frank is the conductor in the group picture of the Sandusky Choral Society, taken around 1940 by photographer William Mound. 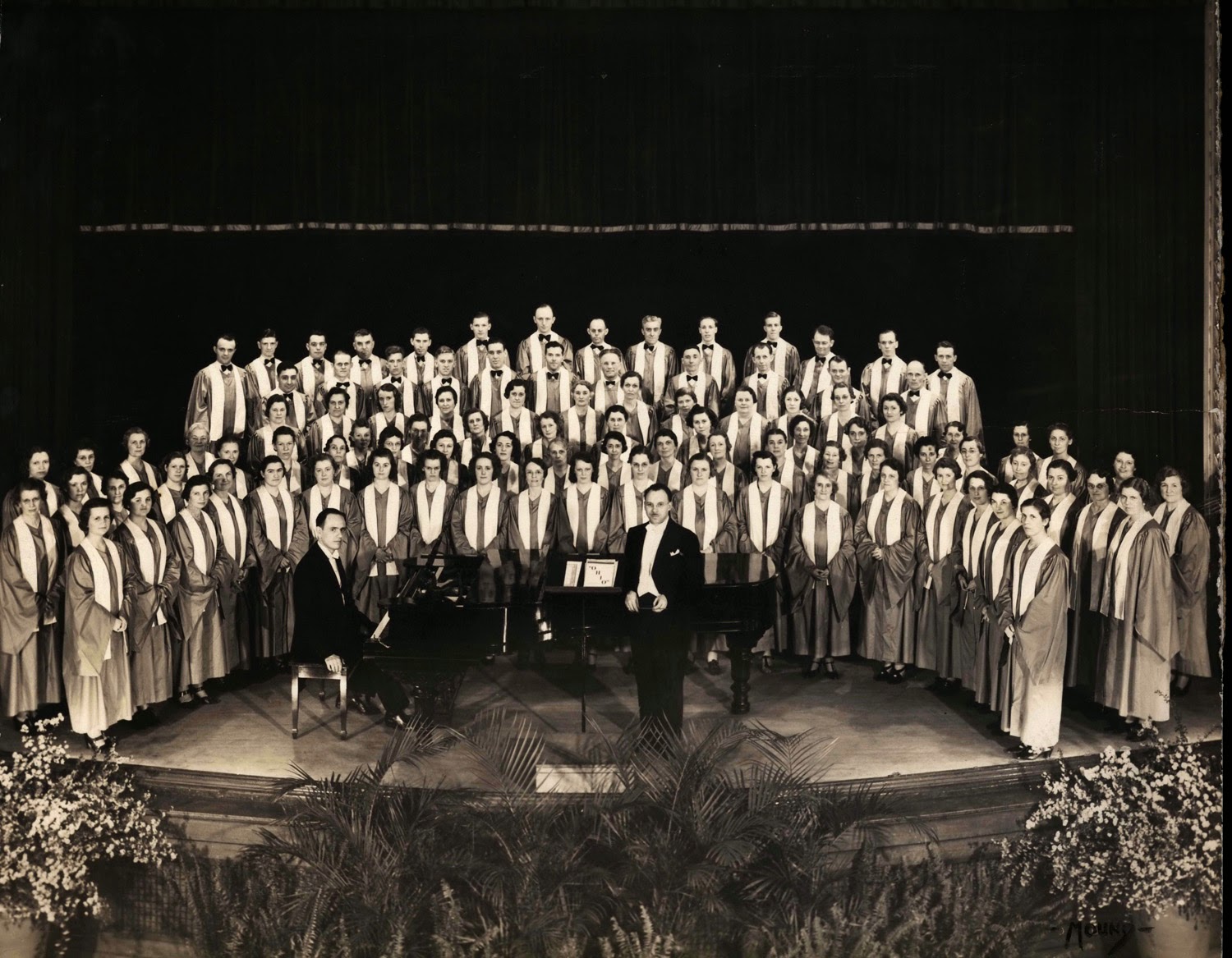 On April 14, 1961, Elmer J. Frank died at Good Samaritan Hospital. He had been hospitalized after an automobile accident six weeks prior to his death, but he died from an underlying illness. Funeral services were held at the Quick’s Funeral Home, where Christian Science Services were held. He was buried in Oakland Cemetery. On November 4, 1962, a Memorial Concert in honor of Elmer J. Frank was held at Adams Junior High School. Jay Perine, Tenor, provided musical performance, with William E. Didelius accompanying, assisted by Beryl Beckwith Dureck. 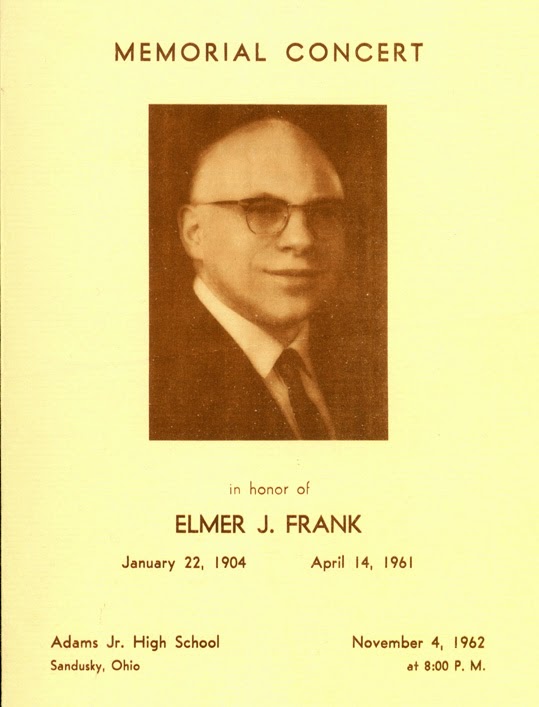 In the historical postcard collection of the Sandusky Library Archives Research Center are several postcards of Sandusky from years gone by. The first three postcards are from the early part of the twentieth century. This “bird’s eye” view of Columbus Avenue was created by the Alexander Manufacturing Company. The view in this postcard scans the eastern side of Columbus Avenue from the Cooke block to Saints Peter and Paul Catholic Church. 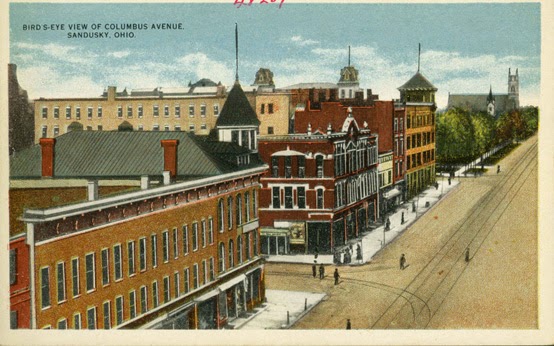 This black and white postcard from the Pesha Postcard Company, owned by Louis James Pesha, also features Columbus Avenue. Several people can be seen along the busy business district of Sandusky’s downtown. 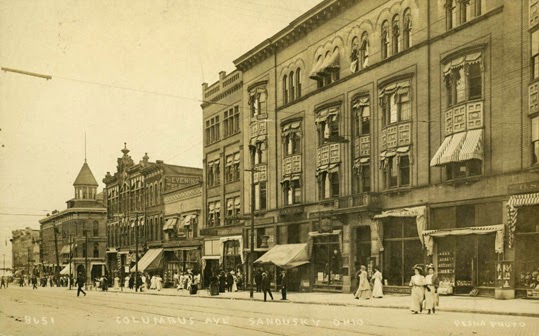 In this postcard, taken on East Market Street, looking east from the Cooke building, Sandusky’s Big Store was a key business in this section of town. Several horse drawn vehicles are visible along Market Street, as well as two youngsters standing near a cart. 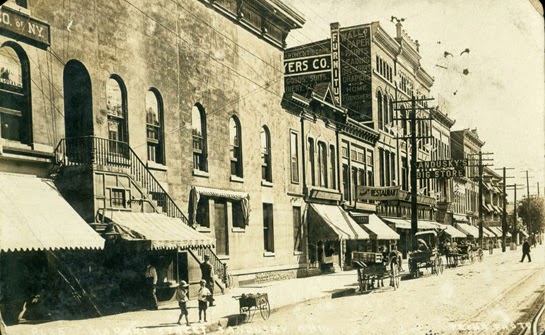 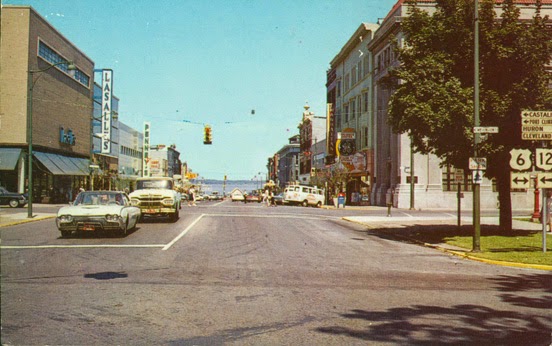 Stores that were well known to many area residents are pictured, including Lasalle’s, J.C. Penney, the Gray Drug Store, and the Manhattan men’s clothing store.
Posted by Sandusky Library Archives Research Center at 10:29 AM 1 comment: 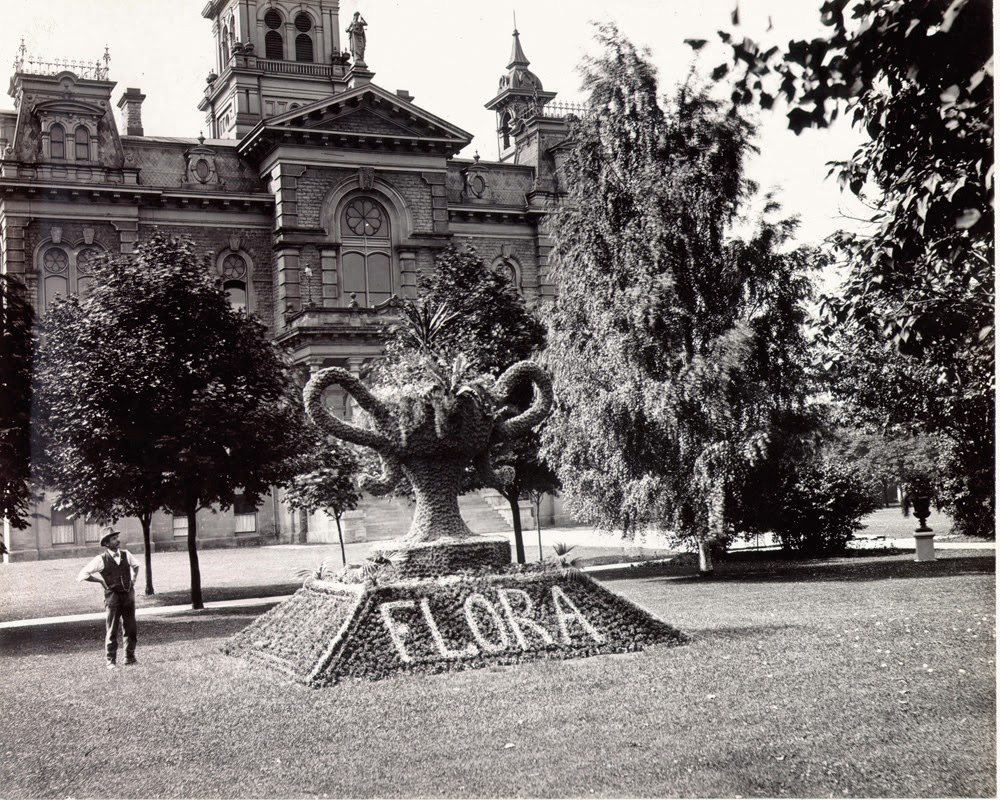 Floral mounds have been a popular feature of the parks in downtown Sandusky for decades. The mound pictured above, which was located near the Erie County Courthouse in 1910, contained an urn and was entitled “Flora.” 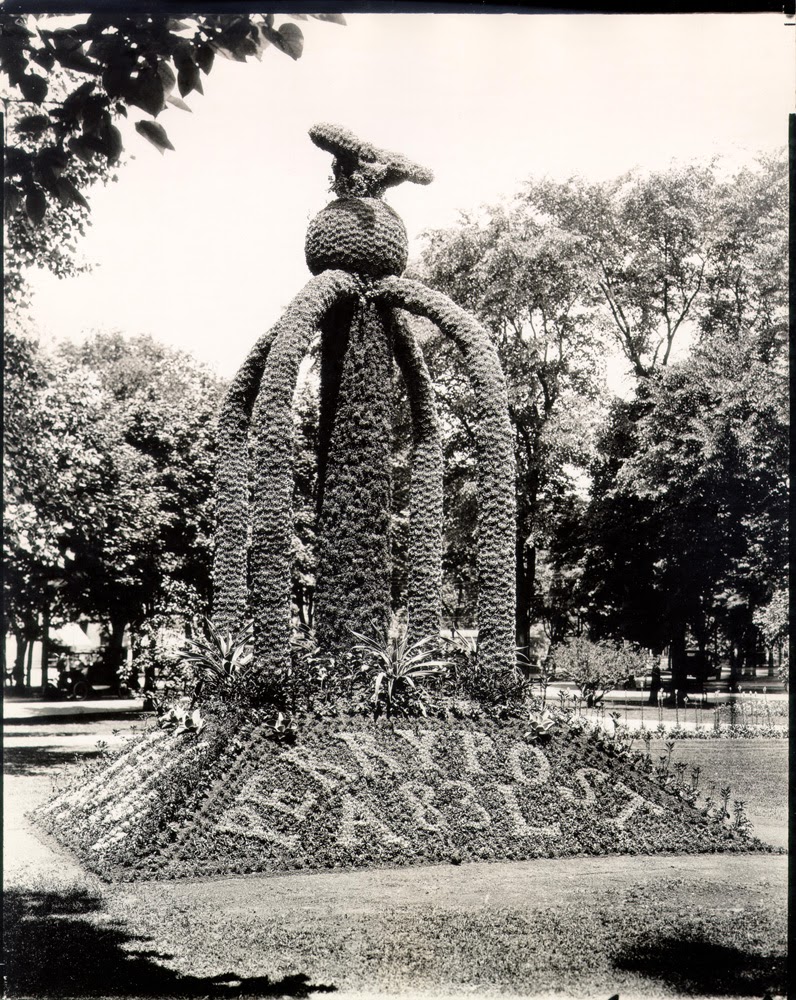 In 1917, another floral mound with a patriotic theme featured an eagle atop the globe, with a floral flag of the United States on the main portion of the mound. 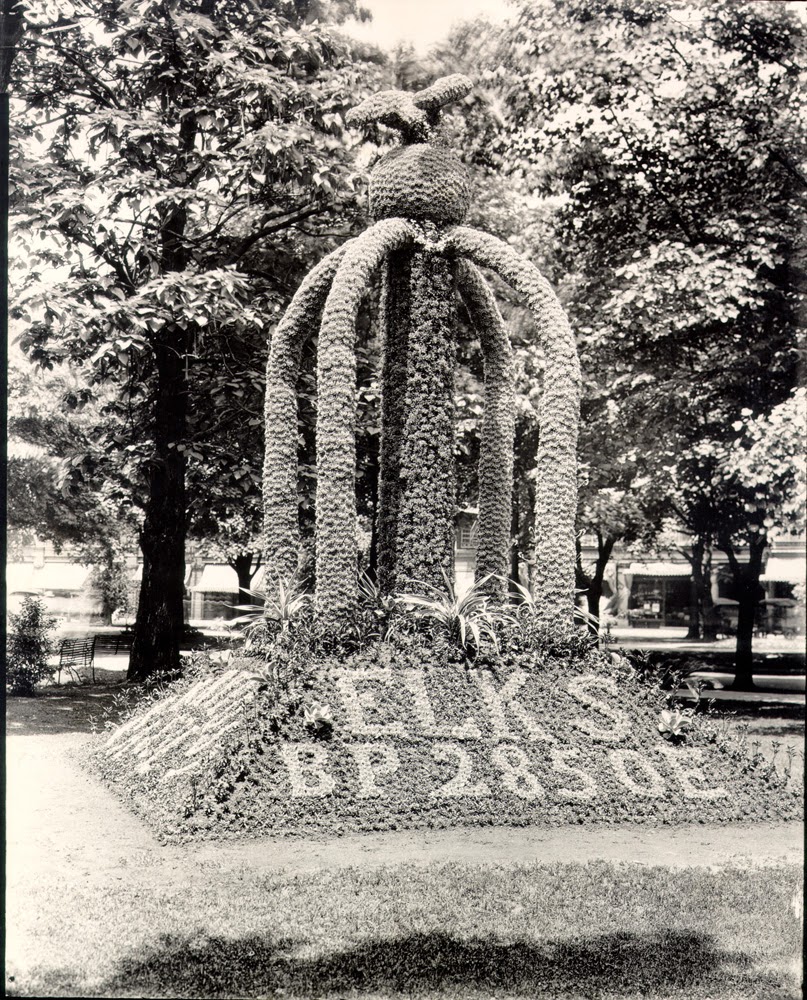 OLEIDA (Ohio Lake Erie Island District Association), which promoted tourism in the 1930s, sponsored the floral mound in this picture. 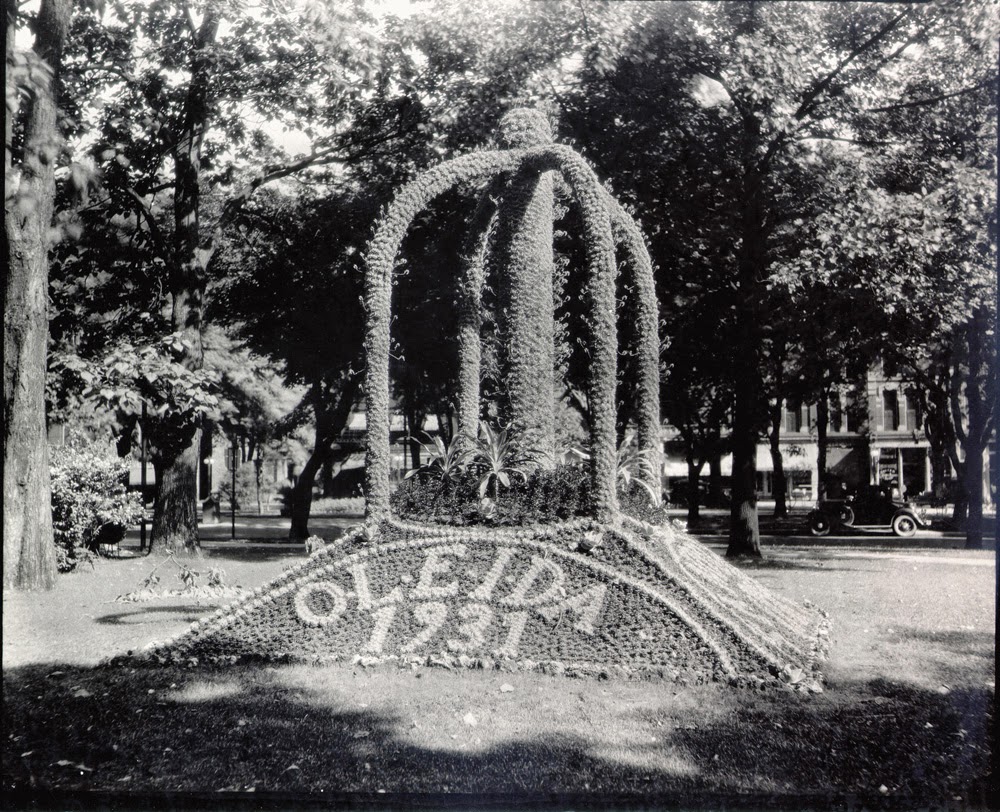 In 1960, a mound honoring the 125th anniversary of the American Crayon Company was located in Washington Park, facing East Washington Street. 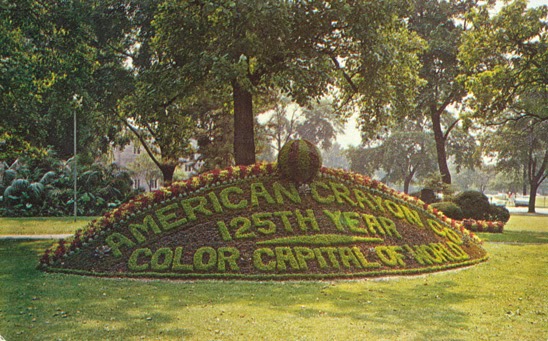 A Look Back at the Hotel Rieger 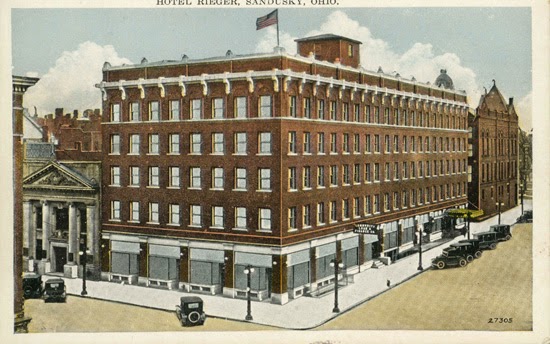 The Hotel Rieger was opened by businessman John Rieger at the southeast corner of Jackson and Market Streets in downtown in 1912. (The former hotel is now undergoing renovations in order to provide affordable housing units for area seniors.) The postcard pictured above shows the fifth floor addition which increased the room count of the hotel. In the postcard, you can see the former Third National Bank building on the east side of the hotel, and to the south of the hotel is the . The image below shows the hotel in 1917, before its expansion. 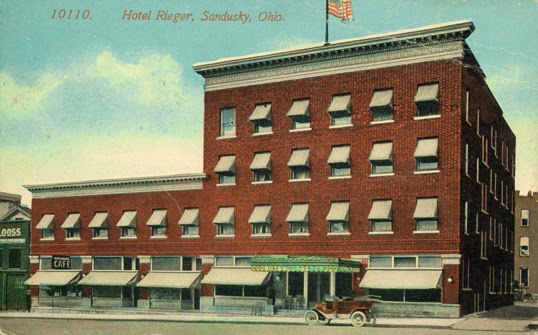 In this postcard below, from the Rich-Holt Company, the Hotel Rieger is pictured along with the Sloane House and the Boy with the Boot fountain in ’s . 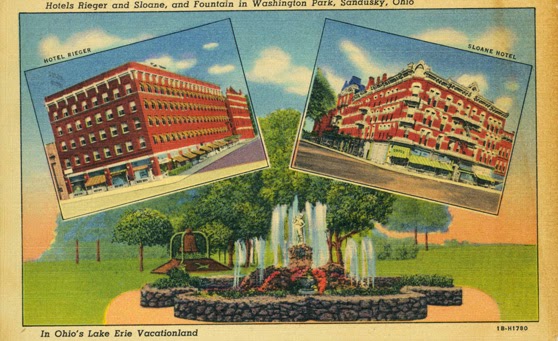 The picture below was taken in the lobby of the Hotel Rieger in 1926, shortly after renovations had been made to the hotel. 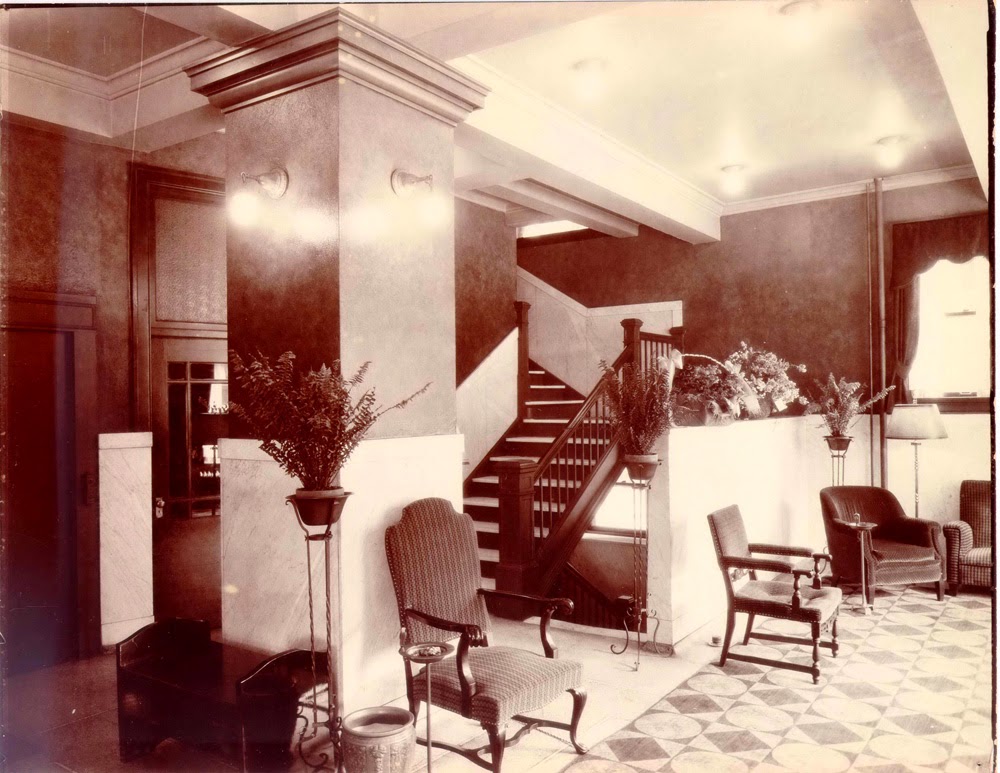 The Buckeye League Band marched past the entrance of the Hotel Rieger in the 1930s. 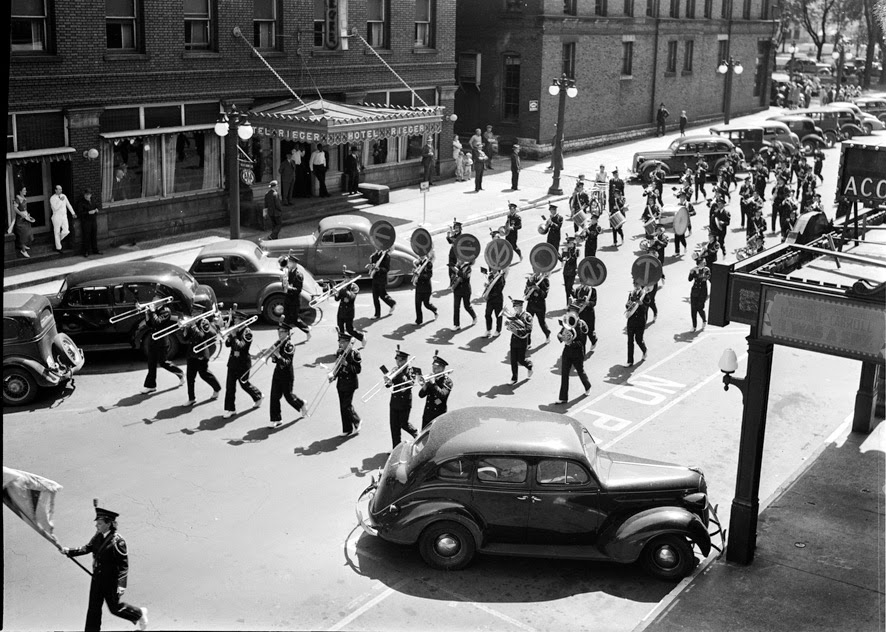 This picture shows an improved entrance at the Hotel Rieger in 1942. 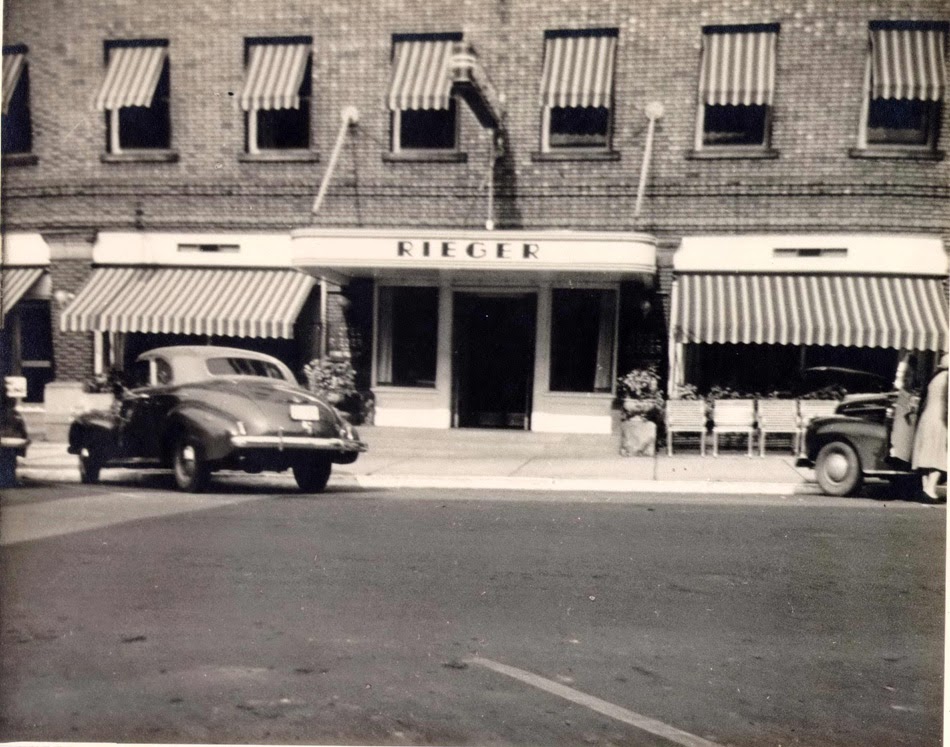 According to an article in the October 17, 2004 issue of the Sandusky Register, Kermit Price bought the Hotel Rieger in 1964, and converted it to the Sandusky Nursing Home. The nursing home closed in 1989, and in 1992, Mr. Price reopened the building as the Sanduskian Hotel.. The building was sold in 1995. Since then the property has had several different owners, and currently the former hotel is under renovation by The Douglas Company. To read more about the history of hotels in , read the StreetWise column, Hotels Rotated through Downtown Sandusky, which appeared in the July 13, 2013 issue of the Sandusky Register.

Posted by Sandusky Library Archives Research Center at 9:58 AM No comments: