Pictures from a Play by the Harlequins in 1948 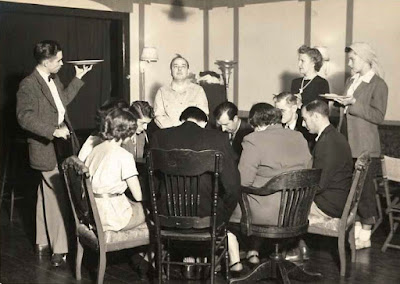 On November 15 and 16, 1948, the local dramatic group the Harlequins presented the play You Can’t Take it With You. The play was a comedy written by George S. Kaufman and Moss Hart. Some of the individuals in the picture above are: Carl Miller, Fran Miller, Eldon Rosswurm, Carroll Post, Lois Meyer, Shirley Carpenter, June Palmer, Ralph Hoffhines, Dorothy Lalond and Jack Mayer. The play was about the fun-loving Sycamore family. In the local production featured June Palmer as Alice Sycamore and Ralph Hoffhines as Tony Kirby. Below is another scene from the play. 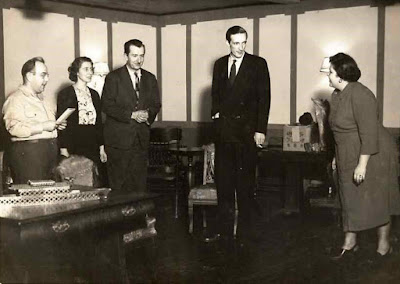 Carroll Post and Orson Kniseley built a model boat for the play. 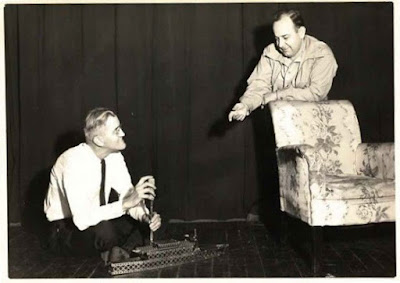 An article in the November 16, 1948 issue of the Sandusky Register Star News reported that “good performances were given by all.” Jack Mayer stole the show as a Russian ballet master, sporting an eagle tattoo and a Russian accent. Someone in the cast created a holiday greeting card with a picture of the set from the play. 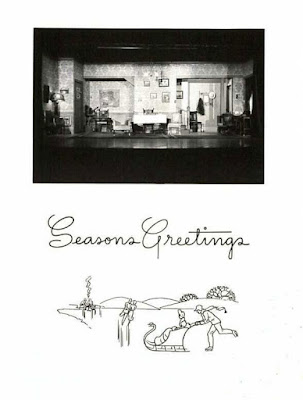 These photographs were donated to the Sandusky Library Archives Research Center from the Kniseley family. Orson Kniseley played Grandpa Vanderhoff in the local play.

Posted by Sandusky Library Archives Research Center at 10:12 AM No comments: 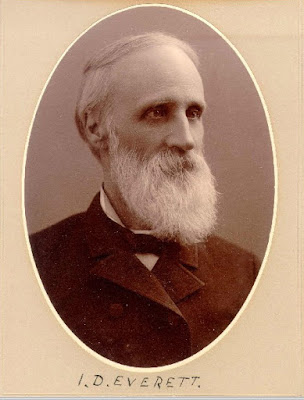 Isaac D. Everett was born in 1830 to Adam and Mary (Wolverton) Everett. In 1862, he married Lavinia Nettleton, who was fondly known as Fanny. He was the brother in law of Leonard B. Johnson, the owner of Johnson’s Island at the time.

In the 1867 Sandusky City Directory, Mr. Everett was in a partnership with Andrew Zerbe and E. and F. Nicolai in a dry goods business on Water Street between Columbus Avenue and Jackson Street.

By 1876, Isaac and his son had their own store on Columbus Avenue. They sold china, glass and queensware, which was a cream-colored earthenware.

An advertisement which appeared in the April 16, 1890 issue of the Sandusky Register announced the opening of a new store, run by Isaac D. Everett and his son Lu. The store sold groceries, fruits, and candies, and was located at 234 Columbus Avenue. 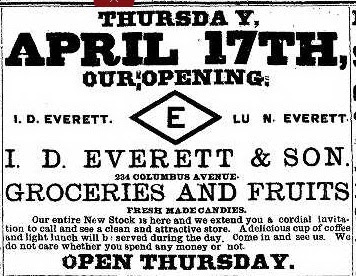 On the day of the grand opening, the Everetts provided coffee and a light lunch to all who stopped in. The ad stated that “We do not care whether you spend any money or not.” In 1892, I.D. Everett and Son moved to 226 Columbus Avenue. By the time of the 1900 U.S. Census, I.D. Everett had retired, and he was living with his daughter Nellie Nason in Columbus, Ohio. Mr. I.D. Everett passed away on October 30, 1907 at the home of his daughter Mrs. Nason, who by then had moved to Chicago, Illinois. Burial was in the family lot at Sandusky’s Oakland Cemetery
Posted by Sandusky Library Archives Research Center at 9:00 AM No comments: 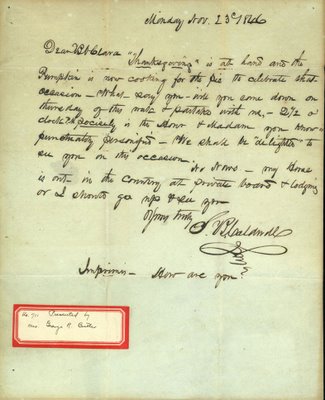 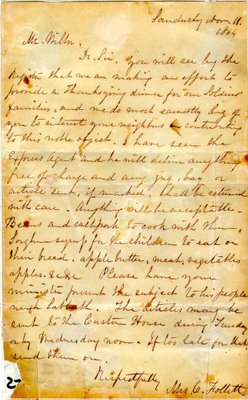 Have a happy Thanksgiving. . .
Posted by Sandusky Library Archives Research Center at 3:41 PM No comments: 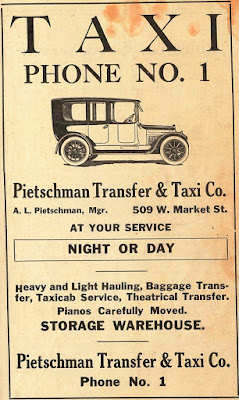 Arthur L. Pietschman ran the Pietschman Transfer & Taxi Company in Sandusky in 1919. He offered taxi service during the night or day, and also moved baggage, theatrical items and pianos. In 1923 he changed the name of his business to Pietschman’s Yellow Cab.

The Cadillac Transfer and Taxi Company was operated by Oscar G. Biehl and Harry J. Andres. 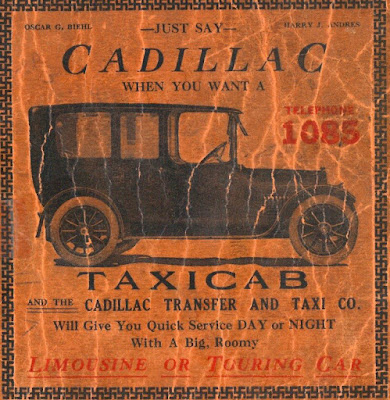 The Cadillac Transfer and Taxi Company offered rides day or night, with a “big, roomy limousine or touring car.”  The advertisement below indicates that the Cadillac Taxi provided speed with safety, and the owners suggested customers call for an appointment for the best service. 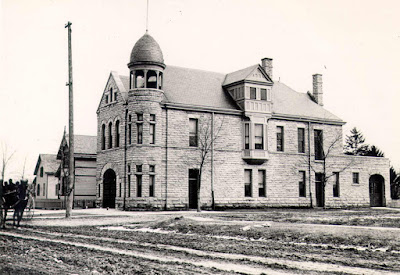 In the late nineteenth and early twentieth centuries, a fire station stood at the northeast corner of Central Avenue and Osborne Streets. Known as Fire Station Number 4, it was constructed of limestone, with a tower and an arched doorway that allowed room for the entry of horse drawn vehicles. Below is a portion of the 1905 Sanborn map which shows the layout of the fire station.

This close up view shows several fire fighters at the Number 4 station. 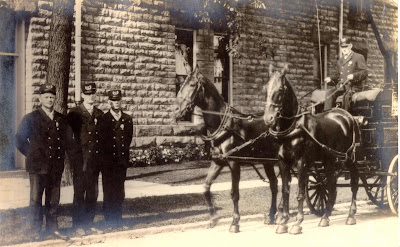 In 1908, Captain Adam E. Hartung died after he was thrown from a horse cart, while on a fire call. The station and fire vehicle were decorated in memory of Captain Hartung prior to the funeral procession. 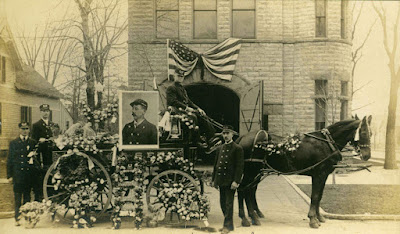 The former fire station at the corner of Central Avenue and Osborne Streets was razed about 1930.
Posted by Sandusky Library Archives Research Center at 9:00 AM 2 comments:

Honoring Those Who Served in World War I

As we commemorate the 100th anniversary of World War I, it is time to take a moment to remember the soldiers from Erie County who gave their lives for their country during the war. 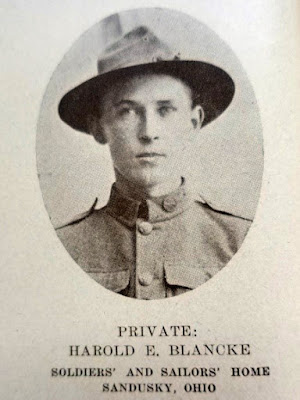 Harold Blancke was born on January 10th, 1900 in Perkins Township. He enlisted long before the United States entered the war. He enlisted in the 6th Ohio, a National Guard unit, on July 7th, 1915. Once the war started the 6th Ohio was stationed around the state guarding railroad bridges and railroad yards. Harold was stationed outside of Port Clinton guarding the New York Central Bridge. On the night of April 15th, when Harold was relieving another soldier of guard duty, Harold was struck by a train and killed instantly. He was buried in Oakland Cemetery Sandusky, Ohio on April 17th. Harold Blancke was the first soldier from Erie County to die during World War I. 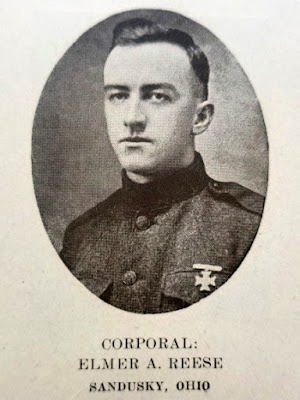 Elmer Reese was born in Niles, Ohio on August 12th, 1896. He eventually moved to Sandusky to work for the Baltimore and Ohio Railroad. He enlisted in the Marines on May 19th, 1917 and was assigned to the 6th Regiment, Company A. He was promoted to Corporal on November 30th, 1917. He was shipped to Europe with his units on February 20th, 1918. During the Battle of Belleau Wood Elmer was killed in action on June 8th, 1918. He became the first Erie County soldier killed in combat during the war. His family was notified of the death on September 20th, 1918. Corporal Reese was originally buried in France but in 1921 his body was returned to the United States to buried. His body arrived in Sandusky on September 12th, 1921 with funeral services and burial in Oakland Cemetery Sandusky, Ohio the next day. 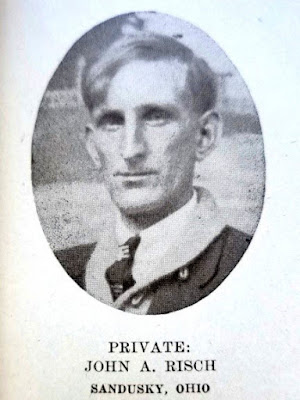 John Risch was born in Sandusky, Ohio on October 31st, 1891.  John enlisted in the Coastal Artillery on November 21st, 1913 long before the war even started. He was stationed at several forts on the west coast, but mainly in Washington state. On June 11th, 1918 he was discharged with a 100% disability due to an illness. After discharged he returned to Sandusky. In January of 1919 he was admitted to the Sandusky Soldiers' Home and was discharged on March 1919. John was the first soldier to be admitted to the Sandusky Soldiers' Home who served in World War I. He died May 12th, 1919 and was buried in Oakland Cemetery Sandusky, Ohio. 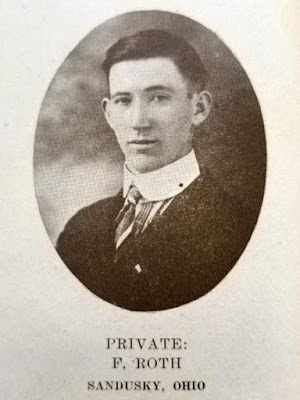 Edward Roth was born in Sandusky, Ohio on May 24th, 1893. He enlisted in the regular army on October 5th, 1917. He was sent to Camp Sheridan in Alabama and stayed there until his discharge on June 19th, 1918. Edward was discharged with 100% disability due to a chronic illness. After discharge Edward returned to Sandusky and eventually died in Good Samaritan Hospital on June 24th, 1919. This marks the last soldier to die from Erie County whose cause of death was linked to his time in the service during the war. Edward’s funeral was June 27th, 1919 and was buried in Oakland Cemetery Sandusky, Ohio.

Posted by Sandusky Library Archives Research Center at 11:00 AM No comments: