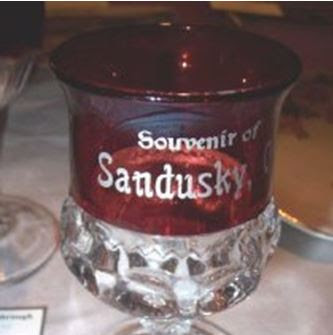 Ruby souvenir glass was popular in the United States in the nineteenth and early twentieth centuries. Tourists could purchase items made of ruby colored glass while at the fair or train station, and could take them home as a memento of their travels. Several items made from ruby glass are in the collections of the Follett House Museum.

The ruby glass pitcher below was purchased at Cedar Point. 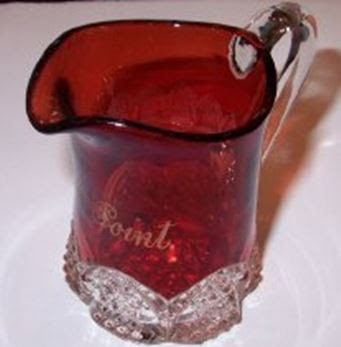 The tumbler below is etched with the words “Cedar Point” on one side, and “Mother” on the opposite side. It dates back to 1906. 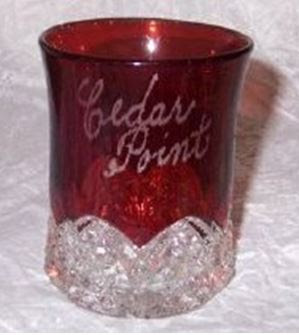 This personalized mug was originally purchased for someone named Ethel in 1907. 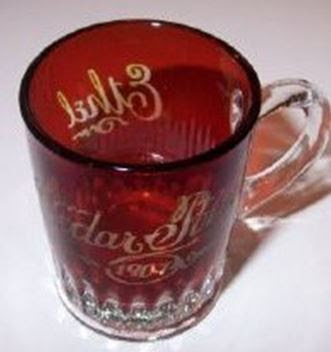 Visit the Follett House Museum to view a variety of historical souvenirs and items from Sandusky’s storied past. To read more about the history of ruby glass, see this article from the Antique Trader.
Posted by Sandusky Library Archives Research Center at 9:00 AM No comments: 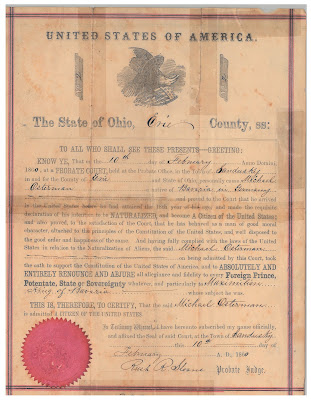 Michael Osterman became a naturalized citizen of the United States on February 10, 1860. He was born in Bavaria, in what is now Germany. Rush R. Sloane, Erie County Probate Judge, signed the certificate.

An article in the October 12, 1905 issue of the Sandusky Register reported that Michael Osterman had resided in Sandusky for fifty years, prior to his death on October 10, 1905. He worked on the Mad River and Lake Erie Railroad, and later was a steam engineer for the Sandusky fire department. He was the organizer first president of the local Prussian Society.

For many years he operated a saloon on Water Street. The 1888 Sandusky City Directory listed Michael Osterman as the proprietor of the Engineers’ and Hunters’ Saloon and Restaurant at 808 and 810 Water Street 300 block W. Water today). In the 1900 Sandusky City Directory, Mr. Osterman’s saloon and residence were both located at 435 Market Street (at the northeast corner of Market and Hancock Streets).

In the January 29, 1923 Sandusky Star Journal, an article tells of the discovery of an old railway passenger coach from the Mad River and Lake Erie Railroad being found in the back of property on West Water Street that had once been owned by Mr. Osterman. The old railroad car had first been used as part of a kitchen, and later was moved to the back of the property where it was used as part of a shed. Alex Osterman, Michael’s son, was asked to tear down the structure in 1923 because it was considered a fire hazard.
Posted by Sandusky Library Archives Research Center at 9:00 AM No comments: 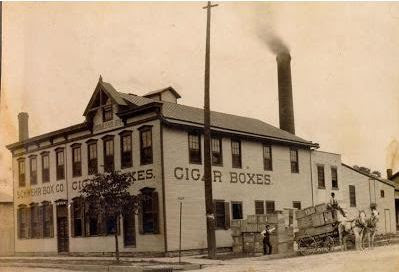 In the late nineteenth and early twentieth centuries cigar making in Sandusky was a major industry. Locally produced cigar boxes were made of cedar, held together with nails. Karl Kurtz wrote in the Sandusky Register of January 14, 1978 that in the early years, the Schwehr Box Company made 350,000 cigar boxes and 5000 fish boxes a year. The factory employed about 25 people, and had a printing press to make their own labels for the boxes. By 1900, C. B. Lockwood was the proprietor of the business. In the 1912 Sandusky city directory, the company’s name had been changed to the Standard Box Company, and around 1920, William Sumser became the proprietor. In 1930, the Standard Box and Screen Company was manufacturing window and door screens as well as cigar boxes. An advertisement in the May 17, 1941 issue of the Sandusky Star Journal recommended the bronze screens made at the Standard Box Company for their endurance. 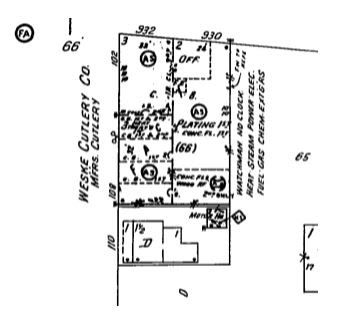 In the 1960s and 1970s, Bob’s Furniture had a warehouse at 932 West Water Street, where the box factory once stood. Now, the southeast corner of Water and McDonough Streets is an empty lot, but that location was once an important spot for local businesses.
Posted by Sandusky Library Archives Research Center at 9:00 AM 1 comment:

At Sandusky High School, Miss Lehman taught French classes, and she also was head of the foreign language department. In 1938, she was the faculty sponsor for the Girls Photography Club, and later served as a guidance counselor. In a 1926 Sandusky Register column, “Teen Talk,” Miss Lehman gave advice to students who intended to go to college. She stated that younger students should research their prospective fields of study, while older students should concentrate on the reality of financing their education.

On July 19, 1985, Miss Ellen Lehman passed away after a lengthy illness. She had no known survivors. An obituary appeared in the July 21, 1985 issue of the Sandusky Register, and listed many of Miss Lehman’s accomplishments. She had been a Jennings Scholar in 1967-1968, and won a Register Community Service Award in 1970. She was a member of Christ Episcopal Church, member and past president of the College Women’s Club, a member of the American Association of University Women, Zonta International, the Art Study Club, the Erie County Board of Mental Health, and the Huron Library Board. She was also a charter member of the Sandusky Cultural Center board and life member of the Ohio Association of College Admission Advisers.

Here is Ellen Lehman (third from right) with a group of people at a French Club picnic: 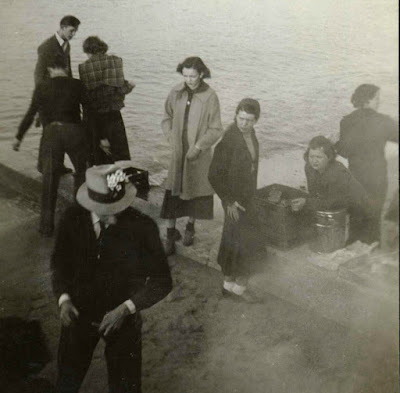 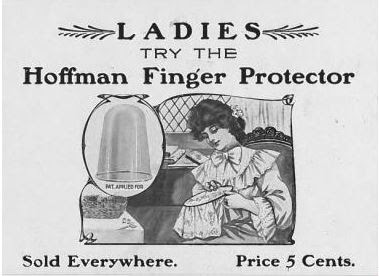 Around 1910 the Hoffman Manufacturing Company in Sandusky, Ohio sold a product called the Hoffman Finger Protector. In the 1910 Sandusky City Directory, Charles Hoffman was listed as the manager of the company, which was located at the northwest corner of Scott and Hancock Streets. The company made elevating trucks and clothesline reels. The Hoffman Coal and Milling Company was also at that location. A previous blog post discussed the Daniel Hoffman family, and mentions the patent issued to Charles Hoffman for an elevating truck.

An article in the May 9, 1917 issue of the Sandusky Star Journal reported that attorney R.B. Fisher had purchased the patents and equipment from the Hoffman Manufacturing Company, and he was going to continue to make the handy combination elevating trucks. Though we do not have a Hoffman Finger Protector in our collections, you can see the Hoffman Handy Combination Elevating Truck in the Industry Room of the Follett House Museum. 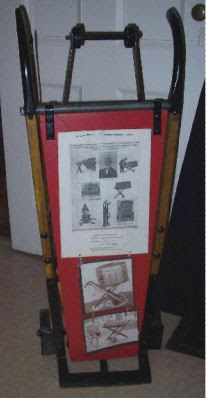 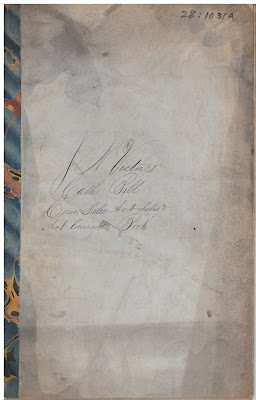 J.N. Victor’s cash book was donated to the Sandusky Library 1928. Dates recorded in the book span from 1852 through 1854. While the specific business with which Mr. Victor was associated is not noted on the item, merchandise that was sold includes: wool, pig iron, nails and a variety of foods. Some entries record payment for freight charges only. As he was only 17 in 1852, he may have been a clerk for a railroad or other shipping company at this time.

The page below, from May 5 through December 20, 1852, is a record of payment from architect Sheldon Smith, who purchased molasses and sugar. 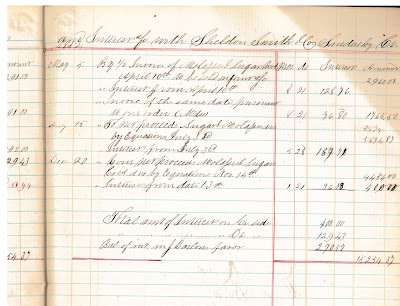 Sales of barley and wheat were recorded from July through December of 1854. 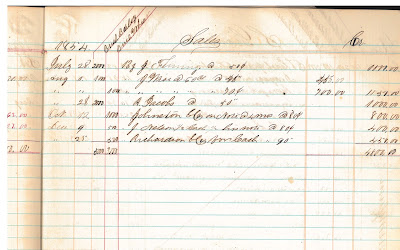 By  1861, J.N. Victor was employed at the general freight office of the Sandusky, Dayton and Cincinnati Rail Road Company in Sandusky, Ohio. He went on to become the superintendent of the California Southern Railroad Company. The town of Victorville, California was named in his honor.

Jacob Nash Victor was the son of Henry Clay Victor and the former Gertrude Nash; his brother was author and editor Orville James Victor.
Posted by Sandusky Library Archives Research Center at 9:00 AM No comments:

Do you remember when you could grab a free book of matches on your way out of a restaurant or store? 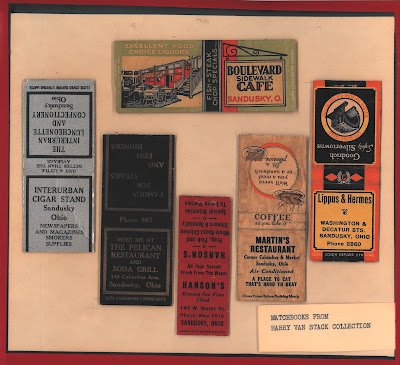 Journalist and author Harry Van Stack donated several matchbook covers from Sandusky businesses to the Sandusky Library. The matchbooks were from five restaurants and a service station that were in operation primarily in the 1930s and 1940s in downtown Sandusky. The Boulevard Cafe can be seen in the picture below next to the Ohio Theatre on West Market Street in 1937. 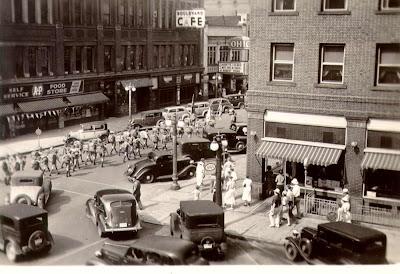 In the 1931 photograph of downtown Sandusky, the Pelican Restaurant is on the west side of Columbus Avenue, just north of Rosino’s, and Martin’s is at the northeast corner of Columbus Avenue and Market Street. 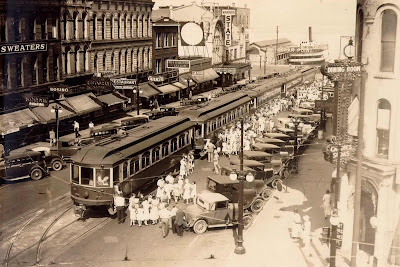 A Portrait of Harriet Merry in the Follett House Museum 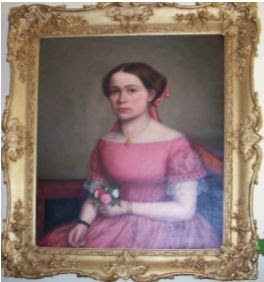 Have you ever been to the Follett House Museum and noticed this painting on a wall? Here is a little about the young woman in the portrait.

Miss Harriet Emily Merry was born on September 6, 1841 to Henry and Caroline (Sprague) Merry. Henry Merry was a master carpenter, who was active in the building and business interests of the city of Sandusky. It is believed that Caroline Sprague was the first white child to have been born in Florence Township. According to an article in volume 9 of the Firelands Pioneer, both Henry and Caroline Merry participated in the Underground Railroad, and their home at 330 East Adams Street was considered a “safe house.”

Harriet Emily Merry married Alonzo William Nason in the Merry family residence in 1863. Mrs. Nason died on January 25, 1895. In 1965, William Lawrence Nason, Harriet’s grandson, donated the lovely oil painting of Harriet Merry Nason to the historical museum of the Sandusky Library. The painting now is on display at the Follett House Museum. To read more about the Merry home in Sandusky, read the book, At Home in Early Sandusky, by Helen Hansen.
Posted by Sandusky Library Archives Research Center at 9:00 AM No comments: 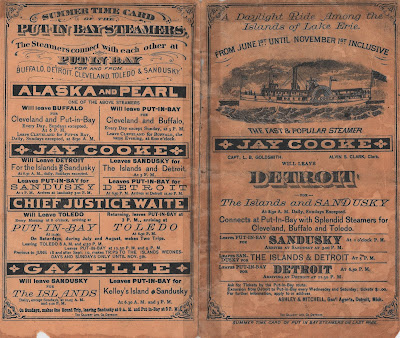 Around 1878 this Summer Time Card of the Put in Bay Steamers was printed by the Calvert Lithograph Company of Detroit. Steamers brought passengers to Put-in-Bay from Sandusky, Cleveland, Toledo and Detroit.

The side-wheel steamers Alaska and Pearl were new in the summer of 1878. They had a daily line, with the exception of Sundays, that traveled between Put-in-Bay, Cleveland and Buffalo, with connections at Put-in-Bay to and from Sandusky, Detroit, and Toledo. 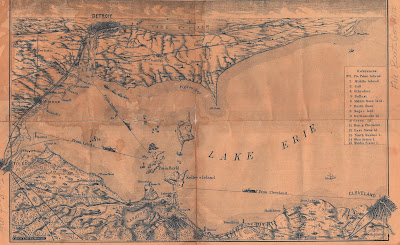 Advertisements for the Put-in-Bay House, the Beebe House, and the Golden Eagle Wine Cellars appeared on the opposite side of the Steamer Time Card. 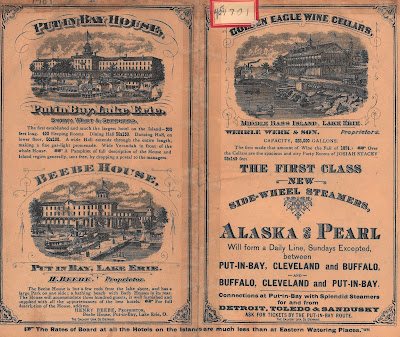 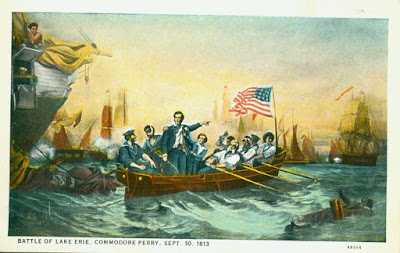 On the weekend of July 4, 1852, five companies of the Volunteer Militia of Ohio celebrated the anniversary of American independence by holding a three days’ encampment at Put-in-Bay. A preliminary meeting was held “for the purpose of effecting a monumental organization…in reference to the erection of a monument on Gibraltar Rock, Put-in-Bay, commemorative of Perry’s brilliant victory on Lake Erie, and in honor of the dead who fell in that memorable engagement.”

The library has an invitation presented to Horace Newton Bill, a Brigadier General in the Ohio Militia, to the ceremonies of the laying of the cornerstone of the monument to commemorate the naval victory at the Battle of Lake Erie. 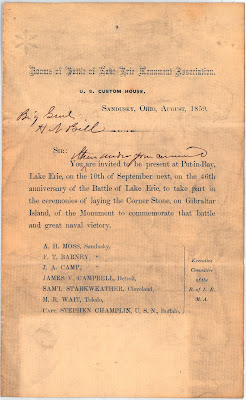 While the cornerstone was laid in 1859, the monument was not completed as planned. After purchasing Gibraltar Island in 1864, Jay Cooke built a small monument to Oliver Hazard Perry using the existing base. A photograph of the monument also appears at the Remarkable Ohio website. 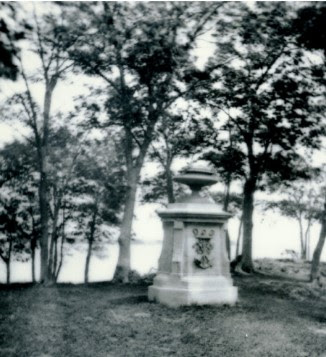 After several failed attempts to construct a larger monument to honor Commodore Perry, construction of the Perry Memorial at Put-in-Bay was begun in 1912. Now known as the Perry’s Victory and International Peace Memorial, the monument opened to the public on June 13, 1915. To learn more about the history of Put in Bay and the Battle of Lake Erie, you could find several books in the Sandusky Library's collections.
Posted by Sandusky Library Archives Research Center at 9:00 AM No comments: