Iron Skillet Made in Sandusky 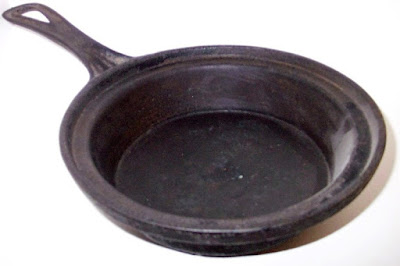 This iron skillet, now housed at the Follett House Museum, was created at the Co-Operative Foundry in Sandusky, Ohio. The top of the handle of the skillet featured an opening for ease of storage in one’s home kitchen. 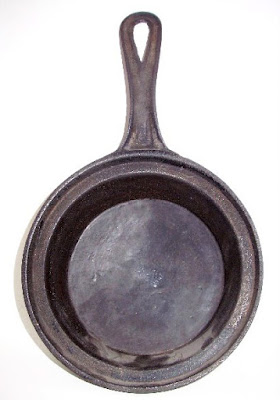 The Co-Operative Foundry was located at the southwest corner of Water and Shelby Streets in the 1890s and early 1900s. In 1900, the president of the company was John J. Molter, who once served as Sandusky’s Postmaster, and later as its Mayor. 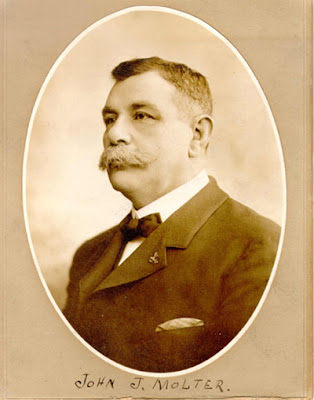 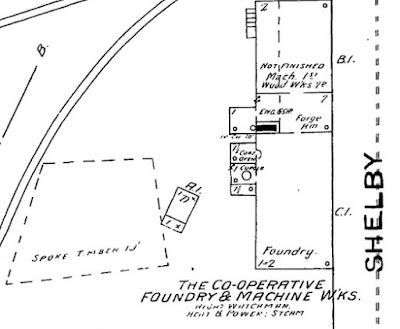 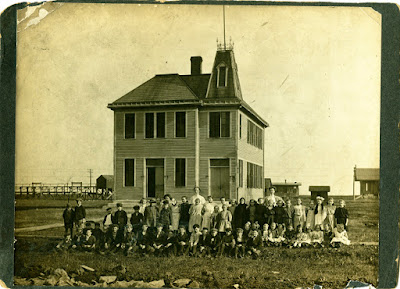 Mrs. Leona Zeller Fitz donated these pictures of students and teachers from Venice School to the Sandusky Library Archives Research Center. Pictured above are over fifty elementary students who attended Venice School in the first quarter of the twentieth century. No students have been identified, but Mrs. Baum was the teacher on the left and Mrs. Kelley was the teacher standing on the right.

In the picture below, Leona Zeller is marked with an x. Mr. D.W. Carlisle, a teacher at Venice School in 1915, is the tall man in the back row. Later, he became principal of Venice School. Many of the male students are wearing short pants, or "knickers," and most of the older boys have on hats. 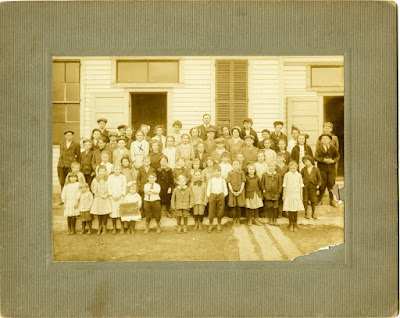 Venice Heights Elementary School is now a part of the Sandusky City Schools system, but for many years Venice School was one of the schools in Margaretta Township. (The original Venice School was founded in 1818 on Venice Road near Cold Creek.) This map from the 1896 Erie County Atlas shows the location of the school at that time, just south of the railroad tracks along Sandusky Bay. 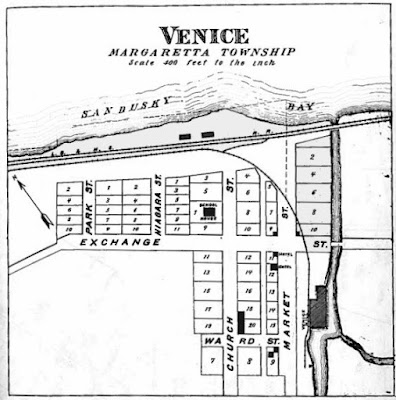 An article in the April 4, 1923 issue of the Sandusky Register reported that “a handsome new school building” in Venice was to be dedicated on April 5. At that time, Mr. D.W. Carlisle was the principal of Venice School, and he also taught grades 7 and 8. All the other teachers at Venice taught two grades as well. That new school building, no longer standing, was on Bardshar Road, a short distance away from Trinity Lutheran Church. In the 1950s and 1960s, during some years an entire grade held class in the basement of  Trinity Lutheran Church, because of over-crowding at Venice Elementary School.
Posted by Sandusky Library Archives Research Center at 9:00 AM No comments: 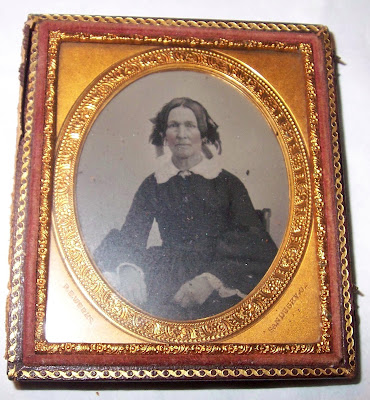 This daguerreotype of Mrs. Sophia Sprague was created by R.E. Weeks in his studio in 1857. Sophia Patrick was born in Madison County, New York in 1798. She married Nehemiah Sprague in the mid-1820s in the state of , and they had a large family that included seven children. Mr. Sprague died in 1848, leaving Sophia to support the children by herself. By 1860 she was residing in , with several of her children. An article which appeared in volume four of the Firelands Pioneer describes her experience as a single mother.

Seven bodies to clothe and feed, seven minds to train and educate, was no small task for a woman, but she was equal to it and performed her work well. One by one they arrived at man and womanhood and were married, but until that time she provided them all a home and her work in that direction was not completed until there were none to look after. From that time on she found a comfortable home with those she had brought through trials and hardships from childhood to man and womanhood. Two of her daughters, Elizabeth and Sophia, married, one in 1853 and one in 1856, and moved to Ohio and to that state she followed them, with the rest of her children, in 1856; since that time she has resided in Sandusky. As long as any of her children remained unmarried, she kept her own home for them; when they were all gone and her duty done to them, she took up her abode with the children to whom she had been so faithful.

At the age of 83, Sophia Sprague displayed an embroidered lace handkerchief at the Erie County Fair. She also displayed a quilt at the fair which she had done in the style of the double Irish chain. The quilt was awarded as a premium. You can read much more about the Erie County Fair of 1880 in September 24, 1880 issue of the Sandusky Register, on microfilm at the Sandusky Library Archives Research Center.

Mrs. Sophia Sprague died on November 19, 1886, at the age of 89. She was survived by four daughters and one son. Mrs. Sprague was buried at ’s . Her brother, Dr. Spicer Patrick, was the first speaker of the house for the new state of . 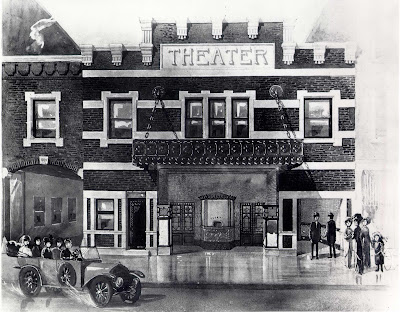 Opening in 1907 on West Market Street, the Star Theatre was in business on the 100 block of Columbus Avenue from 1914 to 1930. When the new Star Theatre building opened in May of 1914, an article in the Sandusky Register stated that the theater was “Built by Sanduskians for Sandusky.” A stone house built by Eleutheros Cooke had once stood where the new theater was built. Many local businesses provided supplies and materials for the new building. 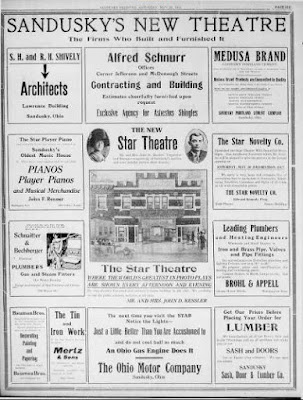 The September 3, 1922 issue of the Sandusky Register carried an advertisement which promoted the Fifth Annual Paramount Week at the Star Theatre. It stated that Paramount Pictures were “Celebrating Better Pictures at the all the Better Theatres.” The Paramount movies shown at the theatre from September 3 to September 9, 1922 were popular silent films, including “Call of the North,” “Morals,” “Sleepwalker,” and “Rent Free.” The stars in the Paramount Pictures were all part of the Famous Players-Lasky Corporation.

On May 16, 1925, Bob Custer starred in “Flashing Spurs,” a western in which a Texas Ranger goes after a young woman thought to be involved with a gang of bank robbers. 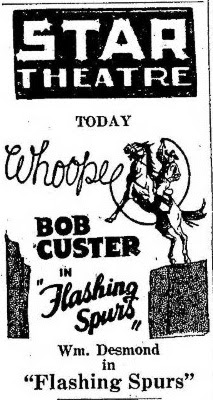 The Star Theatre remained popular during the silent movie era, but eventually talking motion pictures made silent movies fall out of favor with the public, and the theatre ceased operations. Several different businesses have been located at what is now known as 140 Columbus Avenue, including cab companies and restaurants. Mr. Smith’s Coffee House is now located at the site. Visit the Sandusky Library to find a variety of books about the history of motion pictures, or to borrow classic films on DVD.
Posted by Sandusky Library Archives Research Center at 9:48 AM No comments:

A Snapshot of East Market Street from 1955

Helen Hansen, former curator of the Follett House Museum, took this picture of a portion of the Cooke Block and the north side of East Market Street on September 3, 1955. At this time Donald Smith ran the Smith Drug Store, where Holzaepfel’s would later operate a sporting goods store. When you take a closer look, you can see a sign in the shape of an LP record over the door of Meggitt’s Music Shop. 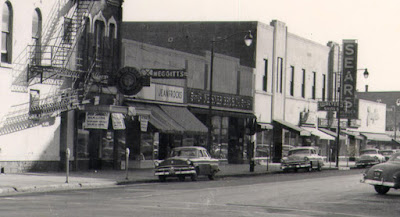 Other stores familiar to the “Baby Boom” generation of local residents include Jean Frocks, the Neisner Five and Dime, and the Sears store, where Santa would visit with youngsters each holiday season. Joseph’s Department store was to the east of the large Sears store. In the next block of East Market, was the former Whitehouse restaurant, later Markley’s, and Gossoff’s Carpet and Linoleum store. 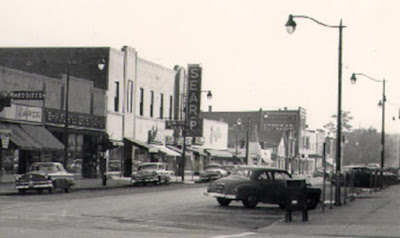 Check out the library's online Archives to view more historical images from Sandusky and Erie County.
Posted by Sandusky Library Archives Research Center at 11:14 AM No comments: 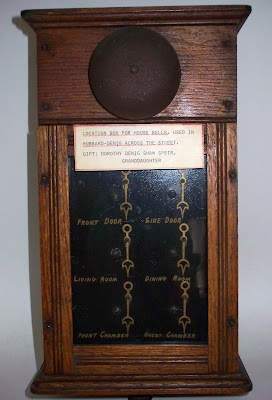 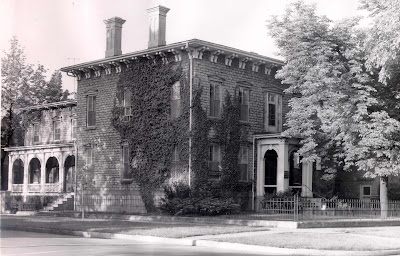 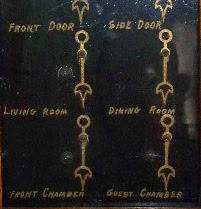 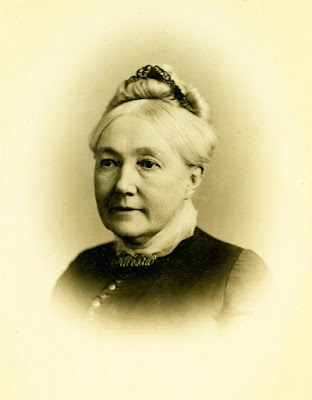 "The Grandest Pic-Nic of the Nineteenth Century" 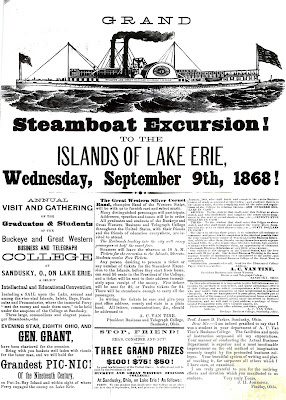 The Buckeye and Great Western Business and Telegraph College was established in 1866. At first all students were male, though in later years many female students enrolled.  Some of the courses offered at the College were accounts training, telegraphing, and shorthand.

On the day of the Excursion, everyone who attended found it to be a “pleasant affair” according the Sandusky Register of September 10, 1868. Threatening weather kept hundreds of people at home, who would have gone on the trip had there been fair weather on September 9.

Below is a picture of three steamboats close to Put in Bay in 1868: 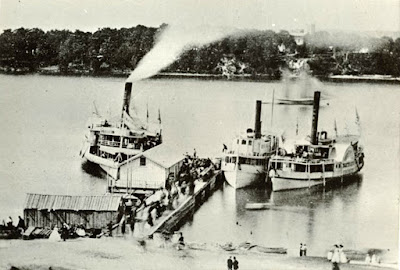 The Evening Star is on the left. The center boat is the Lake Breeze. To the right is the Eighth Ohio.  In the far distance, you can see a portion of Jay Cooke’s home on Gibraltar Island. 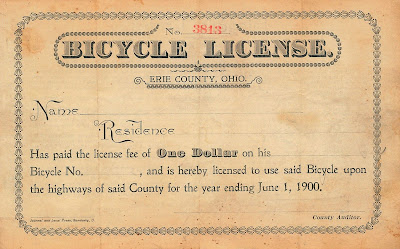 In the late 1800s and early 1900s, bicycle licenses were issued in Ohio, to provide funds for the construction and repair of bicycle paths. This blank bicycle license was issued by the Erie County Auditor’s Office for the fee of one dollar (about $30 in today's money). In the late nineteenth century, bicycles became popular for both transportation and recreational purposes.

Below is a picture of a young man named Lloyd Gaa, standing with a penny-farthing bicycle at the Lloyd Studio in Sandusky in 1882. 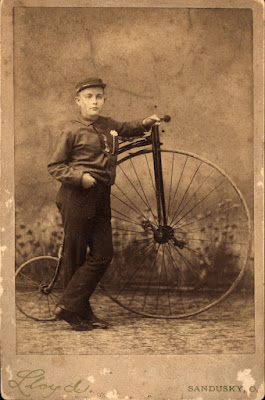 We are unsure if the bicycle in front of the Beilstein Laundry belonged to an employee or a customer. 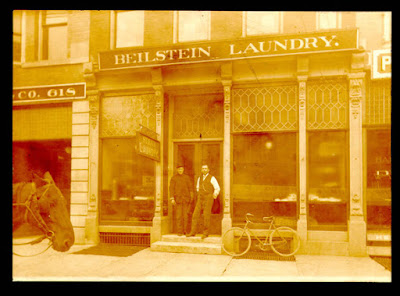 These young men are getting ready for a local bicycle race in 1919: 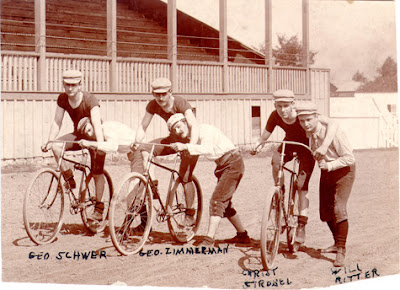 Here is a copy of the Bicycle Laws that were passed by the General Assembly of the State of Ohio on April 21, 1898: 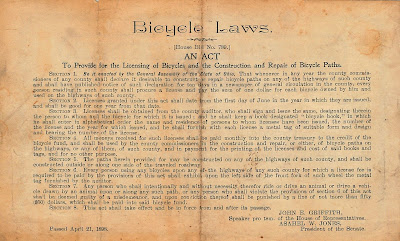 And if you want to know about today's bicycling rules, follow the link for a column from the Ohio Bar Association that discusses current guidelines about the Law of Riding a Bicycle in Ohio.
Posted by Sandusky Library Archives Research Center at 9:00 AM No comments: 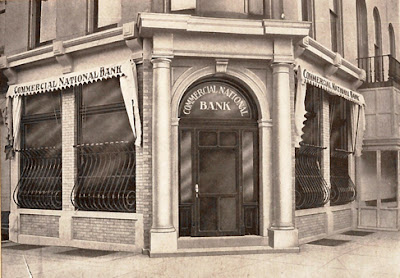 In the early twentieth century, the Commercial Banking and Trust Company was at the northeast corner of Columbus Avenue and East Market Street. In 1922, as a promotion, the bank offered customers a booklet of canning labels to use in marking hand canned fruits, vegetables and preserves. 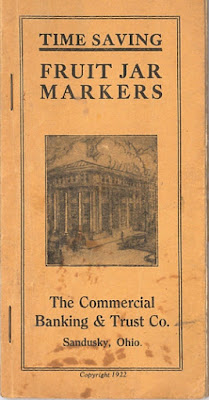 The booklet described the “Emergency Shelf,”  which homemakers could keep stocked with home canned goods, to be used in an emergency or if the homemaker found herself quite busy on any given day. 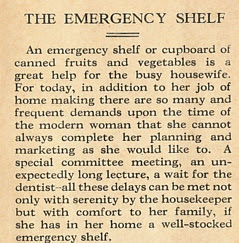 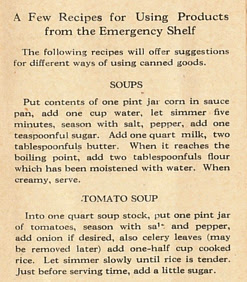 There are several gummed labels still in excellent condition in the booklet, now in the collections of the Sandusky Library Archives Research Center.

In 1923, the Commercial Banking and Trust Company opened a new building at the northeast corner of Washington Row and Columbus Avenue. Unfortunately, the bank failed during the Great Depression. 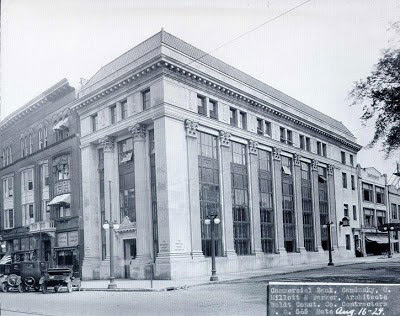