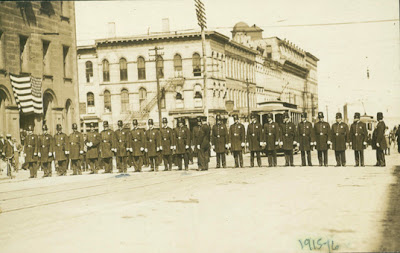 
This portrait image of Samuel Beach allows a clearer view of the police uniform of that era. 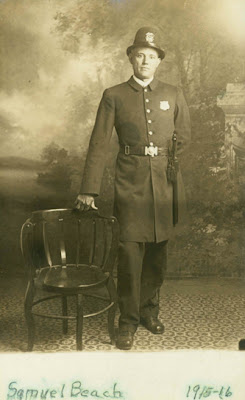 Sandusky policemen are pictured below in an unidentified parade. The streetcar rails are clearly visible, and a marching band is behind the group of policemen. A little boy wearing a hat and knickers appears to be very interested in the parade. 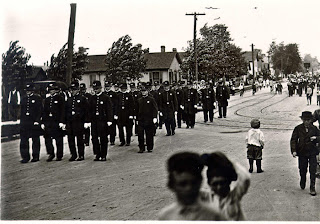 Posted by Sandusky Library Archives Research Center at 11:45 AM No comments:

An article in the September 26, 1900 issue of the Sandusky Daily Star reported that Professor J. D. Luse had moved to Sandusky to become supervisor of music in the Sandusky schools. Between 1890 and 1909, Jesse D. Luse authored several music books. The series of books in his “Wreath Music Course” were used in the curriculum of public schools, as well as in one room schools throughout the Midwest.

The Laurel Wreath of Song was published by J. D. Luse in 1902, when he resided in Sandusky. The book contained popular songs, patriotic songs, selections to sing in harmony, as well as hymns. 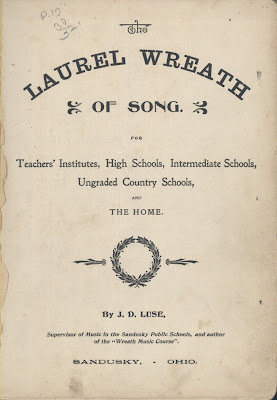 “Sweet Spring is Returning” was written by F. Silcher, and arranged by J. D. Luse. 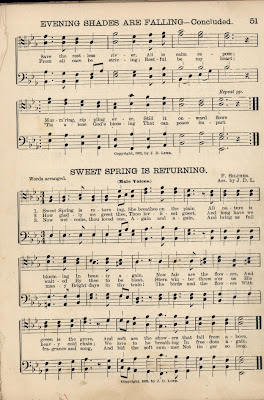 In 1904, Professor Luse moved back to Columbus, where he planned to devote his time to his publishing business.
Posted by Sandusky Library Archives Research Center at 9:33 AM No comments: 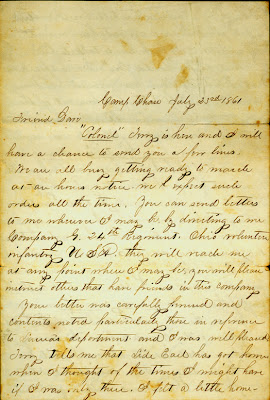 On July 23, 1861, Samuel Clock from Monroeville, Ohio wrote a letter to his cousin David Clock. Samuel, who was born James Samuel Clock, was serving as a First Lieutenant in Company G of the Ohio 24th Infantry. He was at Camp Chase at the time he wrote the letter. 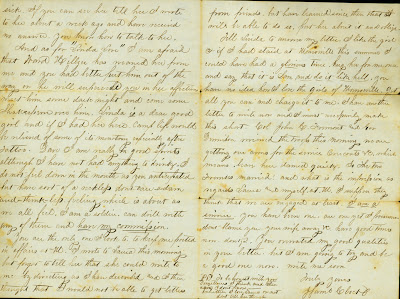 Sam discussed how the troops had been reviewed by Colonel John C. Fremont and Governor Dennison. They were soon to be receiving arms and overcoats, and he was to be ready to receive orders at any time. Most of Sam’s letter dealt with matters of the heart. He was not sure if he loved Linda or not, but he had hoped to spend time with her that summer, had he not enlisted in Army. A transcription of Sam’s letter is below. 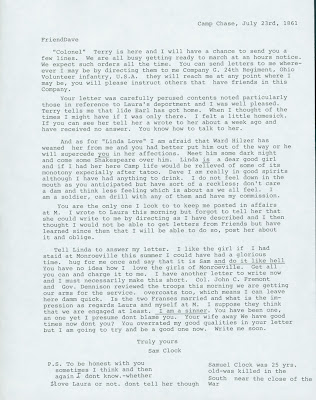 Military records from the American Civil War Soldiers database at Ancestry Library Edition indicate that that a J. Clock resigned from the 24th Ohio Infantry on October 25, 1861. However, on March 20, 1863, he enlisted as a First Lieutenant in Company L of the Third Ohio Cavalry. Near the end of the Civil War, James Samuel Clock wat wounded at Macon, Georgia. He died on July 2, 1865, after the war ended. The book, History of the Firelands, by W. W. Williams, tells us that J. Samuel Clock was the son of Samuel and Maria (Vroman) Clock of Ridgefield Township, Huron County, Ohio.
Posted by Sandusky Library Archives Research Center at 1:08 PM No comments: 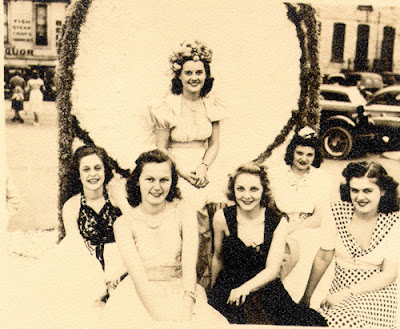 Exhibits were displayed at the Cedar Point dock at the foot of Columbus Avenue. A tour of the city and area wineries was held on Friday, September 20, with the queen and her court in attendance. A banquet was held on Friday evening, with Ohio Governor John Bricker as the speaker. On Saturday, September 21, a Grape Growers’ Institute was held at Sandusky High School, then on Adams Street. The Ohio Grape Festival Parade was held at 3 p.m. on Saturday. Thousands lined the streets of Sandusky to view the many floats, bands, and marching groups. The Engels and Krudwig float was judged as the best float. Its theme was “God Bless America.” 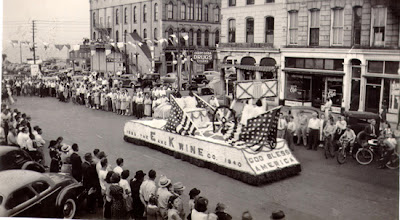 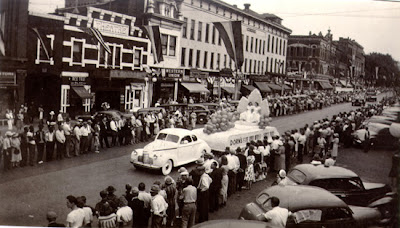 The float sponsored by Mantey’s Vineyard and Winery, from Venice, Ohio, featured a revolving book, to represent a “best seller.” Mary Mantey held the pages open. 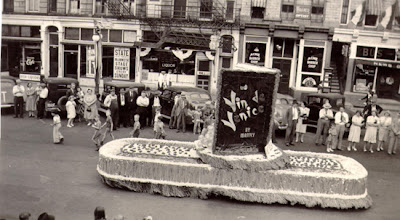 The Sandusky Star Journal of September 22, 1940 reported that an estimated 75,000 people attended the various events during the 1940 Ohio Grape Festival. Visit the Sandusky Library Archives Research Center to see more historic photographs from this and other Grape Festivals held in Sandusky, Ohio.
Posted by Sandusky Library Archives Research Center at 3:45 PM 2 comments: 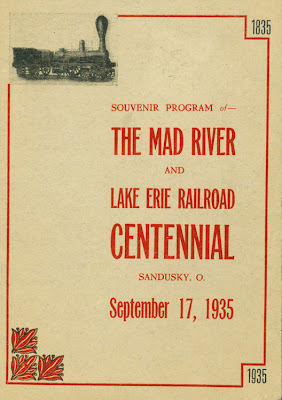 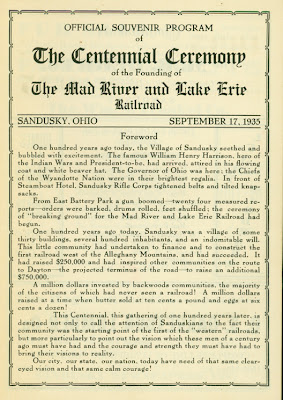 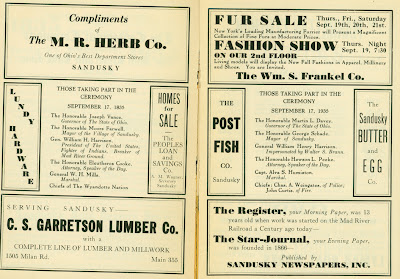 Rev. T.J.C. Stellhorn gave the invocation at the Centennial Ceremony, which took place at Jackson Junior High School in Sandusky. After Mayor George C. Schade welcomed the attendees, Professor Harlow Lindley, secretary of the Ohio State Archaeological and Historical Society addressed the group. The progress of railroads was discussed by C. G. Stevens, superintendent of the B & O Railway, and George T. Carlin of the Railway Express Agency spoke about the progress of railway express service.
A reenactment of General William H. Harrison turning over the first shovel of dirt at the 1835 groundbreaking ceremony took place, with Walter S. Brann representing General Harrison, who later would become President of the United States. Governor Martin L. Davey gave the address, followed by an oration by local historian Hewson L. Peeke. The Sandusky High School band provided music for the ceremony, and Rev. William F. Murphy closed with the benediction. 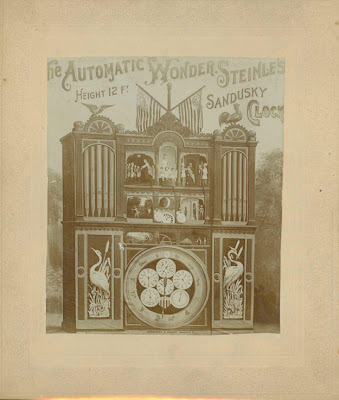 In 1897 Frank Steinle exhibited an automated clock in the pavilion of a summer resort at Johnson’s Island. Frank Steinle was a German immigrant who settled in , where he worked as a cooper. It took Mr. Steinle twenty five years to build the clock. The two thousand pound mechanical clock was twelve feet tall and ten feet wide. The cabinet was made of oak and walnut.  Mr. Steinle’s daughters stated that he had no plans or diagrams for building the clock, but that he had based it on the clock in . There were five themes on the clock: the races of man, the four periods of life, angels, patriotism, and religion. Figures waved flags on the hour, and angels struck bells on the quarter hour. Dials on the lower half of the clock showed the earth revolving on its axis, the phases of the moon, the twelve signs of the Zodiac, the day of the week, as well as the month, year, and season. A pipe organ inside the clock played popular tunes. According to notes in the historical files at the , Ferdinand V. Seibert did art work on the face of the clock.
Admission was charged to see the clock, which Mr. Steinle clamed was “The Greatest and Handsomest Work of Mechanical Ingenuity of the Present Day.”  After the summer season was over, Steinle dismantled the clock, packed it up, and returned the pieces to . In the 1970s the clock, which had been in storage in the former Steinle property on Tiffin Avenue, was re-discovered. Cedar Point acquired the Steinle clock. After repairing and restoring some of the clock’s parts, the Steinle clock was put on display at the Town Hall Museum at Cedar Point. An article about Mr. Steinle’s automatic clock was featured in the August 31, 1973 issue of the Toledo Blade.
Posted by Sandusky Library Archives Research Center at 11:41 AM No comments: 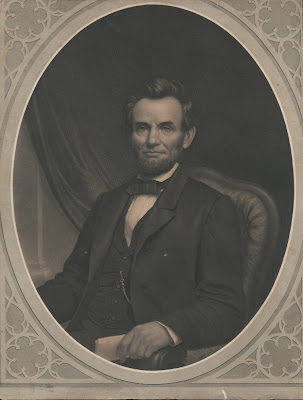 Mathew Brady’s photographs of Abraham Lincoln and the Civil War have become icons of the early days of photography. Join us on Wednesday, September 14, at 12:00 p.m. to hear the story from Matthew Brady (portrayed by Mark Holbrook), the world renowned photographer and chronicler of the American Civil War and the presidency of Abraham Lincoln. This program is sponsored in part by the Ohio Historical Society. Registration is requested, but not required.
Posted by Sandusky Library Archives Research Center at 8:21 AM No comments:

Dedication of Historical Marker at the Cholera Cemetery 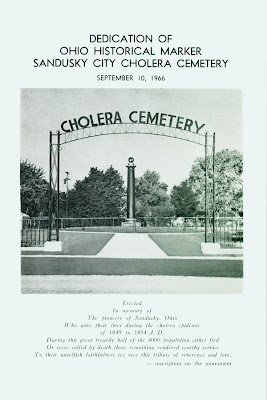 On September 10, 1966, the Ohio Historical Society’s marker at the Cholera Cemetery was dedicated. Charles E. Frohman composed the wording on the text of the marker. The arch, which had been designed by Artist Frank W. Smith, was donated by the grandchildren of John Lay, Sr. Serving as Master of Ceremonies at the marked dedication was Charles E. Frohman. Dr. C. F. Lavender, President of the Erie County Medical Society spoke, along with Daniel R. Porter, executive director of the Ohio Historical Society. Music was provided by the Sandusky High School Band. The invocation was given by Rev. Msgr. William Armitage, and Dr. Theodore Stellhorn, Jr. gave the benediction. Also participating in the day’s events were the Boy Scouts, Girl Scouts, and Camp Fire Girls. 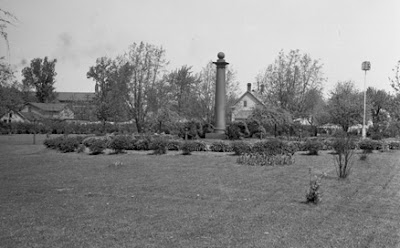 Two sources which include historical details about the cholera epidemics in Sandusky are chapter XIV of Hewson Peeke’s A Standard History of Erie County, Ohio, published in 1916, and chapter 9 of Sandusky Then and Now.

Another outstanding resource relating to the cholera epidemic of 1849 is Cholera Victims of 1849 in Sandusky, Erie County, Ohio, by Katharyn L. (Huss) Wunderley. Mrs. Wunderley, who was an avid genealogist, spent hundreds of hours researching the names of the individuals who perished from cholera in 1849. She consulted the above two books, along with History of Erie County, Ohio, edited by Lewis Cass Aldrich, local newspapers, church records, and cemetery records. Two other resources used in Mrs. Wunderley’s research were the Cholera Hospital Register and the Cholera of 1849 and the Opinions of Medical and Other Professional Gentlemen in Regard to Its Origin and Proper Treatment, both accessible at the Ohio Memory Online Scrapbook.
Posted by Sandusky Library Archives Research Center at 9:07 AM No comments: 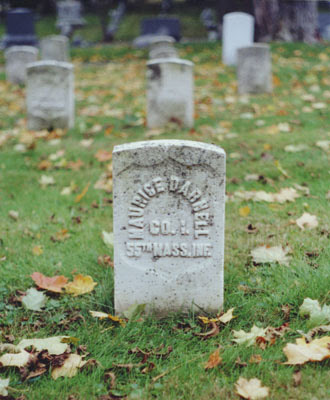 As this is a walking tour, please wear appropriate shoes and outerwear and be prepared to stand or walk for at least an hour. Registration is requested. To register, call 419-625-3834 and press 0 to speak with a switchboard operator (10-5, Monday-Friday) or press Option 6 to leave a message.

Looking for an innovative new way to experience the Civil War Heroes Cemetery Walk? Print out our Smartphone walking tour brochure and give it a try!
Posted by Sandusky Library Archives Research Center at 8:46 AM No comments: 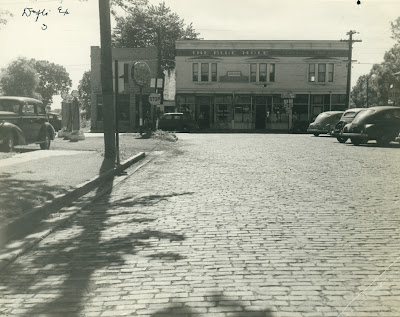 Email ThisBlogThis!Share to TwitterShare to FacebookShare to Pinterest
Labels: Castalia 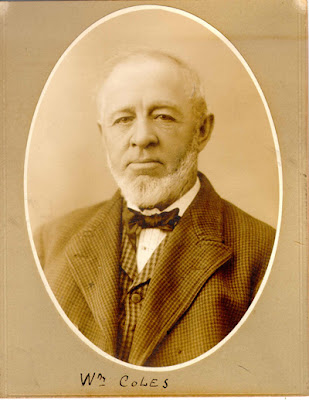 William Coles immigrated to Sandusky, Ohio in 1848, from King’s Cliff, England. He was only two years old at the time he came to the United States. Mr. Coles was Sandusky’s first safety director. He served on several other municipal boards in Sandusky throughout his life. From 1898 to 1910, Mr. Coles operated a transfer and drayage business at the foot of Columbus Avenue. Pictured below are several employees and horses associated with the business. 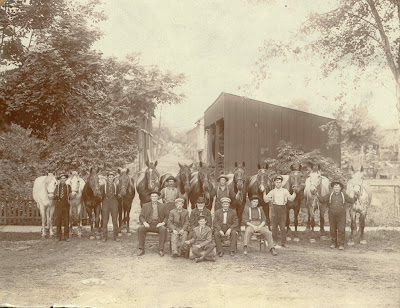 A tribute to William Coles by members of the Masonic Lodge in Sandusky stated in part: “He has lived in Sandusky all his life and has been identified with its business interests in many ways. His priorities as a pioneer are challenged by none. Almost any morning, winter or summer, if you are out early enough, you will meet him coming up town from his home on Second Street with an elastic step and bright eye that are indicative of his youthful spirit.” William Coles took an active interest in Masonic work for 43 years, and he was raised to the Sublime Degree of Master Mason on May 20, 1889. On June 30, 1933, William Coles did suddenly at his home at 915 Second Street in Sandusky. Funeral services for Mr. Cole were held at the family residence under the auspices of Science Lodge No. 50. Burial was at Oakland Cemetery. A lengthy obituary for William Coles is found in the 1933 Obituary Notebook at the Sandusky Library.
Posted by Sandusky Library Archives Research Center at 1:21 PM No comments: