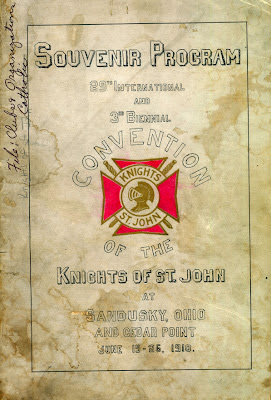 The Knights of St. John, a Catholic fraternal organization, held their convention in Sandusky, Ohio from June 19-26, 1910. Special services were held at St. Mary’s church, while business sessions took place at Cedar Point. A Grand International Parade was held in downtown Sandusky on June 20 at 3 p.m. 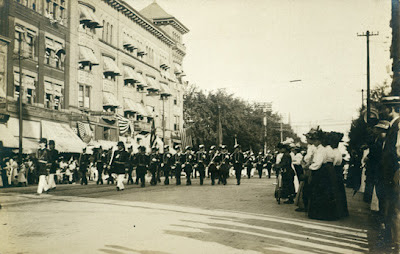 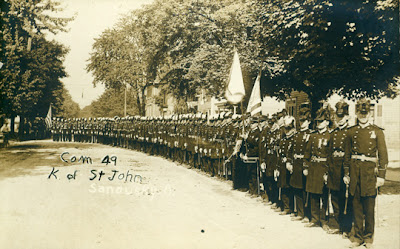 Rev. John Cavanaugh, president of the University of Notre Dame gave an address at the Grand Banquet at Cedar Point on June 23. On Friday night, a grand military ball was held at the Coliseum at Cedar Point, with the Knights of St. John in full uniform. 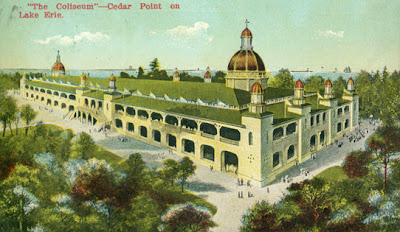 The field and staff officers for the 1st Battalion, 5th District of Ohio, were all residents of Sandusky. William Busam served as Colonel; Emil Meyer was Senior Major; Joseph Meyer was Junior Major; Lieutenant Colonel was Carl F. Joerger; Anthony Joerger was Commissary; and Adjutant was Benjamin Erney. The Sandusky Commandery of the Knights of St. John, No. 49, had their photograph taken on the steps of the Sandusky Library. 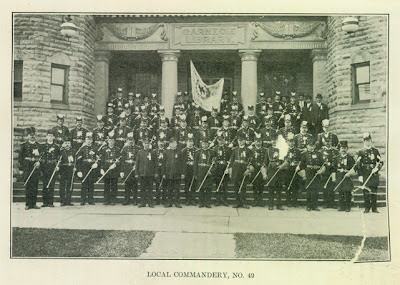 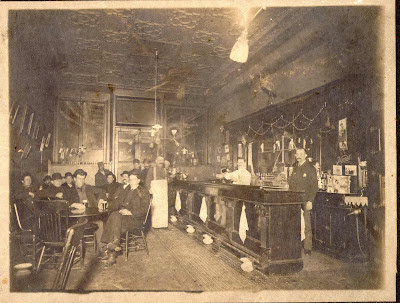 The neighborhood tavern was often a center of social life for men (rarely women) in Sandusky, particularly before the Prohibition era. It was a place to meet friends, make business contacts (or even conduct business), listen to music, or sing along with others, or just serve as a respite from the drudgery of work. Immigrants often brought their traditions with them to the saloon. And sometimes trouble came to the saloon. Join Archives Librarian Ron Davidson as he presents a brief overview of early saloons and their role in Sandusky’s culture.
Posted by Sandusky Library Archives Research Center at 12:36 PM No comments: 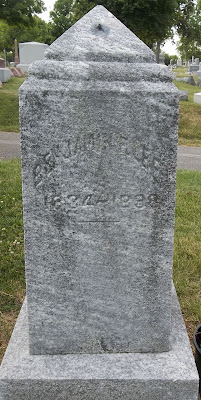 Benjamin F. Lee was born in 1835 in the state of New York. Mr. Lee graduated from Hobart College with the class of 1859. During the Civil War he rose to the rank of Captain with the 126th New York Infantry. Civil War records accessed at Ancestry Library Edition indicate that Benjamin F. Lee was wounded during the war at Harpers Ferry, West Virginia and Gettysburg, Pennsylvania. Capt. Lee left military service in August, 1864. On January 12, 1869, a U.S. patent was issued to Benjamin F. Lee for "Improvement in the Manufacture of Yeast Cakes." 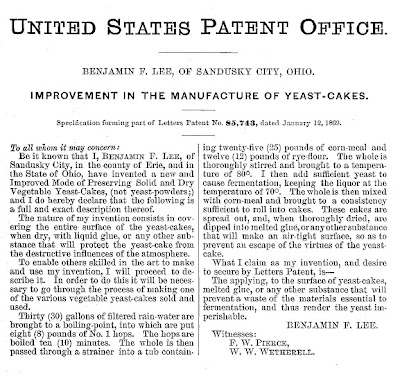 By 1871 Benjamin F. Lee and Augustus C. Means ran the Buckeye Yeast Company on the north side of Water Street, west of Wayne Street. The hop yeast made by Lee and Means was supposed to be “good at all times, quick, sure” and it was said that it was imperishable and never got wormy. The following advertisement appeared in Bailey’s Northern Ohio Gazetteer and Directory, 1871-1872.

In the mid-1880s, Benjamin F. Lee, with his brother Henry A. Lee, ran a flavoring extract business on Water Street near Jackson Street, and from 1872 to 1876, he served as Erie County Prosecutor. He was also one of the lawyers involved in the litigation that took place between Rush Sloane and the Cincinnati, Sandusky, and Cleveland Railroad in 1873-1874. Eventually  Lee left the field of law and moved to Portage County, where he was a leader in the Lake Brady Spiritualists’ Association. On April 21, 1898, Benjamin F. Lee died in a fire in a cabin at Brady Lake. Some thought that Lee had been murdered, though a perpetrator was never named. His remains were brought back to Sandusky for burial at Oakland Cemetery.
Posted by Sandusky Library Archives Research Center at 2:32 PM 1 comment:

In the Sandusky Pictures Collection of the Sandusky Library Archives Research Center is a photograph of the north side of East Market Street in Sandusky which was taken in September of 1956. At the northeast corner of Columbus Avenue and East Market Street, Donald A. Smith operated the Smith Drug Company, which was affiliated with the Walgreen Agency. Prescriptions and health and beauty aids were sold here, along with light meals served at the luncheon counter. Baked goods were sold at Cassidy’s Fine Foods at 121 East Market Street. Moving east down East Market Street we find Jean Frock’s, the Neisner Brothers five and ten cent store, and the William S. Frankel store, which sold women’s apparel. Walter’s Shoe Store was located at 151 East Market Street, and the large Sears and Roebuck department store was at 161 East Market. Not pictured in this picture is the Joseph’s Store which was at the end of the block. Joseph’s sold women’s and children’s ready to wear clothing in the mid-1950s.  On the left side of the picture you can see the clock from the Citizens Banking Company which was in the Feick Building at that time, on the south side of East Market Street.  Visit the Sandusky Library to browse through decades of historical Sandusky City Directories. The earliest Sandusky City Directory in our collection dates back to 1855.
Posted by Sandusky Library Archives Research Center at 9:10 AM No comments: 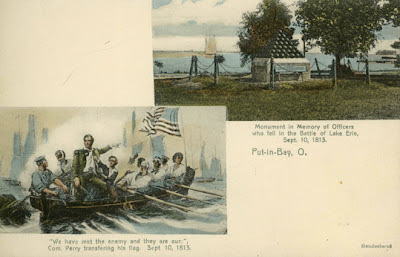 With the fall of Detroit and the capture of the Northwest Army in August of 1812, early settlers in modern day Erie County found themselves on the front line of the conflict. This program will focus on the War of 1812 in our area and will provide those who attend with a guide to the nearby War of 1812 sites that they may choose to visit during this, the bicentennial year of the conflict. Registration is requested.
Posted by Sandusky Library Archives Research Center at 9:29 AM No comments: 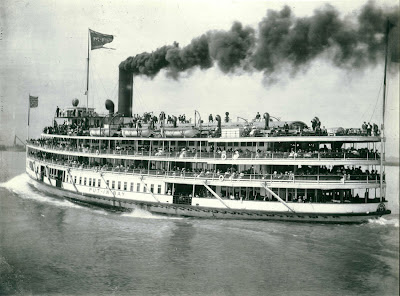 From 1911 to 1949 the steamer Put-in-Bay transported passengers from Detroit to Sandusky, with stops at Put-in-Bay and Cedar Point. The ship was launched at Detroit, Michigan on March 25, 1911. An eight year old youngster named William McFall Heyser broke a bottle of champagne which had been made in Sandusky over the steamer. According to an article in the March 26, 1911 issue of the Sandusky Register, there were thousands of people gathered at the Wyandotte yards of the Detroit Shipbuilding Company for the special occasion. Built by the Detroit Shipbuilding Company, the Put-in-Bay was a part of the Ashley and Dustin steamer line. As she traveled down the Detroit River, the captain greeted area residents with three long and two short whistles. The Put-in-Bay featured four decks, and could hold over three thousand people. Passengers danced in the steamer’s ballroom to the music of orchestra leader George Finzel. In an advertisement from 1918 the round trip fare was seventy cents for week days, and $1.10 for Sunday excursions. 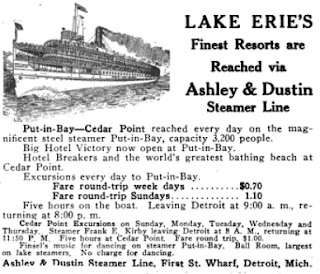 In 1949 the Put-in-Bay was transferred to a route that went from Detroit to Port Huron, and in 1953 she was sold for scrap. To read a history of the passenger boats that operated in the Sandusky area, see the Twin Anniversary Edition of the Sandusky Register-Star-News from November 24, 1947, which covers the history of passenger boats in our area up to that time. Ask at the Reference Services desk if you would like to view this historic edition.
Posted by Sandusky Library Archives Research Center at 8:30 AM No comments:

Before the location was known as Shoreline Drive, the State of Ohio had offices located at the foot of Hancock Street in Sandusky. Below is a picture of several buildings owned by the state of Ohio, adjacent to the railroad tracks, around the 1920s or 1930s. The words Ohio Fisheries Building can barely be read on the building that is to the far left of the photo. 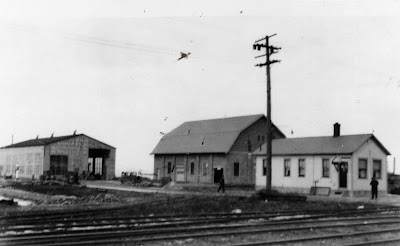 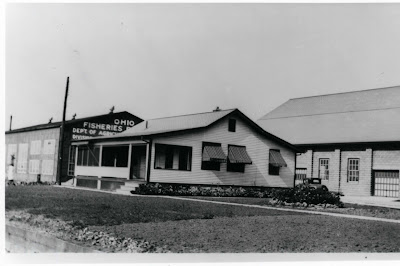 Some of the offices that were located at the foot of Hancock Street in Sandusky were the Ohio Department of Agriculture’s Division of Conservation, the Division of Conservation and Natural Resources, the Division of Shore Erosion, and the Division of Wildlife. Names of the various State of Ohio offices changed throughout the years. By looking through historical Sandusky City Directories under the heading State Offices, you can get a better idea of what specific state offices were operating in Sandusky, Ohio in any given time. Though these buildings no longer remain, today the Ohio Department of Natural Resources has several employees at the ODNR's Coastal Services Center located at 105 West Shoreline Drive.
Posted by Sandusky Library Archives Research Center at 12:56 PM 1 comment:

District Sales Managers of the Hinde and Dauch Company 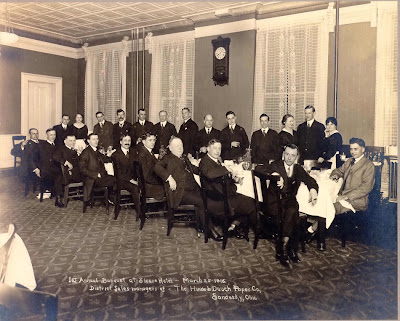 On March 25, 1916, Sandusky photographer Edward H. Schlessman took a picture of the District Sales Managers of the Hinde and Dauch Company. The banquet was held at the Sloane House Hotel in downtown Sandusky. In the front row, from left to right are: Pearl Rehfuss, Dean Beery, Russell Whitney, Charles Kiefer, Pete Klotz, Louis Wendt, Henry Squire, George Ranft, D.A. Larkin, L.L. Thigpen. In the back row: Thomas Gagen, Carl Schott, Herbert Orr, Edwin A. Walter, E.J. Eiserman, Fred Emmons, Lawrence D. Morton, Harry Felton, Joe Conley and Charles Roehme. (The three ladies in the picture were not identified.) It appears as though the image of the head of D.A. Larkin was literally cut from another picture, and pasted onto the picture above. Of course this picture was taken long before modern digital photography and photo editing software existed. 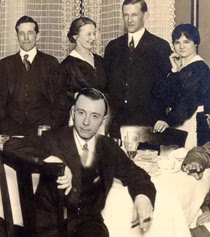 The Hinde and Dauch Company operated in Sandusky and several other cities for many years. The company was nationally known in the field of corrugated shipping boxes, and was issued dozens of U.S. patents. Visit the Sandusky Library Archives Research Center to learn more about the historic residents and businesses of Sandusky and Erie County.
Posted by Sandusky Library Archives Research Center at 4:46 PM 1 comment: 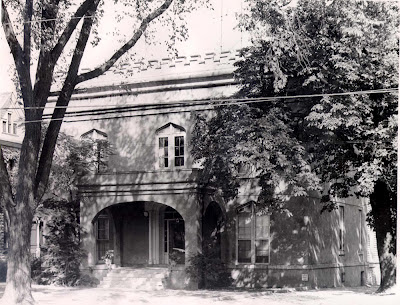 According to Helen Hansen’s book At Home in Early Sandusky, the materials and workmanship were “of the finest” quality when George Reber built this stone house at what is now 803 West Washington Street. Reber was born in Lancaster, Ohio in 1809, and he moved to Sandusky in 1838. He was a prominent attorney in Sandusky for many years. His home at 803 West Washington Street was built about 1849. The home originally featured a large entrance hall, and a stairway made of cherry wood. An earlier residence was located at 603 West Washington Street, built in about 1846. The Rebers’ next door neighbors at their earlier residence were Mr. and Mrs. William Townsend, who died in the 1849 cholera epidemic. 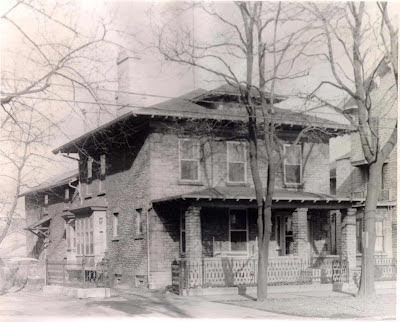 During the years of litigation among the early proprietors of the city of Sandusky, George Reber served as one of the lawyers. After the suits were settled, Mr. Reber secured a large amount of real estate, which he improved and then left to his family after his death in 1885. He was married twice, first to the former Amanda Boalt, and secondly to Nancy Stiles Kilbourne, the widow of James Kilbourne. One of George Reber’s daughters, Sallie Reber, was a popular singer on the New York stage. A grandson, Reber Nettleton Johnson, became a well known violinist, and later was on the faculty of the Oberlin Conservatory.

You can read more about the residences of more early Sandusky residents in At Home in Early Sandusky. The book was based on a series of historical articles by Mrs. Hansen which appeared in the Sandusky Register in 1958 and 1959.
Posted by Sandusky Library Archives Research Center at 3:38 PM 1 comment: