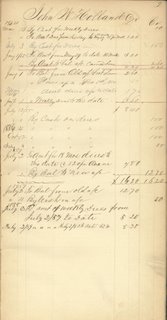 The Bay City Guards were a volunteer infantry militia formed in Sandusky in the mid-nineteenth century. Led by a Sandusky physician, Captain R.R. McMeens, the Guards were organized in the Fall of 1851, with 62 men serving as original members. A retrospective article about the Bay City Guards in the July 23, 1875 Sandusky Register stated that the members of the guard were all native-born American citizens; the Sandusky Yager Rifle Company, another militia formed at about the same time, consisted exclusively of German-born American citizens. Also operating at that time was a company called the Sandusky Artillery. It is not clear exactly when these militias disbanded, but the same Register article mentioned above noted that the Yager Company was the only group still in existence at the outbreak of the Civil War.

The Sandusky Library Archives Research Center holds a "petit ledger" that was opened on March 13, 1854 to record financial transactions for each member (the last transaction looks to have been in 1857). It appears that the men paid dues, from which they received payments for expenses. The page shown above records the transactions of John Holland, who was a sign painter by profession, and who was the last surviving member of the Bay City Guards before his death in 1924 at age 99. Here is his photograph from the W.A. Bishop portrait collection, circa 1900. 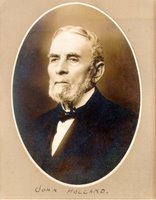 Now that you have seen the preserved records of a military veteran, why not help to record and preserve the history of our veterans today? The Veterans History Project needs your help. This project, sponsored by the Library of Congress and hosted locally by the Sandusky Library and the Ohio Veterans Home, seeks to record the stories of living veterans through oral history. We need your help, to interview veterans and record their stories for future generations. It's not difficult -- and will even be fun and rewarding! You can record your conversations with veterans on your own, or you can make arrangements to use the facilities provided at the Ohio Veterans Home. Your contribution will help to preserve the stories of our veterans for future generations. For more information, contact the Sandusky Library or the Ohio Veterans Home.
Posted by Sandusky Library Archives Research Center at 10:48 AM 1 comment: 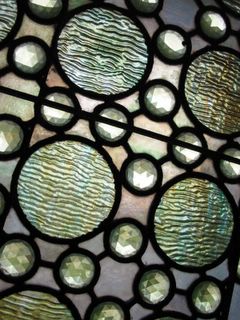 Have you ever paused to notice the stained glass in the doors, transom and windows in the Adams Street entrance to the Sandusky Library? Tracking down the artist who designed them revealed quite a history.

The windows were designed by Jessie May Livermore. Jessie May was born and raised in Chicago, but her mother was a Carpenter from Bloomingville. When the library was under construction, Jessie May's father, Darius Livermore, a Chicago decorator, won the contract for the stained glass in the library. The local papers commented that it was appropriate that a woman designed the windows, as the library was such a labor of love for the women of Sandusky.

In her early life, Jessie May made her living as an artist. She took a four year course in architectural and mechanical drawing and continued her studies at the Dearborn Seminary, from which she graduated in 1889. In 1901, it was said that her designs had been used in some of the largest decorative contracts that have been given out in the country. She competed with seven leading designers to obtain the contract to design the decorative elements for the Gougar home in Lafayette, IN. Mrs. Gougar was a nationally known suffragist. Jessie May designed a six pane oriole window that depicted all the seasons in a single scheme. She also designed an apple blossom scheme for one room. In addition to art glass, she also designed frescoes for the interior of the house. The house still stands today in Lafayette, where it is a funeral home.
For reasons unknown, Jessie May gave up her career as an artist, and became a teacher in the Chicago Public Schools, where she worked for 37 years, until being forced into retirement at age 65. She didn't receive a pension, and her retirement assets had suffered during the Great Depression.

Her father was a homesteader in Oklahoma, which is where Jessie May spent her summer and holiday vacations. She had hoped to start an artistic dude ranch. In the cellar of the home were rows of saddles, hand painted china, party favors, and chairs, as well as cases of fancy foods, all meant for the dude ranch she was never able to open.

Her health suffered dramatically after being forced into retirement and she died in December, 1935. She is buried in the family plot in Oakland Cemetery.

Posted by Sandusky Library Archives Research Center at 10:14 AM No comments:

It has been only relatively recently that the service of African-American soldiers in the Civil War has been adequately recognized. In the Sandusky area during the war, fifteen African-American men volunteered for service in Company I of the 55th Massachusetts Volunteer Infantry. The men were mustered into service in May and June of 1863 at Camp Meigs in Readville, Massachusetts.

In January 1863, Governor John Andrew of Massachusetts received permission to recruit an African-American regiment to fight for the Union. The 55th was a sister regiment to the 54th Massachusetts Volunteer Infantry, whose heroic service in the war was featured in the movie, Glory. This second unit was formed due to the overwhelming response from men who sought to serve in the 54th. A total of 222 men from Ohio served in the Massachusetts 55th.

Among the Sanduskians who served, William H. Johnson was killed in battle on July 2, 1864 at James Island, South Carolina. Morris Darnell and Elijah J. Brown 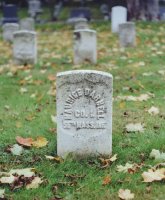 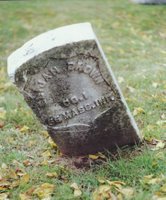 returned home to Sandusky after the war, and are buried in Oakland Cemetery; Frank Gardner, Joshua Cole, and Thomas Robinson are buried at the Ohio Veterans Home.


African American soldiers comprised over ten percent of the Union Army, and over 18,000 African-American men served in the Navy. You can read an article about the Sandusky recruits in the June 2, 1863 issue of the Sandusky Daily Commercial Register, available on microfilm in the Sandusky Library Archives Research Center. Military records from the Civil War and other wars may be found on the Ancestry Library Edition research database, which can be accessed from within the library.
Posted by Sandusky Library Archives Research Center at 3:17 PM 1 comment: