Found accidentally, while researching something else. . . . a paragraph in a column called "Breakfast Table Talk," in the May 7, 1924 Sandusky Register:

"Yes. We have some bananas" said Al Maschari, W. Water-st. when he received Tuesday what is said to be the largest bunch of bananas ever consigned to this city. The bunch weighed 119 pounds, and held some 20 dozen or more of the famous fruit.

Of course, the opening line is a reference to a song that became a major hit in the United States in 1923, Yes, We Have No Bananas. Bananas were still a relatively new item in the American market, first imported in 1870, but by the 1920s they were one of our most popular fruits. Few other fruits were available in northern states during the winter, before advanced cold-storage facilities and high-speed transportation. 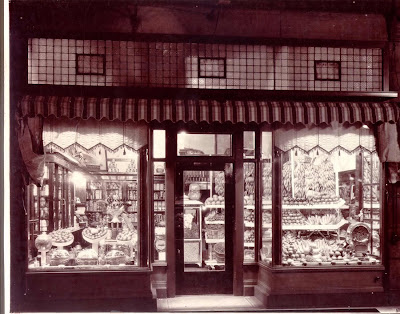 Unfortunately, we do not have any images of the Maschari store, which was located at 115 E. Water St. in 1924. Of course, we are always willing to accept images of Sandusky businesses and other local scenes -- if you have any to offer, we're here!
Posted by Sandusky Library Archives Research Center at 10:53 AM 1 comment:

Fred Kelsey: What a Character 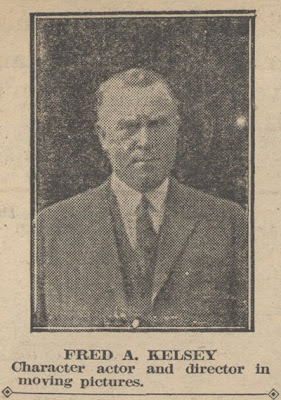 Fred Kelsey, a pioneer character actor in both silent and talking motion pictures, was born in Sandusky on August 28, 1884. Known as “the detective of the screen,” Kelsey’s trademarks were a derby hat, a big cigar, and his thick moustache. He appeared in several Three Stooges movies.

In his listing in the Internet Movie Database his film credits total over four hundred. Kelsey started out directing in 1909, but by the 1920’s he was well-established in his role of the bungling policeman or detective. Fred Kelsey was so typecast as a comedy cop that in 1944 animator Tex Avery patterned the detective in the MGM classic cartoon “Who Killed Who” after Fred’s character.

Fred Kelsey often came back to Sandusky for the annual reunion of the “Quien Sabe” Club, a local men’s organization. The photograph below was taken at the Club’s fiftieth reunion in August, 1953 at the Log Cabin Inn in Bay View. 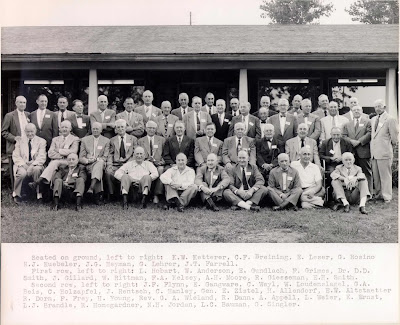 Fred Kelsey died on September 2, 1961. He is buried in Valhalla Memorial Park in North Hollywood, California.
Posted by Sandusky Library Archives Research Center at 11:52 AM 1 comment: 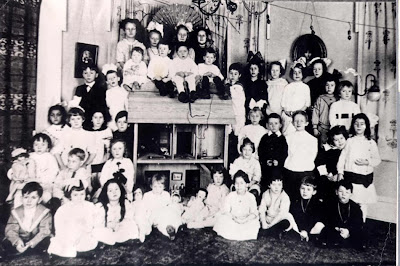 On January 19, 1914 Miss Clare Jeanette Peterson celebrated her sixth birthday with a party attended by many children at her home in the 400 block of Columbus Avenue. Clare was one of four daughters of Dr. and Mrs. H.D. Peterson. Dr. Peterson practiced medicine in Sandusky until his death in 1923. Clare married Mr. R. L. Foster and was living in West Palm Beach, Florida in 1958.
Posted by Sandusky Library Archives Research Center at 1:45 PM No comments:

Email ThisBlogThis!Share to TwitterShare to FacebookShare to Pinterest
Labels: Peterson

An entry from Ohio Biographical Sketches, 1876 (available online through Ancestry Library Edition) states that John H. Hudson was born on July 5, 1824 in Auburn, New York to Emmanuel and Margaret (Boyd) Hudson. He was associated with the Buffalo and Erie Railroad, and the Mad River and Lake Erie Railroad, before accepting positions with the United States Treasury Department during the Civil War. 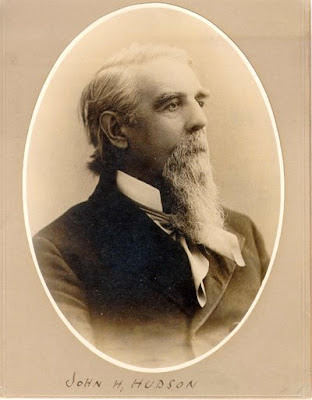 John H. Hudson married Louisa Clark in 1844 in New York state. Their son Henry F. Hudson was born on February 29, 1852. Louisa died quite young, leaving John a widower with a young son. In October of 1852, John Hudson married Elizabeth A. Orton, the daughter of Rev. Samuel and Clarissa Gregory Orton. In 1869, John and Elizabeth Hudson were living in Sandusky, Ohio, where John was a grain dealer.

In 1873 John H. Hudson was elected to the State Senate of Ohio. He was re-elected in 1875, defeating a local newspaper man, I. F. Mack. Charles E. Frohman wrote in his book about I. F. Mack, Sandusky's Editor, that Mack did not take losing the election to Mr. Hudson very gracefully. He wrote his reflections about the election in a newspaper column on October 27, 1875 stating that the Republicans who voted for John H. Hudson “would have voted for the devil, Jeff Davis, or a Jesuit priest, just as cheerfully.”

Elizabeth A. Orton was born on June 16, 1827. In a genealogical book about the Orton family, An Account of the Descendants of Thomas Orton of Windsor, Connecticut, 1641, the writer describes Elizabeth: “She is a lady of unusual intellectual activity and force and does not allow the burden of years to weigh down her vivacity or depress her ambition.” After the death of Mr. Hudson in 1893, Elizabeth Hudson was left in difficult economic circumstances. (Mr. Hudson had suffered financial losses in the 1890’s.) To support herself, she painted watercolor paintings, gave art lessons, and rented out rooms. It is believed that Mrs. Hudson was a mentor to artists Emma Matern, Charles F. Shuck, Elizabeth Nourse, and Charles Courtney Curran.

Following Mrs. Hudson’s death on November 27, 1911, the Art Study Club of Sandusky adopted a resolution which was printed in the December 2, 1911 Sandusky Register. It read in part, “Resolved, That as a loving tribute to her memory we, the members of the club of which she was a most honored and worthy one, always contributing to its upbuilding by her interest, enthusiasm and thorough knowledge of the subject of art was ever a source of inspiration to the members. We express our deep regret over her removal from our midst where she was found worthy of our highest esteem.”

Mr. and Mrs. John H. Hudson are buried in Block 56 of Sandusky’s Oakland Cemetery. In the photograph below, Mrs. Hudson can be seen gazing at a portrait of Mr. Hudson at their home on 318 Huron Avenue in Sandusky. 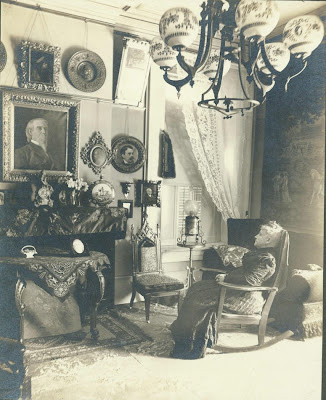 The brother of Elizabeth Orton Hudson was Edward Orton, Sr., who was the first president of the Ohio State University, and served as the state geologist of Ohio for many years.
Posted by Sandusky Library Archives Research Center at 4:19 PM No comments: 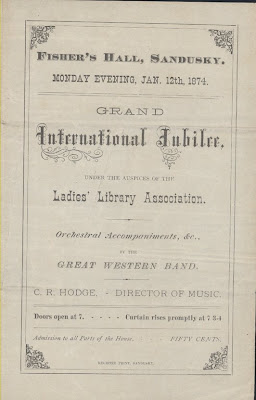 C. R. Hodge was the director of music, and orchestral accompaniment was provided by the Great Western Band. The first selection of the evening was “God Save the Queen,” sung by the entire chorus, the ladies being dressed in national costume. A quartet consisting of Mr. Curran, Mr. Nugent, Miss Alden, and Miss Barber sang “The Campbells are Coming.” Four gentlemen sang a selection entirely in the German language.

W. T. West, John R. Miner, H. F. Spencer, and one other man were dressed as Native Americans. They sang one song entitled “America,” and came back for two encores, providing the audience with great amusement. Other features during the Jubilee included songs representing China, Ireland, France, and Africa. The Jubilee ended with the full chorus singing “The Star Spangled Banner.” Just before the last chorus, the curtain was drawn back to present a patriotic tableau. Miss Sallie Mills was dressed as “The Goddess of Liberty.” Attendant guardians stood by her side, and kneeling at her feet were two individuals representing freed slaves.

The January 13, 1874 Sandusky Register reported that “This concert must net to the Association a very fair amount and will enable the ladies to commence the new year with bright prospects for the future.”

The Great Western Band, from the Arts Collection of the Archives Research Center: 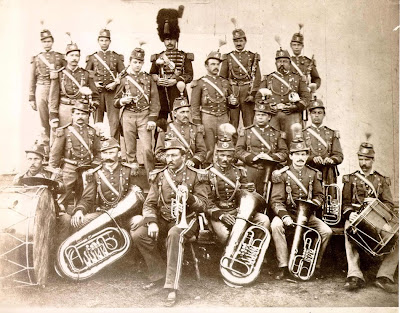 Program Announcement: A History of the Firelands, with Henry Timman 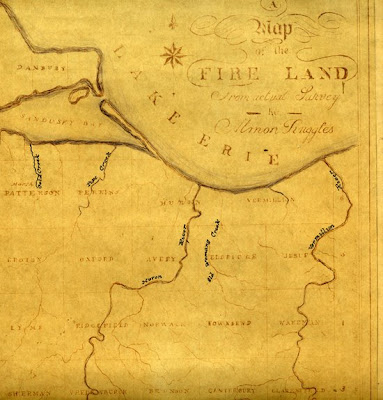 Join us in the Library Program Room on Saturday, January 17, at 2:00 p.m. when renowned local historian Henry Timman will speak about the history of the Firelands. Mr. Timman has researched and written extensively on the history of our region, including, since 1972, writing a column, "Just Like Old Times," for the Norwalk Reflector with early articles subsequently published in book form. Mr. Timman has been an officer of the Firelands Historical Society for many years and served until his retirement as Chief Deputy Clerk of the Huron County Probate Court. Registration is requested but not required. To register, call 419-625-3834.
Posted by Sandusky Library Archives Research Center at 4:02 PM No comments:

A ball was held at C. W. Marsh’s Assembly Room on January 8, 1827 in Sandusky, Ohio, to celebrate Andrew Jackson’s victory at New Orleans. The Battle of New Orleans was the final battle in the War of 1812. The invitation below was issued to “Daniel Newton and Lady” on December 26, 1826. Daniel Newton came to Sandusky in 1819, and married Eunice Clemons in 1820. 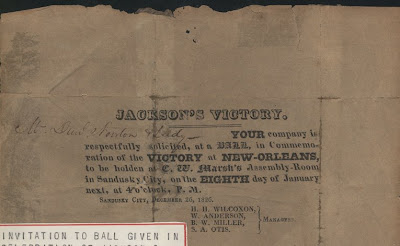 Managers of the Jackson’s Victory Ball were: H. H. Wilcoxon, W. Anderson, B.W. Miller, and S.A. Otis. The original invitation was given to the historical collections of the Sandusky Library by Mrs. William K. Marshall.
Posted by Sandusky Library Archives Research Center at 1:35 PM 1 comment:

Email ThisBlogThis!Share to TwitterShare to FacebookShare to Pinterest
Labels: Jackson, Newton, War of 1812 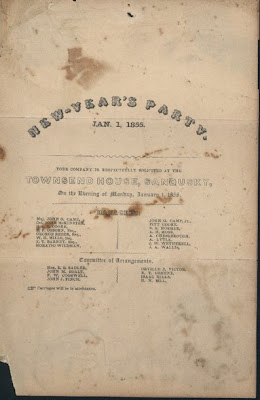 Did you get your invitation?