On the afternoon of August 31, 1910, aviation pioneer Glenn Curtiss established a record for flying over water when he landed his biplane on the beach at Cedar Point. He had taken off from Euclid Beach in Cleveland about an hour and fifteen minutes earlier, flying over Lake Erie, parallel to the shore. His return trip to Cleveland the next day added to his record. The event surely was the highlight of the summer for Sanduskians in 1910. Thousands flocked to see the flight at its take-off and landing points, with many more -- in Vermilion, Lorain, and elsewhere along the route -- positioning themselves on the shore, hoping to spot Curtiss and his flying machine in the air.

The Sandusky Register offered regular preview reports in the days before the flight. Pictures of Curtiss and diagrams of his proposed flight were featured on the front pages. In one report, the paper noted that part of Curtiss' inspiration for attempting the flight to Cedar Point was a prize of $15,000 (an equivalent value of more than $300,000 today) offered by Cedar Point Manager George Boeckling, with a $5,000 bonus if the flight was completed in less than one hour. He was portrayed as enthusiastic, but not overly excited over his prospects, exuding an air of quiet confidence, with a businesslike demeanor.
The people of Sandusky (and Cleveland), it seems, were much more excited about the flight than the aviator himself was. The Register reported in detail about the preparations made in anticipation of Curtiss' arrival: Spotters were assigned along the route to telephone information about the airplane's progress; boats to Cedar Point were to run as frequently as possible, to bring people from downtown Sandusky to the beach; the Eastland brought passengers from Cleveland, the Kirby, from Detroit; many businesses in Sandusky planned to close for the day, so that their employees may watch the arrival; men with megaphones were assigned to broadcast updates to the spectators on the beach.
Unfortunately for those who gathered to witness the flight on Tuesday, August 30, there was disappointment, as the winds in Cleveland were too strong for Curtiss to fly. The Register reported that, upon the announcement of the delay, "[t]here were cries of 'Oh!' and 'Ah' and 'Fake!' and 'Stung!' with poo-poos and hisses." Some out-of-town spectators, of course, had to go back home, missing their opportunity to witness history. 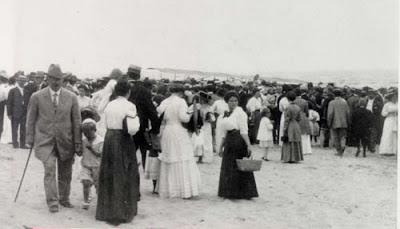 Success finally arrived the next day, Wednesday August 31. In Sandusky, it was arranged that the fire whistle, at the Meigs Street Water Works, was to sound three times upon news of Curtiss' departure from Cleveland (where it was said that 100,000 people watched his flight). It did so at around 1:15 that afternoon. The Register reported that "[t]he effect of the first toot was magical. Men grabbed their hats and started for the boat landing at the foot of Columbus avenue. Women fell into line with them . . . They had but one idea in mind and that was to see Curtiss." He was greeted on the beach by thousands of local spectators, and by Boeckling, who later that day gave a banquet in his honor. 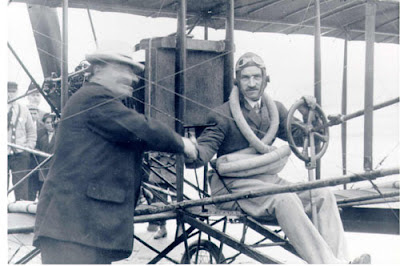 On the following afternoon, Glenn Curtiss returned to Cleveland the same way he came.

(Copies of the photographs included in this article were donated to the Sandusky Library by Reinhardt Ausmus, one of Sandusky's own aviation pioneers.)
Posted by Sandusky Library Archives Research Center at 2:37 PM 3 comments:

A native of Nashville, Tennessee, Herbert Farrell arrived in Sandusky and founded the Farrell-Cheek Steel Company in 1910. The firm manufactured small and medium weight steel castings, which were used “to meet specific requirements for automotive, truck, railroad, mining machinery and structural industry uses.” Cheek was the name of Herbert Farrell’s father-in-law, Joel O. Cheek, who was best-known as the founder and owner of the Maxwell House Coffee Company.

Farrell-Cheek provided employment for hundreds of individuals, including many who moved here from the Southern states to find a better life. At its peak, the factory employed over eight hundred local residents.
The World War II era was an eventful time for the company. During the war, many women were hired to work at the plant, as local men were called to serve in the Armed Forces. Because many of the products manufactured at Farrell-Cheek were essential to the war effort, in 1944 the federal government briefly took control of operations in the factory, in response to a labor dispute. Also during the war, Dr. Lyle Steen Hill, a Sandusky radiologist, worked as a physician during the day, and worked third shift in the engineering department of Farrell-Cheek, testing the steel products in the lab. He joined Farrell-Cheek in November 1942, expressly to help in the war effert. Dr. Hill was an electrical engineer, as well as a physician and radiologist. 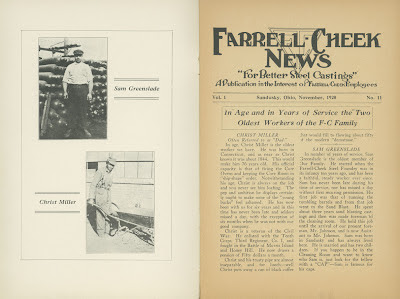 Beginning in January of 1920, the company started publishing the “Farrell Cheek News.” (An example is shown above.) The newsletter offered biographies of employees, cartoons, recipes, along with tips for health and safety. Later the publication was called “Sparks from the Ladle.” (You can find Dr. Hill's story in the October 29, 1943 issue.)

In the 1927 City Directory the “Lloyd-George Studios” advertised studio props and scenery as well as production of pageants, plays, minstrels and reviews with amateurs. The proprietors of the business were Sandusky High School graduates Lloyd F. Weninger and George J. Lehrer. The Lloyd-George Studios continued in business until the late 1930’s, though it was managed by Mr. Lehrer alone for many years. 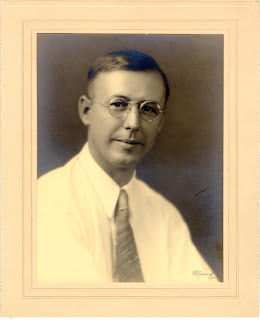 Lloyd F. Weninger (pictured above) was an artist and musician. He wrote a song entitled “Victory” for Sandusky High School in 1914, and he illustrated the booklet “Our City Sandusky” for the centennial celebration of the city of Sandusky. He went on to graduate from Carnegie Tech, where he taught for 31 years. 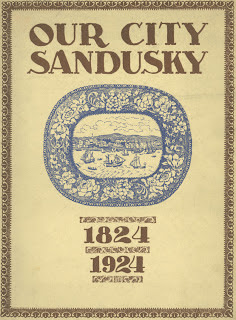 George J. Lehrer was a nationally known actor and director. He performed in Broadway, Vaudeville, and Hollywood productions but is best known for his one man show in which he portrayed Abraham Lincoln. The front page of the February 11, 1961 Sandusky Register has a feature article about George Lehrer’s Lincoln performances.

The Lehrer family has a long history of community involvement in Sandusky and Erie County. George J. Lehrer’s grandfather, Rev. J. G. Lehrer was an early pastor of Zion Lutheran Church, and his father, George T. Lehrer ran a local drugstore and was elected mayor of Sandusky in 1910, later serving as city manager. 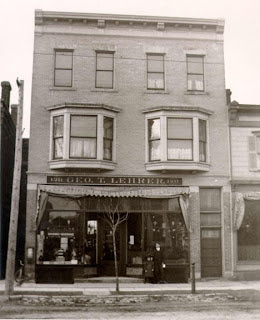 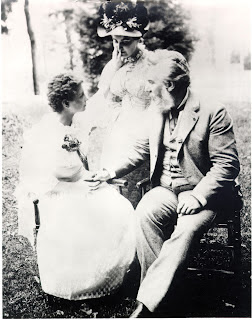 On June 30, 1925, Helen Keller, the famous blind and deaf social activist, addressed the national convention of the Lions Club at Cedar Point. She was accompanied by her teacher, Ann Sullivan-Macy, who assisted her in her presentation.


The Sandusky Register described her visit and summarized her life's accomplishments in a front-page article in the July 1, 1925 edition. She spoke at the convention to solicit aid for the American Foundation for the Blind, for which she worked for over 40 years. While there, she and her teacher were inducted as honorary life members of the Lions Club, the first women accepted into the organization.

Substantial portions of her speech were quoted in the article. In her speech, she explained that the object of the American Foundation for the Blind "is to make the lives of blind people worth while by increasing their economic value, and by giving them the joys of normal activity, which is their birthright."

Helen Keller died in 1968, at age 87, ending a lifetime of accomplishments and public service.


(The image above, from the Sandusky Library's collections, shows Helen Keller, at left, with her teacher, Ann Sullivan, and Alexander Graham Bell.)
Posted by Sandusky Library Archives Research Center at 12:36 PM No comments: 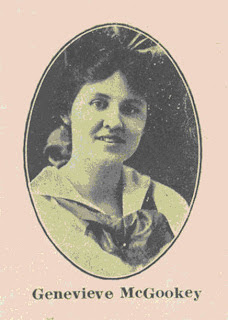 Does anybody remember these? 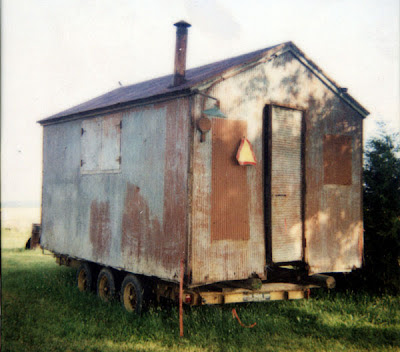 Local historians are trying to gather information about these portable sheds, which were used in the past as polling places during elections. Here is the text of their request:
Help! The Heritage Society of Erie County is looking for information about two metal buildings that have been donated to the group. They are currently being restored to use in the Heritage display at the Erie County Fairgrounds. All we know at this time is that one member remembers having voted in one in 1949 in the city of Sandusky. Neither the Board of Elections nor the Sandusky Library have been able to provide any further details.
If you have knowledge of these buildings, please contact Janet Senne (419-625-4341) or Donna Dahs (419-359-1520). If no answer, leave a message on the answering machine.
. . . Or you can post a message in the comments here.
Posted by Sandusky Library Archives Research Center at 7:35 PM 3 comments: