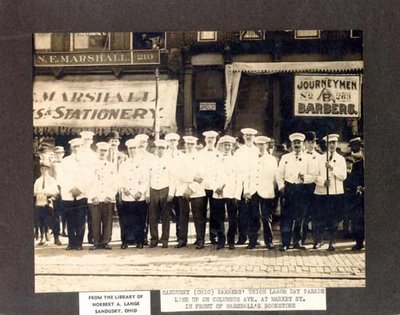 In honor of the working men and women throughout the history of our community, this post commemorates Labor Day. Labor Day was first celebrated in 1882 in New York. It was made a national holiday in 1894. 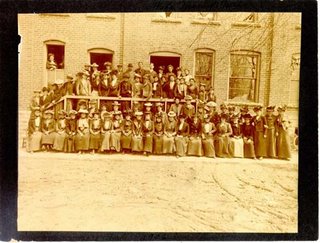 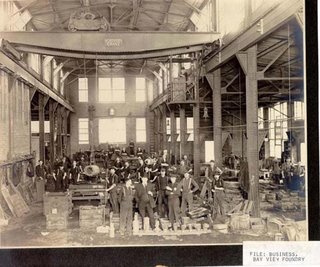 The men in the picture on the left (below) are workers at the Bay View Foundry (which operated from around the beginning of the 20th century to the 1930s), at Shelby and Water Streets, circa 1905; the photo on the right (above) shows the women workers (and their male supervisors) at the Jackson Underwear Factory, North Depot and McDonough Streets, circa 1906. The Jackson Factory operated from 1899 to around 1933.

If you have historical documents describing the activities of working people in Sandusky and Erie County -- documents such as: labor union records; photographs of people at work; personal letters and papers; business records; etc. -- please consider donating those documents to the Sandusky Library Archives Research Center. Contact the Archives Librarian via email or at 419-625-3834.
Posted by Sandusky Library Archives Research Center at 2:27 PM No comments:

Clubs and Organizations in Erie County 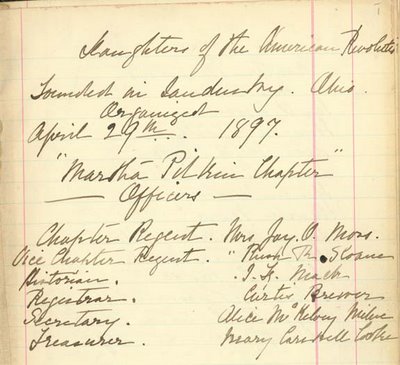 For better or worse, social clubs and community organizations are not as popular as they once were. With the advent of movies, television, the Internet, the automobile, and many other developments in technology and culture, clubs and organizations play a smaller role in the community than they did, say, in 1897, when the Daughters of the American Revolution, Martha Pitkin Chapter, was founded in Sandusky. (An excerpt from the D.A.R. secretary's book is shown above.) In the nineteenth century and well into the twentieth century, the role of clubs and organizations in the community was dominant. For an analysis of this development in society, you might want to read Robert Putnam's book Bowling Alone (in our library collection at 306.0973 PU) -- but don't take my world for it, since I haven't read the book yet. 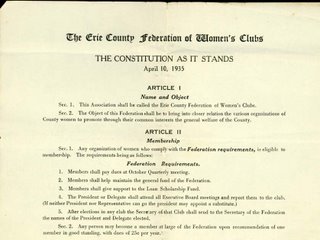 It does seem clear, however, that studying the history of local clubs and organizations will help you understand the culture and society from which they come (or at least that portion of society represented by the members of that particular club). The Sandusky Library Archives Research Center holds records and documents from several local clubs and service organizations, including: the Daughters of the American Revolution, Martha Pitkin Chapter; the Erie County Federation of Women's Clubs, and the Sandusky Federation of Women's Clubs; the Art Study Club; the Men's Literary Club; the Sunyendeand Club; the Nineteenth Century Club; the Sandusky Concert Association; and others. Thanks to the help of our summer archives intern, we have new and updated finding aids describing many of these documents and collections, for those interested in researching this aspect of our history.

For those of you involved in a local organization or who owns the records of local clubs from the past, we encourage you to consider depositing those records with the Archives Research Center, to preserve these documents for future generations. We will be glad to explain how we will store and record your donation in the library as a record of our community. For more information, call (419-625-3834) or email the Archives Librarian. 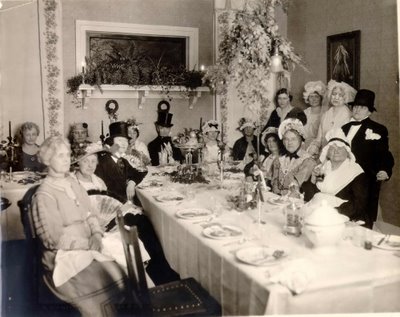 The photo above is of a costume party given by the Art Study Club (probably circa 1920), where guests came dressed as famous literary characters. (From the Library's historic photo collection -- CLUB-047.)
Posted by Sandusky Library Archives Research Center at 1:15 PM No comments:

Do you know where this is? 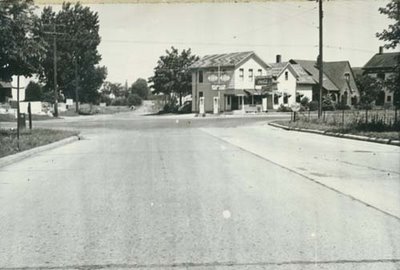 It looks a lot different today, but it's an intersection in Erie County.

The answer is in the comments section.
Posted by Sandusky Library Archives Research Center at 9:50 PM 1 comment: 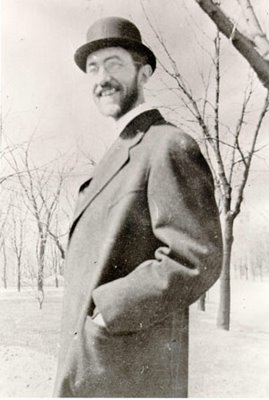 One of the most interesting characters to contribute to Sandusky's history is Edwin Lincoln Moseley, a science teacher at Sandusky High School, and later one of the original professors on the science faculty at what is now Bowling Green State University.

Edwin Moseley was born in Michigan in 1865 and graduated from the University of Michigan in 1885, the youngest in his class. He joined the faculty of Sandusky High School in 1889, after he returned from participating in a scientific expedition that took him across the Pacific to Hawaii, the Philippines, China, and Japan. (Here is SHS class of 1912, with faculty. E.L. Moseley is in the back row.) 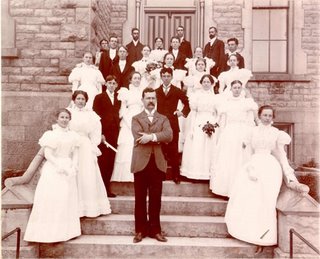 While at Sandusky High School, Moseley was perhaps most admired for inspiring his students to learn through direct observation and to develop independent thinking. 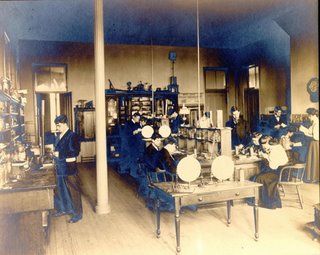 He used both the school laboratory (one of his SHS physics classes is shown here) and field trips to teach his students -- he frequently brought his students on scientific explorations of Sandusky Bay and the Lake Erie Islands, to study the geology and flora of the region. While a teacher at SHS, he operated a natural history museum in the school building, managing a collection of about 17,000 specimens (an exhibit area of the museum is pictured below). 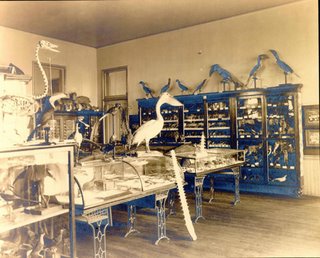 While in Sandusky, his reputation as a scientist and a scholar became so great that, in 1914, he was invited to become the founding science faculty (yes, faculty -- he was the only science professor when he started there) at the new Bowling Green State Normal College (now Bowling Green State University). He continued his research and teaching in Bowling Green until his retirement in 1936. He died in 1948, leaving a legacy of strong scholarship and devoted students.

For more information about Professor Moseley: Relda E. Niederhofer and Ronald L. Stuckey have produced a book that may be the definitive biography of the professor, Edwin Lincoln Moseley: Naturalist, Scientist, Educator; the book is available in the Biography section of the Sandusky Library and as a reference book in the Genealogy department.
The Sandusky Library Archives Research Center has a small collection of papers and publications by and about Professor Moseley, including many of his scientific publications (such as: Sandusky Flora; Trees, Stars, and Birds; Lake Erie: Floods, Lake Levels, Northeast Storms; and others) and a small number of letters and documents he wrote. A finding aid to the collection is available; contact the library reference department (419-625-3834) or the Archives Librarian for more information. Additionally, The Center for Archival Collections at Bowling Green State University holds a collection of Edwin Lincoln Moseley papers, primarily covering his time in Bowling Green.
Posted by Sandusky Library Archives Research Center at 2:21 PM No comments: 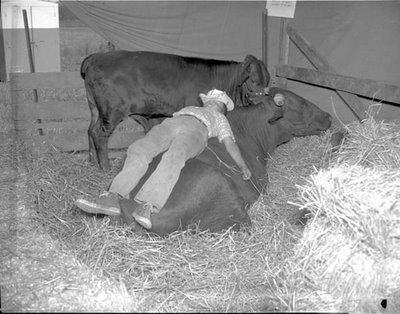 . . . but don't wear yourself out!
(Scene from the Erie County Fair, circa 1960.)
Posted by Sandusky Library Archives Research Center at 10:18 AM No comments:

The Ohio State Fair in Sandusky, 1858 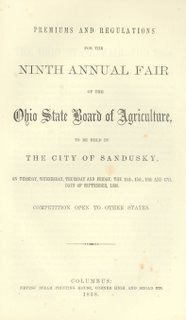 As many of you probably know the 2006 Erie County Fair begins on August 8, and has been held annually for more than 150 years. (Be sure to see the online exhibit, Celebrating 150 Years of the Erie County Fair on the Library's website.) But did you know that Erie County once hosted the Ohio State Fair?

The first Ohio State Fair was held in Cincinnati in October 1850. In its early years (1850-1874), the site of the fair was rotated among cities throughout the state. In 1858, it was Sandusky's turn to host the fair. The Ohio State Board of Agriculture selected Sandusky over Toledo, Zanesville, and Cleveland after a committee of local community leaders, led by F.D. Parish, made the case for Sandusky during meetings in December 1857. The Board wanted to hold the fair in the northern part of the state that year, and Sandusky was selected because of its central location and easy accessibility by railroads from all over the state. The Sandusky fair was held September 14-17, 1858.

Much preparation went into developing the grounds and exhibition halls. The fairgrounds were placed on what was then the southeast outskirts of town -- Huron Avenue and Hancock Street were the main thoroughfares into the fair. The Sandusky Commercial Register (August 5, 1858) noted with pride that "[s]even hundred stalls [for livestock] are to be erected on the Fair Grounds -- fully three hundred more than have been provided at any State Fair in Ohio." Additionally, there was a Farm Implement Hall, Mechanic's Hall, Floral Hall, and other exhibit buildings and tents, as well as a horse racing track. The Dining Hall, according to the Register was "an almost interminable structure . . . capable of feeding an almost indefinite number of persons." Sanduskians expected thousands would come to the fair, and hotels and steamboat were prepared to accommodate the visitors. The West House, a huge hotel for the time, was opened in time for the fair. (One newspaper article estimated that around 16,000 people visited the fair on its busiest day, although that might be exaggerated.)

Along with the usual livestock and produce competitions, and displays of new farm implements and household devices, an interesting event was the "Female Equestrianism" competition. The first prize award was a "Side-Saddle, Bridle, and Martingal [sic] made by F.H. Francisco of Sandusky." Women who wanted to enter the competition were allowed to register "incognita." The newspaper article describing this event noted that '[t]he most celebrated physicians have declared their opinion that nothing contributes more to the development of health, bodily vigor, blooming beauty, and that grace of action which is impossible without strength of muscle, in which our American women are too deficient, than riding on horse-back."

Aside from some rain on a couple of the fair days, it appears that the Ohio State Fair in Sandusky was a success.

The Sandusky Library Archives Research Center holds a copy of the fair's regulations (shown above) and a catalog of cattle and horses to be exhibited, as well as a "diploma" issued to E.J. Messer for a threshing machine.

(I was hoping to have a couple more graphics for this post, but as is all-too-common, Blogger has failed to cooperate. Sorry.)
Posted by Sandusky Library Archives Research Center at 3:16 PM No comments: