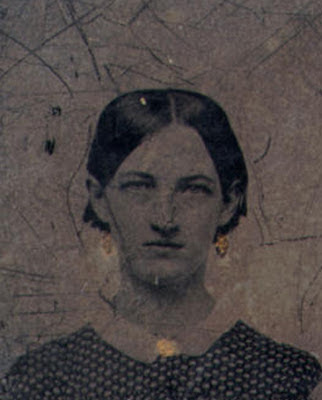 Mary Marilla Stephens was born in 1846 in Perkins Township to Mr. and Mrs. William Stephens. When Mary was 17, she moved to a rooming house on Madison Street in Sandusky, to be close to the high school in Sandusky. On the evening of September 18, 1864, Mary overheard several Confederate men talking loudly about a plot to overtake the guards at Johnson’s Island prison and release several hundred Confederate officers.

Mary was frightened, as her brother, Jefferson Stephens was on duty as a guard at Johnson’s Island. She slipped out of the rooming house, and hurried to the home of her sister-in-law, Mrs. Washington Stephens. Washington Stephens, Mary’s brother, was stationed in Washington D.C. at the time. The proper authorities were tipped off, and, perhaps sensing this, the plotters aborted their plans -- but not before they hijacked two steamers, the Philo Parsons and the Island Queen (both shown below). 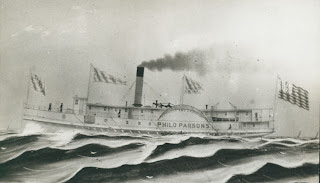 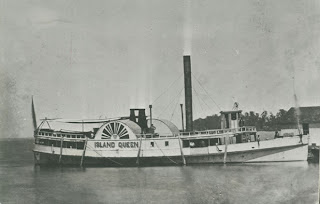 You can read more about the plot to free the prisoners at Johnson’s Island in Charles E. Frohman’s book Rebels on Lake Erie, and online at the Cornell Library New York State Historical Literature collection, among other sources. Additionally, a new book, written by Ohio native James E. Duffey, Victim of Honor: The Story of John Y. Beall and the Northwestern Conspiracy, studies the conspiracy through a focus on its leader, John Yeats Beall. (Not yet reviewed, nor in the library; we hope to have a copy soon.)


In 1867 Mary Marilla Stephens married Jesse Greene, who was a descendant of the Taylor and House families who settled in Perkins Township in 1815. They had five children. Mary was widowed in 1894, but she lived to the age of 93 years. Her obituary stated that she was “one of the best known women in Erie County.” She had been a member of the Perkins Methodist Church, Ladies Aid Society, Home Missionary Society, and was a charter member of the Perkins Grange. She is buried in Perkins Cemetery in the Greene family plot.
Posted by Sandusky Library Archives Research Center at 4:36 PM No comments:

In the early days of Ohio statehood, one of the primary missions of the state government was to sponsor the development of transportation systems, such as roads and canals, throughout the state. One of the early highways in Ohio was the Columbus and Sandusky Turnpike, created via legislation of the General Assembly of the State of Ohio in 1826. The road followed a route that is roughly the same as routes 4 and 23 today. 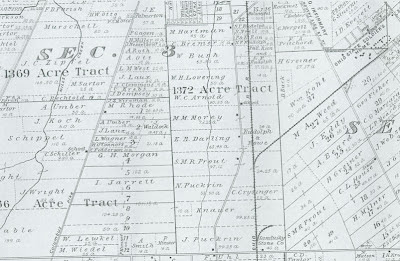 James Kilbourne, Ohio Pioneer, surveyed and laid out the several towns and one hundred miles of roadway for the Columbus and Sandusky Turnpike. It took almost eight years to construct the 106 mile long roadway, which consisted primarily of wood planks or logs laid cross-wise directly on the ground (commonly called a "corduroy road"). Henry Howe stated that for many years the Columbus and Sandusky Pike was “the great thoroughfare of the State from the river to the lakes.” It is believed that Charles Dickens travelled along this road in his travels through America, described in his book, American Notes. (He was not very pleased with this corduroy road however: "The very slightest of the jolts with which this ponderous carriage fell from log to log, was enough, it seemed, to have dislocated all the bones in the human body.")

In Seneca County the Columbus and Sandusky Pike was the main route for the Underground Railroad. Many runaway slaves were hidden in the Omar Tavern until nightfall, when they were transported to the Seven Mile House in Erie County.

In Erie County the Pike was also known as Hayes Avenue. Charles Frohman tells us in Sandusky's Third Dimension that “upon no road in the city was there more travel.” Many businesses, churches, and hospitals were located on Hayes Avenue. The Schweinfurth Brothers grocery store is an example of business along the Pike in Sandusky. The store was on the southwest corner of Hayes Avenue and West Park Street, from about 1898 to 1923. 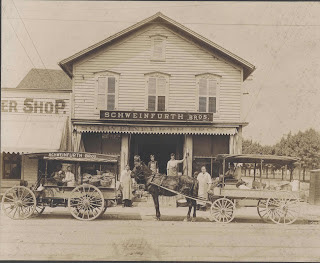 By 1873 conditions on the Columbus and Sandusky Pike had deteriorated. (Although the road had many critics, other than Dickens, from its early days -- some believed the road was constructed shoddily, using inadequate materials.) It was hazardous to drive on the road at night because of the dangerously deep ditches. When it rained the road was referred to as the “mud pike.” Eventually the portion of the Columbus and Sandusky Pike in the city of Sandusky was transferred to the city, so necessary improvements could be made.

A trip to the cemetery can prove very productive when you are looking for information about the people in your Family Tree. Tombstones provide dates of birth and death, and may include evidence of an individual’s military service, or fraternal affiliations.

The tall monument below is at Oakland Cemetery, a memorial to three local pastors who died in the Cholera Epidemic in Sandusky. 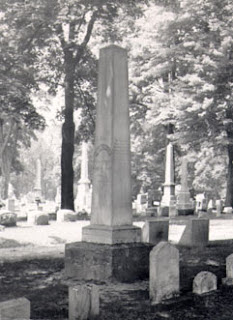 The Archives Research Center of the Sandusky Library has a variety of sources about local cemeteries. The ERIE COUNTY, OHIO CEMETERY CENSUS BEFORE 1909, edited by Katharyn Huss Wunderly and Patty Dahm Pascoe, lists cemetery inscriptions from over sixty cemeteries located in Erie County. You will also find cemetery records from Ottawa County, Huron County, and other counties in the Archives Research Center. Housed with the microfilm cabinet are several rolls of film which contain cemetery records of Erie County. The cemetery microfilming project took place in 1989, and are arranged by location.

There are many web sites on the Internet which contain cemetery records. Two well known sites are: http://www.findagrave.com/ and http://www.interment.net/.

Also found in the Archives Research Center is a limited number of photographs from area cemeteries. Pictured below is a photograph of the tombstones of four members of the Cooke family, buried in North Monroeville. These individuals were related to Eleutheros Cooke, Sandusky’s first lawyer. 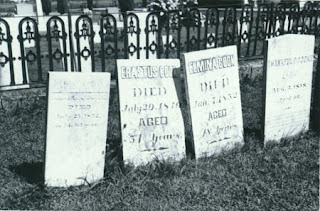 A Confederate Civil War Cemetery is located on Johnson’s Island. This photograph was taken about 1910. 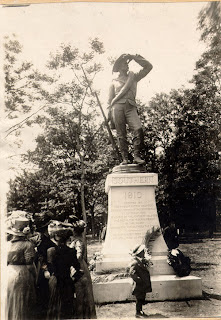 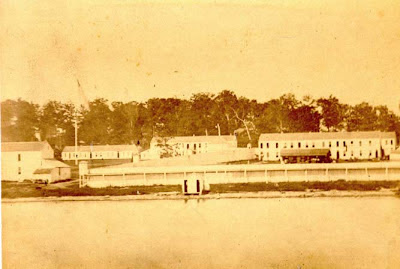 Bring your lunch and join us in the Library Program Room as we explore topics in local history.

On Wednesday, July 18 at noon Kim Brownlee, Assistant University Archivist at the University of Toledo, will talk about Charlie Pierce, a prisoner-of-war at the Johnson's Island Civil War Prison Camp. Her article about Pierce was in the July-September 2006 issue of Timeline magazine.

Posted by Sandusky Library Archives Research Center at 8:57 AM No comments: 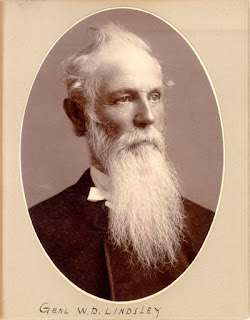