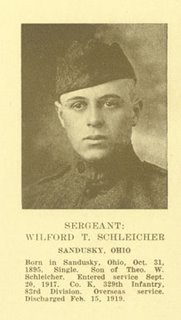 In honor of all veterans, in commemoration of Veterans Day on November 11, we offer a tribute to a World War I veteran from Sandusky. Wilford Schleicher was born in Sandusky on October 30 (or 31), 1895. A sales manager for the American Crayon Company, his life changed dramatically in 1917, when he was called to service when the United States entered the Great War that had been going on in Europe since 1914.

Wilford Schleicher was enlisted into the United States Army on September 20, 1917, and assigned to Company K of the 329th Infantry, 83rd Division. He was trained at Camp Sherman in Chillicothe, where most of Sandusky's recruits went for training. In June of 1918, he and his fellow soldiers departed the United States for the war zone of Europe. By October of that year Corporal Schleicher had been promoted to sergeant. After honorable service in the French war zone, he returned to his native land on January 31, 1919 and received his honorable discharge about two weeks later.

Like most other men who served (unfortunately not all), Wilford Schleicher returned to his normal life, back home in Sandusky. He went back to work at the American Crayon Company, and worked there for nearly fifty years; he was a member of the Trinity United Methodist Church, the American Legion, and the Veterans of Foreign Wars. He lived on Polk Street with his wife, Gladys, who died in 1974. Mr. Schleicher died in November 1982, at age 87.

The Sandusky Library Archives Research Center is privileged to have two scrapbooks compiled by Mr. Schleicher. One scrapbook (two pages of it are shown above) contains photographs of his military adventures, along with mementoes such as postcards, military passes and other official documents, and a wrapper for a candy bar from the Red Cross Canteen. The other scrapbook consists of newspaper clippings describing the war and local soldiers. Additionally, the archives holds many other items relating to the First World War, a war little understood by most Americans.

Posted by Sandusky Library Archives Research Center at 9:41 AM No comments:

It was 43 years ago this month that the writer Harry Van Stack died in Sandusky. Born in South Africa, he was a world-traveller, and made his name by writing about his journeys in newspaper columns and in books. He wrote a column for the Sandusky Register from the mid-1940s to the early 1960s.

His longest "journey" was aboard the prison ship Success, where, from the 1920s to the 1940s, he frequently spent time travelling throughout North America, presenting lectures about the ship and its history and legends. According to one of those legends, the Success was built in Burma in 1790, and was used to transport convicts from England to the newly-settled land of Australia. Although it was in fact built in Burma, the real story is that the Success did not come into existence until 1840. All available evidence indicates that the ship was actually built in 1840 as a merchant ship sailing the Indian Ocean; from 1847 to 1852, it transported emigrants from England to Australia. In 1852 the Australian government purchased it for use as a prison, and later for ammunition storage. The Australian government used it for these purposes probably until the mid-1880s. (It was not used to transport English convicts to Australia, as some legends claim.)

Alexander Phillips purchased the ship in 1890 and soon began using it for travelling exhibitions, presenting exhibits and lectures on crime and punishment. (This is probably when the fictitious stories became popular.) The cells of the ship were opened for viewing and various articles of punishment were displayed on the decks -- only some of which might have been actually used on the ship during its prison days. For example, the "iron maiden," displayed on the ship, certainly was not used as a means of punishment in 19th-century Australia, and is possibly simply an artifact of legend.

In 1943 the ship sank while moored in Sandusky. In 1945 it was refloated and towed to Port Clinton, where the then-owner lived. This owner (along with vandals) began stripping the ship for its valuable items. After long neglect, the Success burned to the water line in July 1946, in a fire of mysterious circumstances. Perhaps fate directed this result because, with the demise of the Success near Sandusky, Harry Van Stack also ended his journey and settled in Sandusky for the remainder of his life.

The Sandusky Library Archives Research Center holds materials relating to the ship Success during the time it was a travelling exhibit site, including books and pamphlets on the history (both real and invented) of the ship, souvenir catalogs, announcement brochures, and a set of roughly 75 photographs taken by Harry Van Stack during a voyage from Portland, Maine to Chicago for the 1933 World's Fair. Additionally, the library owns a collection of Harry Van Stack's writings and papers, including many of his newspaper columns and personal correspondence. Unfortunately, Blogger has once again refused to cooperate and allow image of some of these artifacts to be posted with this entry. If you are interested in researching any of these materials (or others) at the library, feel free to contact us or just stop in.
Posted by Sandusky Library Archives Research Center at 2:13 PM No comments:

As election day is approaching, it's a good time to talk about political campaigns that passed through Sandusky. I know it's not a presidential election year, but let's talk about some candidates for President of the United States who made campaign visits to Sandusky. 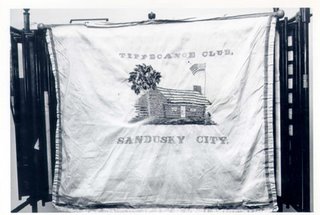 Possibly the earliest campaign visit to Sandusky by a presidential candidate was in 1840, when William Henry Harrison, the Whig Party candidate, came to town. To commemorate his visit, several women of Sandusky (including Mrs. Eleutheros Cooke) created an embroidered banner in honor of the campaign (shown above in a b&w photo). The banner, showing a log cabin on one side and an eagle on the other, is on display at the Follett House Museum. This story behind this banner is related on page 13 of the October 1896 issue of the Firelands Pioneer, available in the Genealogy section of the Sandusky Library.

During his successful 1908 presidential campaign, William Howard Taft spoke at the Ohio Soldiers' and Sailors' Home (now the Ohio Veterans Home). The photo below shows the soon-to-be President-Elect with a group of local dignitaries outside of the Soldiers Home. Taft was a close friend of Sandusky resident Edward Marsh, and apparently visited the area several times for social occasions. 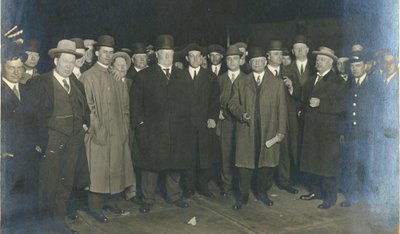 Taft's former political ally, Theodore Roosevelt, became his political opponent during the 1912 presidential campaign. Believing that Taft betrayed the progressive principles that formed the core of Roosevelt's beliefs, "TR" ran for president that year as the candidate of the Progressive Party (often called the "Bull Moose" party, in honor of a popular nickname for Roosevelt). In May of that year, Roosevelt gave a whistle-stop speech at the foot of Columbus Avenue to a large crowd of Sanduskians. Here is one of several images of that event from the library's photo collections: 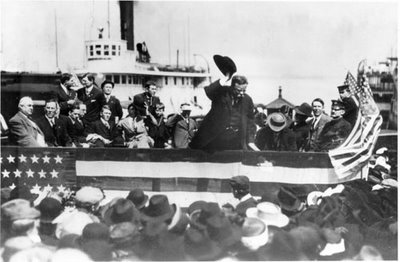 In the 1916 election, Charles Evans Hughes was the Republican candidate for president, seeking to unseat President Woodrow Wilson from his position. In September 1916, Hughes gave a speech in front of the American Crayon factory on Hayes Avenue. (Unfortunately, that photo will not post properly on Blogger.)

Another interesting local story of presidential campaigns can be found in the November 11, 1940 issue of Life magazine. In an article titled "The People's Choice," the publishers used Erie County, Ohio as a microcosm for the nation, with images of local residents and descriptions of why they chose to vote the way they did. You can read the article, and see photographs of local residents of the time (as well as a picture of candidate Wendell Willkie in Sandusky), in the Sandusky Library. Ask a reference librarian for that issue of Life magazine from closed storage.

You never know what interesting things you can find in a book -- and it doesn't always have to be a novel or history book (my preference), either. You can find some interesting reading in the Revised Ordinances of the City of Sandusky of 1887 and 1906. (Copies of each are in the Archives Research Center and local history collection at the Sandusky Library.)

For example, on the first page of the 1887 ordinances is "an ordinance to regulate ale, beer and porter houses, to aid in the preservation of peace and good order of the City of Sandusky and to abate the nuisance arising from offensive practices prohibited by this ordinance." The first section of this law stated that "it shall be unlawful for the keeper or proprietor . . . of any saloon . . . to employ any female in the supplying of or waiting on customers in furnishing ale, beer, porter, or intoxicating liquors of any kind whatever . . ." (although they did make exceptions for women who were married to the owner or were his daughters). The penalty for violating this ordinance was up to fifty dollars. (This rule was still in effect in the 1906 laws.)

In 1889, a law was passed outlawing the playing of music in saloons.

Another law, on page 6 of the 1887 ordinances, stated "it shall be unlawful for any person, in a unclothed and naked condition, to go into or bathe in the open waters of Sandusky Bay, within the corporate limits of the city, at any time after the rising of the sun and before dark." Nighttime skinny-dipping was okay, apparently.

Keep Your Cows off the Sidewalk!

In 1887, it was "unlawful for the owner or owners or any person having the custody or control of any horse, mare, mule or other beast of burden, or of any ox, steer, heifer, cow, calf, or of any swine, sheep, goat or goose, to suffer or permit the same to run at large, upon any sidewalk, street, alley, park, common or public ground, within the corporate limits of the city of Sandusky." (I hope it is still unlawful today!)

No Dressing Fish in the Summer

Also in the 1887 laws, it was forbidden "at any time between the 25th day of May and the 1st day of September of each and every year, to receive into any fish shanty, store room, store house or any other building, any fresh fish, for the purpose of dressing or salting the same."

Only a Little Gunpowder

In 1887, residents of Sandusky were prohibited from storing more than 28 pounds of gunpowder on their property, and nobody was allowed to sell gunpowder at night.

By 1906, it was necessary to have some laws regulating that new invention, the motorized automobile. For example, Section 397 of the 1906 city ordinances stated that "No person, driver or operator in charge of any automobile or motor vehicle shall move or permit the same to be driven, operated and moved at a rate of more than eight miles per hour within the limits of the city."
Posted by Sandusky Library Archives Research Center at 2:47 PM 1 comment: