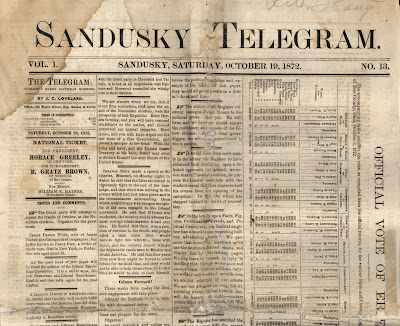 A brief Telegram article was critical of I. F. Mack’s coverage of recent candidates in the Sandusky Register. Loveland stated about the Register’s editor, “the editor has stepped beyond the limits of journalism.” Interestingly, in Charles E. Frohman’s book about I.F. Mack, entitled Sandusky's Editor, there is no mention of J.C. Loveland or the Sandusky Telegram. 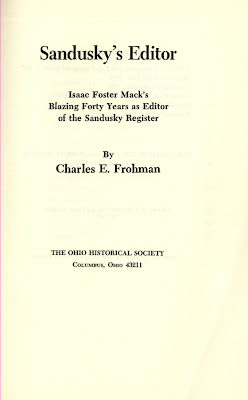 Aerial View of Cleveland Road from 1955 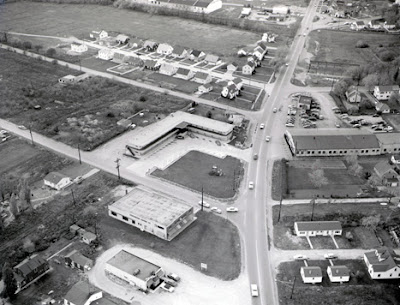 Thomas F. Root, a self taught photographer from Plymouth, Ohio, took aerial photographs in northwest Ohio for more than sixty years. After renting a plane for several years, Mr. Root purchased his own plane in 1968. Root would open the window of the airplane, bank the plane, and take the photographs out of the side of the plane. Tom Root retired in 2001, and in 2008, he transferred a portion of his collection to the Sandusky Library Archives Research Center.
Posted by Sandusky Library Archives Research Center at 10:29 PM 3 comments: 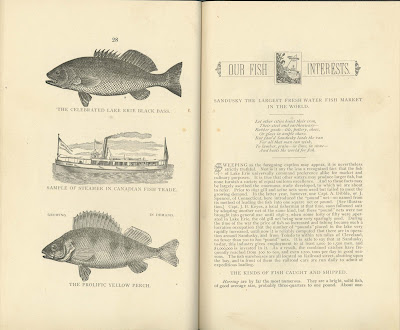 Recently added to the Sandusky Library website: The full text of the 1888 publication, Sandusky of To-Day. The book provides an interesting snapshot of business and commerce in nineteenth-century Sandusky, and is an invaluable resource for historians and genealogists. We hope that this will be the first of several historical publications to go online. You'll find the link in the Follett House Museum area of the library's website, under Multimedia.
Posted by Sandusky Library Archives Research Center at 3:49 PM 1 comment:

Email ThisBlogThis!Share to TwitterShare to FacebookShare to Pinterest
Labels: Books, Sandusky of To-Day

The graphic above is a daguerreotype of an image (possibly a painting) of Mrs. Giffe Babcock Follett, the mother of well known Sanduskians Oran and Foster M. Follett. Oran Follett was in the publishing business, and published the Lincoln-Douglas Debates with his partner Frank Foster. Foster M. Follett was the Erie County Auditor from 1850 to 1852, and 1856-1860. He also was an early Mayor of Sandusky, and worked tirelessly during the cholera epidemic. Mrs. Giffe Babcock Follett’s daguerreotype was a gift to the Sandusky Library Archives Research Center from descendants of Oran and Eliza Follett.
Posted by Sandusky Library Archives Research Center at 11:17 AM No comments:

George Putnam Barker was the son of Jacob A. and Mary (Paterson) Barker, and grandson of former Mayor of Sandusky, Zenas W. Barker. He was born in Sandusky in May of 1852, and was associated with the United States Express Company in Sandusky for over forty years. From 1915 to 1929 Mr. Barker was storekeeper at the Ohio Soldiers’ and Sailors’ Home.

During the Spanish American War, George P. Barker rose to the rank of Major. He began with Company B of the Sixteenth Infantry, and mustered out with the Sixth Infantry. For four months Major Barker held the position of military governor of the district of Santa Clara in Cuba.

On January 24, 1930 George P. Barker died as a result of heart disease. His wife, the former Alice Lyman, had predeceased him in 1925. Funeral services for Major Barker were held on January 27 at Grace Episcopal Church, and burial was at Oakland Cemetery. A military salute was fired at the grave, and taps were played. The honorary pallbearers for Major Barker were Gen. Perry Null, Dr. J.T. Haynes, Edward McCune, A.V. Brown, Roy T. Rogers, and Alva S. Humiston. Active pallbearers were members of the Spanish American War Veterans, including John Bamberl, George Schiller, A.C. Schultz, John Wunder, Thomas Schwank, and Ralph Stockdale. Obituaries for George P. Barker are found in the 1930 Obituary Notebook at Sandusky Library.
Posted by Sandusky Library Archives Research Center at 10:56 AM No comments:

The next Brown Bag Lunch will be held on Wednesday, July 20, from 12:00-1:00 p.m. in the Library Program Room. The topic will be: Sandusky Bookshelf: Sandusky of Today. Join us as we inaugurate our Sandusky Bookshelf Series. In this occasional series, we will share with you books written about Sandusky, primarily during the Nineteenth Century, to promote the growing city. Sandusky of Today was written in 1888 and touts all that the city had to offer in industry, natural resources, transportation, and more. This slender volume preserves a slice of Sandusky in the final quarter of the Nineteenth Century. This program will be presented by Maggie Marconi, Museum Administrator. Registration is requested.
Posted by Sandusky Library Archives Research Center at 9:53 AM No comments:

In the 1940’s and 1950’s, the Sandusky Library sponsored the Reading for Fun Club. Elementary school age children read and reported on ten books during the summer months. The Junior Reading for Fun Club was for first and second graders. Below are some bookmarks and bookplates from past summer reading programs. Martha Luscombe created this bookmark using the linocut print technique.


The Fourth Year Reading for Fun Award bookplate was also a linocut made by Marsha Luscombe.

The Reading for Fun bookmark below features the Sandusky Library’s original Carnegie building. It was created by Helen Zube. 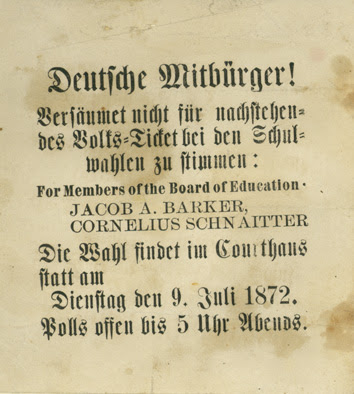 The handbill above was donated to the Sandusky Library Archives Research Center by Dr. Norbert Lange, who also provided the English translation:
German Fellow Citizens!
Do not neglect to vote for the
school candidates on the Volks-Ticket:
For members of the Board of Education:
Jacob A. Barker
Cornelius Schnaitter
The election will be held in the court house on
Tuesday the 9. of  July 1872.
Polls open until 5 o’clock in the evening.
In 1872 there were many German social groups which met in Sandusky, and it is most likely that when they met, this handbill was distributed just prior to the July 1872 election. According to the 1893 Annual Report of the Board of Education of City of Sandusky, Cornelius Schnaitter served on the Board of Education for the Sandusky City Schools from 1872 through 1876, while Jacob A. Barker was on the Board of Education from 1872 through 1878.
Posted by Sandusky Library Archives Research Center at 1:50 PM 2 comments:

Join us in the library program room on Wednesday, July 13 at noon, as Archives Librarian Ron Davidson shares travel stories gleaned from the historical collections of the library. Using travel scrapbooks from the nineteenth- and twentieth centuries, historical photographs, letters, notebooks, and other artifacts, we will observe the recollections of early travelers who called Sandusky their home. Share their experiences of hardships and pleasures, and maybe see some souvenirs, too.
Posted by Sandusky Library Archives Research Center at 8:55 AM No comments: 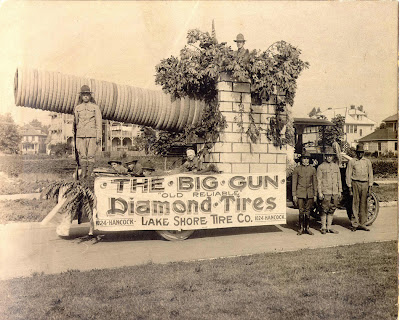 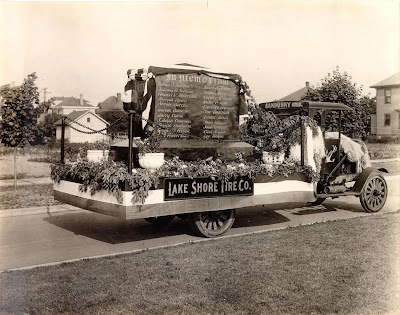 Names of deceased local servicemen from World War I are listed on a tablet in the back of the truck. 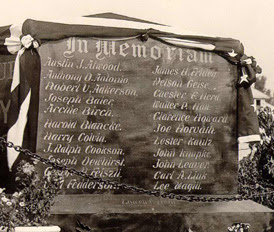 Floral urns, similar to those still found in Washington Park are found in the four corners of the truck bed. An article in the July 5, 1919 issue of the Sandusky Star Journal, reported that the Lake Shore Tire Company’s float was one of the most beautiful floats in the parade.
As the parade passed at West Monroe and Jackson Streets, the band played “Onward Christian Soldiers.” Area men who had served in the war marched directly behind the band. Over 150 soldiers and sailors, along with two Marines, participated in the parade. Following the parade, Ohio Congressman Randolph Walton, gave a speech in front of the Erie County Courthouse. He said, in part, “The boys of Erie County are deserving of all the honors that can be given them. The outstanding characteristics of the American fighter were cheerfulness and unselfishness.”
Posted by Sandusky Library Archives Research Center at 2:04 PM No comments: