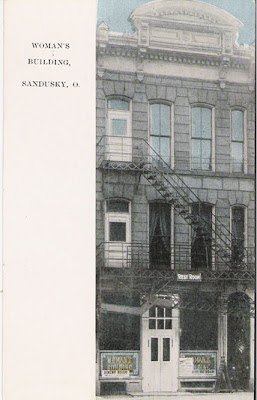 The Women’s Building and Rest Room Association was formed around the turn of the twentieth century to provide a clean, safe place for women and children to go while in Sandusky. The Association also served inexpensive hot meals.
The organization’s charter described their purpose as such: “The purpose for which said corporation is formed is to establish and maintain rooms for the use, entertainment, and instruction of girls and women and their clubs, societies and organizations and for social functions and amusements; to employ teachers and instruct classes of girls and women in cookery, domestic science, sewing, dressmaking, manual t raining, physical culture, arts and crafts, to prepare and serve to the public for pay, refreshments, lunches, meals and banquets, as a means of raising revenue for said purpose; and by lease, purchase or otherwise, to acquire and hold title to real estate… maintain buildings suitable for said purposes and furnish them with proper and suitable furniture, fixtures, fittings and decorations….”
They were first housed on Market Street, opening there in 1908. To raise funds to get the association established, they published a newspaper called the Women’s Endeavor as a fundraiser. In 1912 they purchased a building on Columbus Avenue for $9,500. The new location was declared to be ideal, “within a short distance of the steamboat and railroad passenger landings and this of itself is a decided advantage for the association’s public dining room from which it must continue to draw a larger percent of its revenue…. The two upper stories will give the association ample room for its several industrial classes and domestic science work, while the ground floor with a moderate expenditure, including the installation of a proper kitchen, will give the association adequate and attractive quarters for the restaurant which the association has always needed and for lack of which the women have been greatly hampered in the past.”
In an editorial, the Sandusky Register spoke of the importance of the work of the Association. “The fundamental purpose of all this is to train them [women and girls] to be self-helpful and that is the most important thing after all not alone for the individual but for the community, for people who are self helpful do not become a public charge. They are producers and add to the community’s wealth and to the comfort and happiness of the home.”
The important role that the Women’s Rest Room Association played in the community is evident from its numbers. In 1912, more than 30,889 people used the building. The same year, they taught classes in embroidery, knitting, crocheting, millinery, sewing, and cookery.
The Association was active for a number of years, but by the early 1920s, the membership had dropped dramatically, and only a core group of women kept the club alive. By that time, the classes they had previously provided were no longer needed, as they had been taken up by the city schools. Mrs. C.J. Krupp, the president of the group also noted that “Other ventures of the association for the comfort and welfare of the community have also been taken over and ably handled by others. We feel that the ground is pretty well covered.” In 1921 they decided to sell the building for $20,000.
In 1925, the Rest Room Association started exploring options for the logical best next step. They focused on the Business Girls Club. After months of meetings, the Business Girls Club became an incorporated group known as the Business Women’s Club, and they had agreed to purchase the Farrell home on Wayne Street as their headquarters. At the June 3, 1926 meeting of the Women’s Rest Room Association, a resolution from the Business Women’s Club was read as follows “That on final disposition of the Club the earnings of said Club, are to be invested in good securities, and eventually go back to the cause for which it was intended, namely the activities of women.” On September 14th of that year, they passed a resolution to turn over the assets of the Women’s Building and Rest Room Association to the Business Women’s Club AT the December 21, 1926 meeting the Women’s Building and Rest Room Association met for the purpose of adopting a resolution and taking necessary steps to dissolve the association.
The Business Women’s Club continued on at the Wayne Street location for many years. Over the course of time, however, activities there began to diminish. In 1964, the club lost its non profit status. In 1969, the club sent out a letter to its membership advising them of the club’s annual loss of $3,000 per year, and the plans to discontinue the dining room at the close of the calendar year. The club began to explore options to pay outstanding bills. In 1975, the Business Women’s Club filed papers with the Ohio Secretary of State to officially dissolve the group, thus ending a long, rich Sandusky tradition.
Posted by Sandusky Library Archives Research Center at 1:35 PM