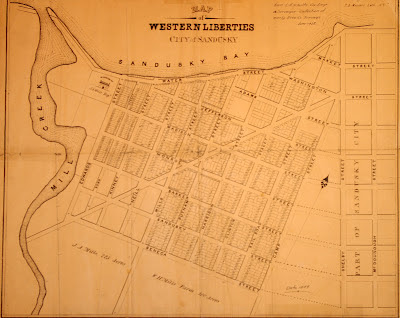 The “Western Liberties” was a section of lots in Erie County west of and adjoining the Sandusky tract (the original section of the city, what is now the downtown area), created in 1836. Mills Street was the western boundary of the Western Liberties and Camp Street was the eastern boundary. The Mad River and Lake Railroad’s engine house and shops were located in the northern section of the Western Liberties. It is not clear why this region was called the Western Liberties, but a possibility is that it was adapted from the name used by William Penn for land outside of the city of Philadelphia. (Certain tracts of land were called "the liberty land or free lots," because these lots were given free of charge to first purchasers of land in the colony. Whether this policy was followed in the Sandusky Liberties is unknown.) At the time of its creation, the Western Liberties were at the western edge of the city.
Early settlers in this portion of the city were predominantly immigrants, particularly Germans and Irish. The lots and houses were generally smaller than in other parts of the city, and thus more likely to attract those making a new beginning in a new land. An 1855 article in the Daily Commercial Register described the region as a "busy, thriving town, composed chiefly of a foreign population," and predicted continued growth from German and Irish immigration.

The first Catholic Church in Sandusky, Holy Angels Church, was established in the Western Liberties, drawing many of its parishioners from this immigrant population. Father Joseph Machebeuf (who was the inspiration for the title character in the Willa Cather novel, Death Comes for the Archbishop) was the priest when the first church building was completed in 1845. The Catholic cemeteries of Sandusky, at Mills and Seneca Streets, are near the southern boundary of the Western Liberties.

During the cholera epidemic of 1849, the August 3, 1849 issue of the Daily Sanduskian reported that a temporary orphan asylum was established in a frame cottage in the Western Liberties, near the Catholic Church. Contributions of money, bedding, and provisions were accepted by John M. Brown, F.M. Follett, F.T. Barney, Rev. Goesbriard, and David Souter.

By the 1890s August and Jacob Kuebeler had established the Kuebeler Brewing Company on Tiffin Avenue. Though the brewery is no longer in existence, the former home of August Kuebeler is still standing at 1319 Tiffin Avenue, located directly across the street from the spot where the brewery once stood. (A similar house, owned by his brother Jacob Kuebeler, was across the street.) 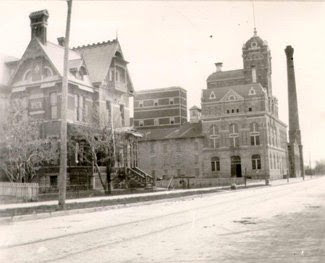 Two historical atlases of Erie County are housed in the Archives Research Center of the Sandusky Library, dating from 1874 and 1896. By browsing through these atlases, you can see how drastically Erie County has changed though time. Churches, businesses, government offices, and information about early area residents are all documented in the Erie County historical atlases.
Posted by Sandusky Library Archives Research Center at 7:00 PM