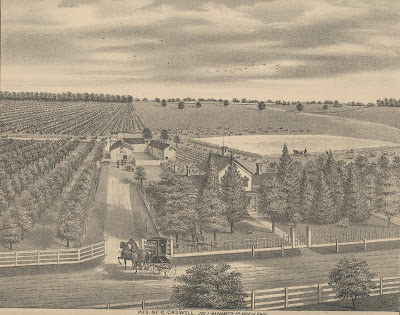 Calvin Caswell was married twice, first to Louisa Ellison, and then to Serena Jackson Caswell. (After Calvin’s first wife died, he married his brother Daniel’s wife, who had become a widow in 1855.)

On February 7, 1879, Mr. and Mrs. Calvin Caswell hosted a dinner for the members of the Erie County Agricultural Society. A napkin, which was a gift to the Follett House Museum, reads: “Welcome All, Grand Circuit of Feasting and Not Fasting.” 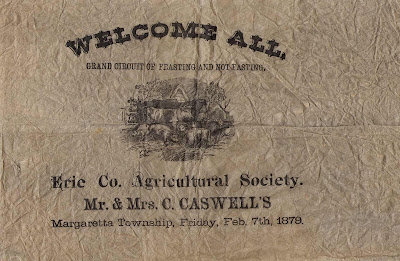 Calvin Caswell died in May of 1907. The Sandusky Register featured a lengthy obituary, which stated in part: “In the presence of hundreds of kindred and friends, farmers and citizens from the varied walks of business and professional life, the funeral of the late Calvin Caswell was held at the family home in Margaretta Saturday afternoon. The body of the deceased reposed in a magnificent casket of the McKinley pattern, surrounded by the rarest of flowers, and rising back and above a large floral crown, a Gates Ajar several feet in height, while at the head rested a pillow of carnations.” Calvin Caswell was buried in the family plot at Castalia Cemetery. A large sculpture was erected by Mr. Caswell several years before his death. A biographical sketch of Calvin Caswell is found in Patty Pascoe’s book, Elected to Serve Erie County, Ohio, available at Sandusky Library.

Posted by Sandusky Library Archives Research Center at 9:52 AM

Hi Dorene,
Thank you so much for visiting my blog. I hope to someday add states of the US to my Months of Edible Celebrations. I am saving your wonderful link for future posts.

Thanks again, it was a pleasure visiting...

You might like my other blog, Tasteful Inventions, where I explored an inventor from Ohio; Frederick McKinley Jones and Refrigeration