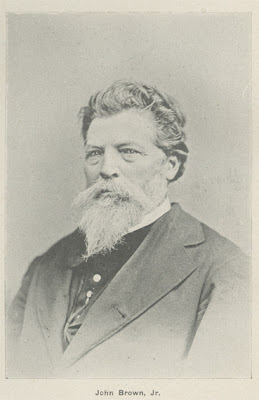 Born in Hudson, Ohio in 1821, John Brown, Jr. was the oldest child of abolitionist John Brown and his first wife Diantha Lusk. During the Civil War, John Brown, Jr. served as Captain of Co. K of the Seventh Kansas Cavalry. In 1862 John Brown Jr. moved to Put-in-Bay, where he lived for the rest of his life, a well respected citizen. The 1880 Census lists John Brown, Jr. as a grape grower, living in Put-in-Bay with his wife Wealthy and children John and Edith. Edith would later marry Thomas B. Alexander, an actor and Mayor of Put-in-Bay for many years.

John Brown, Jr. died on May 2, 1895. Funeral services were held under the auspices of Science Lodge, F. and A.M. Masonic ritual was adhered to throughout the entire service. Judge E. M. Colver gave the eulogy. Judge Colver paid a glowing tribute to Mr. Brown, stating that John Brown, Jr.’s “name was connected with the greatest pages of America’s history.” The judge continued, “He was a disciple of truth and his life exemplified that great truism, ‘an honest man is the noblest work of God’ ”

Sanduskian James M. French paid tribute to John Brown, Jr. on behalf of the people of color of Ohio. He spoke of the sacrificial spirit of the Brown family. “The lesson to be carried away is that we should have a renewed inspiration for progress and advancement in our civil and educational lives, to show our appreciation for what was done in our behalf.”

Lydia J. Ryall included a sketch of the life of John Brown, Jr. in her 1913 book Sketches and Stories of the Lake Erie Islands, available in the Archives Research Center of the Sandusky Library. An earlier edition of Ms. Ryall’s book, under the pen name Theresa Thorndale is found at Google Books. The papers of John Brown, Jr., including many letters, are found at the Rutherford B. Hayes Presidential Center. The Genealogical Project of the Lake Erie Islands Historical Society features a page on its website dedicated to the Brown Family.
Posted by Sandusky Library Archives Research Center at 3:44 PM

If you are planning to vist Put-in-Bay try the Put-in-Bay Resort http://www.putinbayresort.com

This was an interesting fact