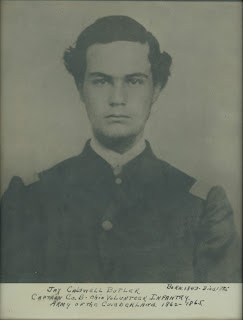 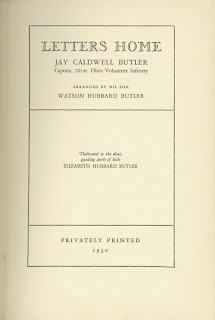 Near Springfield, Kentucky on Oct. 7, 1826 he wrote to his parents about marching with his friends Charles Dennis, Alexander Hosmer, (called Alick in Jay’s letters) and his brother John. Jay wrote about the Confederates taking 25 prisoners of the 3rd Ohio Cavalry and killing six horses belonging to Union soldiers. He also told his parents that he had seen Dr. McMeens, a Sandusky physician who would die during the war.

Following the Battle of Perrysville, Jay saw 150 dead and wounded soldiers. He wrote to his parents, “Don’t be uneasy about us. We have good faith in the cause, and if anything should happen you will know it as soon as possible. Excuse the shortness and poor writing, as it is done by campfire. Give my love to all. All send love and are first rate and of good cheer. I could write a great deal more but have a chance to start this on its way. Good-by.”

While traveling from Kentucky to Tennessee on Nov. 9, 1862, Jay wrote: “This is a dreary, desolate, barren and deserted looking country. All the small towns that we have passed through have been deserted…The houses and stores are either closed or smashed to pieces. Everything is going to utter destruction. Just think of two such armies passing through Ohio.” In the same letter he tells of hearing about the death of Dr. McMeens, hoping the report was not true, but of course it was true.

On December 7, 1862, near Nashville, Tennessee, Jay wrote to his parents that the regiment had not had devotions for six or eight weeks, because the Chaplain was tending to the sick and wounded. The water in is tent was frozen solid, and even his hair was frozen, and he was unable to comb it. He had eaten a dish of mush and molasses with his friend Alick that day. He wrote to his parents, mentioning his three younger brothers, “Give Frankie a kiss and tell him I would like to see him as badly as he would me, also George and Charley.” In January 1863 Jay wrote to his mother, telling her about Sergeant Simon Huntington of Kelleys Island having to have his leg amputated.

In Winchester, Tennessee, in July of 1863, Jay and Alick heard the sounds of a piano, and they went into the house of a Tennessee family. Jay wrote, "…we were attracted by the sound of a piano and thought there would be no more harm in going into the house than standing outside listening, so we went in – and found one of very good appearance seated at the piano – and her Mother was sewing in her easy rocking chair. They greeted us very cordially and treated us exceedingly kind. We excused our abruptness etc. When another young made her appearance, they played and sang for us. Although they acknowledged themselves secesh (secessionist) yet they would not converse nor sing any southern songs for us. Thus we spent a very pleasant hour indeed.”

According to the Official War Record of Jay Caldwell Butler, during the Battle of Nashville, on December 16, 1864, Jay was severely wounded, and he lay of the field for several days before receiving medical attention. He came home for a time following his injury, but Jay never truly recovered completely. Following the war, Jay worked with his uncle, John M. Boalt, in the manufacturing of sashes, doors, and blinds. In 1873, Jay married Elizabeth Hubbard, and they had two children, Elizabeth and Watson Hubbard Butler. Jay Caldwell Butler died on July 13, 1885. Over sixty of Jay’s employees filed by the casket at the time of his burial. An obituary of Jay Caldwell Butler is found in the 1888 Firelands Pioneer. The wife and daughter of Jay Caldwell Butler are pictured at the Sandusky History website.

By reading the letters home from Jay Caldwell Butler (and other men, including Horace Harper Bill) one gets a sense of the actual experiences of a young Civil War soldier. Jay saw the horrors of war, but he also grew close to his comrades, learned how to be a leader, and he strengthened family bonds through his letters to and from home.
Posted by Sandusky Library Archives Research Center at 10:29 AM

Love reading old letters and diaries. Such great glimpses into our past. Thanks for posting.