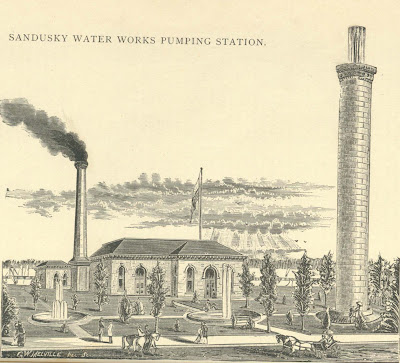 An ordinance for the establishment and construction of a Water Works for the City of Sandusky was passed January 11, 1875. In the Sandusky Library Archives Research Center, the Annual Reports of the Water Works for the City of Sandusky have been bound into a large volume, covering the years 1875-1900. The Water Works was considered one of the major projects of the city in the latter half of the nineteenth century. Contaminated water was one a major factor in the outbreak of cholera in 1849. In 1876 the Water Works began filtering and pumping water to most homes and business in the city of Sandusky. Hewson L. Peeke wrote in his 1916 book A Standard History of Erie County, that the water works plant had a capacity of 17,000,000 gallons daily, and service was provided to every part of the city of Sandusky as well as to the Soldiers’ and Sailors’ Home and the Erie County Infirmary, which were outside the city limits.

Pictured below is a stereograph image, created by A. C. Platt, of the standpipe under construction, on Meigs Street about 1875. 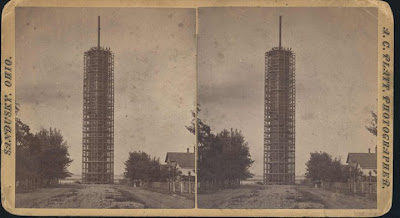 In the First Annual Report of the Trustees of the Sandusky Water Works, published in 1877, appears a breakdown of the contracts awarded for the building of the various components of the water works system. Mr. Vincent Kerber was awarded the contract for building the smoke stack. The annual report stated that Mr. Kerber “exhibited great care and perfection of workmanship in its construction.”In the report of the chief engineer from the First Annual Report, the exact dimensions and length of pipe distribution throughout Sandusky was itemized. Fire hydrant locations as well as the names of the manufacturers of the hydrants were listed on pages 35 through 37. 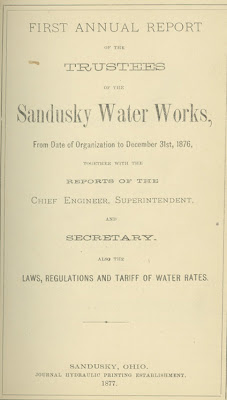 Included in the annual reports are financial statements, balance sheets, and a listing of expenses paid out through the previous year. For example, in the Sixth Annual Report, from 1881, I.F. Mack was paid $30.85 for blank books, C.M. Thorpe was paid $124.47 for coal, Louis Zistel was paid $5.30 for the use of his boat, and mats and a duster were purchased from E.H. and R.M. Wilcox for a total of $3.50. In the combined 1894-1895 Annual Reports, William Thom was paid $9.00 for horse shoeing services, and dynamite was purchased from J. J. Butts for $248.08. It is interesting to see the names of local businesses with which the city of Sandusky contracted. 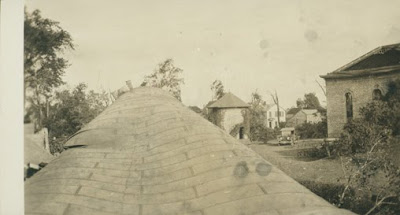 The standpipe of the Water Works was seriously damaged during the 1924 tornado. By the fall of 1940, a new water works plant was built at Big Island, located at the eastern end of First Street. It was built during the depression with the aid of a federal grant.
Posted by Sandusky Library Archives Research Center at 11:12 AM

Our next door neighbor, at 1130 Fifth Street, was Mr. Thomas Swank, his wife, and his son Paul. When I was growing up (1940's) Mr. Swank worked at the water works, perhaps originally at the original one on Meigs Street, but certainly at the new water works plant on Big Island. Mr Swank had served aboard a US Navy ship during the Spanish-American War. He used to tell us that one day, while the ship was in port, he and a group of other seamen from his ship, played softball in one of the cuts of the Panama Canal, then lying dormant and dry during the years after the French stopped construction (1890's) and the US took over the project and completed it (1904-1914). He used to also quote the old humourusly disparinging [spelling??] saying that "In the old days, ships were wooden and the sailors were like steel. But now (1940's) the ships are steel and the sailors are like wooden men."