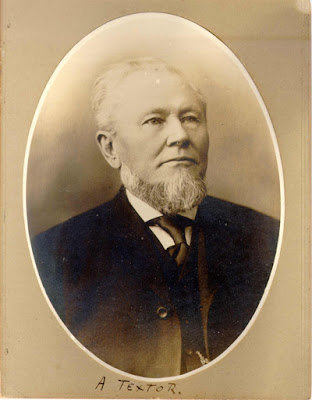 Albert Textor was a pioneer wine manufacturer in Sandusky. According to an article in the January 23, 1920 issue of the Sandusky Register, Albert Textor came to the United States from Germany in 1849. He and his brothers William and Charles first went to Sandusky, but due to the cholera epidemic, they settled on a farm in Marblehead in Ottawa County. After about a year, Albert moved to Sandusky. On page 417 of History of Erie County, Ohio, edited by Lewis Cass Aldrich, we read that Albert Textor manufactured ten to twelve varieties of dry and sweet wines, which were shipped to all parts of the United States east of Kansas.
In 1860 Albert Textor opened a jewelry store. A listing in the 1882 Sandusky City Directory states that A. Textor was a dealer in jewelry, watches, clocks, silverware, spectacles and eye glasses at his store located at 211 Columbus Avenue, opposite the Sloane House. Later, Albert Textor’s son Alexander took over the business. Following the death of Alexander Textor in 1927, Albert Textor’s grandson Herbert M. Textor became owner and operator of the Textor Jewelry store. Pictured below are the owner and employees of the A. Textor store in Sandusky about 1890. Most likely Albert Textor is the gentleman on the far right of the photograph. 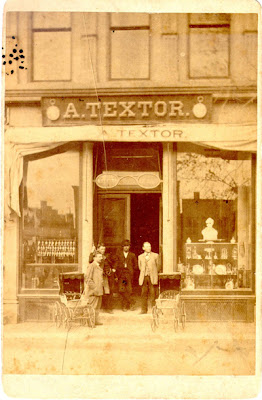 Posted by Sandusky Library Archives Research Center at 10:15 AM