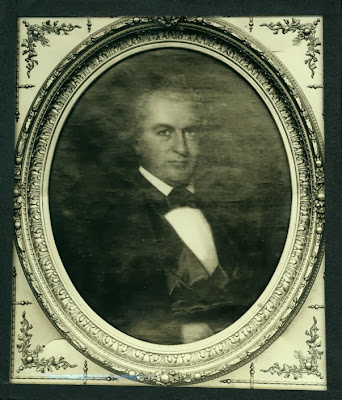 David Campbell was born on May 8, 1794 in Cherry Valley, New York. He moved to Sandusky, Ohio in 1821, and in May of 1822 he founded the Sandusky Clarion, the first newspaper of the Firelands area. Originally Adonijah Champlin was to have been David Campbell’s partner, but because he was detained in New York, he never joined Mr. Campbell in the venture. 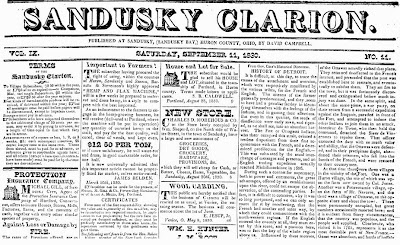 When the Clarion was  first published, Sandusky had a population of about three hundred, and there were only about forty buildings in the town. A portion of a letter from Eleutheros Cooke to David Campbell, reprinted in the Firelands Pioneer, said about the Clarion, in part: “…the publication of your paper has been hailed as an event conducive to the general advancement of knowledge and auspicious to the prosperity of the country.” In 1816, Campbell married Mary Jones Todd. They were the parents of three sons. After the death of Mary Jones Todd Campbell, he married Matilda West, the sister of W.T. and A.K. West. In 1828 he was elected a member of the Ohio Senate, where he served for two years. David Campbell labored earnestly in his twenty nine years at the Sandusky Clarion. In May of 1841, Mr. Campbell retired, and Earl Bill and Clark Waggoner took over the newspaper.


David Campbell died at his home in Sandusky on July 28, 1861, at the age of 68, after having been in poor health for the past two years. A lengthy obituary appeared in the Sandusky Register of July 29, 1861. The concluding paragraph stated about Mr. Campbell, “In private life he was scrupulously just; in his domestic and social relations, affectionate and sincere; in his daily intercourse, always amiable and unassuming; in his whole life a fit model for the imitation of the just, and in death, lamented and cherished with affection by all who knew him well.” He was buried in Block 24 of Oakland Cemetery. On his tombstone is the inscription, “An honest man.”