Who Were Herb and Myers? 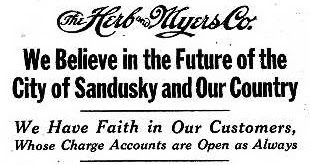 Mr. Michael R. Herb and Frank H. Myers were partners in the Herb and Myers Company for over twenty-five years in downtown Sandusky. At one time Herb and Myers was one of the largest department stores in northwest Ohio. An article in the Sandusky Register of February 22, 1900 stated that the business had its formal opening on February 21, 1900. The first location was in the Mahala Block on Washington Row. By 1910 the company had purchased the “Big Store” on East Market Street, which had previously been owned by C.L. Engels. Both Mr. Herb and Mr. Myers had been previously employed at the Big Store. Below is an image of the Herb and Myers store when it was on East Market Street, in the former Big Store location. 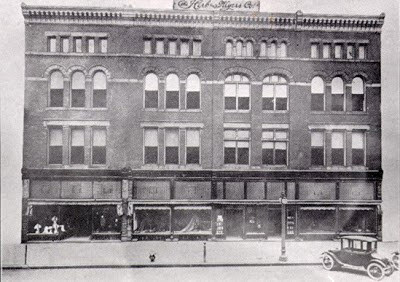 Michael R. Herb was born on July 26, 1870, to Mr. and Mrs. Michael Herb, both natives of Baden, Germany. Below is a picture of Michael R. Herb in 1924. The elder Mr. Herb was a Civil War veteran, and he worked as a stone mason in Sandusky, Ohio for many years. 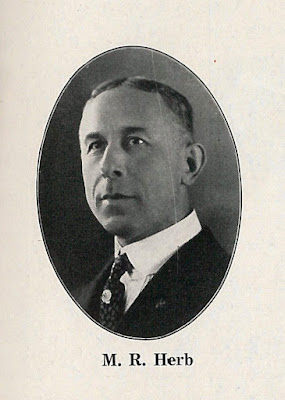 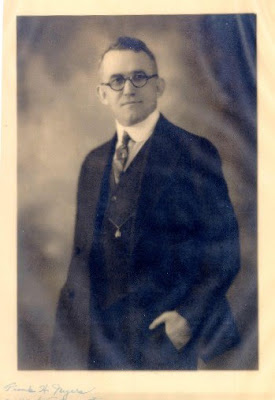 Throughout their long years of being in business together, Mr. Herb and Mr. Myers sold thousands of dollars of merchandise to residents in the greater Sandusky area. They sponsored bowling and baseball teams. Herb and Myers advertised heavily in local newspapers. 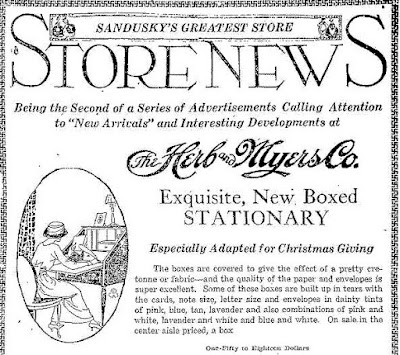 During the First World War, the Herb and Myers Company contributed to the Erie County Liberty Loan Committee, and printed a patriotic songbook for local residents.

An article in the May 31, 1933 Sandusky Star Journal reported that M.R. Herb had bought out Mr. Myers’ stock in the company. Following a big liquidation sale, the store formerly known as Herb and Myers changed its name to the M.R. Herb Company. This notice appeared in the Sandusky Register of July 6, 1933. 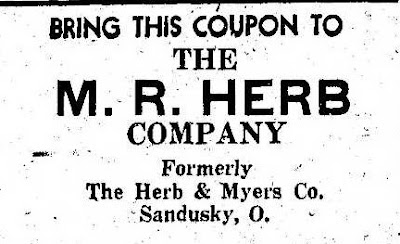 The M.R. Herb Company continued in business until 1939, when it was destroyed by a massive fire in downtown Sandusky. Mr. Michael R. Herb died on November 6, 1962, at the age of 92. He was buried in Calvary Cemetery in Sandusky, Ohio. Frank H. Myers founded the Sandusky Folding Box Company in 1931, with James Plain, and retired as that company’s president in 1955.  Mr. Myers passed away on February 22, 1965, at the age of 89. He was buried in Section L of Sandusky’s Oakland Cemetery. Both Mr. Herb and Mr. Myers are remembered as being vital members of the community. Many of our grandparents and great grandparents probably shopped at the Herb and Myers store.
Posted by Sandusky Library Archives Research Center at 9:00 AM

Our parents, indeed, shopped at Herb and Myers for many years, until the tragic fire that burned down that store and a third of of Sandusky's retail core. Later, in 1953 or 54, I applied for a summer job at Mr. Meyer's other company, Sandusky Folding Box Company, then located on N. Depot Street at Lawrence St. I didn't get the job, but I harbored no ill feelings toward Mr. Myers.