Commercial Building at the Southeast Corner of Market and Wayne Streets 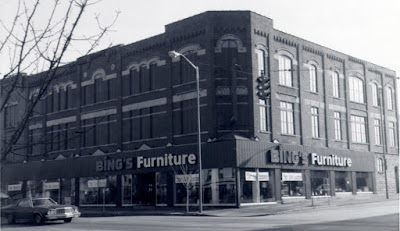 This picture of the Bing’s Furniture Store at 202 East Market Street was taken by Helen Hansen in 1983. At that time the building recently had a face-lift which included the addition of shutters over the upper level windows, and sandblasting of the exterior brick. This commercial building was built by Sandusky contractor George W. Doerzbach in the Spring of 1894. It originally was a one hundred foot square brick structure. An article in the Sandusky Register of March 30, 1894 reported that the foundations of the building were blasted out of the stone bedrock. The stone that was blasted was then used in the basement and the first floor. Klotz and Kromer provided the engines that drove the elevator. A tin roof was put in by J. Mertz and Son, and the interior painting was done by Holland and Tebbutt. Total cost was $40,000 (about $1.2 million today).

Here is an illustration from the Sandusky Register which depicts the building as it originally appeared:

The basement was leased to Engels and Krudwig, who pressed 400 tons of grapes in the fall of 1893, while the construction was still ongoing. In April of 1894, the J.L. Hudson Store opened at this location, after having previously done business in the Hubbard Block. The J.L. Hudson Company, which had its headquarters in Detroit, claimed that their store was the largest and finest in Erie County. 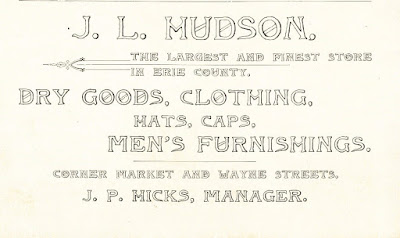 The April 9, 1894 issue of the Sandusky Register reported that at Hudson's grand opening, Professor Theodore Taubert’s orchestra provided musical entertainment, and potted plants and ferns decorated the store. Mr. J.L. Hudson himself arrived from Detroit to be present at the opening of his store’s newest location. The store sold men’s clothing and hats, women’s apparel and dry goods. J.P. Hicks was the manager. Mr. Hudson died on July 5, 1912, and soon after, in the summer of 1913, articles in the Sandusky Register announced that the Sandusky store would soon be closing.

For a short time, John J. Healy operated a retail store at the site of the former J.L. Hudson store. Jacob H. Herman sold furniture and carpets here for many years, until the Bing Furniture moved in to this site in the 1940s. Since 1987, Value City Furniture has been in business at the southeast corner of Market and Wayne Streets in Sandusky.

If that bldg was at the corner of Market and Wayne, it would have been 202 East Market, not West Market.

You are correct. Thanks for noticing.