Pictured below, in their fancy hats, are the wife and daughter of Jay C. Butler, a prominent Sandusky businessman. In the 1880’s Jay C. Butler and his brother George had a business at the southwest corner of Water and Decatur Streets. They manufactured doors, sashes, blinds, and other building materials and office furniture. Jay C. Butler had served as a Lieutenant in Co. B of the 101st Ohio Volunteer Infantry in the Civil War. He died in 1885, when he was only forty years of age. 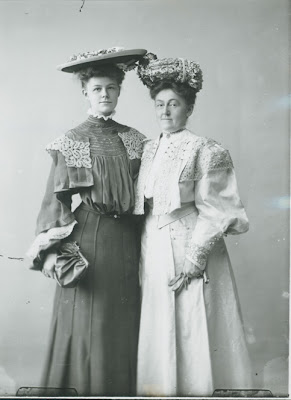 Jay C. Butler’s wife was Elizabeth Hubbard, the daughter of Mr. and Mrs. Watson Hubbard. (She is on the right in the photograph above.) Elizabeth Hubbard Butler was born in Michigan on April 23, 1852. She resided at 429 Wayne Street, and lived to be 91 years old, passing away in 1943. Mr. and Mrs. Butler’s daughter, also named Elizabeth, (on the left in the photo) was born in 1884. Elizabeth Butler married Frederick Harten. In 1932, Fred Harten was the president of the Harten-Brooks Motor Company, at 424 Huron Avenue in Sandusky. In the 1930 Census, Mr. and Mrs. Fred Harten had two adopted children. Also living in the household were a nurse, a cook, a butler, and a chauffeur.

It appears that Elizabeth and Fred Harten may have divorced, as they are not buried in the same location. At Oakland Cemetery, Mr. and Mrs. Jay Butler are buried in Block 61, along with their daughter Elizabeth Butler Harten.

In 1930, Watson Hubbard Butler, the son of Jay C. Butler published a book of his father’s letters written during the Civil War. You can find the book Letters Home, by Jay Caldwell Butler, at the library of the R. B. Hayes Presidential Center. An obituary for Jay Caldwell Butler was carried in the 1888 issue of the Firelands Pioneer.
Posted by Sandusky Library Archives Research Center at 9:03 AM

Your blog is wonderful as well!! Being a genealogist, I LOVE the old photos and history you have posted. I hope you don't mind but I am going to add you to my favorite blog list.
Have a wonderful day!
Laura

Thank you for the link to this wonderful, historical blog. Well done!
Debbie

I was particularly looking at your ladies in their fashionable attire. I noticed you didn't date the photo. A wise choice. I was researching a needed around 1870 - 1880- and on. What a difference a year can make. Also difference in womens dress between pioneers between the american east including the small towns.
You sure have a lot of info genealogists might be looking for in their research.