The Acquittal, presented by the Singara Grotto 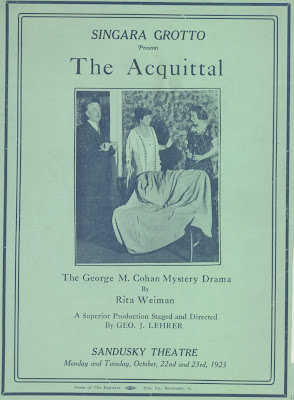 On October 22 and 23, 1923 the Singara Grotto presented The Acquittal at the Sandusky Theatre. The George M. Cohan Mystery Drama, written by Rita Weiman, was produced, staged and directed locally by George J. Lehrer. An article in the October 16, 1923 issue of the Sandusky Register reported that in the original Broadway production of The Acquittal George J. Lane was in the cast, under the stage name of Norman Lane.

The character of Madeline Winthrop was played by Maybelle Hinkey. The newspaper article stated that Miss Hinkey was “fully capable of playing this part”….which called for “wonderful repression of the emotions and great power to sustain dramatic situations.” In the play the character of Mr. Winthrop, played by Sam Cunningham was just acquitted of murder. Beryl Starr played the role of Mr. Winthrop’s secretary. Due to popular demand the performance played again on Thursday evening, so more area residents could see this popular play. 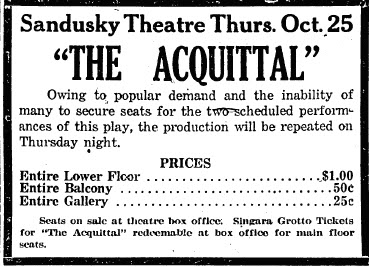 Some of the advertisements in the play’s program were interesting. The Sandusky Butter & Egg Company recommended that you could protect your health by drinking Budweiser. The C.S. Garretson Lumber Company featured an ad that said “We would like to C-U-B-A customer of ours.” The letters C-U-B-A represented the phrase see you be a. Hoffman Motor Sales sold Hupmobile vehicles at 801 Hancock Street.
Posted by Sandusky Library Archives Research Center at 9:07 AM

My dad had a 1937 Huppmobile, bought in the mid-1940's when used cars were in high demand because production for war materiel in WWII precluded making of new cars. Ours was most likely the last Hupp in town; it ran until the early 1950's. Our Hupp was bought from Smith Motors, the Buick dealer on W. Washington St. A neighbor, Frank Link (Sr.), was the manager at Smith Motors.