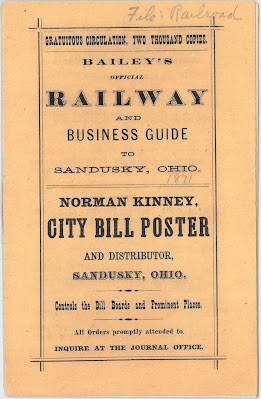 In 1871, two thousand free copies of Bailey’s Official Railway and Business Guide to were distributed by the Sandusky Journal Book and Job Printing Office, operated by A.D. and J.C. Kinney. Timetables for three railroads were included in the small publication.

The Lake Erie Division of the Baltimore and Oho Railroad carried passengers, as well as freight and mail: 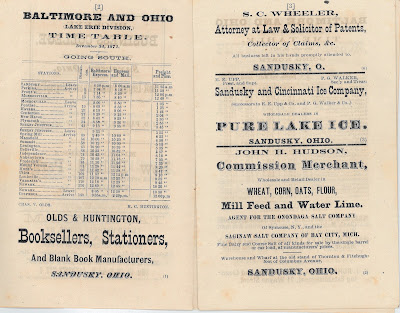 The Lake Shore & Michigan Southern Railroad had a northern and a southern line in operation in in 1871. 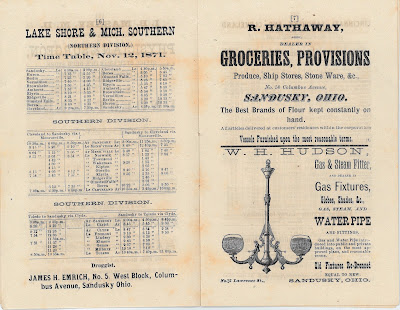 The , and Cleveland Railroad also had lines going both north and south. 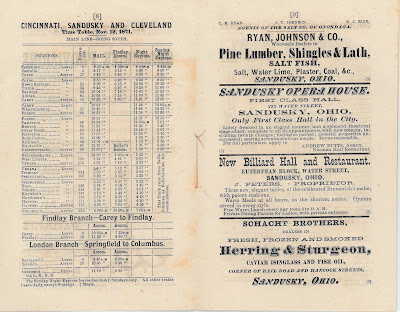 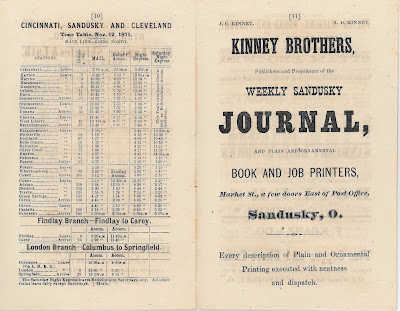 The local advertisements are indicative of the significant businesses in in the 1870s, which included the ice industry, fishing, lumber and lime industries, and a variety of professional services and retail stores. On page 1 of Bailey’s Guide, Dr. J. Castello claimed he could cure patients with tape-worms in three hours. His office was located at in downtown . Several hotels and restaurants had advertisements in the Guide, hoping to attract the many passengers who traveled to by rail.

It would be interesting to know where the passenger stations were for the various rail lines that served Sandusky. I recall that in the 1950's there was a station (no longer used but still standing) on Warren St at Adams (or East Jefferson?). And, where was the terminus for the inter-urban lines (Lake Shore Electric) and the railroad that used to run down Hancock Street.