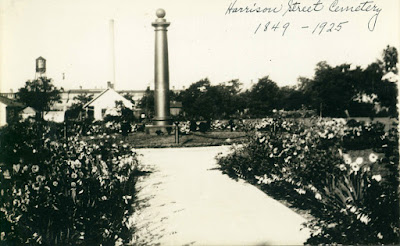 Have you ever wondered why there are only three headstones in the Cholera Cemetery? It has been something that has bothered me since my first visit to that cemetery. In preparation for an upcoming program, I decided to dig into this question, and the real answer was strange and just raised more questions. Just as a refresher, the largest outbreak of cholera here in Sandusky was 1849. All of those who died, 382 people, were buried in what is now called the cholera cemetery. This cemetery did exist before the outbreak, but after the cholera epidemic it was mainly thought of as the cholera cemetery. Shortly after the outbreak was over, the cemetery was abandoned, and Oakland Cemetery became the new city cemetery. Once Oakland Cemetery was opened, the cholera cemetery fell into disrepair and was not maintained.

Now, fast-forward to December of 1893. The Sandusky Register runs an article about the Cholera Cemetery. It states that the headstones are stacked in the corners of the cemetery and the cemetery itself has been plowed for planting crops, and pigs may have been butchered in one corner. This caused an uproar in the community. The Sandusky City Council formed a committee to investigate what happened. In less than a month this special committee reports to the City Council. They find that the head of the Cemetery Committee, Voltaire Scott, paid a Peter Cann to move all the headstones from the Cholera Cemetery to Oakland Cemetery. Cann was paid $25.00 to move the headstones (about $733 today). It seems that Scott asked each member of the Cemetery Committee if they would agree to having the headstones moved to Oakland Cemetery. While each member of the committee did agree to this, there was never a formal vote at either a Cemetery Committee Meeting or a City Council meeting. It also seems that Scott never checked to see if the headstones were moved. This resulted in the stacked headstones as described in the Register article. Scott, after only consulting with one committee member, leased out the land to be farmed by a local farmer. It is interesting to note that Scott was invited to be interviewed as part of the special committee’s investigation to this but decided not to show up. 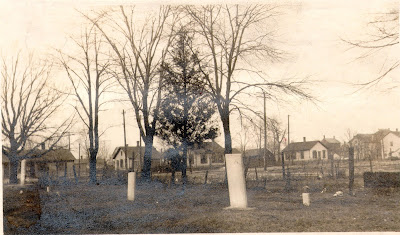 Once all of this comes out, the City Council decides to act! First, they hold a vote that the headstones should be replaced in the cemetery at the expense of Voltaire Scott. This vote fails by a small margin. There is never another vote to move the headstones back to the Cholera Cemetery. Next, a motion is made to impeach Scott since all his actions were done without authority by the City Council and made those acts illegal. This motion is tabled to be brought up another time but as far as my research goes, Scott was never impeached or punished for his actions in anyway. Finally, the City Council votes to build a fence around the cemetery and put up a monument to honor those who died during the first cholera outbreak. This project will be funded by selling off land that is technically part of the Cholera Cemetery. I can find no record of the city ever selling land that was connected to the cemetery. An iron fence was built sometime before 1924 but I was unable to find out when that fence was built. The current monument in the cemetery was built in 1924 and funded by private donations. 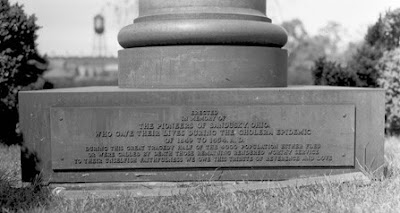 Of course, none of these answers the question where are the headstones from the cemetery? The short answer is, who knows! I was able to track down about a dozen of the headstones that are now in Oakland Cemetery. The rest are, unfortunately, lost to history. There may be something in the old legend that they were broken up and used in paving projects around town. Sandusky was doing some major road work in 1894 and those headstones would make good gravel. It also raises the question, where did the three headstones that are currently in the Cholera Cemetery come from. Are they originals that made their way back into the cemetery or were they put there later? If they are the original, how did they get back in the cemetery? If put in later, then who put them there? As I said in the beginning, the story of the missing headstones is strange and raises many more questions that will probably never be answered.