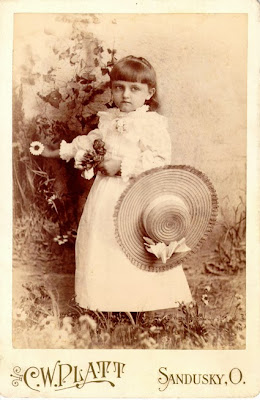 Louise Rinkleff is pictured on a cabinet card created by Sandusky photographer C.W. Platt about 1890. Louise was born in 1887 to George and Louisa (Taubert) Rinkleff. When Louise Rinkleff was just a small child, her mother died. An article in the June 19, 1923 issue of the Sandusky Star Journal stated that Louise spent many happy hours at her maternal grandparents’ home when she was a youngster. In the 1910 U.S. Census, Louise Rinkleff was aged 23, and she still resided with her maternal grandmother, Kate Taubert, in Sandusky. In the 1910 Sandusky City Directory, Louise Rinkleff’s occupation was listed as music teacher. Several newspaper articles through the years reported Louise Rinkleff as providing musical entertainment for church services, dances, and other community events. Her future husband, Frank Curtis, was also a popular local musician. In June of 1923, Louise Rinkleff married Frank Curtis. Both Mr. and Mrs. Curtis provided musical entertainment at the graduation ceremony of the Providencde Hospital School of Nursing in June of 1928. Mrs. Louise Rinkleff Curtis passed away on March 3, 1962 at the age of 75. She was survived by a half brother, and several nieces and nephews.

By looking at vital records, census records, and newspaper accounts about Louise, we were able to glean a few more details about the little girl in this lovely cabinet card.
Posted by Sandusky Library Archives Research Center at 9:27 AM