Who Are the Men in the Under the Baton Banner?

You may be wondering about the names of the men featured in the picture of Ackley’s Band, which appears on the promotional flyers related to the documentary: 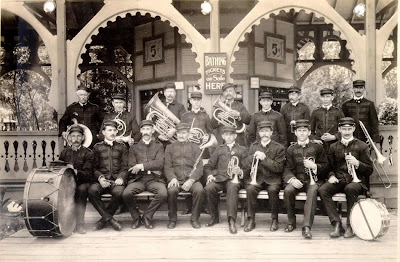 This photograph of Ackley’s Band was taken in the early 1900s. From left to right in the back row are: Ed Senne, John Bauman, M. McAdams, A. Becker, William Hauser, J. Thomas, F. Ortman, and F.W. Bauer. In the front row are: N. Bergmoser, , W. Scott, J. Samsel, F. Bauman, George Godfrey, C. Schaufelberger, and E.B. Ackley.  We know more details about some of the band members than others. Ed Senne played in several local musical groups, including the Great Western Band, Dials Concert Orchestra, and in the orchestra of the Lakeside Association, besides playing in Ackley’s Band. William Hauser, an uncle of Dr. Norbert Lange, also played in several bands through the years, and survived the tornado of 1924; he was inside his home, which was seriously damaged, but he was not injured. There were three members of the Bauman family in Ackley’s Band. was in the plumbing business for over thirty years, and he also operated the Center Hotel. F.W. Bauer went on to serve as Erie County Auditor, and he was instrumental in the founding of , now known as .

George Godfrey conducted a series of free concerts at the Big Store in the spring of 1902.  Mr. Godfrey’s musical composition entitled Sandusky’s Big Store March and Two-Step was published by the C.L. Engels Company in Sandusky, Ohio. 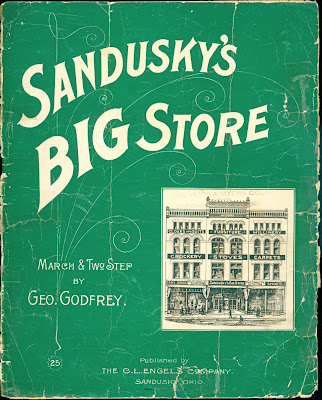 E.B. Ackley was well known as a band leader and musician. 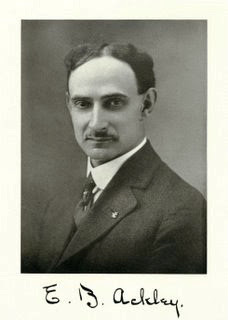 He also published postcards, operated a billiards parlor, was director of music at Cedar Point and served as the instructor of the Sandusky Band and Orchestra. He wrote the Cedar Point March in 1902, the first piece of music dedicated to the resort. Ackley’s Band contributed greatly to the cultural heritage of Cedar Point and . Many of our grandparents and great grandparents had the pleasure of hearing them play, when live music was a significant form of entertainment, before radio and television brought music to the masses.
Posted by Sandusky Library Archives Research Center at 8:30 AM