Continuing the series of lunchtime historical programs at the library, Follett House Museum curator Maggie Marconi will present a talk on the roles many Sanduskians played in helping fugitive slaves reach freedom. The presentation will be in the library program room at noon on Wednesday February 7.

Ohio was a major transit point for freedom-seekers as they fled from the slave lands of the south to the free territories in Canada and the northern United States. Of course, due to the nature of the activity, there is little documentary history of the Underground Railroad, but the memories of participants were frequently recorded -- most notably by Professor Wilbur H. Siebert of the Ohio State University, author of the classic book, The Underground Railroad From Slavery to Freedom (in the Sandusky Library at 326 SI).

Come to the program on Wednesday afternoon to learn more about Sandusky's contribution to freedom.
Posted by Sandusky Library Archives Research Center at 2:20 PM No comments:

On Saturday, January 27, at 2:00 p.m. in the Library Program Room we will have a "hands-on" presentation on identifying and preserving your historical documents. Using examples from the Library's archival collections, we will show you how to identify your documents - what they are, what they are made of, and how old they might be - and offer tips on how to care for these items, so you can preserve your history for future generations. The program will include a brief overview of formats and preservation techniques, with tips on care for specific items, and where to go for supplies and more information.

You are welcome to bring in samples of your own family documents to discuss particular issues you might have with their care and handling. (Because of time constraints, we cannot guarantee detailed discussion of all items; please limit your materials to one or two items.)

To register for the program, call 419-625-3834 and press 0 to speak with a switchboard operator (9-5, Monday-Friday) or press Option 6 to leave a message.
Posted by Sandusky Library Archives Research Center at 10:13 AM No comments: 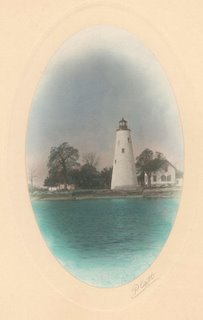 Join us for a brown-bag lunch program in the Library Program Room at noon on Wednesday, January 17, when Berlin Heights filmmaker Tom Koba will present a screening of his film, Sweet Water Lady, the Marblehead Lighthouse Story.

The Marblehead Lighthouse is the oldest continuously-operating lighthouse on the Great Lakes, illuminating the Lake Erie shoreline since 1822. The grounds of the lighthouse and the keeper's house (as seen in the photo below, circa 1890) are now the site of a state park, where tours are offered of the lighthouse interior. 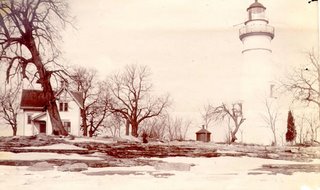 Posted by Sandusky Library Archives Research Center at 10:23 AM No comments: 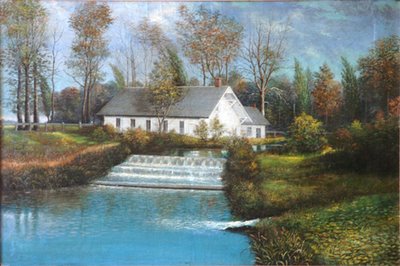 Ralph Smalley Tebbutt was a well known Sandusky area artist. Born in England on May 14, 1849, he immigrated to Sandusky with his parents when he was five years old.

For sixty years he ran a painting and decorating business. For a time, was in business with another local artist, John Holland, but they dissolved their partnership in January, 1895. We know that in 1870, Tebbutt kept a studio in the Reber Block in downtown Sandusky.

Ralph Tebbutt lent his talents to local efforts. During the first World War, painted signs and banners for the Red Cross. In 1920, he painted two scenes for a pageant that was put on by local school children. One was a scene of the Santa Maria, and the other was for a sketch about Francis Scott Key.

An article appeared in the Register after his death detailing a quartet of four drinking scenes painted for a forgotten local brewery. The article described the paintings as “remarkably free in execution, that is they are natural and look as if they just flowed from the painter’s brush. The lights and shades, shadows and expression are handled with all the skill of a master painter.” No one knows what became of these paintings.

He painted for the love of the work, apparently never attempting to sell his work, although if offered a price and it suited him, he would sell and did sell many of his paintings. According to his son, Tebbutt painted constantly until his death. At the time of his death, art critics were saying that Tebbutt had many earmarks of a genius.

Ralph Smalley Tebbutt died March 4, 1930 at the age of 81. He is buried in a family plot in Oakland Cemetery. 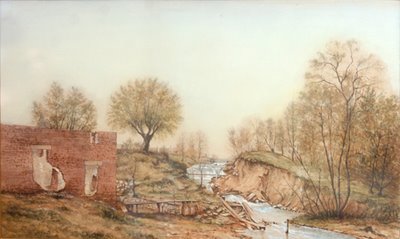 Posted by Sandusky Library Archives Research Center at 9:15 AM 10 comments:

One of the Oldest Items in Our Collections

In the vault of the Sandusky Library Archives Research Center is a manuscript copy, dated 1787, of a phrase book, containing translations of words, phrases, and speeches, from English to a local Native American language, possibly the Wyandot/Huron language. This item was donated to the library in 1943, by Dr. Marjorie Anderson (1892-1954) -- a professor at Hunter College in New York, a poet, author, former employee at the Sandusky Library, and native Sanduskian. (She was the great-granddaughter of Dr. George Anderson, Sandusky's first physician -- he died in the cholera outbreak of 1834, after treating infected patients.) 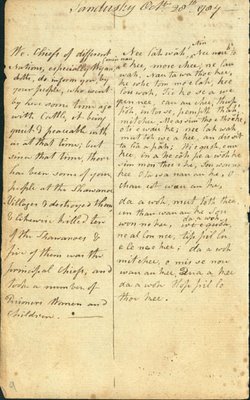 The manuscript is attributed to E.R. Jewett, but the accuracy of this claim is far from certain -- the only signatures with the Jewett name are written in pencil along the margin of a page, and don't seem to match the rest of the handwriting. Who E.R. Jewett was is also unclear -- there was a businessman in Buffalo named Elam R. Jewett, who owned a publishing company and engraving business; this E.R. Jewett, however, appears to have been born around 1811, much later than the date of this manuscript. Could there have been an earlier E.R. Jewett, who travelled around the Sandusky Bay in 1787? Or was this phrase book written by someone else (whose name we do not know), but later owned by E.R. Jewett of Buffalo? Or is there another explanation? (Anybody out there looking for a research project?) 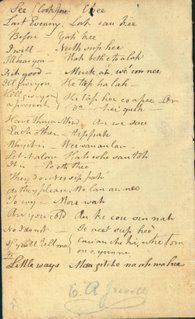 Also, some of you might be wondering, "How could this manuscript be marked 'Sandusky, 1787' when we know that the city of Sandusky was not founded until 1818?" In fact, in that era most of the region around Sandusky Bay and along the Sandusky River was identified simply as "Sandusky." It is possible (or even likely) that this phrase book was written in or around what is now known as the city of Fremont, which was called Lower Sandusky until 1849, and was the site of a Wyandot village in the 18th century. (The city named Upper Sandusky -- farther up the Sandusky River -- still exists, of course.) 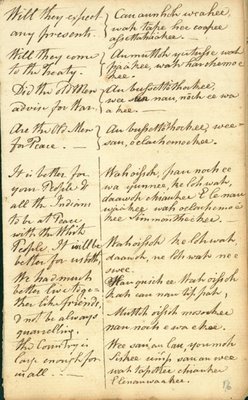 For those who study Native American languages and cultures, and the early interactions between those peoples and the European settlers, this document may prove an invaluable resource. Although access to the original item is restricted due to its age and fragility, the entire document (21 leaves on 32 digital images) is available in digital format at the library.

Update: Oops. . . . I forgot about the Reverend Edward R. Jewett, who was a founder of the Bethel Church on Water Street (between Decatur and Jackson) in Sandusky in 1852. The image below shows Reverend Jewett some thirty years later. So we might be able to assume that the phrase book was in the Reverend Jewett's possession at some point, but we still do not know the complete provenance of this document. Update 2: Here is an enlarged view of a portion of a page from the phrase book: