In the Local Authors Collection of the Sandusky Library Archives Research Center are two books about birds by Alice E. Ball. 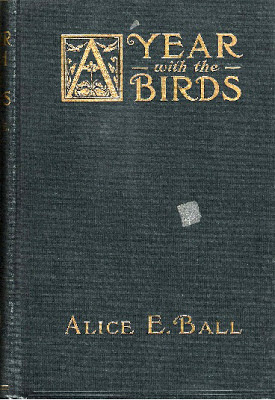 Alice E. Ball was an 1886 graduate of Sandusky High School. She was the daughter of Flamen Ball and Katharine Follett Ball, and a granddaughter of Oran and Eliza Follett. A Year with the Birds was published in 1916 by Gibbs and Van Vleck in New York City. Artist Robert Bruce Horsfall illustrated the book with 56 colored plates. Several species of birds were pictured, accompanied by poems. Alice E. Ball composed many of the poems, but some were by other poets. 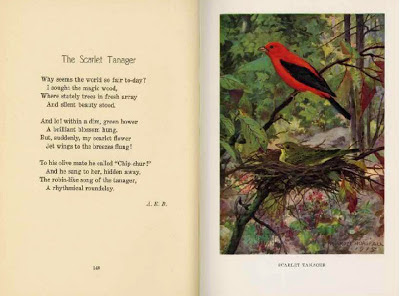 On pages 60 and 61 is a poem by Alice E. Ball entitled “Robin Redbreast.” She described how she and her siblings left food for a family of robins outside the window pane. The same robin family came back every spring for four years,  much to the Ball family’s joy. In 1923 Alice E. Ball wrote another book about birds, also illustrated by Robert Bruce Horsfall. 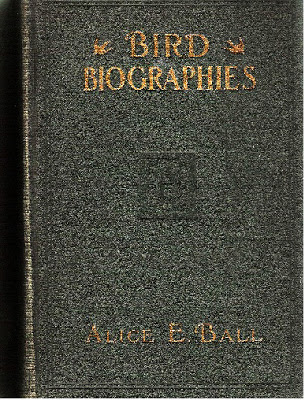 This book was an introduction to over one hundred common birds of the eastern United States. Pictured below is a brief description of the song sparrow, accompanied with a color plate by Mr. Horsfall. 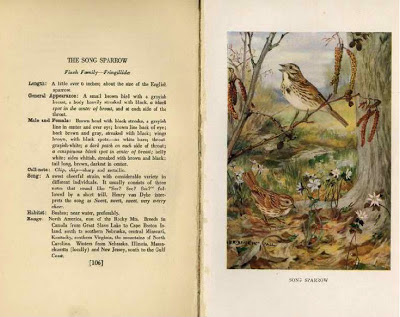 Alice E. Ball taught school for a year in Sandusky, and then she moved to Cleveland, Ohio, where she taught for twenty nine years in public and private schools. She died in New York City on April 24, 1948. Funeral services were held at the Riverdale Presbyterian Church in Riverdale, New York, and burial was at Cleveland’s Lake View Cemetery.

Miss Ball compiled a family history entitled Sketches of the Ball and Follett Families, which was privately published by the Vermont Printing Company in 1939. A copy of this title is found in the Family History section of genealogical books at the Sandusky Library. Touching tributes to both Oran and Eliza Follett are found in the book, helping readers learn personal details about these prominent early residents of Sandusky, Ohio.  Alice had fond memories of spending time in Sandusky with her maternal grandparents.
Posted by Sandusky Library Archives Research Center at 2:05 PM No comments:

When Sandusky was a Stop on the Vaudeville Circuit

Before motion pictures dominated our culture and everyone had a record player in the house, Vaudeville was the main source of entertainment, particularly for the working classes. Performers of many types traveled together on "the circuit" from city to city, presenting their acts as part of a variety program in local theaters. For as little as ten cents, people could spend an afternoon or an evening (sometimes there were two shows a day) watching singers, dancers, jugglers, magicians, comedians, and who knows what other type of performers -- and perhaps even get to see a movie with the price of admission. Sandusky had the good fortune of being along the railroad lines between major cities such as Chicago, Cleveland, and Buffalo, so many big stars of the time stopped in Sandusky for a performance. 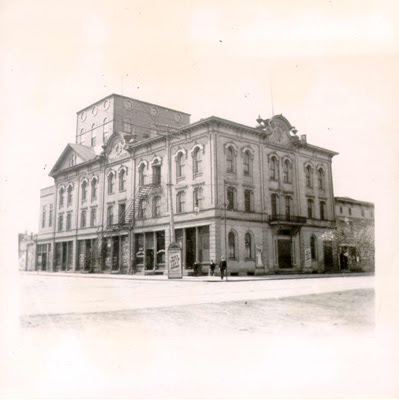 The Sandusky Theater, built as an opera house in 1877, was the major venue for vaudeville performance in Sandusky, but many smaller theaters in towns offered vaudeville shows -- including, in the early days (19th century, after the Civil War), Norman Hall, Fisher's Hall, and Link's Hall; and in the 20th century, the Majestic Theater and the State Theater. 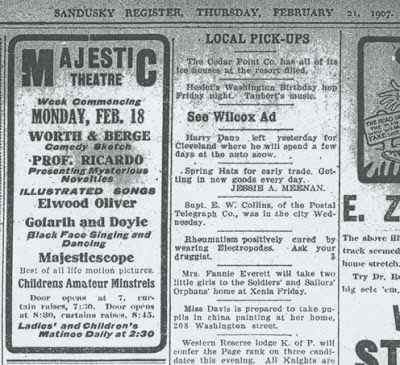 As mentioned above, many famous performers stopped in Sandusky to do their acts; many are forgotten today (like John Bunny), but were huge stars at the time; others are remembered to this day, at least by fans of show business history. 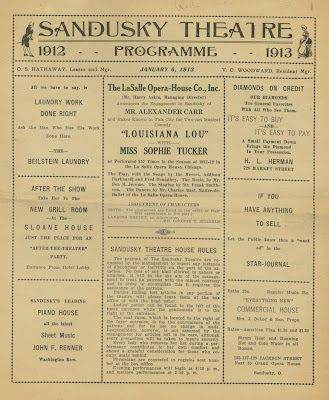 But by the 1930s, with the advent of the "talkies" (sound motion pictures), the poverty of the Great Depression, and, later, World War II and television, Vaudeville faded in popularity until it was just a memory. Its spirit lived on in television, on programs like the Ed Sullivan show, and even to this day with Leno and Letterman, and other variety shows. 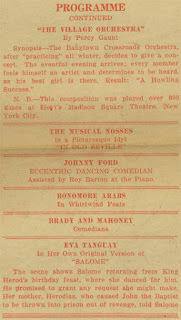 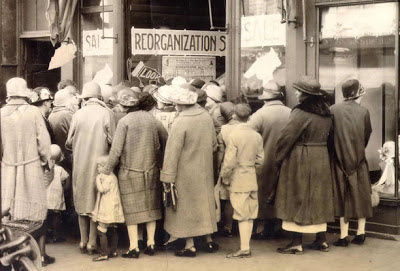 Posted by Sandusky Library Archives Research Center at 3:41 AM No comments: 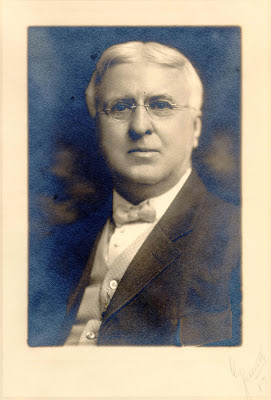 Dr. Owen A. Wagner was an 1896 graduate of Northern Illinois College at Chicago, and he graduated from the Needles Institute of Optometry at Kansas City, Missouri in 1902. After practicing for a time as an optometrist in Chicago, Dr. Wagner came to Sandusky, Ohio in 1918. From 1918 until shortly before his death in 1949, Dr. Wagner had his office and his living quarters both at the same location, 114-116 Columbus Avenue in downtown Sandusky. 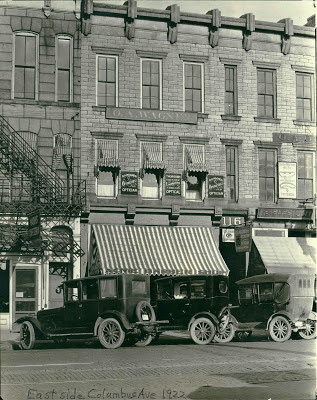 The signs along the windows in Dr. Wagner’s office stated that he offered "thorough scientific examinations." 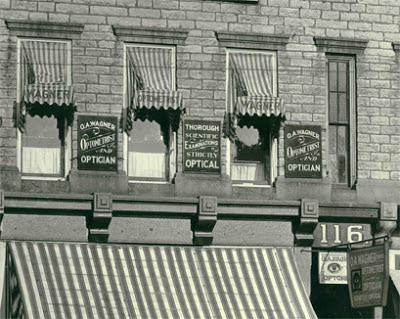 Dr. Wagner passed away at Providence Hospital on May 22, 1949, at the age of 93. His obituary, found in the 1949 Obituary Notebook, stated that he was a familiar Sanduskian for many years, and he had a pet parrot which attracted wide attention. Funeral services for Dr. Owen A. Wagner were held at the Charles J. Andres Funeral Home, with Rev. C. L. Alspach officiating. Burial was at Oakland Cemetery.
Posted by Sandusky Library Archives Research Center at 10:15 AM No comments: 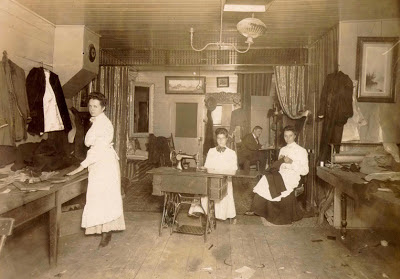 After working for Miller and Robrahn’s tailoring shop in the 1880’s, Albert H. Robrahn went into business for himself. In the 1921 Sandusky City Directory, Albert H. Robrahn had a ladies’ tailoring shop at 422 West Market Street. By 1932 Albert Robrahn had re-located the tailoring business to 814 West Adams Street, where he and his wife Ida also resided. In the picture above, Mr. Robrahn can be seen doing paperwork at a desk in the back of the shop.  One of the young ladies, on the right in the picture, has been identified as Clara Schaeffer Klemmt. One employee is sewing on a Singer sewing machine, while another young lady is sewing by hand. This vintage view of the interior of a local tailoring business takes us back to a simpler time.
Posted by Sandusky Library Archives Research Center at 12:00 PM No comments:

40th Anniversary Meeting of the International Union of Operating Engineers 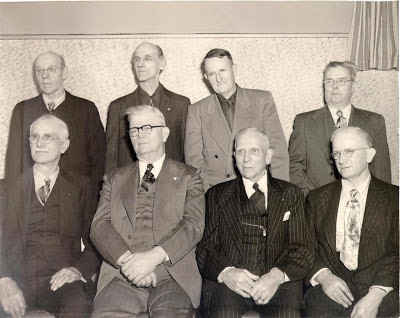 On January 15, 1952 local photographer William Mound took this photograph of the members of Local 496 of the International Union of Operating Engineers. Pictured are: (top row, left to right) Joe Geise, William Schemmer, Charles Popke, Sidney White; (bottom row) Frank Converse, Ben Sprau, and Frank Merrick. Ben Sprau was a charter member of the local chapter of the International Union of Operating Engineers, which was begun on January 12, 1912. The group started with only twelve members, and later grew to a membership of almost one hundred. Mr. Sprau worked as a marine engineer for over twenty five years, and later served as an engineer for the city of Sandusky.
Posted by Sandusky Library Archives Research Center at 10:09 AM No comments: 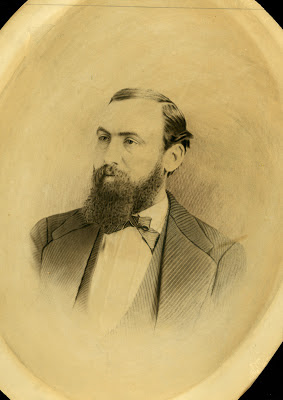 Stephen Wallace Dorsey was born in Rutland County, Vermont in 1842. He moved to Oberlin as a young man, and was living in the home of his future father-in-law, Chauncey Wack in 1860. (Oberlin’s Downtown Walking Tour Guide refers to Chauncey Wack as one of Oberlin’s “anti heroes.”) During the Civil War, Dorsey was an officer in the First Regiment of the Ohio Light Artillery. Following the war, Dorsey married Helen Wack, who was known as the prettiest girl in Oberlin.


Records from the Sandusky Tool Company show Stephen W. Dorsey as the company’s superintendent from May 13, 1869 to September 27, 1872. Clayton Chauncey Dorsey, son of Stephen and Helen Wack Dorsey was born in Sandusky in 1871. The Dorsey family moved to Arkansas, and Stephen W. Dorsey became president of the Arkansas Railway Company. He was elected to the U.S. Senate, serving from March 4, 1873, to March 3, 1879.

In the 1880’s, Stephen W. Dorsey achieved notoriety by his connection with the “Star Route” scandal. A group including former Senator Dorsey and assistant postmaster general Thomas Brady over-funded postal contracts, and skimmed off some of the money. The case was covered by the New York Times and other periodicals. Dorsey was never convicted of a crime concerning this case, although many thought he was guilty.

Stephen Dorsey led a colorful life, including raising cattle and speculating in mines. Curiously in the 1880 Census, Stephen Dorsey was listed in New York as a stockbroker, and also in New Mexico as a stock raiser. His mansion in New Mexico was adorned with gargoyles of himself, his wife, and brother, among others. After the death of Helen Wack Dorsey, Stephen married Laura Bigelow. Stephen W. Dorsey died in California in 1916. He is buried at Fairmount Cemetery in Denver, Colorado with his first wife Helen. 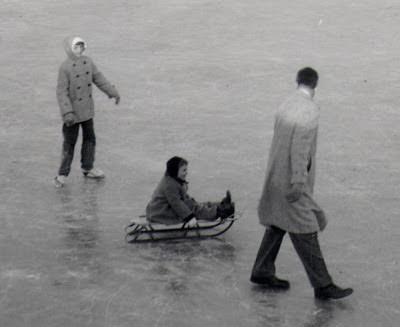 People of all ages enjoyed sledding and skating at Battery Park during the winter of 1954. 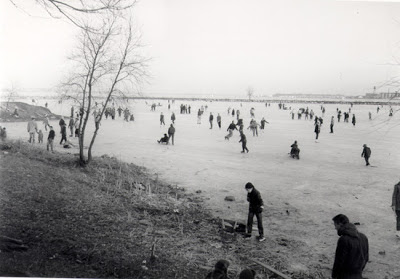 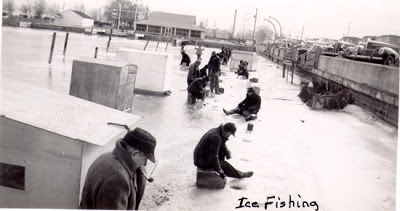 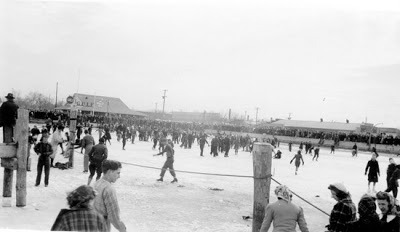 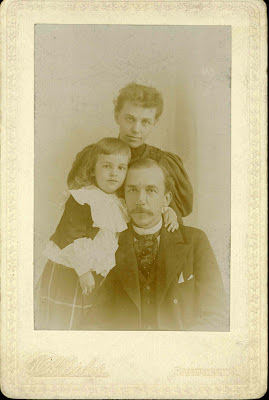 Reber Nettleton Johnson was the son of Leonard Sumner Johnson and Alice Reber Johnson, born in Sandusky on June 7, 1890. Reber’s paternal grandfather, Leonard B. Johnson, once owned Johnson’s Island, in Sandusky Bay. His maternal grandfather, George Reber, was a prominent attorney in Sandusky. Reber Nettleton Johnson became an internationally known violinist while still a child. He is seen with his violin in the picture below when he was only three years and eleven months old. 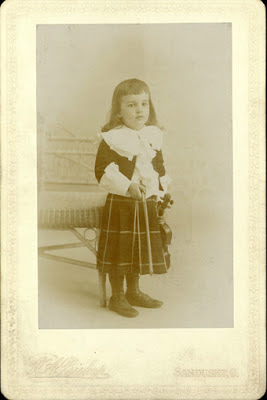 According to an article in the June 9, 1966 issue of the Sandusky Register, Reber N. Johnson played violin at Carnegie Hall when he was age seven, and he performed in Paris at age eight. 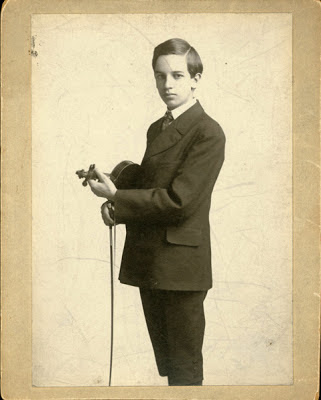 Reber Johnson received a doctorate in music from Brown University in 1914, and shortly thereafter became first violinist with the New York Philharmonic Orchestra. He was concertmaster of the New York Symphony from 1919 to 1923, when he accepted a position of professor of violin at the Oberlin College conservatory of Music. He held that post for more than thirty years.

Reber Nettleton Johnson died after a lengthy illness on May 31, 1966, in Oberlin, Ohio. His wife, the former Esther Andrews, preceded him in death in 1964. The Sandusky Library Archives Research Center was fortunate enough to have been given several portraits of Reber Nettleton Johnson by Glenn Everett.
Posted by Sandusky Library Archives Research Center at 3:33 PM No comments:

J.C. Penney Company Opened a Store in Sandusky in 1929 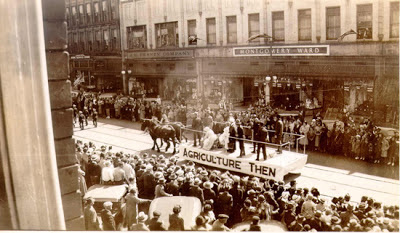 The March 27, 1929 issue of the Sandusky Register featured an article which announced that the J.C. Penney Company was to open a store in Sandusky. Sandusky’s J.C. Penney store was number 1076 in the retail chain. The Sandusky store was located next to Montgomery Ward in the 200 block of Columbus Avenue.

The J.C. Penney Company began in 1902 in a small mining town in Wyoming, "based on the principles of honesty and fair dealing." Mr. Erwin H. Wallace was the first store manager of the Sandusky J.C. Penney store, serving in that position until 1959. The picture above shows both the J.C. Penney and Montgomery Ward stores in downtown Sandusky during the Northwest Territory Celebration in April of 1938.

In 1955 the J.C. Penney store expanded and added an addition to its store, at the site of the former Montgomery Ward store. 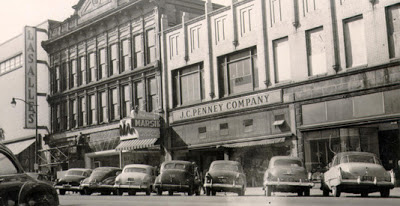 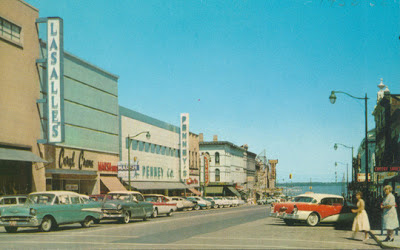 Posted by Sandusky Library Archives Research Center at 10:30 AM 5 comments:

You Want a Pretzel, Don't You? 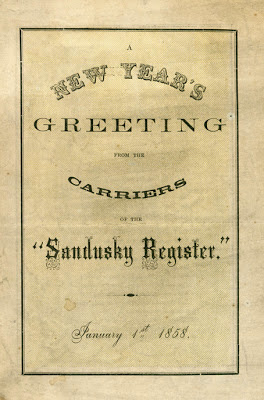 Here is a link to our article on the history of the New Year's Pretzel:

And you can find an audio podcast about the New Year Pretzel (along with podcasts on several other subjects) here: