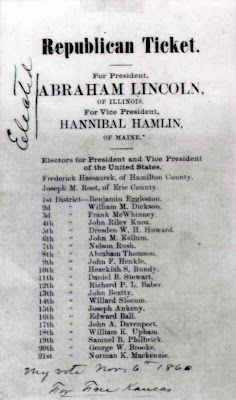 Once again, October is Archives Month, and the Sandusky Library will be offering several local history events in commemoration.

This year's theme is "Elections in the Archives." Therefore we'll start the month with a program on Saturday, October 4, at 2PM in the library program room, where we will have a sort of "show and tell" from the library's archival collections, describing elections and the electoral process in Sandusky, from the very first local election in 1824 to more recent times. There will be plenty of artifacts and historical documents to view, and we might even talk a little about Archives Month and the importance of archives in our lives. 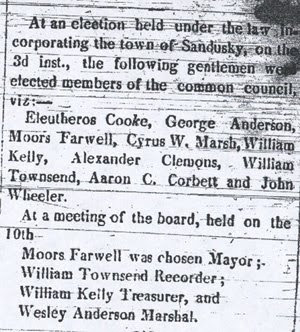 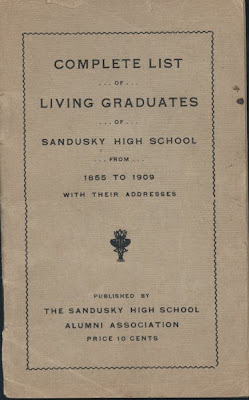 High School alumni directories can be very helpful in genealogical research. The page below shows both the maiden names and married names of female graduates. Since the directory was current to 1909, by searching the 1910 United States Census, more details about the graduates can be gleaned, such as place of birth, occupation, and the names of children and spouse. (U.S. Census records are available at the Archives Research Center on microfilm, as well as through the databases Ancestry Library Edition and Heritage Quest. See the Reference Staff for assistance.) 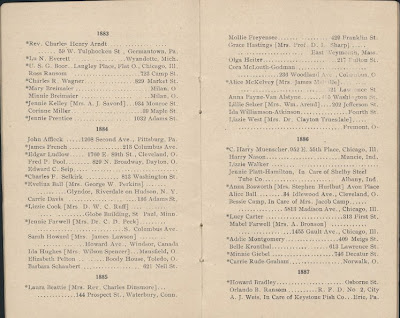 The listings in the directory will provide the names of the classmates of your ancestors. By then searching through the appropriate Sandusky High School “Fram,” you can view photographs of various clubs, teams, and organizations, which give further details about the students of Sandusky High School throughout several decades. Yearbooks from St. Mary’s Central High School and Perkins High School can also be found at the Archives Research Center.

In 1994, the Sandusky High School Alumni Association published an Alumni Directory, which is shelved immediately after the collection of high school yearbooks from Sandusky High School. The Alumni Directory serves as an index to the yearbooks, giving the year of graduation, and providing the maiden name of females. An address that was current in 1994 is also listed. At yearly class reunions, current addresses of living graduates are usually proved in a pamphlet given to attendees. 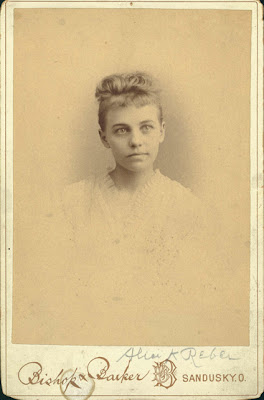 Alice Reber Johnson is just one of the many persons whose names are listed in the “Complete List of Living Graduates of Sandusky High School from 1855 to 1909.”
Posted by Sandusky Library Archives Research Center at 9:50 AM 2 comments:

Program Announcement: The History of the "Tin Goose" 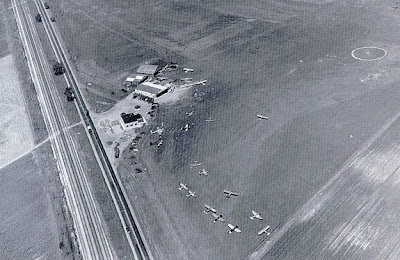 On Monday, September 22, at 7:00 p.m. join us in the Library Program Room when Sandusky resident Dale Hartlaub presents a talk on the history of the "Tin Goose." The "Tin Goose," the Ford Trimotor airplane, was used for many years to transport people and cargo between the Lake Erie islands and the mainland. An avid collector of "Tin Goose" memorabilia, Mr. Hartlaub will also talk about the artifacts from his collection. Registration is requested but not required. To register, call 419-625-3834 and press 0 to speak with a switchboard operator (9-5, Monday-Friday) or press Option 6 to leave a message.
Posted by Sandusky Library Archives Research Center at 2:32 PM 1 comment: 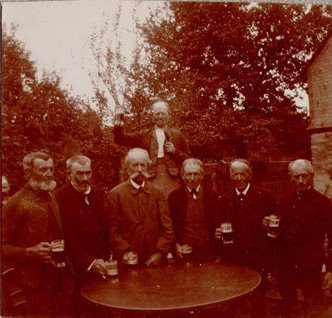 Bring your lunch and join us on Wednesday, September 17, from 12:00-1:00 p.m. in the Library Program Room was we explore topics in local history. Becky Hill, Head Librarian of the Hayes Presidential Center, will discuss the German roots of a large percentage of Northwest Ohio residents. Germans in this area came mostly from two different migrations - one usually through Pennsylvania in the 1700s; the other direct from Germany in the 1800s. She explains the differences in the people, the trips, and their heritage. Registration is requested but not required. To register, call 419-625-3834 and press 0 to speak with a switchboard operator (9-5, Monday-Friday) or press Option 6 to leave a message.
Posted by Sandusky Library Archives Research Center at 3:39 PM 2 comments:

Oliver Hazard Perry’s Victory at the Battle of Lake Erie 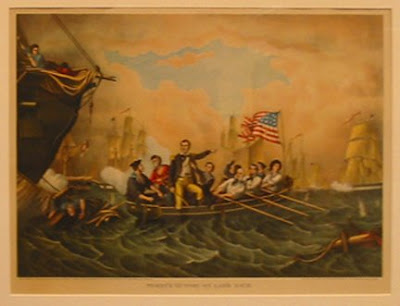 Oliver Hazard Perry became a national hero after his victory at the Battle of Lake Erie on September 10, 1813. Perry’s words to William Henry Harrison, “We have met the enemy and they are ours,” have become immortalized. The New York Times covered the celebration of the 45th anniversary of Perry’s Victory in 1858. In 1911 A.G. Field’s minstrels featured a reproduction of Commodore Perry’s victory in “The Naval Review,” which played in Sandusky on May 12.

In September 1913 citizens of Sandusky hosted a two-day celebration commemorating the one hundredth anniversary of Oliver Hazard Perry’s victory at the Battle of Lake Erie. The September 8, 1913 headline from the Sandusky Register stated that the Perry Parade was “to be the grandest street spectacle ever witnessed here.” Every downtown street was decorated with flags, bunting and electric lights. 5,000 people marched in the parade, in which there were twelve bands and one hundred floats. 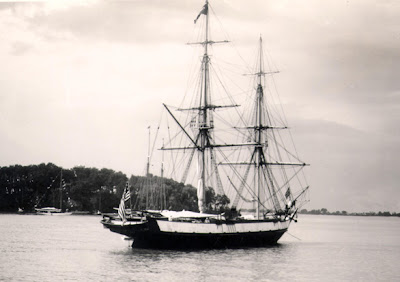 Perry’s Victory inspired books, songs, and paintings, and the city of Perrysburg was named after Oliver Hazard Perry in 1816. You can visit the Perry's Victory and International Peace Memorial at Put in Bay. From atop the Doric column, one can see for miles across Lake Erie. On June 2, 1936 President Franklin Roosevelt established the Perry Victory and International Peace Memorial as part of the National Park Service.
Posted by Sandusky Library Archives Research Center at 2:42 PM 1 comment:

The 1899 advertisement below suggests that the Big Four was the best line for traveling to Sandusky and the Islands. After arriving in Sandusky on the train, passengers could then connect with a steamer to go on to Cedar Point, the Lake Erie Islands or Detroit. 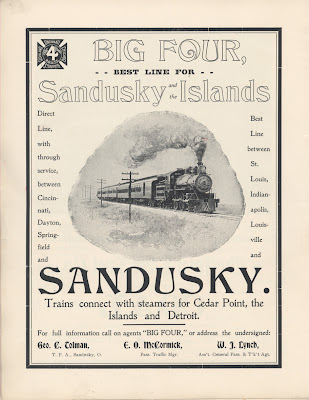 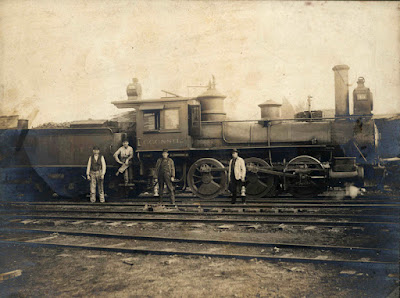 Above are pictured four workers on the “Big Four” Railway. Railroads have been an important part of the history of the Sandusky area, beginning with the Mad River and Lake Erie Railroad, which was the first railroad to be built and operated in Ohio. Ground was broken for the Mad River and Lake Erie Railroad on September 17, 1835.
Posted by Sandusky Library Archives Research Center at 9:49 AM 6 comments: 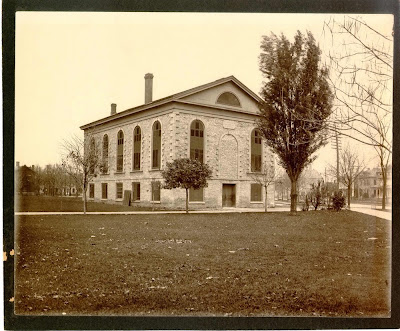 John Beatty, the Mayor of Sandusky from 1833 to 1836, founded a church in Sandusky in 1835, after the Methodist Church voted against hosting an antislavery speaker. He withdrew his membership from the existing Methodist Church and formed a new Methodist church, commonly known as the “Beatty Church.” It was located at the west end of Washington Square, along Jackson Street, facing Washington Street. After Beatty’s death, most of the membership of the Beatty Church returned to the parent church.

During the Cholera Epidemic of 1849, the building formerly known as the Beatty Church housed a cholera hospital. Hewson Peeke wrote in The History of Erie County that the city of Sandusky had seized the building for use as a hospital. Charles E. Frohman devoted an entire chapter of his book, Sandusky's Yesterdays, to the “Cholera Days” of Sandusky.

In 1855 the Baptist Church purchased this building. Rev. Justin D. Fulton was the minister of the Baptist Church in Sandusky from 1855 to 1859. Former Sandusky dentist Frank Sage wrote in the January 19, 1923 Sandusky Register that Rev. Fulton was “fearless in attacking with fiery zeal, public wrong, abuse of all descriptions.” Rev. Fulton later pastored churches in Boston and New York. He wrote several books, many of them expressing his anti-Catholic sentiment. Justin D. Fulton married a Sandusky girl named Sarah Norcross after he had moved to Boston.

The German Lutherans of Sandusky purchased the building in 1862. (The Lutherans actually traded buildings with the Baptists, paying an additional $2,000 in cash.) Rev. J. G. Lehrer was the Lutheran minister in 1862. The History of Zions Lutheran Church tells of Rev. Lehrer’s direction of the congregation toward order and progress. Members who failed to live up to their calling were disciplined, and sometimes excluded from the congregation. The Lutheran church held services here until November 12, 1899, moving to the building they still use today, at Columbus Avenue and Jefferson Street. Eventually the building on the courthouse square was demolished.

The old stone church in the Courthouse Square hosted many different groups of Sanduskians, with some very strong-willed men in leadership positions. Several church histories, historical files, and microfilmed church records are available at the Archives Research Center of the Sandusky Library for further research. 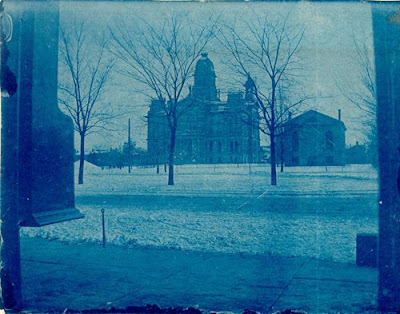 View of the Beatty Church and Erie County Courthouse from Washington Row, circa 1890.
Posted by Sandusky Library Archives Research Center at 9:29 AM No comments: