On February 27, 1865, over one hundred Confederate States officers, who were being held as prisoners of war at the Johnson’s military prison, signed this letter of appreciation to Lieutenant Foster V. Follett, who was serving in the 128th Ohio Volunteer Infantry. 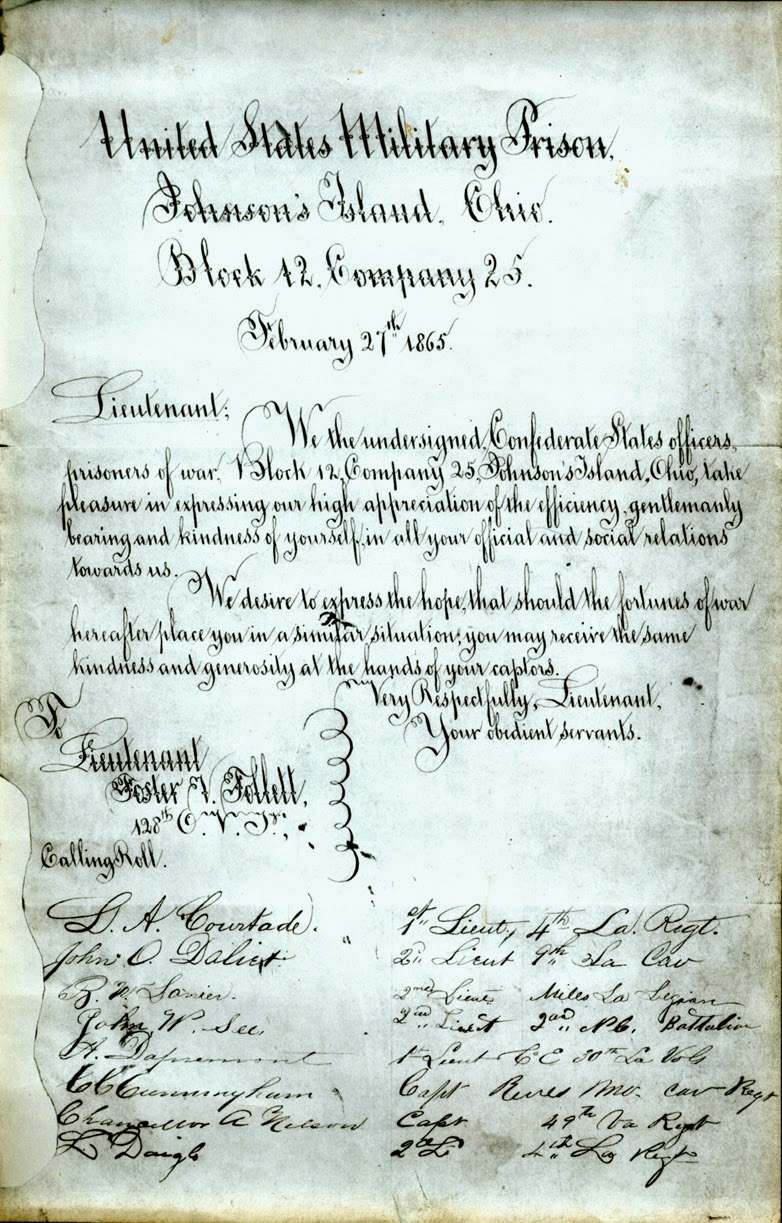 We the undersigned Confederate States officers,
prisoners of war, Block 12, Company 25, Johnson’s , take
pleasure in expressing our high appreciation of the efficiency, gentlemanly
bearing and kindness of your self, in all your official and social relations
towards us.
We desire to express the hope that should the fortunes of war
place you in a similar situation you may receive the same
kindness and generosity at the hands of your captors.

The Confederate officers signed their name under the “Calling Roll.”  Signing the first page of the letter of appreciation were:

On February 10, 1958, Lieut. Foster V. Follett’s granddaughter, Helen Follett Brooks,
sent a letter to "the Historical Society in ," accompanying a photocopy of the Confederate prisoners’ letter to her grandfather.  (Copies of both letters are now housed in the of the Sandusky Library.) She explained that someone in her family had told her that Lieutenant Follett was so distressed over the poor conditions affecting the Southern officers, that he would eat nothing that the prisoners did not have. He wrote to his wife and asked her to solicit food from friends and residents of to help relieve the poor conditions at the prison. The family has always maintained that Lieutenant Follett’s early death was due to illness suffered from his poor diet during his years in the Civil War. Foster V. Follett died on October 12, 1882, and he is buried in . Foster V. Follett’s acts of kindness during a time of war indicate his deeply rooted core values.

Foster V. Follett was the son of Foster M. Follett, who also had served in the Civil War. Foster M. Follett was known for his heroic efforts to aid the sick during the Cholera Epidemic of 1849. The son of Foster V. and Portia Follett, whose name also was Foster Morse Follett, became a well known comic artist.
Posted by Sandusky Library Archives Research Center at 8:00 AM 3 comments:

Interior Views of the Perry and Bretz Clothing Store

From 1918 until its closing in 1963, the Perry and Bretz Store sold men’s clothing and accessories at 136 East Market Street in downtown Sandusky. 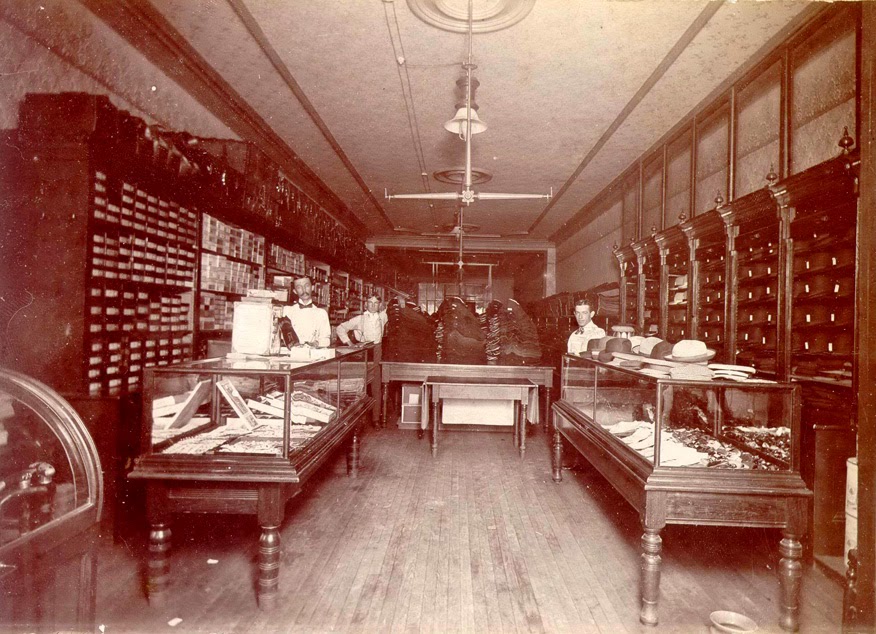 The 1919 Sandusky city directory lists Jay J. Perry and Robert B. Bretz as the proprietors of Perry and Bretz. By 1927 the store was run by Robert B. Bretz, Donald D. Perry, and Eugene J. Perry. 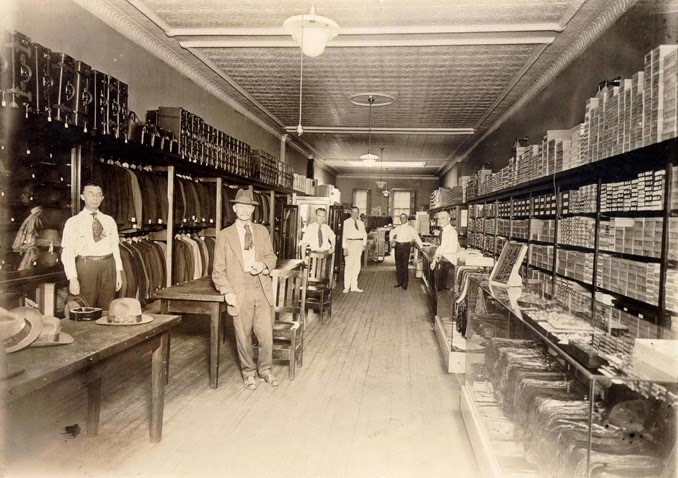 When Bretz died in 1947, his obituary stated that he had been one of Sandusky’s oldest business men, having been in the clothing business in Sandusky for sixty-five years. The Perrys continued to operate the store until 1963. An article in the July 8, 1963 issue of the Sandusky Register featured a going out of business sale for the Perry and Bretz store. 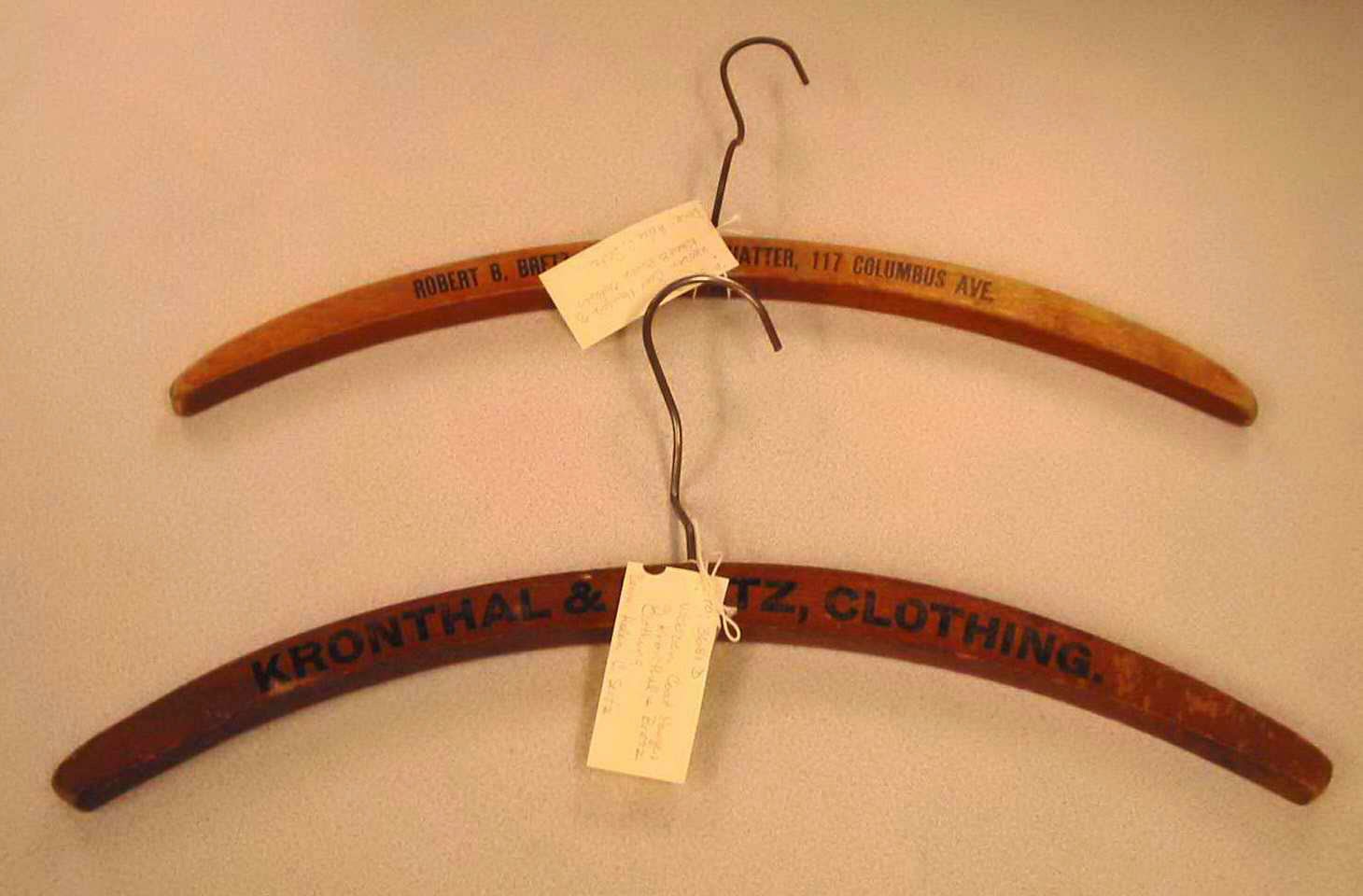 Have you ever seen an old sign on a building that doesn't relate to what is in the building today, and wondered about the origin of the sign? There is a building like that on Washington Street with a story to tell.

The Overmyer-Zechman-Ball Company opened its doors in Sandusky in January of 1926. The January 30, 1926 issue of the Sandusky Star Journal reported that the Overmyer-Zechman-Ball Company, along with Hilt and Auxter, were considered “ultra modern” garages. The large brick garage buildings were located in the 700 block of West Washington Street, between Lawrence and Fulton. The Overmyer-Zechman-Ball Company sold and serviced Dodge Brothers cars and Graham Brothers trucks. Hilt and Auxter were the agents for Buick and Maron motor cars. Both garages had large showrooms that faced Washington Street. The buildings were designed and constructed under the direction of Sandusky architects Millott and Parker, and the general contractor was Steinle and Wolf, from Fremont. M.J. Callan and son did the excavating and cement work, and Klein Structural Irons Works of Bellevue furnished the steel structural iron. Many other local businesses had a part in the new building. 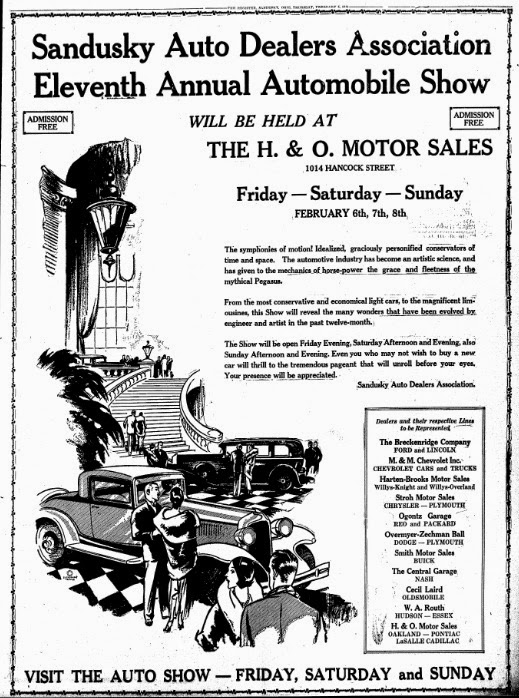 According to Sandusky city directories, by 1932, the Overmyer-Zechman-Ball Company had become the Overmyer Ball Company, and Smith Motor Sales was in the building formerly occupied by Hilt and Auxter. In the first half of the twentieth century, the automotive industry changed rapidly. In the early 1950s, Overmyer-McCullough, Inc. was selling Dodge and Plymouth vehicles at 709 W. Washington Street, and by 1960, there was no longer a business in operation in Sandusky that included the Overmyer name. A variety of different companies have been in business at 709 W. Washington Street through the years. 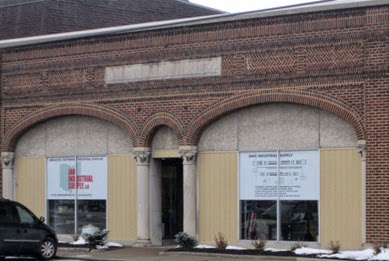 Visit the Sandusky Library to learn about historic businesses in Sandusky by browsing through several decades of Sandusky city directories.
Posted by Sandusky Library Archives Research Center at 9:00 AM 1 comment: 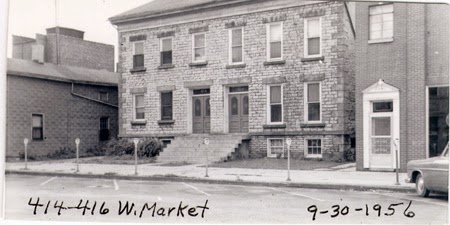 According to the book, At Home in Early Sandusky, by Helen Hansen, this double stone house, which no longer stands, was built at what is now the 400 block of West Market Street by Leonard B. Johnson (of Johnson's Island) in 1846. William A. Simpson bought the property in 1848. In 1866, Rev. J. George Lehrer owned the west half of the house, and Julius Robrahn owned the right side. Until 1960, this property had several different residents. In the 1920 U.S. Census, sisters Mary and Amelia Maul lived in one half of the house, where they both worked as dressmakers.

In 1960 the double stone house was razed, for use as a parking lot. This link to Google Maps shows what the space looked like in the fall of 2013. See At Home in Early Sandusky to learn more about houses in Sandusky, some still standing. This book is available at the Sandusky Library in the Reference Services area of the Sandusky Library, or you may buy it for $1.00 at the check-out desk at the library.
Posted by Sandusky Library Archives Research Center at 9:00 AM 1 comment:

These two Valentines were donated to the Follett House Museum from Mabel Wilcox Orwig. The full story behind the giver and receiver of these valentines is unknown. Each piece of paper was folded four times and cut into scallops. Then holes were punched and pins were pricked through the paper to create a decorative design. 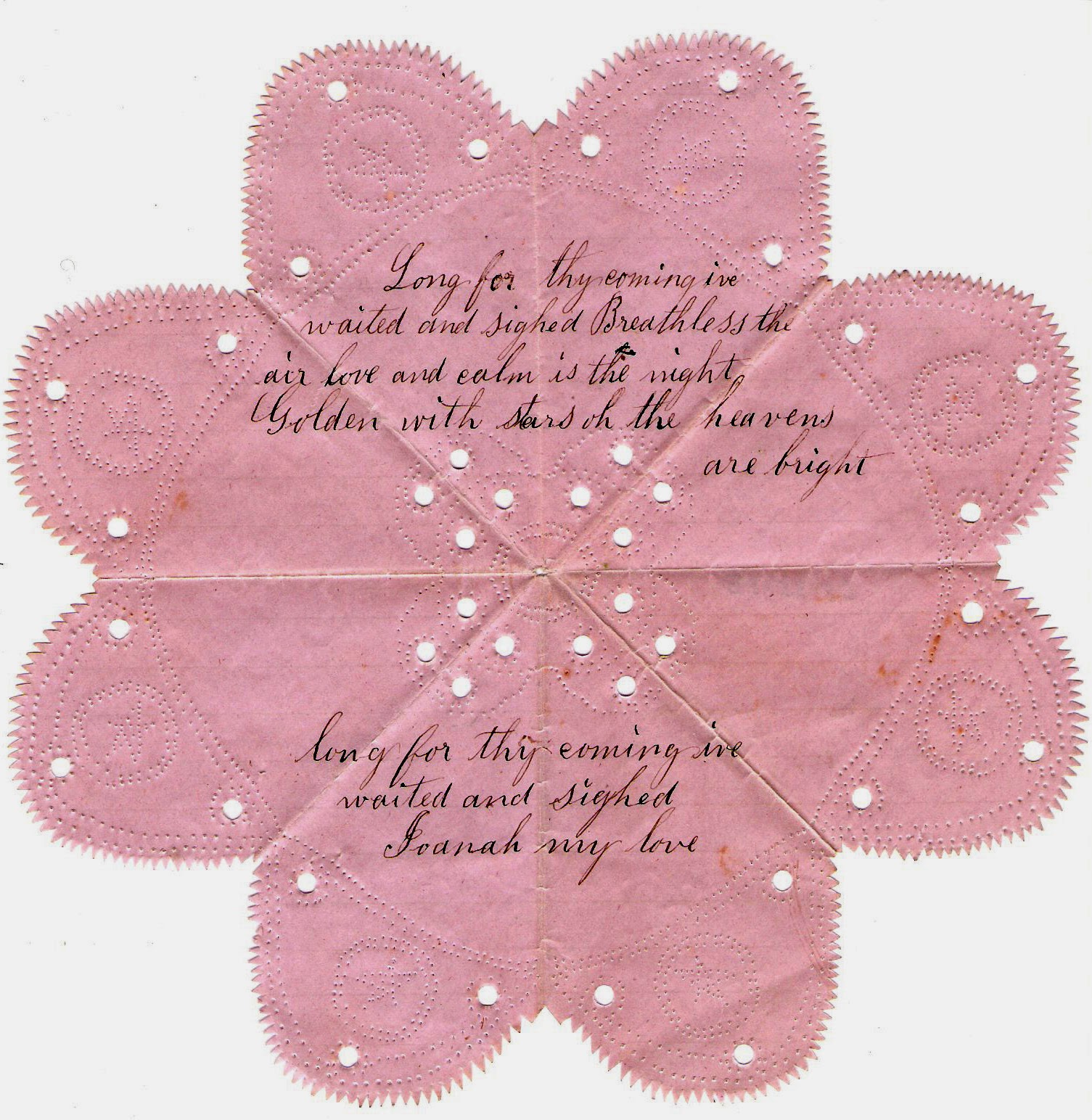 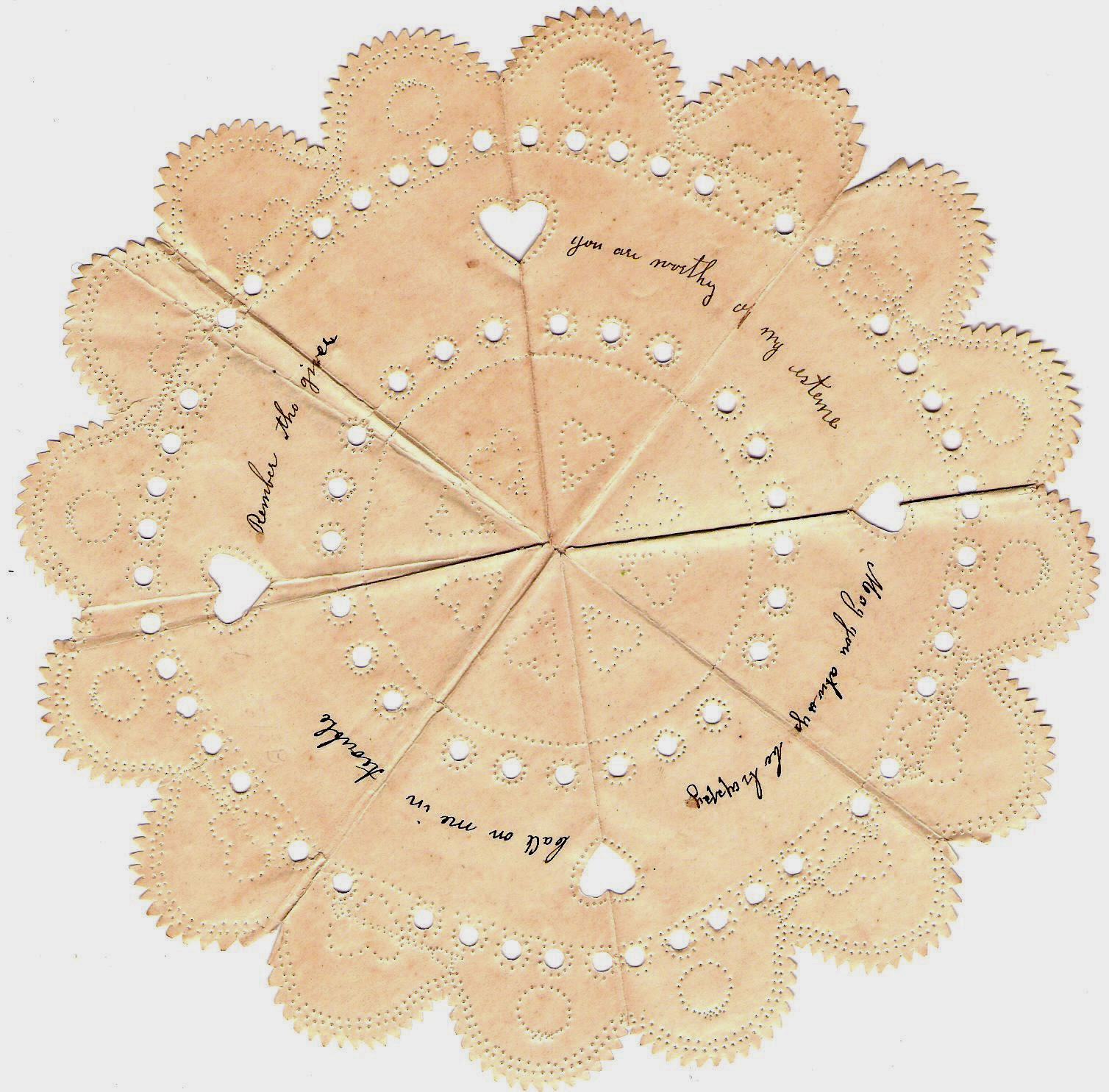 The Valentine made with white paper had this inscription:

These lovely handmade cards were donated in the 1960s, but most likely were created many years before that time, in the nineteenth century. Pin pierced designs have been popular for several centuries.
Posted by Sandusky Library Archives Research Center at 9:20 AM No comments: 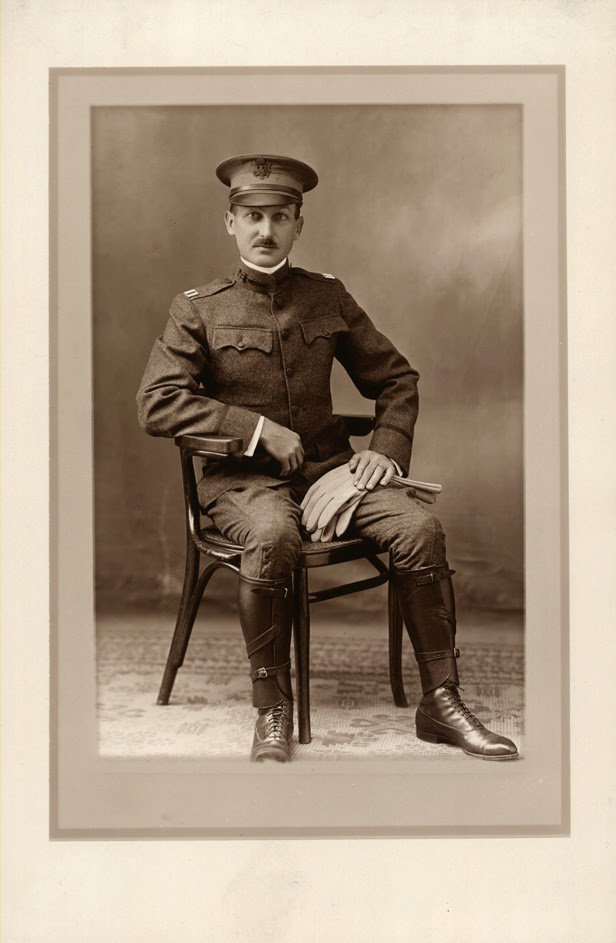 Clifford Marshall King was born in Sandusky on December 17, 1879 to Judge and Mrs. Edmund B. King. After attending Oberlin College for a time, Clifford M. King graduated from Western Reserve University in 1901. He earned his civil engineering degree from Cornell University in 1904. After college, he worked for the United States Reclamation Service in the west. From 1908 to 1911, he was the engineer for the city of Sandusky, and later became the Erie County Engineer. Mr. King was the engineer in charge of the construction of the Cedar Point Chaussee. 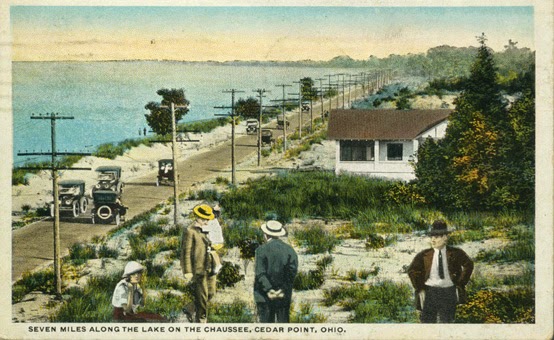 In 1917, Mr. King was commissioned a captain in the U.S. Engineers. During World War I he was an instructor in an officers’ training camp. He served overseas with the 528th Battalion of Engineers. After returning home from military service, Mr. King worked for the city of Cleveland in its engineering department.

On January 2, 1922, Clifford M. King died at Charity Hospital in Cleveland, after a brief illness. He was only 42 years old. Mr. King was survived by his parents and his wife, the former Edith Davis. Funeral services were held at the Masonic Temple in Sandusky, and burial was in Oakland Cemetery.  Mr. King accomplished much in his brief life, and he was sadly missed by his family and friends and associates.
Posted by Sandusky Library Archives Research Center at 8:00 AM No comments: 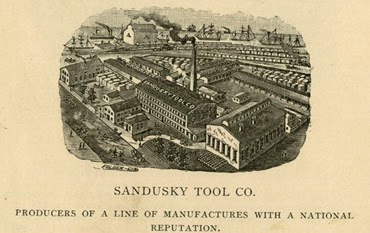 The Sandusky Tool Company, pictured above in the book Sandusky of To-Day, was established in 1869 to succeed Allen, Dorsey and Tenner.  George Barney, Sr. was the company’s first president, and Stephen W. Dorsey was its first superintendent. The company was well known for its fine quality hand tools, including planes, hoes, axes and other small tools. A group picture of the company’s employees was taken about 1870. Note that some of the workers were quite young. 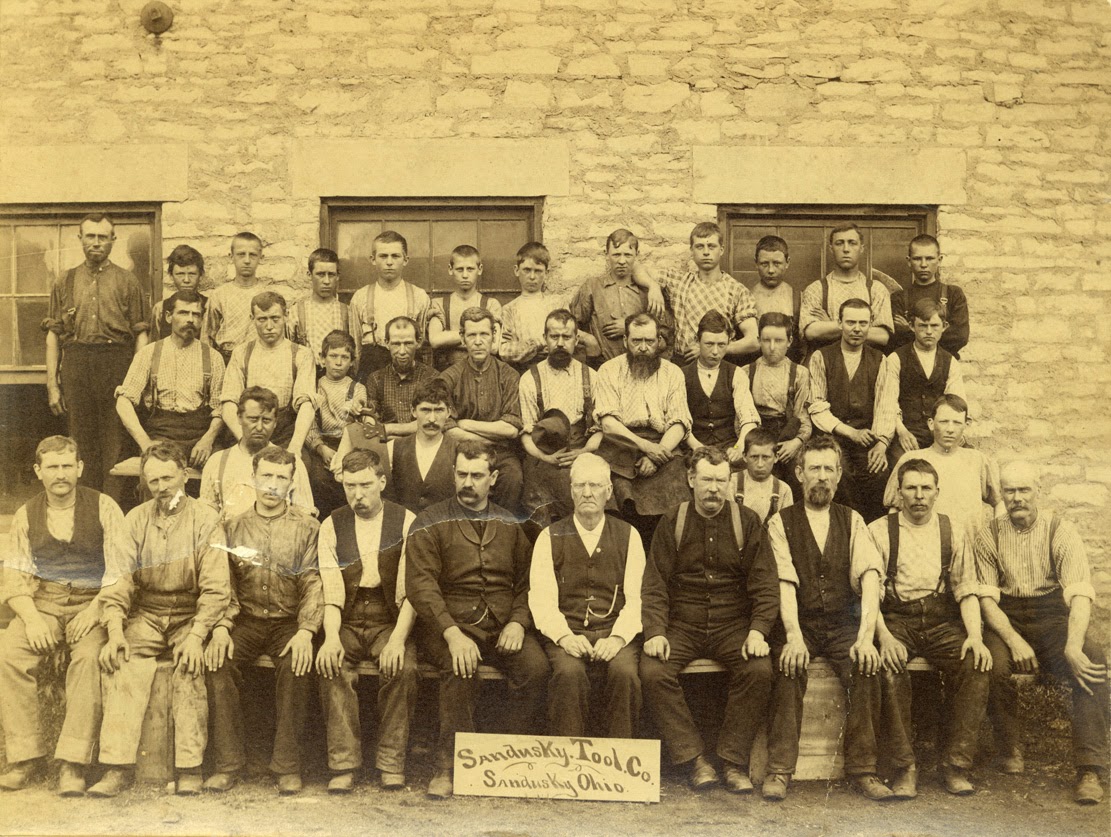 Here is a page from the 1886 Sanborn Map that shows the location of the Sandusky Tool Company on Meigs Street, adjacent to Sandusky Bay: 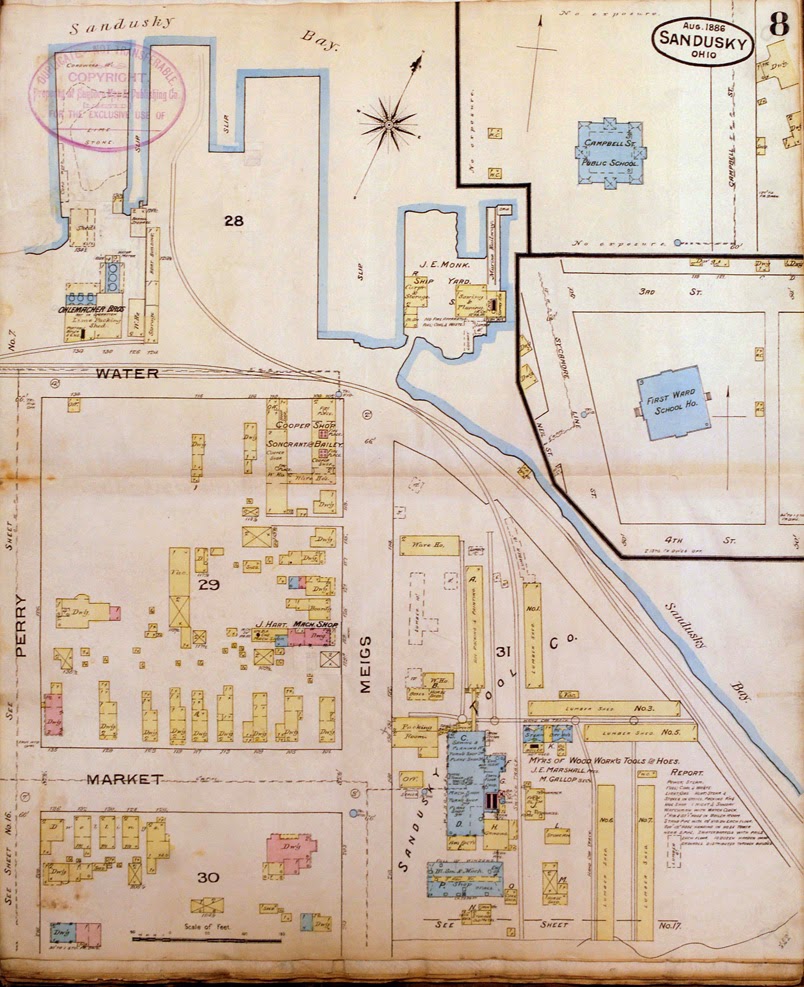 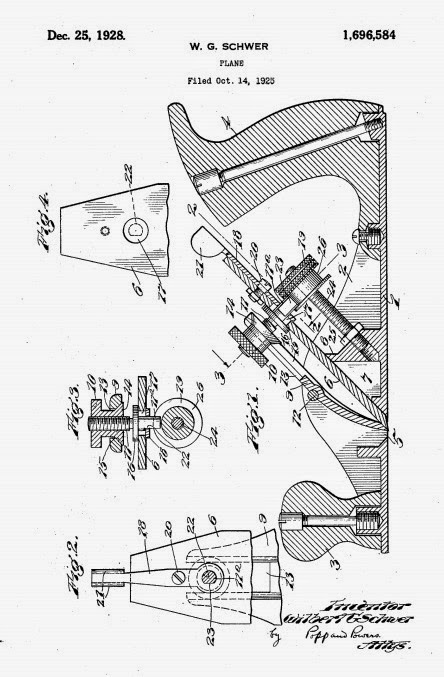 Mozart Gallup was director, treasurer, and assistant secretary of the Sandusky Tool Company in 1880, and on September 14, 1886, he became the president and general manager. Mr. Gallup held the office of president of the company until his death in 1923. 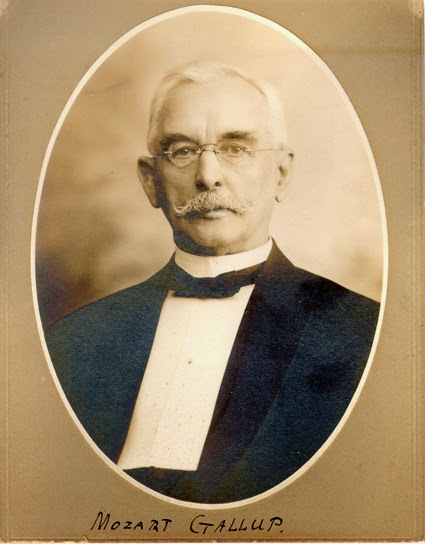 This picture of the Sandusky Tool Company was most likely taken in the 1920s. 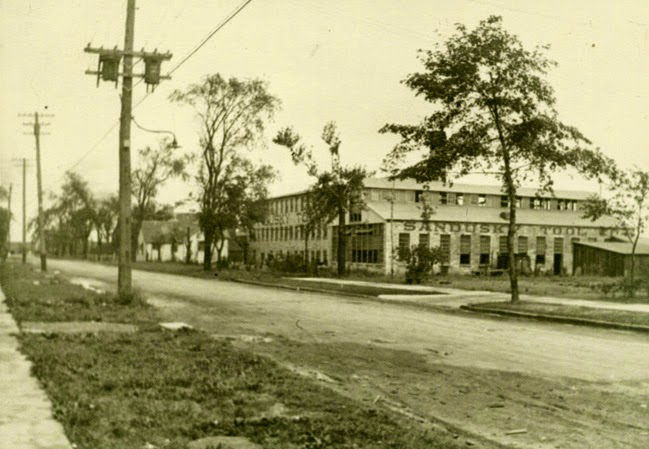 In 1924, the Sandusky Tool Company was hit by a tornado, and within five years, the company closed. 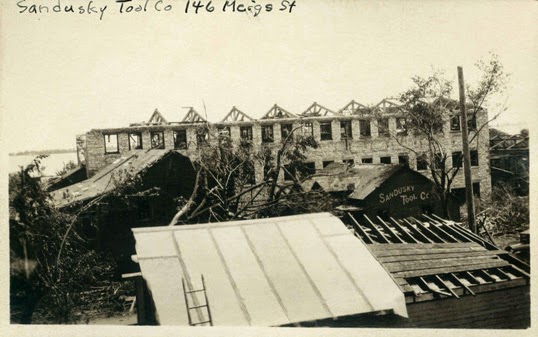 Program Announcement: The Second Baptist Church in Sandusky and the Nation, 1849 to the Present 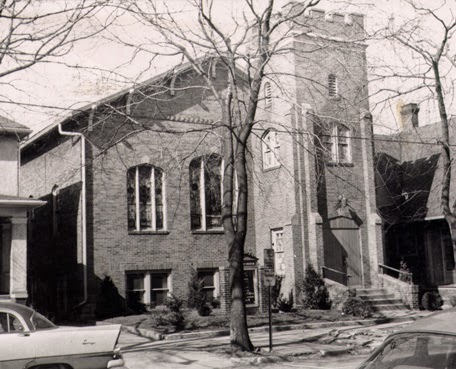 Join Diversity and Management Consultant Gerald Garrett as he presents the history of the Second Baptist Church, including its role in the Underground Railroad.
Posted by Sandusky Library Archives Research Center at 2:29 PM No comments: 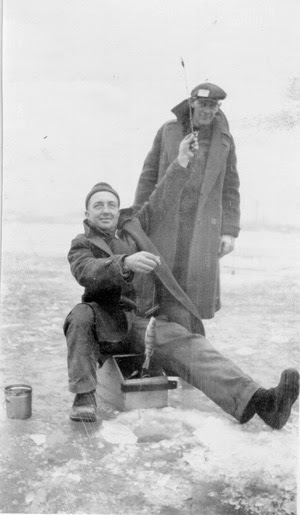 An issue of the Ford Times from 1961 stated that Sandusky Bay was considered “Lake Erie’s ice fishing capital.” Here are some historic views of ice fishing on the Bay.

One of the men in the picture below is drilling a hole in the ice for his fishing spot. 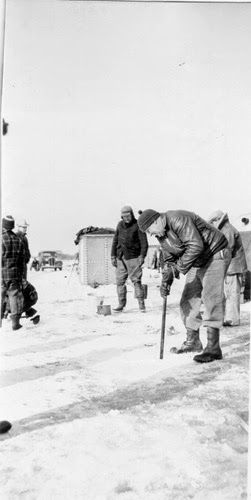 Here is a picture of several men fishing near the docks in 1930. 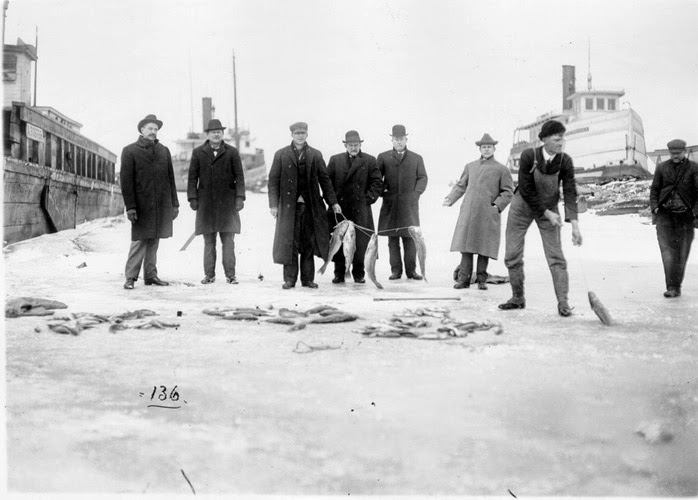 These folks are ice fishing without the benefit of an ice shanty. Several cars can be seen going over an “ice bridge” across Sandusky Bay about 1930. 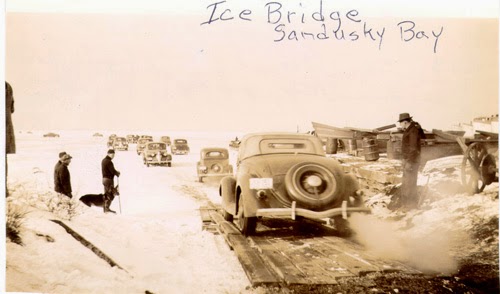 While it is often said that “no ice is safe ice,” the Ohio Department of Natural Resources provides tips and safety information for ice fishing in Ohio at their website.
Posted by Sandusky Library Archives Research Center at 10:00 AM No comments:

View of Columbus Avenue from Sandusky Bay, Circa 1938 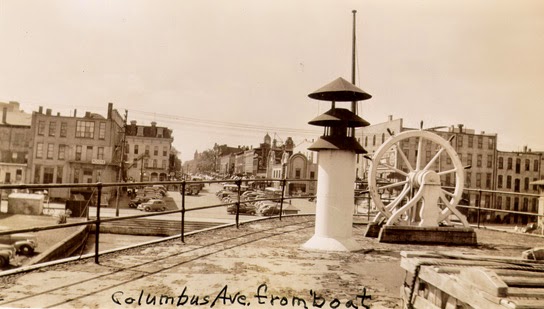 The picture above was taken from an unidentified boat (possibly the Chippewa) as it was approaching the dock from Sandusky Bay about 1938. At that time, the Moose and VFW both had their club rooms in the building at the northeast corner of Columbus Avenue and Water Street, in the former Post, Lewis and Radcliffe building, now home to the Water Street Bar and Grille. 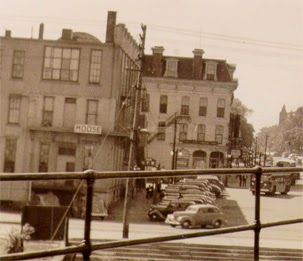 Buses can be seen transporting people to the busy downtown and waterfront of Sandusky. In the early 1940s, two bus lines were in operation in Sandusky, the Greyhound line and the Lake Shore Coach Company. The Lake Shore buses succeeded the interurban trolley line that disbanded in 1938; their office was at 129 Columbus Avenue, in the former interurban station.The Greyhound station was across the street, at 124 Columbus Avenue. 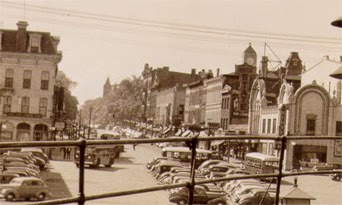 Jay Meek ran a drugstore in the old Graham drugstore building, at 102 Columbus Avenue, now home to Daly’s Pub. Across the street were the Seitz State Theatre building and the Stone’s Grill Restaurant just to the north of the theater.
Posted by Sandusky Library Archives Research Center at 2:19 PM No comments: