The March 19 Sandusky Star Journal reported that Nichols had only a “100 to 1” shot to win. Johnny defeated Dave Maier in the fight, but judge’s decision was not unanimous. Two referees voted for Nichols, but another judge, John Houghteling, cast his ballot for Maier. The crowd stood and cheered for Johnny Nichols when N.B.A. president John V. Clinnin linked the gold championship belt around the winner’s waist.

George “Johnny” Nichols was born in Sandusky to Italian immigrant parents. He did much of his boxing in Buffalo. The Sandusky Register Star News said in a 1957 article that Johnny Nichols fought from 1927 through 1937, sat out a year, and had one final fight in 1939. Nichols had boxed in many towns including Boston, Miami, Los Angeles, Denver, and Houston.

Variations in given names, surnames, and birth dates are all too familiar in family history research. Don’t rule out any data. The best thing to do is to keep a record of all the dates and spellings that are found, and document the source of each. Johnny Nichols was definitely born in Sandusky to Mr. and Mrs. Thomas Nicholas, but through the years names were changed. Johnny’s mother name was listed as Mrs. Ida Nicholas in her 1936 obituary, but Johnny’s name was listed as John G. Nichols with the Ohio Department of Vital Statistics at the time of his death in 1986.

An interesting sideline about Johnny Nichols is his brief marriage to Kit Klein. The New York Times reported in 1935 that the national speed skating champion had married George Nichols, a boxer from Sandusky, but they had never actually lived together.
Posted by Sandusky Library Archives Research Center at 10:58 AM 7 comments:

The Whig Party was active in the United States from 1834–1856, having been formed by those who were strongly opposed to the tyrannical leadership of Andrew Jackson. The Whigs elected two American Presidents, William Henry Harrison in 1841, and Zachary Taylor in 1849. Both Presidents died before their terms ended.

Several Erie County residents were active in the Whig Party. Joseph M. Root, who held many political offices throughout his career, was elected as a Whig to the twenty-ninth Congress of the United States. Judge E. B. Sadler and Homer Goodwin, a well known Sandusky lawyer, both started out their careers as members of the Whig Party.

Newspaper editor Oran Follett, pictured below, was a staunch Whig leader in the 1840’s. Sandusky’s first lawyer, Eleutheros Cooke, was elected to Congress as an anti-Jacksonian (later, Whig), serving from 1831 through 1833. An earlier blog entry describes William Henry Harrison’s visit to Sandusky in 1840 when he was the Whig presidential candidate. The ladies of the town created a special banner in his honor. The October 5, 1852 issue of the Daily Commercial Register lists the names of fifty members of the Common Council of the city of Sandusky, who were planning a reception for General Winfield Scott. The council members, without regard to party, planned to welcome General Scott to the “hospitalities of the city, on the occasion of his approaching visit.” Though Scott lost the election, he had a multitude of supporters in Sandusky.

Eventually the Whig Party fell apart due to disunity on the issue of slavery. Most Whigs in the Northern United States joined the newly formed Republican Party. An excellent article about early Ohio political life is found in Edgar Allen Holt’s “Party Politics in Ohio: 1840-1850” available online through the Ohio Historical Society.
Posted by Sandusky Library Archives Research Center at 10:36 AM No comments:

We haven't had a Mystery Photos posting in a long time, so let's have one now. Here is a photo of a railroad crossing in Sandusky. Do you recognize the location? Here are a couple of other scenes, in the same area. (I covered over the street signs in one picture, so you can't cheat!) The answer is in the comments section.
Posted by Sandusky Library Archives Research Center at 9:49 AM 7 comments: George J. Bing and his friends are pictured above with a biplane that George was towing to the frozen Sandusky Bay to test. Bing’s attempts to fly this plane failed.

Bing was one of Sandusky’s most prominent businessmen. He had a carriage shop on Tiffin Avenue. He outgrew his original shop, and constructed a large brick garage at 131 Tiffin Avenue, where he also sold and repaired automobiles. This building still stands today. (Currently the address is 317 Tiffin Avenue.)

An article in the September 21, 1906 Sandusky Register reported that Bing’s shop was “modern in every respect.” Bing’s motto was “Honesty is the best policy.”

George J. Bing attained the rank of sergeant in the Spanish American War, serving in the Ohio National Guard. George and Amelia Bing were married about 1907, and they had three children, Myrtle, Arthur and Ruth.

Sadly, George J. Bing and two other men died in an automobile accident on September 23, 1914, following a trip to the Sandusky County Fair in Fremont, Ohio. You can see more photographs of George J. Bing online at Lake Erie’s Yesterdays and the Ohio Memory Online Scrapbook.
Posted by Sandusky Library Archives Research Center at 4:12 PM No comments:

Olde Broderson was born in Germany in August of 1888 to Carsten and Catherine Hansen Broderson. The family emigrated to the United States in 1890. By 1900 the Brodersons had a family of eight children and resided in Sandusky. 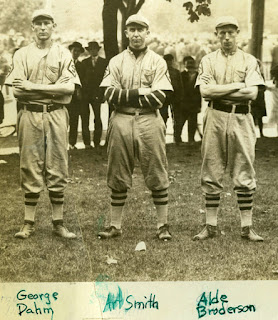 Olde’s job was at the car shops of the New York Central Railroad, but in his free time he loved to play baseball. He was a member of several different area teams throughout the years, playing for the Shamrocks from about 1911 through 1914. A columnist for the Sandusky Star Journal wrote in 1921 when Olde played for the Griswold-Wags team, “We’ve been watching Broderson play ball for several years, been amazed at the unusual sight of seeing a man improve with every season and often wondered if 'Brod' hadn’t discovered that spring of perpetual youth that Balboa, or maybe it was Ponce De Leon, went after.”
On the afternoon of Sunday, June 21, 1925, Olde Broderson was in the lineup as catcher for the Kelleys Island baseball team the Chinks. In the seventh inning, Suhr, the third baseman for the opposing team, was on third base, and attempted to slide home on a base hit. Olde was trying to block Suhr’s run for a score, and the two players collided. Olde received internal injuries from this accident. His teammates escorted him home on the steamer Chippewa. Olde remained in constant pain, and died the following day.

Olde’s obituary said that he was “one of Sandusky’s oldest active baseball players.” Six members of the Chinks team served as pallbearers at the funeral. Representatives from all Sandusky baseball teams attended the funeral services, where a huge floral tribute honored Olde.

Olde Broderson is buried at Oakland Cemetery. He was survived by his wife and three sons, seven siblings, and both his parents. He was sadly missed by his family and friends.
Posted by Sandusky Library Archives Research Center at 3:22 PM 1 comment: April is Jazz Appreciation Month; March was Women's History Month. Here is a picture that combines the two occasions. They are the Harmonettes, an all-woman band that performed in Sandusky during the late 1920s. In the band were Florence and Thelma Brengartner, Dorothy Hartsook, LaVesta Muenchow, and Marcella and Hildegard Erney.
[Edited to add a missing name.]
Posted by Sandusky Library Archives Research Center at 3:04 PM 4 comments:

Emily St. John Bouton was the daughter of Daniel Bouton and Almina St. John. Born in Connecticut in 1837, Emily moved with her family to Sandusky as a young girl. Her brother Charles would one day become Mayor of Sandusky. Emily was in the very first graduating class of Sandusky High School in 1855. (She went by the first name of Emma at the time of her graduation.) After graduation Emily taught school in Milan, Tiffin, and Toledo. From 1879 to 1907, she was the literary and household editor of the Toledo Blade. She contributed a waffle recipe to The Woman Suffrage Cook Book. In the late nineteenth century, Emily S. Bouton wrote books about etiquette, health and beauty. She was well respected as a writer and literary critic. Her works are in the Ohioana Collection and several university libraries. In a collective biography entitled American Women the authors wrote that Emily S. Bouton had “an almost unlimited capacity for work.”

Emily S. Bouton’s obituary appeared in the February 10, 1927 issue of the Sandusky Register. At the time of her death, she had been the oldest living graduate of Sandusky High School. See Ohio Authors and Their Books to read brief sketches about Emily S. Bouton and hundreds of Ohio noteworthy authors.

For similar stories about Sandusky authors, come to the library's program, Sandusky's 19th and early 20th Century authors, on Saturday, April 19, at 2PM.
Posted by Sandusky Library Archives Research Center at 11:47 AM No comments: