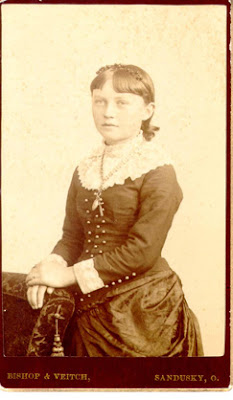 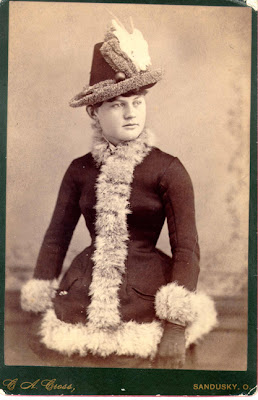 This lovely picture of Katie Rittman as a young woman was taken at the Pascoe studio in . 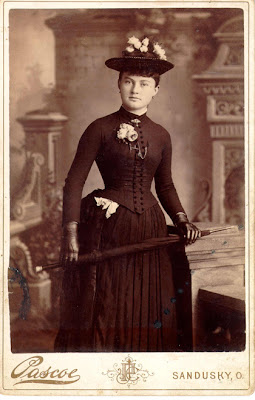 U.S. Census records indicate that Katie lived with her parents in 1880 and 1900. On February 4, 1902, Katie Rittman married Charles Hoffman, who was employed at the Hoffman family business, the Hoffman Coal and Milling Company. Charles and Katie were the parents of three daughters and a son.  In 1919 the Charles Hoffman family operated a store at the corner of Scott and Hancock Streets. "Puck," a zinc statue that had once been in the store window of Dietz & Mischler's cigar shop, stood on the roof of the Hoffman business for several years. Puck is now housed at the . Katie Rittman Hoffman passed away in 1929, and Charles Hoffman died in1933. Mr. and Mrs. Hoffman were both buried in . 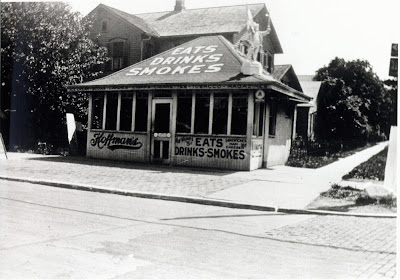 Posted by Sandusky Library Archives Research Center at 9:53 AM No comments:

In the yellow pages of the current Greater Sandusky telephone book are listings for dozens of local Social Service agencies that help people who have a variety of needs. Some groups provide emergency food or shelter, others offer assistance to senior citizens, and some local organizations assist those with specific medical needs. Charitable organizations have been in operation in the Erie County area for many decades. During the Civil War, the Ladies’ Soldiers’ Aid Society of Grace Church sent food and supplies to soldiers, which were greatly appreciated. Prior to the Civil War, fugitives on the Underground Railroad often found food and shelter from hospitable individuals in Erie and Huron Counties. Pictured below are women in the surgical dressing class taught by the American Red Cross during World War I. 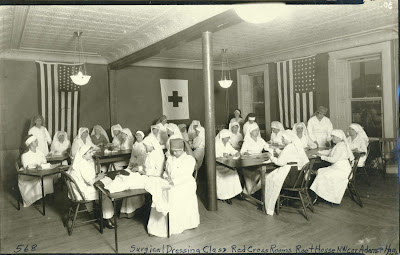 In the 1920s, the Salvation Army sponsored shoe drives for needy individuals in the area. 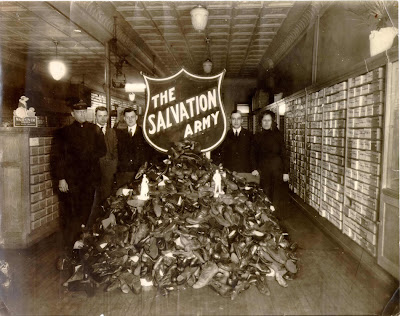 The group below was photographed in Sandusky’s American Red Cross headquarters in the 1930s or 1940s. 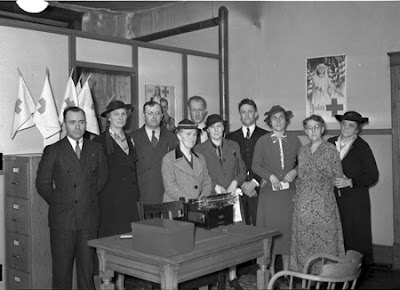 During World War II, local residents conducted scrap drives and planted victory gardens in support of the war effort.  Throughout history, members of area churches, clubs, and businesses have all joined together to help others in times of need. See the website of the United Way to see historical information about the many members of their organization, which started in 1923 as the Sandusky Community Fund.
Posted by Sandusky Library Archives Research Center at 3:48 PM No comments: 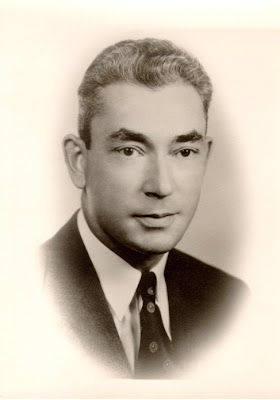 Alton T. Young, known as “Al,” served as Erie County Sheriff for four terms, from 1948 to 1964. During Sheriff Young’s tenure, he was connected with several interesting ways to enforce the law. He formed the Erie County Sheriff’s Posse in 1962. Volunteers on horseback assisted in conducing manhunts and missing people searches. He also employed a canine “snooper,” which had been a gift from the Lorain County Sheriff. During the years that Sheriff Young was in office, his family lived in the Erie County Jail. 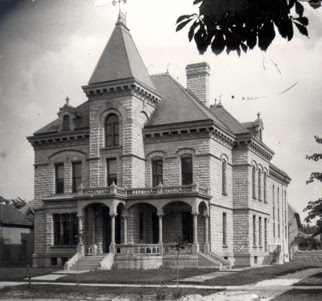 Featured in the book Elected to Serve  by Patty Pascoe, are several recollections of the children of Sheriff Young. His daughter recalled that the cooks who prepared meals for the prisoners also prepared meals for the Young family. When the stairs of the Sandusky Library were iced over, the Sheriff’s children would slide down the stairs on a sled. The Young children got to know the employees and the residents of the Erie County jail. They never felt they were in danger, even though they resided at the same place as those who had been incarcerated.

In 1964, Al Young ran for a fifth term as Erie County Sheriff, but was defeated by Albert H. Hess. Mr. Young moved to Arizona, where he died at the age of 80. To read more about elected officials in Erie County, Ohio from 1838 to 2003, see Elected to Serve at the Sandusky Library.
Posted by Sandusky Library Archives Research Center at 2:24 PM No comments: 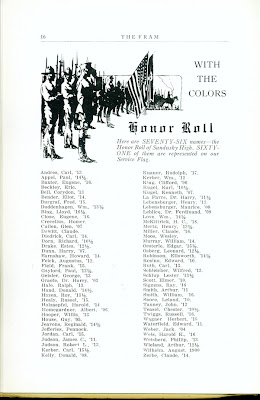 The April 1918 issue of the Fram featured the names of seventy-six individuals who had either attended or graduated from Sandusky High School, and were serving in military service during World War I. The names were arranged alphabetically by surname, with the year of graduation listed after the name. 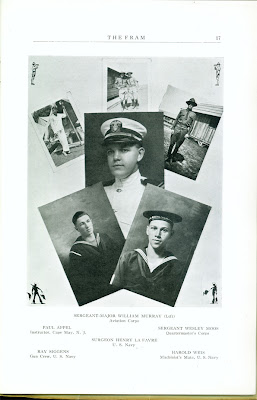 Opposite the “Honor Roll” listing of names was a page with pictures of several military men from Sandusky. Sergeant-Major William Murray was serving with the Aviation Corps of the U.S. Army.  Paul J. Appell was an instructor at Cape May, New Jersey with the U.S. Navy. Sergeant Wesley Moos was with the U.S. Army’s Quartermaster’s Corps. Ray Siggens, Harold Weis, and Surgeon Henry LaFavre were all serving in the United States Navy. La Favre, whose picture is in the center of the page, served as a U.S. Navy surgeon in both World War I and World War II. Eventually he retired to Virginia Beach. After his death on February 15, 1953, Captain La Favre was buried at Arlington National Cemetery.
Posted by Sandusky Library Archives Research Center at 3:33 PM No comments: 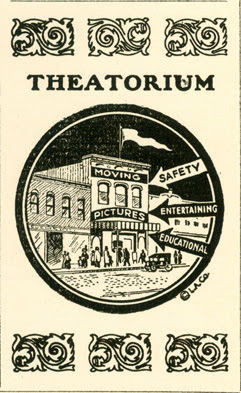 Karl Kurtz wrote in the July 23, 1977 issue of the Sandusky Register in his “Elderlies” column that the first silent movie shown in the area was The Great Train Robbery. Veteran newspaper man and showman Dave Wood brought the celluloid melodrama to in 1905 and showed it at Cedar Point. The first motion picture house in was called the Theatorium, established in 1906. It was located on between the old Post Office and the Firehouse. 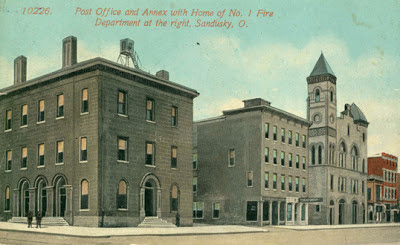 Charles Reark was the first manager of the Theatorium. He showed first-run silent movies, with eight changes a week. An article from a 1909 issue of The Moving Picture World stated that “Proprietors of moving picture theatres throughout who have visited Mr. Reark's cozy theatre state that he has the brightest and clearest pictures in the State. Ushers seat the patrons, a new light system has been installed, and no expense is spared to give the amusement goers of the best of entertainment at this theatre for five cents admission.” Five Hallberg arc lamps “turned night into day” at the front of the theater. An article from the Sandusky Register of February 6, 1927, reported that the Theatorium was a long narrow room, with low ceilings and poor ventilation. By January 1907, the Theatorium had 140 seats which were all elevated. Besides the main feature of a silent movie, audiences were often treated to the attraction of an illustrated song. A soloist would sing the song played by the pianist, as colored slides were projected on the big screen. The singer would repeat the same song to several audiences each day.

For many years, Manager Charles Reark had a special program at the Theatorium for members of the Sandusky Newsboys’ Association. On Thanksgiving, the newsboys were treated to a silent movie at the Theatorium between 10 a.m. and noon. The newsboys just had to show a badge or membership card for admission to the free show. On Christmas Eve and Christmas Day in 1907, souvenir Christmas cards were given away to everyone in the audience. Songs were performed by A.L. Taylor and George Upp. The movies shown that Christmas were The Wonderful Mirror, The Dog Hero, and Thieves Caught in Their Own Trap.  Later owners of the Theatorium included Gustavus Dildine and Voltaire Schweinfurth. The Theatorium closed in May of 1917, but it brought many an evening of entertainment for residents of the area for over ten years. 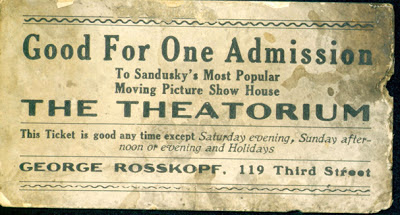 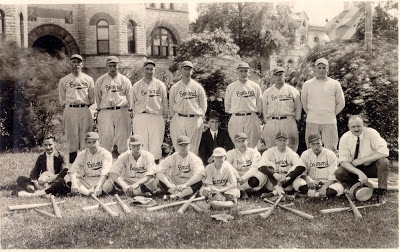 The Esmond Dairy baseball team is pictured above on the grounds of the Ohio Soldiers’ and Sailors’ Home. In the 1920s, the Esmond Dairy sponsored baseball, football, and basketball teams. An article in the May 15, 1922 issue of the Sandusky Star Journal reported that the baseball fields at the Ohio Soldiers’ and Sailors’ Home were a big improvement over the baseball field at Huron Park, where they had been playing. While we do not know exactly which players are in this photo, you can read about historical baseball games played in on microfilmed copies of the Sandusky Register and the Sandusky Star Journal at the . 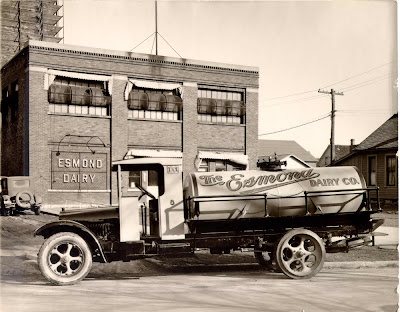 From about 1919 through the 1970s, Esmond Dairy was located at in .
Posted by Sandusky Library Archives Research Center at 2:52 PM No comments:

The Lagoons at Cedar Point 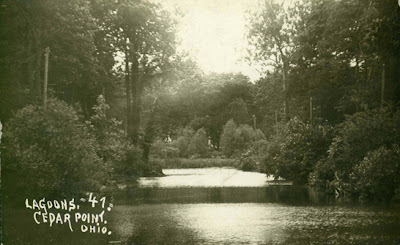 Around 1904, under the direction of G.A. Boeckling, the Detroit Dredging Company drained the marshy areas of the Cedar Point peninsula, to create a water passageway throughout the park. Through the years, the lagoons were used by park visitors who rented canoes, rowboats, power boats, and pedal boats to travel through the lagoons. 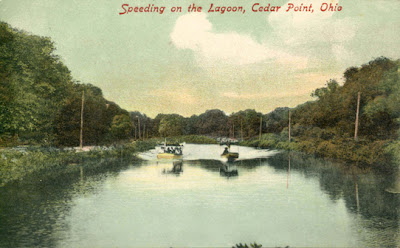 The lagoons were a popular feature of Cedar Point for many decades. 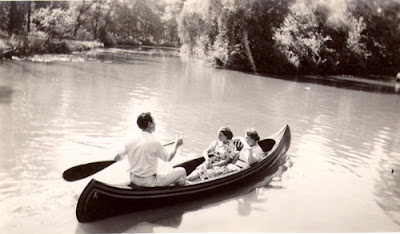 In the early 1960s, the Western Cruise boats, later known as Paddlewheel Excursions, took park guests on a pleasant ride through the lagoons. 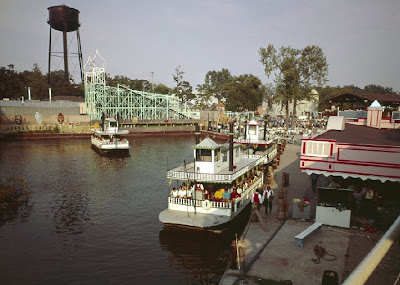 Paddlewheel Excursions closed at the end of the 2011 season at Cedar Point, to make way for the Dinosaurs Alive attraction.
Posted by Sandusky Library Archives Research Center at 9:54 AM 1 comment:

Join us in the Library Program Room for a talk about military tactics at the Battle of Gettysburg, presented by George Vourlojianis, professor of History at Lorain County Community College. Dr. Vourlojianis has also taught at Kent State University, and is a past president of the Cleveland Civil War Roundtable and past trustee of the Cleveland Grays Armory Military Museum, the Cuyahoga County Soldiers and Sailors Monument and the Lorain County Historical Society. He spoke recently at the Sandusky Library about Tecumseh and the War of 1812.
Posted by Sandusky Library Archives Research Center at 4:14 PM No comments: 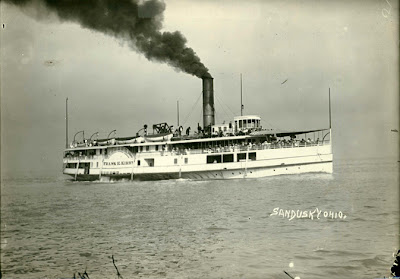 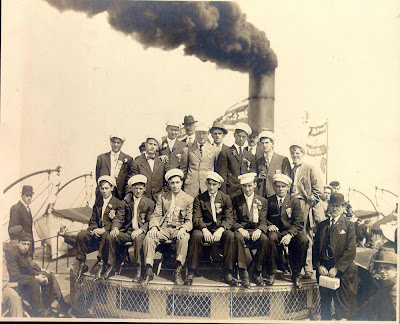 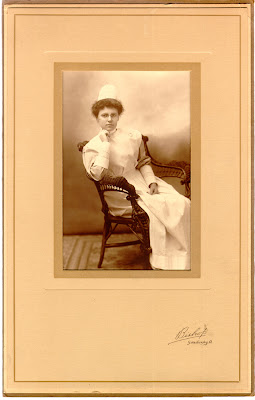 Miss Rose Ball was born May 4, 1877 in Reed Township, Seneca County, Ohio. An article in the February 20, 1926 issue of the Sandusky Star Journal stated that Rose Ball was a well-known nurse, having graduated from Providence Hospital School of Nursing. U.S. Census Records list Rose’s occupation as a nurse in 1910, 1920 and 1930. She resided in Sandusky, Ohio during these years. In October of 1933, Rose Ball was on the featured speakers at the banquet of the Nurses’ Alumnae Association of Providence Hospital, which was held at the Hotel Rieger. After having been in poor health for several years, Miss Rose Ball died on September 6, 1956 in Tiffin, Ohio. Though we do not know the exact year of Rose’s graduation from nursing school, this is how Providence Hospital looked in 1910. The facility formerly known as Providence Hospital is now the South Campus of Firelands Regional Medical Center. 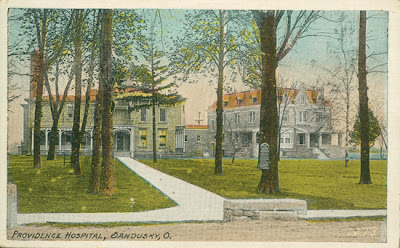 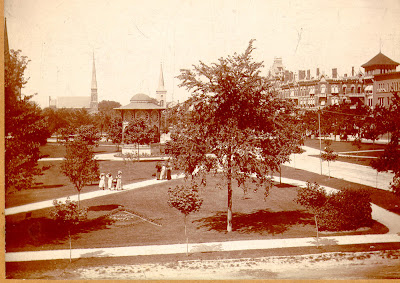 This photograph from the Sandusky Parks Collection of the Sandusky Library Archives Research Center was taken in 1895. The clothes of the people walking in Washington Park are typical of the Victorian era, with long skirts for the ladies, and everyone wearing hats. 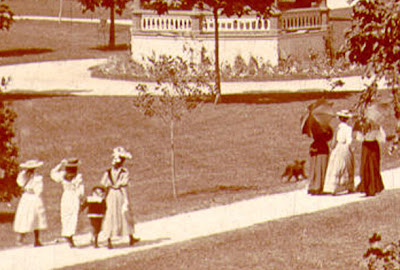 The church spires, seen on either side of the gazebo, are from the Methodist church, on the left side, and the Presbyterian church, on the right side. The Presbyterian church is still located in downtown Sandusky, but the Methodist church is not. Trinity Methodist Church relocated to the corner of Wayne and East Jefferson Streets in the 1920s.  The Sloane House hotel and Kingsbury block can be seen to the north of Washington Park. Visit the Sandusky Library Archives Research Center to view this and hundreds of other historic photographs of Sandusky and Erie County.
Posted by Sandusky Library Archives Research Center at 2:24 PM No comments: