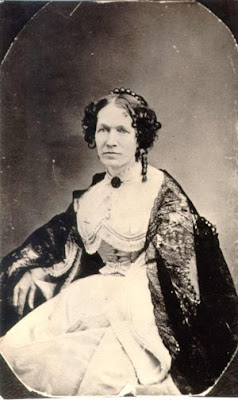 Lydia Mahala Todd was born in 1824 to Amos and Lurana Strong Todd in Cortland County, New York, and moved to Sandusky as a youngster. In 1844, Lydia married William T. West, a Sandusky merchant, and co-owner of the West House. Their wedding was the first wedding in the upper part of Grace Episcopal Church. In 1892, William T. West built the Mahala Block on East Washington Row, and named it after his wife’s middle name.

During the cholera epidemic of 1849, Mrs. West was a hard worker, and helped to alleviate the suffering of those taken ill. She gained a reputation for kindness to the soldiers during the Civil War. The December 25, 1902 Sandusky Register reported that “in later years charity and aiding the poor and needy have been her main objects.”

Mrs. Lydia Mahala Todd West died on Christmas Eve in 1902. Her obituary was headlined with the phrase “Death of an Esteemed Lady.” The funeral services for Mrs. West were largely attended, and many floral tributes were sent. The active pallbearers were four African American employees of the West House Hotel. Among the mourners at her funeral was Ban Johnson, president of the American Baseball League. While it is not known how they met, the Sandusky Evening Star stated that Ban Johnson knew Mrs. West well. Mrs. West was survived by her husband William T. West, and her children: Mrs. C. L. Hubbard, Mrs. W. B. Jordan, George C. West, and William G. West. Burial was in Oakland Cemetery.

Pictured below is the wedding handkerchief of Mrs. Lydia Mahala Todd West, from the collections of the Follett House Museum. 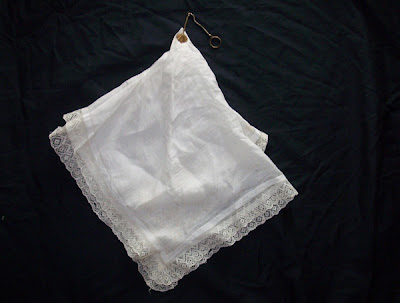 Posted by Sandusky Library Archives Research Center at 11:54 AM No comments:

On Tuesday, December 21, 1926, the Sandusky Kiwanis Club hosted a party for forty-five children from the Erie County Children’s Home. The festivities took place at the chapel of the First Presbyterian Church. Each club member was responsible for one of the youngsters’ gifts. 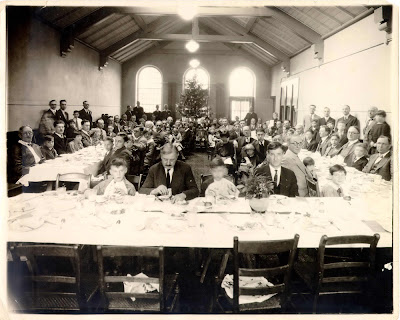 J. F. Starkey, dressed as Santa Claus, gave each child a gift of candy, nuts, and oranges. Christmas carols were sung by all. Heenan Elliott entertained the children by doing impersonations. At the end of the luncheon, the children sang a song of thanks to the Kiwanians.

In 1926, Mr. and Mrs. John Ritter were in charge of the Children’s Home. The committee responsible for the Kiwanis Christmas program was made up of: W. P. Bittner, Dr. A. J. Funnell, and Dr. H. L. Brown. Mrs. Clara “Ma” Bock, the club’s caterer (pictured below), was given a pin by the Kiwanis Club members at the Christmas party. 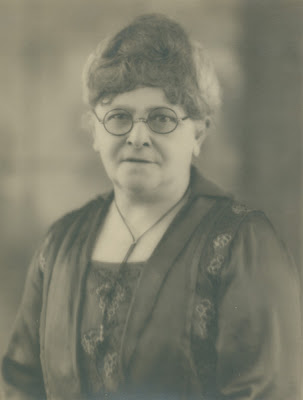 At the time of the Kiwanis Christmas Party, the children whom they hosted resided at the facility pictured below. The Erie County Children’s Home opened at its Sycamore Line location in May, 1901. The home closed in 1960 because of increasing operating expenses to maintain a facility not filled to capacity. The photo below was taken by Robert E. Frank, when the building housed offices for Erie County’s Sanitary Engineering division. The former Children's Home building is now privately owned. 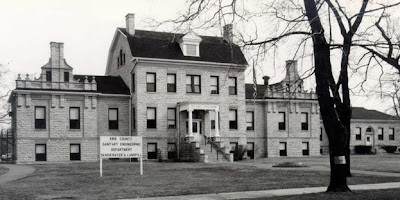 Posted by Sandusky Library Archives Research Center at 11:36 AM 8 comments: 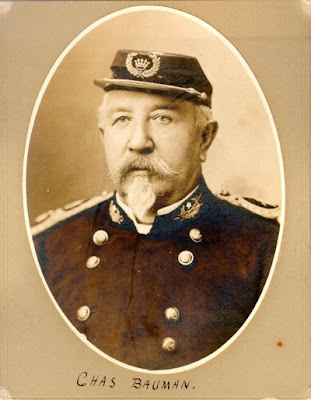 Charles Bauman was born in Ehrenstetten, Baden, Germany in 1835, and came to Sandusky when he was eighteen years old. Mr. Bauman was engaged in the wall paper and decorating business in Sandusky for forty-nine years. During the Civil War, Charles Bauman enlisted in Company F of the 107th Ohio Volunteer Infantry.

Music was important to Charles Bauman. He was a member of the old Great Western Band, and was leader of the Germania Reed band. For a time he was also associated with Ackley’s Band. On August 17, 1902, the Sandusky Register reported that Ackley’s Band serenaded Mr. Charles Bauman on the occasion of his sixty-seventh birthday. The band arrived at the Bauman residence on South Decatur Street shortly after midnight. After the band played several selections, they were invited in for refreshments. When Mr. Bauman and his wife celebrated their golden anniversary on December 7, 1906, Charles was quite ill. Although he was sick, his wish was gratified.

Charles Bauman died on December 16, 1906. He left behind his wife, five sons, and six daughters. Charles Bauman was buried at Oakland Cemetery. In the photograph above, Charles Bauman is wearing a uniform. He had been a member of the I.O.O.F. as well as the G.A.R., but the uniform does look similar to the Knights of the Maccabees uniforms of the 1890’s. If you know the exact type uniform pictured in the portrait of Charles Bauman, please leave a message in the comment area of this blog post.
Posted by Sandusky Library Archives Research Center at 9:51 AM 1 comment:

While the photographer remains unknown, above are five different poses of Wilma Fernau, who was born in 1902. Wilma was the daughter of Henry and Elizabeth Fernau, who were both born in Germany. One pose features Wilma reading a magazine; another shows Wilma on the telephone, which was a relatively new device in the early twentieth century. The Sandusky City Directories list Wilma’s occupation as a stenographer. Wilma Fernau never married. She passed away on December 28, 1980 in Sandusky, Ohio. She is buried in the family mausoleum at Oakland Cemetery.

Email ThisBlogThis!Share to TwitterShare to FacebookShare to Pinterest
Labels: Fernau

According to the second edition of the Random House Unabridged Dictionary, the definition of a “five-and-ten” (also called “five-and-ten-cent store”) is “a store offering a wide assortment of inexpensive items, formerly costing five or ten cents, for personal and household use.”

From the nineteen thirties through the nineteen sixties, Sandusky had several five and ten cent stores. In July of 1919, the S. S. Kresge Five and Ten Cent Store leased the southeast corner of Market and Columbus Avenue for twenty five years. By 1941, there were two Kresge stores in Sandusky, both on Columbus Avenue. In 1941, Neisner Bros., Inc. was located at 133 E. Market Street, opposite the Feick Building. The 1962 Sandusky City Directory, under the section “Department Stores – 5 cents to $1.00.,” listed the W. T. Grant Store at the Sandusky Plaza, the S. S. Kresge Co. at 202 Columbus Ave., Neisner Bros, at 133 E. Market St., and two Woolworth stores, one at 220 Columbus Ave. and one at the Sandusky Plaza. 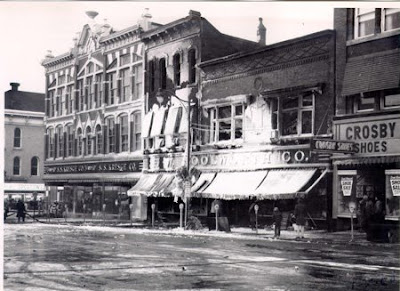 Views of the interior of the S.S. Kresge Co. in 1930 show a lunch counter, and several items for sale for under one dollar. 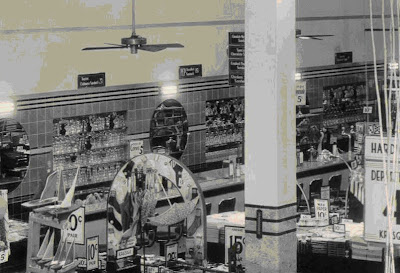 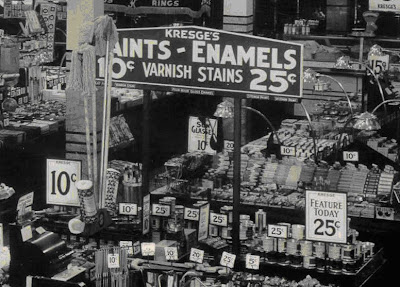 Today the five and ten cent stores are just a memory, while larger discount stores and department stores are found along Route 250 in Perkins Township. Library staff members recall watching donuts being made at the downtown Sandusky dime stores, buying candy before seeing a movie, seeing counters filled with household items, buying paper doll and coloring books, and grabbing a sandwich and a coffee at the lunch counter. If you have memories of the old Sandusky five and ten stores, please leave a comments section of this blog posting.
Posted by Sandusky Library Archives Research Center at 11:51 AM 13 comments: 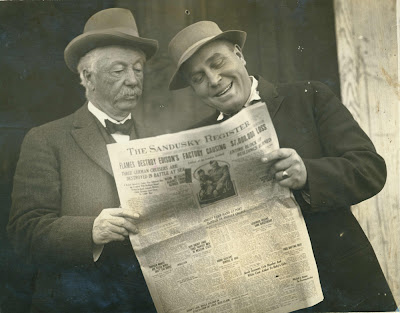 Two men are reading the Sandusky Register in December 1914. The front page headline story was about the fire which destroyed Thomas Edison’s factory in West Orange, New Jersey on December 9, 1914.

In the Archives Research Center at Sandusky Library you will find hundreds of reels of microfilmed copies of local newspapers, including the city's first newspaper, the Sandusky Clarion, founded in 1822, and its descendant, the present Sandusky Register. While there is no comprehensive index, you can view the “Charles E. Frohman Index to the Sandusky Register and Star Journal”, which is a selective index to our newspaper collection, covering roughly 1840-1975. Since the films are arranged chronologically, searching the newspapers by date is easily done.

You can find details about the social, political, business, and educational activities of area residents from the years in which they lived here. Interesting facts about your ancestors can help add human interest to the genealogical data you already have collected.

In old newspaper ads, it is fun to note how the styles and prices have changed throughout the years. 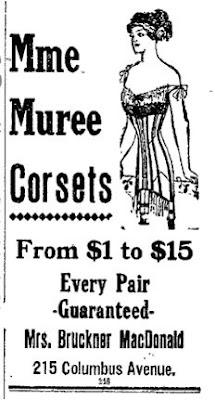 Posted by Sandusky Library Archives Research Center at 9:19 AM 1 comment: