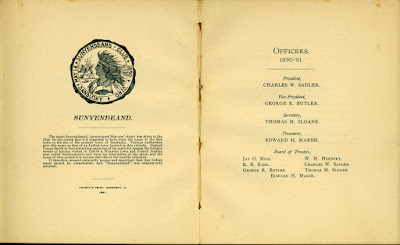 During March 1890, a group of Sandusky men met to discuss establishing a club “of social character for gentlemen.” The second meeting was held March 29, 1890, and the club was officially formed. The club’s objective was to “promote social intercourse among its members, and to provide them with the convenience of a Club House.” Thomas M. Sloane was elected chairman. The men leased club rooms in the Masonic Temple, on Wayne Street at the corner of East Washington Street.

The club’s name was chosen based on accounts that Sunyendeand was the name given to the first settlement on the site of present-day Sandusky. According to Colonel James Smith’s description of his captivity by Native Americans, he visited a Wyandot village and French trading post between 1756 and 1758. Smith indicated this area was referred to as Sunyendeand. The men’s club wished to carry on the historical name.

Membership was limited to males, 21 years of age or older, residing in Sandusky or within two miles of the city. Perspective members were elected by club members and owned one share of stock (no member owned more than one share). Non-residents of Sandusky could become members but could not be stockholders or voting members of the club. Some well-known club members included G. A. Boeckling, W. A. Bishop, T. Pitt Cooke, and members of the Sloane family. 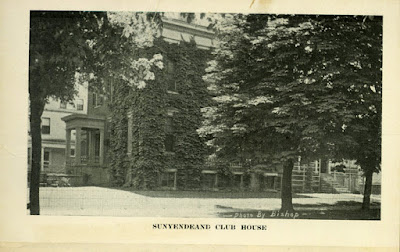 In 1910, the club needed a larger club house, so property on the corner of Wayne and Jefferson streets was purchased, remodeled, and furnished. The new house provided dining rooms, bedrooms, writing rooms, a billiard room, and meeting areas. It was designed to meet the needs of business men. The club house was open daily from 7 a.m. to midnight and from 8 a.m. to 10 p.m. on Sundays. Visitors could be invited into the club house, but residents of Sandusky who were not members of the club were not permitted to use the club rooms. Because it was a social club, an Entertainment Committee was responsible for various activities including lectures, music, and family events. “Smokers” were also a part of the club’s activities and involved speakers. 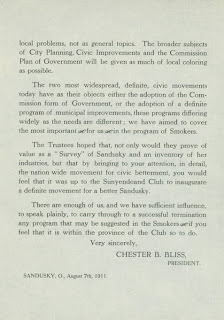 Although it is not clear exactly when the club disbanded, it was probably around 1930, as the last Sunyendeand document in the library's collection is dated from that time. The club had voted to dissolve in 1924, but this vote was rescinded after a group of members voted to purchase the club property and continue operation.
Posted by Sandusky Library Archives Research Center at 3:00 PM