This portrait was taken about 1911 by C.W. Platt in Sandusky, Ohio. It was filed in a collection of unidentified photographs at the Archives Research Center of the Sandusky Library, but was recently identified as being a photo of Steen Leroy Parker, by a family member. 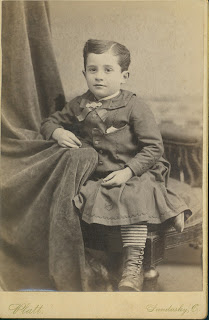 Steen Leroy Parker was born January 30, 1908 in Sandusky, Ohio, to Leroy and Ada (Steen) Parker. His first name was the family name of his mother’s family of Irish heritage. Steen’s siblings were Glenn, Janet, and Paul Parker. Steen Parker’s family had a farm in Perkins Township, which had to be vacated when the U.S. Government built the Plum Brook Ordnance Works in Perkins Township in 1940. Besides working on the family farm, Leroy Parker was also a concessionaire at Cedar Point, fondly remembered for working many hours at Noah’s Ark, one of the attractions operated by the Concourse Amusement Company.

In the 1920’s Steen graduated from Sandusky High School. He served in the Seabees during World War Two. Steen Leroy Parker is pictured below with his first wife, Doris Wheeler Parker. 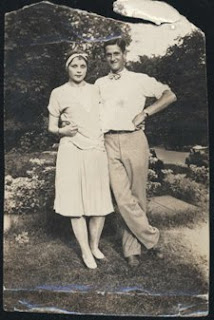 After the death of Doris, Steen married Ruth Renwand. He died in 1949, leaving his widow, five children, and two grandchildren.

Email ThisBlogThis!Share to TwitterShare to FacebookShare to Pinterest
Labels: Parker

I have this second picture of Steen Parker in my family's history. This was the Renwand family. We have several pictures of them that indicate they may have been a fairly wealthy family in Sandusky. Does anyone know their history?

Steen Parker's father was Leroy Parker, an Erie County Commissioner. They were not wealthy, but lived comfortably. Steen's first wife died, and his second wife's maiden name was Renwand.

See this url for information about the father of Steen Parker, in Peeke's Standard History of Erie County: